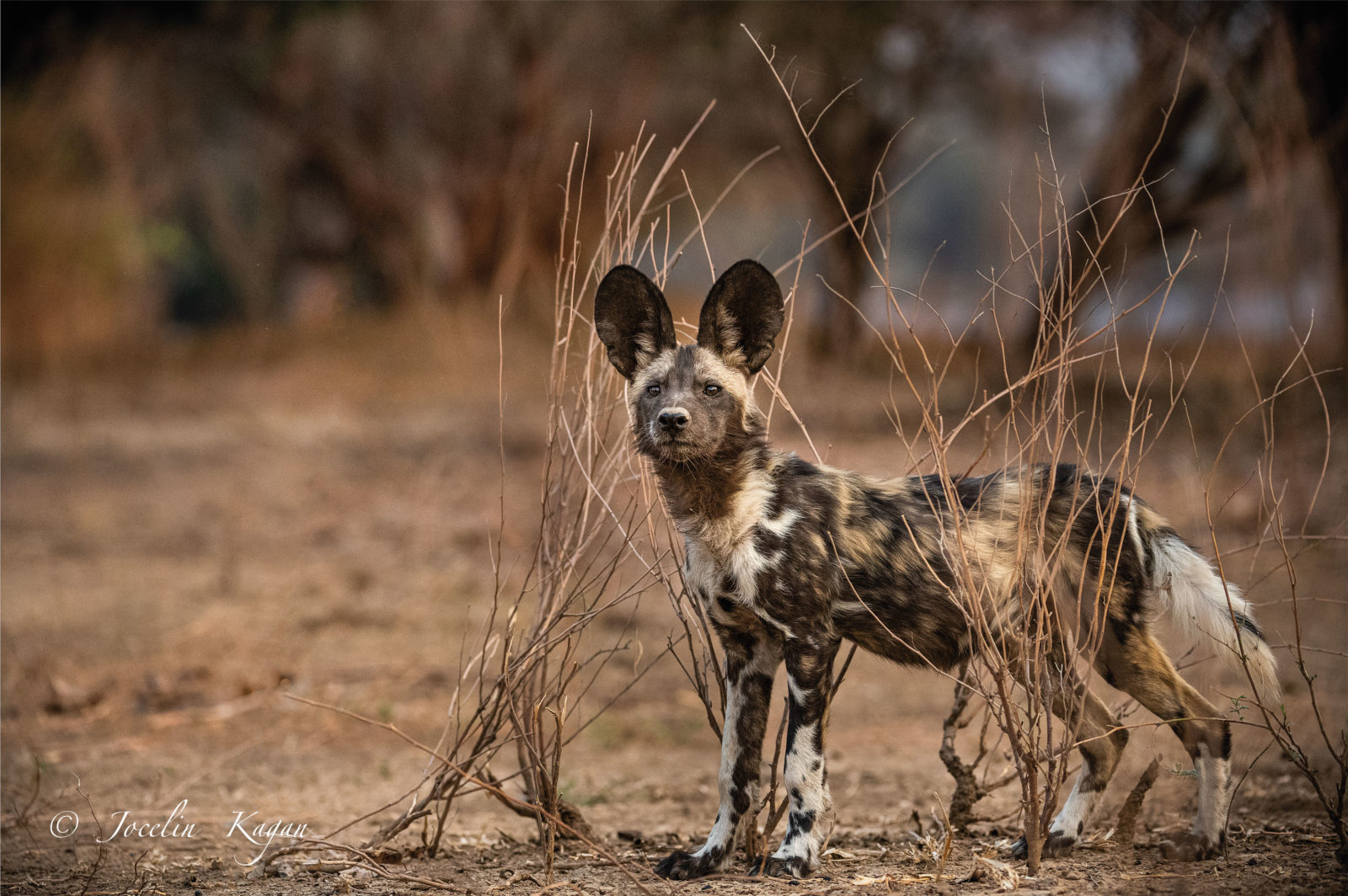 I had a natural affinity with dogs. That served me well, to win the trust of Africa’s threatened 'painted' dogs. The result was some extraordinary photographs.

At five months, this African wild dog pup projects a tangible sense of self-assurance despite his youth. His huge ears turn like satellite dishes searching for a signal as he looks deep into my eyes. His own dark eyes seem to ask, ‘Who are you?’

Reluctant to disturb my new friend – and even more so to fracture the fragility of our newly-formed bond – I lie flat, camera poised, and press the trigger.

Unperturbed, and as if expecting me to embark on a portrait shoot, the pup poses, turning his head, giving me his best profile. The result is the cover shot of my book, Africa’s Wild Dogs.

He is not alone. Two of his litter-mates take their cue from him, creep closer and sit. He’s clearly the leader of the three. His eyes gleam with extraordinary interest and awareness. He looks, sniffs the air and it seems he would be tempted to come closer still, had a short, quiet bark from a nearby adult not warned him against it.

Do I feel afraid? Not at all. I feel exhilaration at having these predators so close to me. I’m humbled that they chose to be here of their own volition. Questions race through my mind. Is this wild predator something to be feared? Why are they so calm in my presence? Why don’t they attack me? I keep watching, but get no answers to my questions.

From deep silence within, a realisation forms and is to shape a new chapter in my life. My ‘aha’ moment as emotion and intellect come together in a flash is clear: I have to help reverse the wild dogs’ diminishing numbers. These animals – actually all animals – deserve a deeper and greater respect than they currently receive.

Through photography, over the years, I’ve learnt to read their ways, listen to their conversations, observe behaviours and accept their table manners.

I’ve met elephants in Tsavo National Park, Kenya, and felt the exploring touch of an enormous matriarch’s trunk. I’ve lugged kilos of camera equipment across crevasses and broken ice in -400C in Antarctica to photograph emperor penguins and their chicks. And I’ve braced myself against a blizzard in north-east Canada photographing polar bear mothers with their mischievous cubs.

I’m extremely fortunate and have loved each of these encounters more than I can express. But the African wild dog captured my heart. It’s an animal that goes by many names – African painted dogs, painted wolves, African hunting dogs, Cape hunting dogs…

Is it a dog or a wolf? The scientific classification has caused historic confusion and is the subject of ongoing debate. Back in the 1820s, Dutch zoologist Coenraad Temminck, Director of the Leiden Museum, erroneously declared the hyaena and wild dog to belong to the same genus and named it Hyaena picta (painted hyaena).

Seven years later, British naturalist Joshua Brookes reclassified the wild dog as a canid, renaming it Lycaon tricolor (Lycaon from the Greek meaning wolf-like and tricolor the Latin for its three-coloured coat). Later the pictus was returned to the dog. The argument whether this is ‘wolf’ or ‘dog’ continues.

To me they’re born who they are and that’s that. They are beautiful, intelligent, iconic animals integral to the ecosystems of the African bush.

As research into the wild dog grows, we’re constantly learning just what remarkable, non-confrontational, inquisitive and self-determined predators they are. Their complex social structure bonds members of their family, helping to ensure their survival and their dynasty.

But they’re in trouble. They once ranged widely in large packs throughout sub-Saharan Africa. Now they are restricted to small populations in a few countries in southern Africa and in some are declining rapidly.

In 2016, they were classified as endangered by the International Union for Conservation of Nature (IUCN). Despite declarations of legal protection, they still face a multitude of threats, including deliberate eradication. These include a ‘shoot to kill’ policy from some farmers, habitat fragmentation, diseases from domestic dogs, climate change, accidentally being trapped in snares set for the bushmeat trade and direct predation from growing populations of other larger, more aggressive predators such as lion and hyena.

There are only around 6,600 African wild dogs left in the world – a decline that cannot continue. Through Africa’s Wild Dogs – A Survival Story, I show and share what I have experienced and what I have learnt about these fascinating creatures. I’ve always felt comfortable with the dogs, there’s an affinity they seem to sense. I’m unafraid and they seem happy to be up close. I’ve watched their lives and come to know them, even some as individual characters I know by name. I watched the tender moments as they rear their pups, the joy when they meet and greet each other, the visceral thrill of the chase as they hunt.

It gives me an extraordinary sense of freedom to be in the wild with the dogs. I’m a city girl experiencing the buzz and excitement of running over the bushveld struggling to trail the dogs. I’m of the age when I should be calming down, but racing across the dust with wild dogs awoke something regenerative in me.

My professional background as a communication consultant trained me to be observant of humans and I apply that skill to wildlife watching. I notice micro-movements – their expressive eyes, the muscular tension rippling under their painterly coat, the head and tail positions and the eloquence of those enormous ears. I listen. Though the dogs are generally very quiet, I’ve learnt to discern the range and meanings of their soft vocalisations.

They are sleek, fast and graceful. When they run they fly! They seem to levitate over the rough ground when hunting or being chased. They are intelligent, solving problems collectively and skilfully as they corner and capture their prey, or evade predators.

They care for each other throughout their lives with demonstrative affection in their close-knit, strictly-ordered family groups. They have huge fun in their lives and play relentlessly, inventively and enthusiastically. They’re ever alert and endearing, with their expressive eyes, faces and satellite-shaped ears. It goes without saying they are wonderful to watch and there is no historic record or folk tale of a wild dog ever having attacked a human.

My hope is that my work contributes further insight and understanding to a growing global interest in African wild dogs. I know there are people like me who can watch wildlife from the gentle hues of pre-dawn to the magic hour when dusk transforms into night. I long to show them the painted dogs of Africa. DM/ ML

Three friends and I have created a non-profit organisation: Africa’s Wild Dog Survival Fund, which will receive all royalties from sales of this book and proceeds from my photography exhibitions and talks to be used in the protection of these beautiful painted wolves.