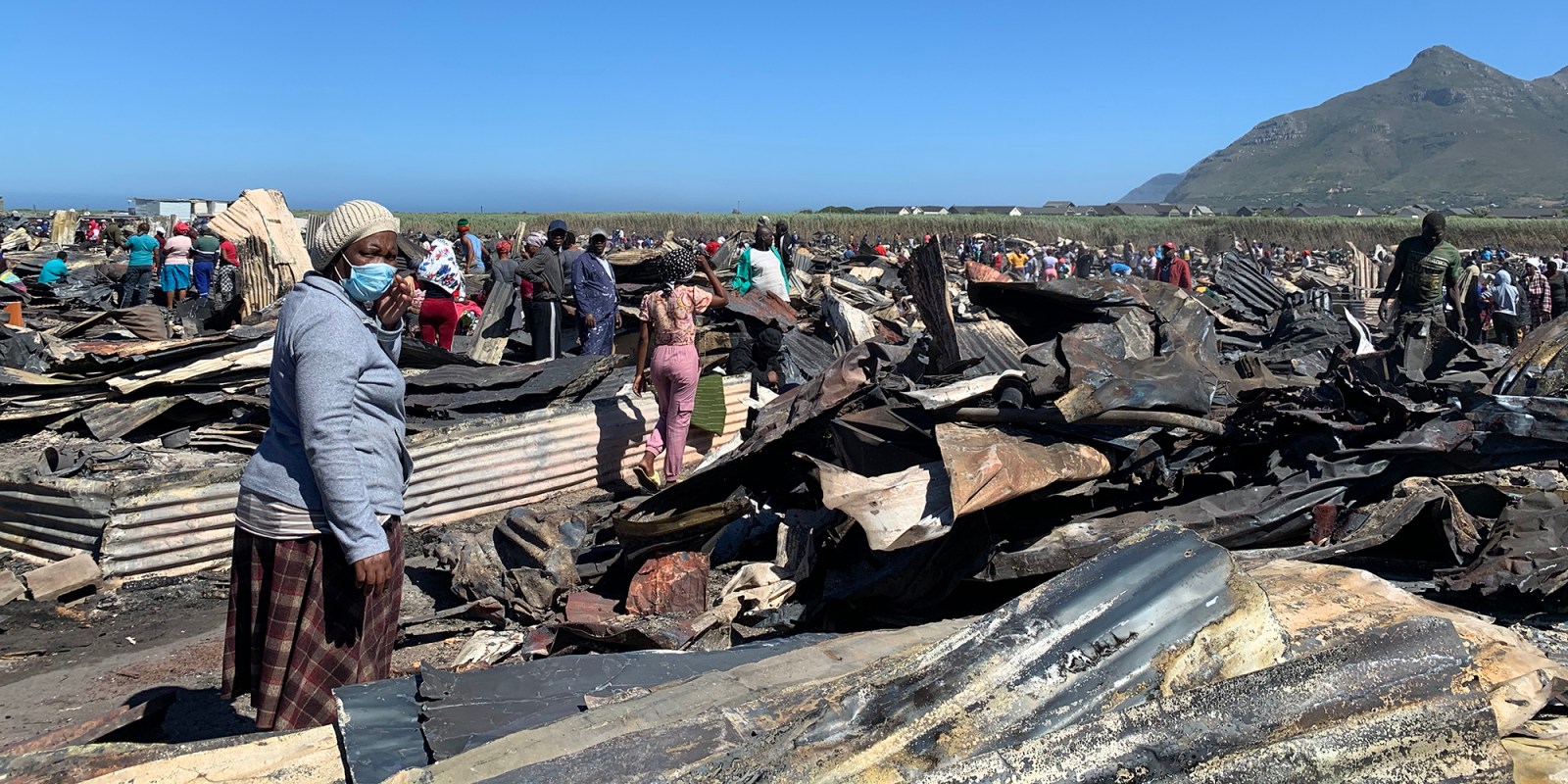 It is estimated that 1,200 homes were destroyed by a fire, fuelled by strong winds, that ripped through an informal settlement in Masiphumelele, in Cape Town, on 17 December 2020. (Photo: Victoria O’Regan)

On Tuesday, 22 December 2020, the national Minister for Human Settlements, Lindiwe Sisulu, visited Masiphumelele and spoke to some of the most affected residents and stakeholders in order to 'find a lasting housing solution to this fire-prone community', as she put it.

She was accompanied by a number of housing officials from the City of Cape Town, among them Malusi Booi (DA), councillor and Mayco member for Human Settlements, who stated afterwards: “What Minister Sisulu and I have reported to the community is no quick fix, but long-lasting solutions in order to improve the living conditions in Masiphumelele.”

Long-lasting solutions? This is what many activists inside and outside of Masi are fighting for and most residents have been dreaming of for many years.

One elderly woman from the totally burnt down B-section of the informal settlement “Wetlands” one morning after: “I only heard it on the radio now – haybo! Is it really true, finally…? After all these years of fire after fire?”

Her daughter nods her head: “Ewe, Mama, this is a Christmas tale. What Madiba promised you once – a better life. The minister said: ‘A house for each of us!’”

Pastor John Thomas from the Church-based organisation “Living Hope” (www.livinghope.co.za), where all efforts for disaster relief are collected and coordinated since the inferno took place on the afternoon of 17 December, adds with a smile: “This time, it is serious!”

The latest count by City officials has confirmed that on this day, the fire started with a few shacks in the B-section of the informal settlement, but due to gale-force winds quickly got out of control and into C- and D-section: Almost 1,100 shacks did burn to the ground, more than 5,000 residents lost everything. Several people were injured, but no one died. All of them found temporary shelter, with some churches or family members and friends inside or outside of Masi. Sadly, Covid-19 rules could be hardly observed.

Since last weekend, trucks were sent in to remove the rubble and debris. All efforts to rebuild and fight about the limited space could be halted – because of one promise by officials which began as a rumour: This time, we do not rebuild the disaster area and wait for the next fire or flooding to happen! This time, we change the area into a safe and decent human settlement – for all who have lost everything again and again!

Some still remember what happened in October 2006: In one night all 400 shacks in the Masi informal settlement “School Site” burnt down – more than 1,200 residents lost everything. For the first time in Masi, the so-called City starter kits with a few metal or plastic sheets, poles and nails to rebuild, were refused: The residents demanded modest, but safe and decent housing, and came up with a plan themselves.

An architect and a fundraiser from neighbouring towns assisted them – and finally, they presented not only a plan on how to build enough flats in two or three-story buildings for all affected plus an additional community hall and playground but also registered all 352 families for housing subsidy who opted to be part of it. It became, even internationally, known under its NGO name “Amakhaya ngoku” (Homes Now).

In September 2009, the first 90 flats were handed over by then premier Helen Zille. In total, 232 flats in eight buildings would be realised until 2014, when serious problems paralysed further progress: On the one hand, internal infighting and corruption were growing. From the outside, the City refused to act in its oversight role as was agreed in a contract of this public-private enterprise. Still, never again these 232 families were victims of any disaster. Many lessons were learnt. And maybe one day, this housing project will be completed and maintained by the City for the benefit of the community as a whole (see more here).

This time, it will be much bigger: Minister Sisulu and Councillor Booi explained that 2,800 homes are planned, set up with fire-resistant material, probably in two-story buildings, each flat with a value of R64,000. Access roads will be part of it and each road will have its own fire hydrant. The total costs are estimated at R200-million.

In January, contractors are expected to put in the first services. All 2,800 structures should be completed by April 2021. During construction time, for those in need, a TRA (Temporary Relocation Area) will be provided, starting soonest.

The next day, almost everybody in Masi talks about this new “Christmas tale”. A young mother who found back her four-year-old daughter beams with hope: “I prayed to God to save my daughter. Now, I just keep praying for a safe home!” One community leader shakes his head in disbelief: “Why not earlier? Why did this not happen 10 years ago? So much suffering could have been avoided…”

One activist from the former Amakhaya ngoku housing project adds: “Wait and see: They will also discover similar problems like we did. Some people will try to register also the shacks they had sublet before as a form of income. And what about those who survived the previous fire in other parts of the informal settlement of more than 10,000 residents – and who are not part this time? Will they wait again or also burn their shacks to get the same?”

Difficult questions. There will be no easy solutions, indeed, no quick fixes.

But the promise had been made by the minister and the councillor. With details about money and time. It sounds like more than a Christmas tale.

Let it please be a reality. Not one day. But next year. DM

Dr Lutz van Dijk is a Dutch-German writer, historian and human rights activist. He wasn’t allowed entry to South Africa until 1994. In 2001, he became a founding co-director of the Hokisa children’s home in Masiphumelele (www.hokisa.co.za). His book “A History of Africa” (preface by Archbishop Desmond Tutu) is told exclusively with African voices.