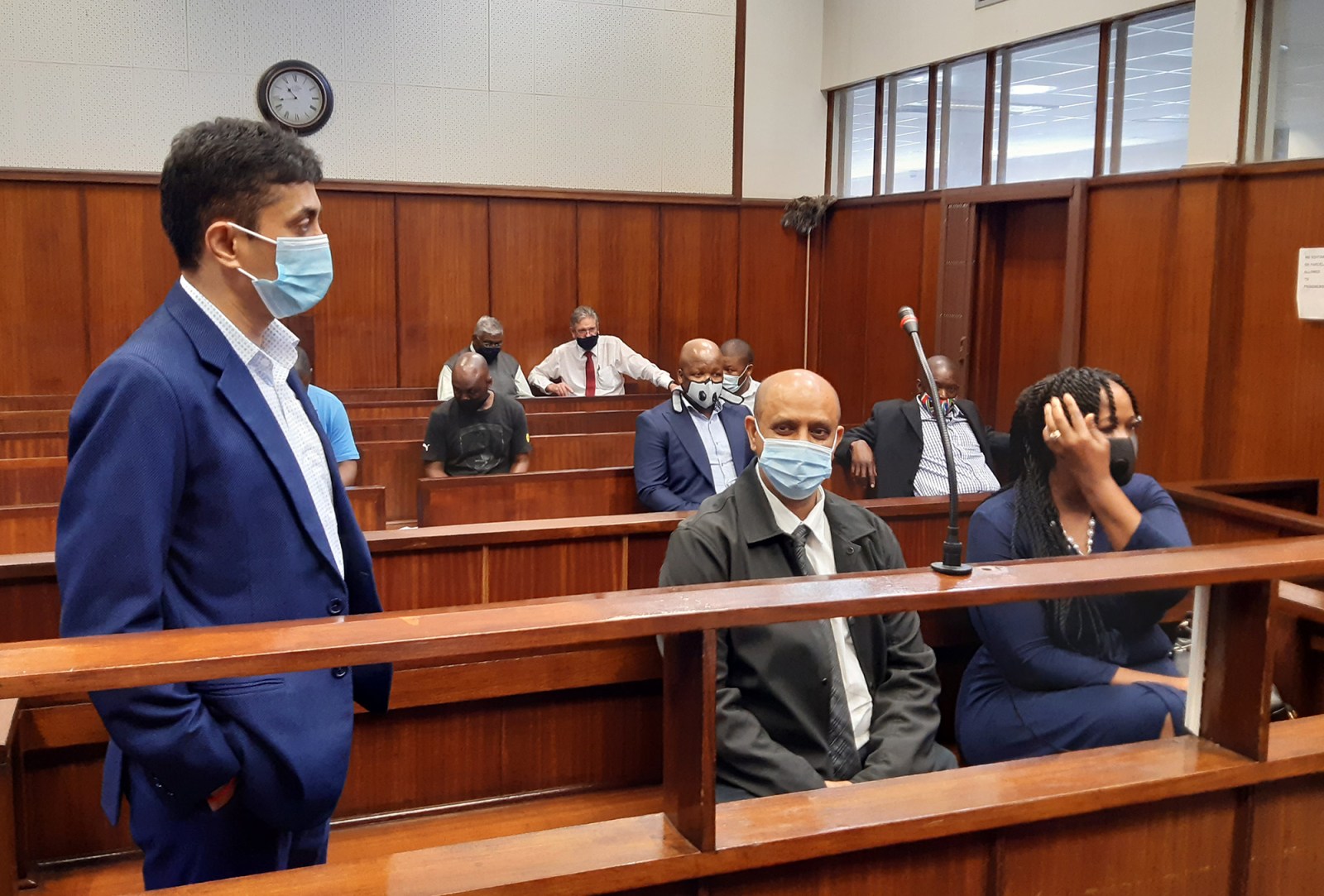 Thoshan Panday, Navin Madhoe and Mmamonnye Ngobeni are facing 230 counts of fraud and corruption totalling R60-million relating to temporary police accommodation and other services for the 2010 Fifa World Cup.

Unlike previous appearances, there was zero drama at the Durban magistrate’s court on Thursday morning when uMhlanga businessman Thoshan Panday and two other accused in the 2010 Soccer World Cup graft case appeared before magistrate Mike Lasich.

Proceedings took all of six minutes.

The court heard that five other accused had been added to the indictment, and would present themselves at the next date, subsequently set down for 8 February 2021 at the Durban high court, for a provisional pre-trial hearing.

Looking drawn and tired Panday, former cop Navin Madhoe and former KwaZulu-Natal police commissioner Mmamonnye Ngobeni took to the dock before a gaggle of journalists who clamoured for photos.

Ngobeni, uncharacteristically slouching, averted her eyes as best as she could. Panday, hands in pockets, stood looking away from the cameras after his initial thumbs-up, while Madhoe’s gaze was directed forward.

Missing was former cop Aswin Narainpershad, who was in isolation following a family member testing positive for Covid-19.

Seasoned state prosecutor, advocate Dorian Paver, whom Daily Maverick readers will know from his prosecution of the on-going Glebelands Eight trial, was standing in for the feisty Talitha Louw.

The matter had been postponed from November, for the State to garner a racketeering certificate and finalise its indictment.  Both were ready at the Thursday appearance.

Paver kicked off proceedings by casually raising a hard copy of the “voluminous” indictment — a stack of papers at least five centimetres thick. “I have a hard copy, signed by [Investigating Directorate head Hermione] Cronje, but digital versions have been given to my learned friends,” he told the court.

“The state also has a copy of the [racketeering] authorisation, signed by [National Director of Public Prosecutions] advocate Shamila Batohi … and a notice of trial.”

Appearing for Panday, Jimmy Howse (SC) told the court that he would be acting for accused five to eight on the indictment, the newly added alleged perpetrators, at the next appearance.

It is unclear if Paver will argue alongside Louw during the actual trial, but it would be a wise move by the state to use his experience, particularly in matters of racketeering, when going up against the likes of Howse, considered one of the province’s top criminal advocates. The men have met many times in their extensive careers, and both are versed in the whims and wants of local judges.

Panday, Madhoe and Narainpershad are facing 230 counts of fraud and corruption totalling R60-million relating to temporary police accommodation and other services for the 2010 Fifa World Cup.

According to the state, they “worked together to manipulate the procurement process to ensure that the common goal of the orders /contracts being awarded [went] to a specific supplier, being the business entities represented by [Panday] and his relatives….”

They are also accused of excessively inflating prices.

The State contends that Madhoe and Narainpershad “had full knowledge that [the five companies used by the SAPS] were all related to or controlled by [Panday]” even though some of his family members, including his wife, were listed as directors.

The State has further alleged that in one instance, the duo submitted a late accommodation application, which “created the situation where the National Office had to apply for a deviation to the normal procurement procedure that would ensure that the recommended service providers would be awarded the orders.”

In return, the State has alleged that Panday, amongst others, paid for two days’ accommodation at the upmarket Oyster Box for Madhoe and his wife.

Madhoe also allegedly solicited “financial assistance” from Panday in the form of R20 000 to buy land, but Panday refused.

He did, however, according to the state, pay for flights for Madhoe and his family, paid for more accommodation at hotels, and bought a car for Madhoe.

Madhoe, the former section head for acquisition management in the supply chain unit of the KZN police, has also been accused of trying to bribe former KZN Hawks head Johan Booysen, with cash allegedly supplied by Panday. Booysen was investigating Panday and his businesses being favourably considered for tenders at the time.

Narainpershad was part of the police’s KZN supply chain unit at the time of the alleged fraud and corruption. According to the state, the benefits he allegedly received from Panday included R 43 500 for his son’s college tuition, a treadmill, also for his son, and hotel stays.

Ngobeni is accused of being an accessory after the fact — she allegedly tried to stifle Booysen’s investigation, telling him there were too many cases of police management being investigated and he should stop probing. Panday also paid for a surprise birthday party for her husband, a brigadier, at a swish upmarket venue in Umhlanga. The deposit was paid for cash, and the remainder via Panday’s Diners Club card.

Investigating Directorate spokesperson, Sindisiwe Twala, who was present in court, told Daily Maverick she could not confirm if the indictment would be circulated to the media, given that the newly added accused were yet to appear. A reading of the well-crafted charge sheet, however, makes it clear who those accused will be. DM

To see previous drama in court, see these two links here and here.