Corporations complicit in State Capture must be held ac...

Corporations complicit in State Capture must be held accountable

While corrupt politicians and state officials have committed serious crimes, they have been aided in committing these crimes by the enabling and complicity of numerous domestic and global companies.

We the undersigned organisations, whistle-blowers and human rights activists, co-ordinated by Open Secrets, write to you as the Commission of Inquiry into Allegations of State Capture, Corruption and Fraud enters its important final phase of work. We write to you today concerning a glaring gap in your work to date: framing the accountability of those corporations complicit in State Capture. There is an urgent need to call corporations to provide detailed evidence of their alleged complicity in State Capture to the commission.

We recognise that the commission is under significant pressure and believe that recent legal steps taken by the commission to compel former president Jacob Zuma to appear in a public forum to account before the commission is to be lauded and is a step in the right direction. However, impunity thrives on a culture of silence and inaction. We believe that it is important to remind individuals such as Zuma that we are all equal before the law and that he is not beyond being held accountable for his alleged actions and that his appearance before the Zondo Commission is fundamental to ensuring the public’s right to know.

We also write to you as South Africans commemorate the National Day of Reconciliation on 16 December, one week after International Anti-Corruption Day (9 December) and International Human Rights Day (10 December). We believe these dates represent three themes that are central to challenging issues of State Capture, corruption and fraud in South Africa. They are that:

While we note the intention of corporations like McKinsey & Company to repay a small portion of the funds owed to South Africans, we fear that the manner in which this has been trumpeted by the commission in a recent press statement suggests that justice is traded at a discount for the very rich and powerful. We have not yet seen any corporation forced to meaningfully account for their complicity in State Capture before your commission. Where representatives appeared, most have only shown the vaguest amount of contrition, and evidence leaders have not adequately cross-examined them about their complicity. We fear this creates an impression detrimental to the commission: that they are being treated with “kid gloves”. The public has a right to know the truth regarding the complicity of corporations in State Capture. The commission, a public forum that has extensive inquisitorial powers, has a unique opportunity to arrive at the truth which it has thus far failed to fully utilise.

These crimes must lead to prosecutions, which demands evidence of criminal conduct by corporations and political elites. As such, the commission has the responsibility to deeply probe the conduct of all players in State Capture – including corporations. We fear that an impression is being created that powerful multinational corporations and their local business networks were somehow the unwitting participants or even “victims” of crimes perpetrated by scheming politicians. The evidence which we and many other organisations have presented to the commission shows that this is simply not true: these corporations have enabled serious crimes, all for the sake of profit. They are likely to do so again if their conduct is not properly interrogated or uncovered. This call for accountability is motivated by the generational damage caused to the lives of millions of people in South Africa.

To be clear, we are not interested in factional political disputes and only the accountability of politicians but rather the full understanding of the institutional framework which must be dismantled. We believe that under the Constitution, equality before the law demands accountability without fear or favour; even of the corporations, given the Constitution’s horizontal and vertical applicability.

We thus write to you with a request that you urgently exercise use your powers under the Commissions Act of 1947 to summon private actors implicated in State Capture to appear before the commission and respond to questions regarding their conduct in the cases in which they are implicated. This will empower the commission to make rigorous and effective recommendations to law enforcement authorities regarding further legal action to be taken against private actors implicated in wrongdoing. These questions should include:

We urge you to use your powers to compel the following corporations (this list is not exhaustive) to appear before the commission. We recognise that in some instances, representatives of corporations such as McKinsey & Co. and the major South African banks have appeared. However, we believe that the commission has to date failed to fully probe their alleged complicity. They are: 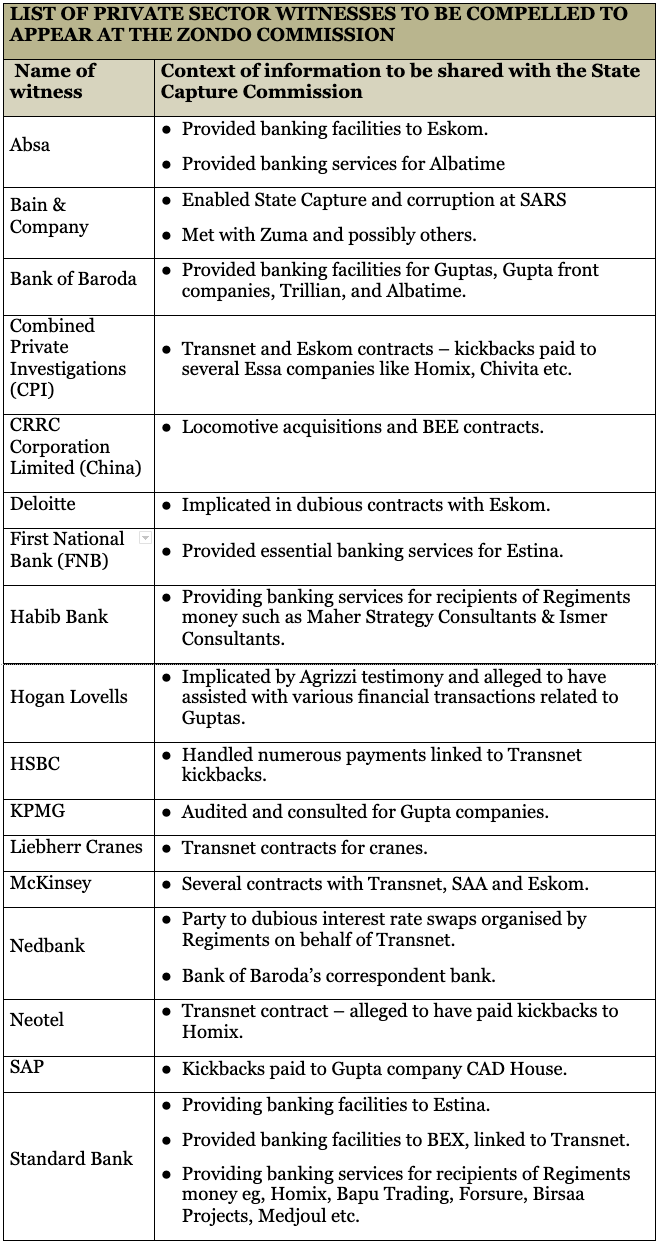 We ask that the commission’s secretary provides a written undertaking by no later than 5pm on Friday 8 January 2021 of the commission’s intention to call these corporations to appear before the commission in the time remaining for evidence to be heard. Should the commission fail to respond to this letter with a firm commitment to call these witnesses we will consider all options available to us, given the importance and public interest involved in these matters.

We look forward to your urgent response.