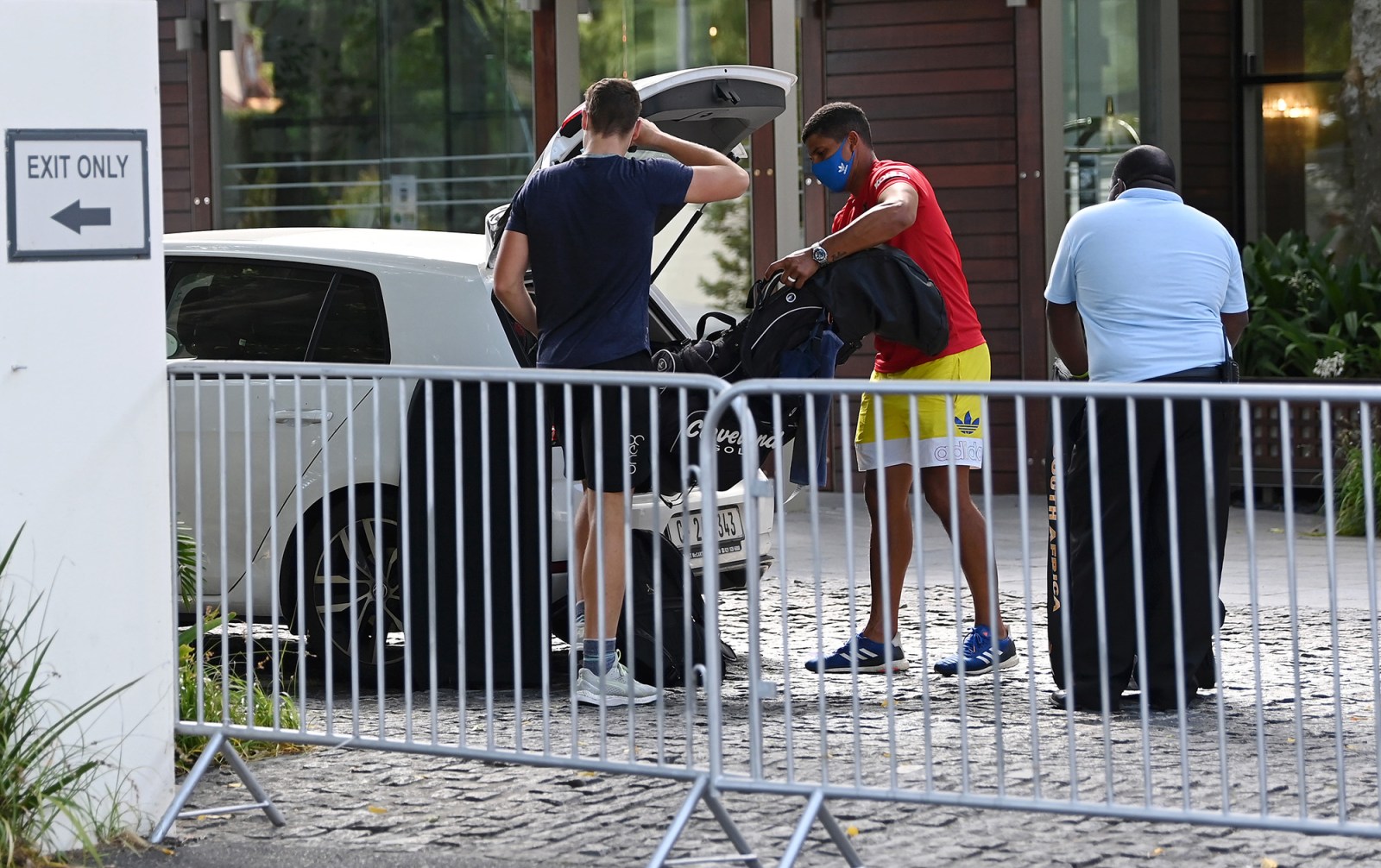 South African cricketer Beuran Hendricks packs his kit into a car at the Protea’s Cape Town hotel after the cancellation of the England cricket tour. (Photo: Shaun Botterill / Getty Images)

The remainder of England’s short cricket tour to South Africa has been cancelled after breaches in the bio-bubble allegedly led to five positive Covid-19 Tests in the past three days.

In an unsurprising move, Cricket South Africa (CSA) and the England and Wales Cricket Board (ECB) decided to call-off the ill-fated tour as relations between the countries continued to sour.

In a joint statement, CSA and the ECB took a cordial tone, but the decision has cost CSA upwards of R30-million in lost broadcast revenue and also caused reputational damage, even though it is unclear how two members of the England touring party tested positive for Covid-19.

Daily Maverick has learnt that when retested, those two individuals – a member of the England coaching staff and a player – returned negative results. False positives are a fairly common occurrence.

The three scheduled One-Day Internationals (ODIs) have been “postponed” and could be played any time in the next three years as part of the International Cricket Council (ICC) Men’s Super League.

Officially, the decision was taken jointly by the two boards to ensure the mental and physical health and welfare of players from both teams. Unofficially, the situation is more complex.

“CSA and the ECB will now work together to determine when the three-match series, which forms part of the ICC Cricket Men’s Super League, can take place in the future,” a statement read.

CSA acting CEO Kugandrie Govender said: “The concern over the mental health impact of recent events on all involved is not one that we as CSA or the ECB take lightly and the decision to postpone the tour is the most responsible and reasonable course of action for us.

“I would like to thank the ECB for the continued positive relations, and we look forward to hosting the England team in the near future.”

Tom Harrison, ECB Chief Executive Officer, said: “We have always maintained that the welfare of our players and management is paramount. We were concerned about the potential impact that recent developments might have on the well-being of the touring party, and so after consultation with Cricket South Africa, we have jointly made the decision to postpone the remaining matches in this series, in best interest of the players’ welfare.

“I would like to thank Cricket South Africa for their support and understanding on this matter and look forward to working with them to identify a time when we can return to play these fixtures in the future.”

England are due to fly out of the country on a chartered flight on Thursday. If members of the touring party still return positive Covid-19 tests before then, it is unlikely they can leave as they will have to go into a quarantine period.

But the fact that the ODIs didn’t go ahead is a matter of increasing intrigue.

Daily Maverick has learned that following a three-hour meeting between England players and the ECB on Monday, it was the players who refused to take the field despite the ECB urging them to do so.

Considering the Covid scare in the England camp was a false alarm and despite England sending the samples of the “positive” tests for further independent lab testing, which also came back negative, the players would not budge.

It has left the ECB embarrassed, because it appears that despite claims of a bio-bubble breach, CSA did everything in its powers to maintain a secure environment.

It also doesn’t fully stack up, considering England’s players golfed on five occasions and undertook an unscheduled practice at Newlands outside of the designated training area in the centre of the ground. That training session breached Covid protocols.

It’s also understood that as a gesture of goodwill, the ECB will endorse CSA’s handling of the bio-bubble to ensure that Sri Lanka, Australia and Pakistan fulfil their touring commitments to South Africa this summer.

The consequences of one or all of those tours being cancelled as a result of this situation would be catastrophic for the financially strained CSA.

The ECB, which appears to be facing a revolt from its own players who are feeling the toil of months in bio-bubbles, could also pick up the entire hotel bill, which amounts to R8-million.

Why would England want to call the tour off?

One theory why England’s players refused to take the field is that several of them are heading straight from South Africa to Australia to take up lucrative Big Bash League (BBL) contracts.

The domestic Australian T20 tournament starts later this month and foreign players need to spend 14 days in quarantine in Australia before they can play in the BBL.

Should any England players come up with a positive test between now and Thursday, when they are scheduled to leave South Africa, they will be forced to stay in Cape Town and isolate for 10 days. It would mean missing the BBL.

Current England tourists to South Africa – Sam Billings, Jason Roy, Liam Livingstone, Jake Ball and Lewis Gregory – are scheduled to play in the BBL. But Tom Curran and Tom Banton have pulled out of the BBL, citing bio-bubble fatigue as an issue.

Whether England play ODIs against the Proteas or remain shut in the hotel, they are not leaving until Thursday, further raising the question of why they could not play at least one ODI.

The mental well-being of the players, coaches and also employees of the Vineyard Hotel, who have been under virtual lock and key, has to be taken seriously.

After a South African player returned a positive test last Thursday, England expressed their concern, which was confirmed by CSA chief medical officer Shuaib Manjra at the time.

The implication has been that the initial positive tests in the England camp may have stemmed from two employees at the Vineyard Hotel who returned positive tests. But that connection has not been proven.

What has become abundantly clear is that CSA did everything reasonably possible to accommodate England. CSA never guaranteed the ECB a “zero-risk” tour. They couldn’t.

England might point to the fact that in months of bio-bubbles during their own summer there was not a single positive Covid-19 test, while there have been three in the Proteas camp in three weeks.

However, there was a breach in the English bio-bubble earlier this year when fast bowler Jofra Archer left the secure environment and attended a party. He did not contract the virus, but was suspended for his actions.

As for the Proteas’ positive results, two were diagnosed when the squad first gathered – in other words, the Proteas had not yet been in the bio-bubble – and one occurred last Thursday.

Sources have confirmed that the player who tested positive last Thursday had undergone four previous tests which were all negative. It’s a situation that has left the medical staff perplexed.

Before the start of the T20I series, one South African player (whose identity is known to Daily Maverick) tested positive as the players came into camp. As a consequence, the Proteas cancelled all practice matches and were split up into groups of three to limit contact between squad members.

It hindered their preparation, but it was seen as a necessary precaution to keep England happy. But sources inside the Proteas camp assert that despite their best efforts, England players were “looking for every excuse” to pull out. DM