Round Number One: Pravin Gordhan and Dali Mpofu trade verbal blows at commission 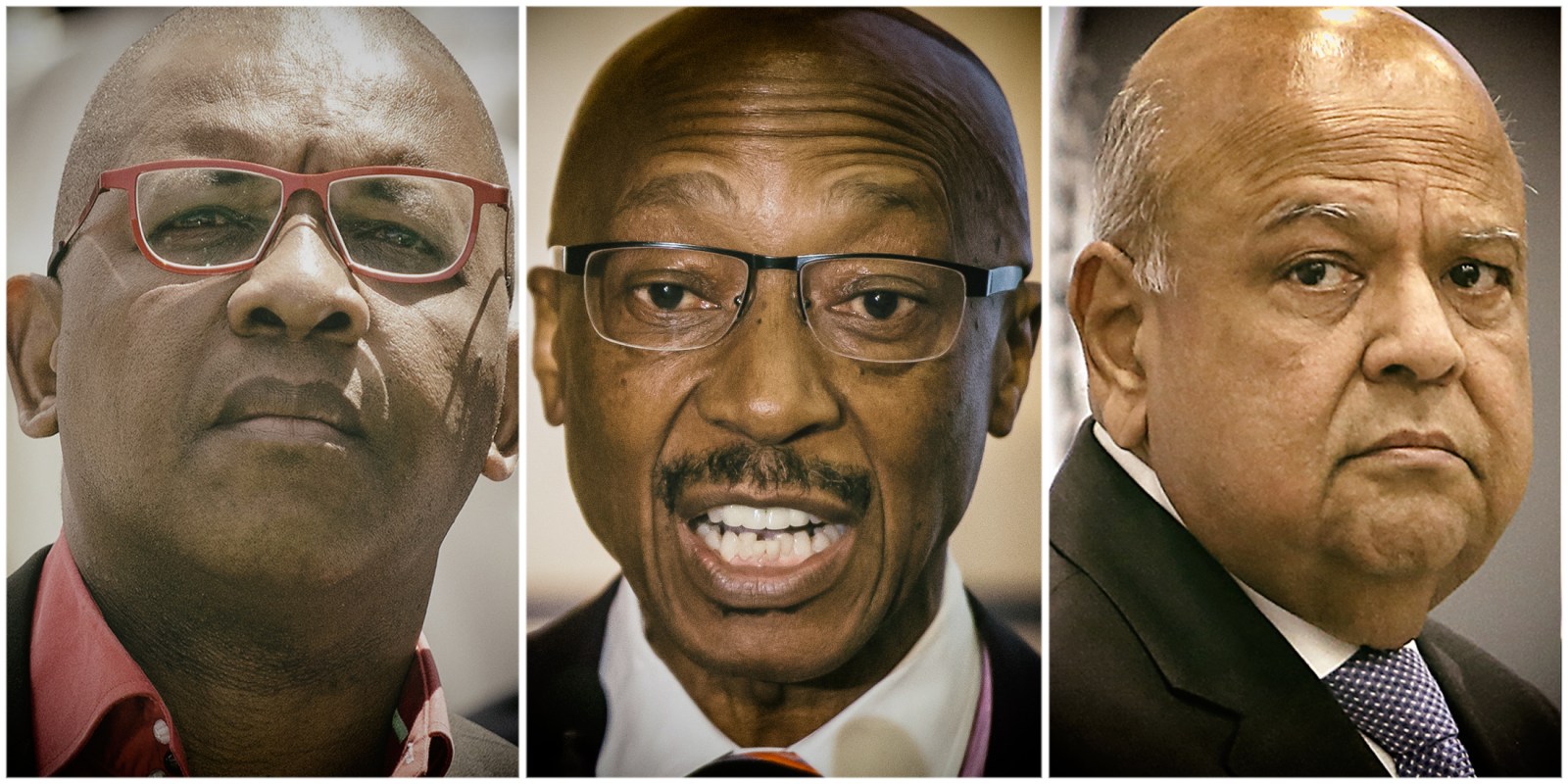 Did Tom Moyane try to further the State Capture agenda? That was the only question before the State Capture inquiry on Monday as the former SARS commissioner’s counsel, Dali Mpofu, cross-examined Pravin Gordhan and attacked his credibility. There were few answers during the tense exchange.

Who won the fight: Public Enterprises Minister Pravin Gordhan or Dali Mpofu, SC, representing former SARS commissioner Tom Moyane? At the State Capture inquiry on Monday, both threw consistent jabs and each might claim to have scored a knockdown. The battle went the distance and the rematch will be highly anticipated.

Monday’s sitting of the commission, officially called the Judicial Commission of Inquiry into Allegations of State Capture, Corruption and Fraud in the Public Sector Including Organs of State, was destined to descend into a boxing match but few people would have predicted how little evidence would emerge and how the bickering might highlight the commission’s ongoing challenges.

Mpofu attempted to box the minister into a narrative that he had no evidence to claim Moyane was involved in or furthered the State Capture project and that he accuses opponents of State Capture because he’s a racist bully trying to deflect from his own wrongdoings.

But the advocate, a former EFF national chairperson, struggled to present evidence to corner Gordhan and made offhand remarks that observers might tie to his personal or political views.

Gordhan responded to simple questions with long-winded answers and was defensive from the beginning, taking the bait Mpofu dangled and making jibes towards the advocate, likely furthering the perception that he is arrogant and self-righteous in his views on corruption and State Capture.

“I reject with absolute contempt any suggestion that there is racism involved in my interactions,” said Gordhan in one exchange.

“Well, grow up, Mr Gordhan, don’t be cheeky. How does that feel?” asked Mpofu.

“I take it the way it comes, Mr Mpofu,” said Gordhan before the pair started talking over each other.

“Well,” said Mpofu, “I can tell you how it feels for people like me. Let me give you advice: you must never again belittle African people the way you did in this conversation by telling them to grow up…”

“And that they’re cheeky…

Mpofu finished, “You must not do it again, okay.”

Mpofu had raised a transcript of a phone call between Gordhan and Moyane where the minister told Moyane to “grow up” – Moyane said the same back to his political principal – and called him “cheeky”. Mpofu claimed Gordhan had belittled a black African of a similar age to himself, which he claimed was evidence of his racism.

Gordhan denied he was racist or arrogant. He said the conversation was about Moyane publicly attacking a judge through his spokesperson at SARS.

The transcript shows the minister asked Moyane to stop making comments about the judge, which Moyane appeared reluctant to do. As that phone conversation became increasingly acrimonious, Gordhan accused Moyane of regularly meeting with the Hawks and claimed the SARS commissioner was resisting his instructions because he felt empowered by his connections.

Part of State Capture is to take control of an institution either at a board level or CEO level, so this is the CEO level. Secondly, it’s to protect yourself from any interrogation or transparency in relation to the kind of damage that is caused within the institution.

Under pressure, Gordhan admitted he did not have evidence to support his claim on the call that Moyane was meeting the Hawks “every day”. He maintained, however, that there was a pattern of behaviour showing how the SARS commissioner repurposed the institution to further the State Capture agenda and evade accountability.

Gordhan said that when he returned to the post of finance minister, days after Des van Rooyen’s brief stint in office in 2015, he met with Moyane to discuss issues at SARS but the commissioner essentially refused to account to his boss.

For example, said Gordhan, Moyane withheld information, paid staff bonuses before seeking his approval, as requested, and submitted leave applications to the Presidency rather than the Office of the Treasury.

Moyane allegedly refused to discuss his plan to restructure SARS, which hollowed out the institution’s investigative capacity.

“Part of State Capture is to take control of an institution either at a board level or CEO level, so this is the CEO level. Secondly, it’s to protect yourself from any interrogation or transparency in relation to the kind of damage that is caused within the institution,” said Gordhan.

“So the refusal to discuss the operating mode, the question of bonuses all add up to that kind of refusal and the third is then go about repurposing an institution or parts of an institution.”

That was largely the sum of Gordhan’s testimony on Monday. He repeatedly referred to the findings of the Nugent Commission, which made wide-ranging findings against Moyane, but Mpofu questioned him on what he personally knew and his belief that Moyane was part of the State Capture project before Nugent’s inquiry.

The commission chairperson, Deputy Chief Justice Raymond Zondo, denied Moyane’s bid to cross-examine Gordhan, except on one issue: Gordhan’s claims that the former SARS commissioner had advanced the agenda of State Capture.

Mpofu pushed his luck on Monday and tried to draw responses from Gordhan on a wide range of issues, including whether former president Jacob Zuma was the architect of State Capture, the alleged “rogue unit” and former SARS deputy commissioner Ivan Pillay’s retirement package.

Gordhan’s defensive and argumentative responses might have been motivated by both the questioner and the current political climate.

Allegations of State Capture are central to ANC divisions and Gordhan has been described as a key player in the attempts to clean up corruption, but he’s also been criticised for acting against perceived opponents without due process.

The accusations and evidence against Moyane are vast and well-known, but on Monday Mpofu successfully subjected Gordhan to the trial of public opinion and cast doubt on his claims about State Capture and on the whole State Capture narrative. The minister was a willing participant in the slanging match.

The chairperson has shown deference to all parties involved throughout the commission, often only intervening when absolutely necessary.

He intervened occasionally on Monday but struggled to keep the conversation on topic and often appeared unable to keep Mpofu and Gordhan from speaking over each other as their heated exchanges went off-topic.

Zondo might be trying to avoid later challenges of bias, but it’s no surprise that Monday’s cross-examination ran long over its scheduled two hours or that his inquiry is scrambling to meet its March 2021 deadline.

The commission adjourned on Monday without concluding Gordhan’s cross-examination, due to be continued at a later date. The commission won’t sit on Tuesday as other SARS-related testimony scheduled for this week has been postponed as the relevant evidence leader has fallen ill. DM