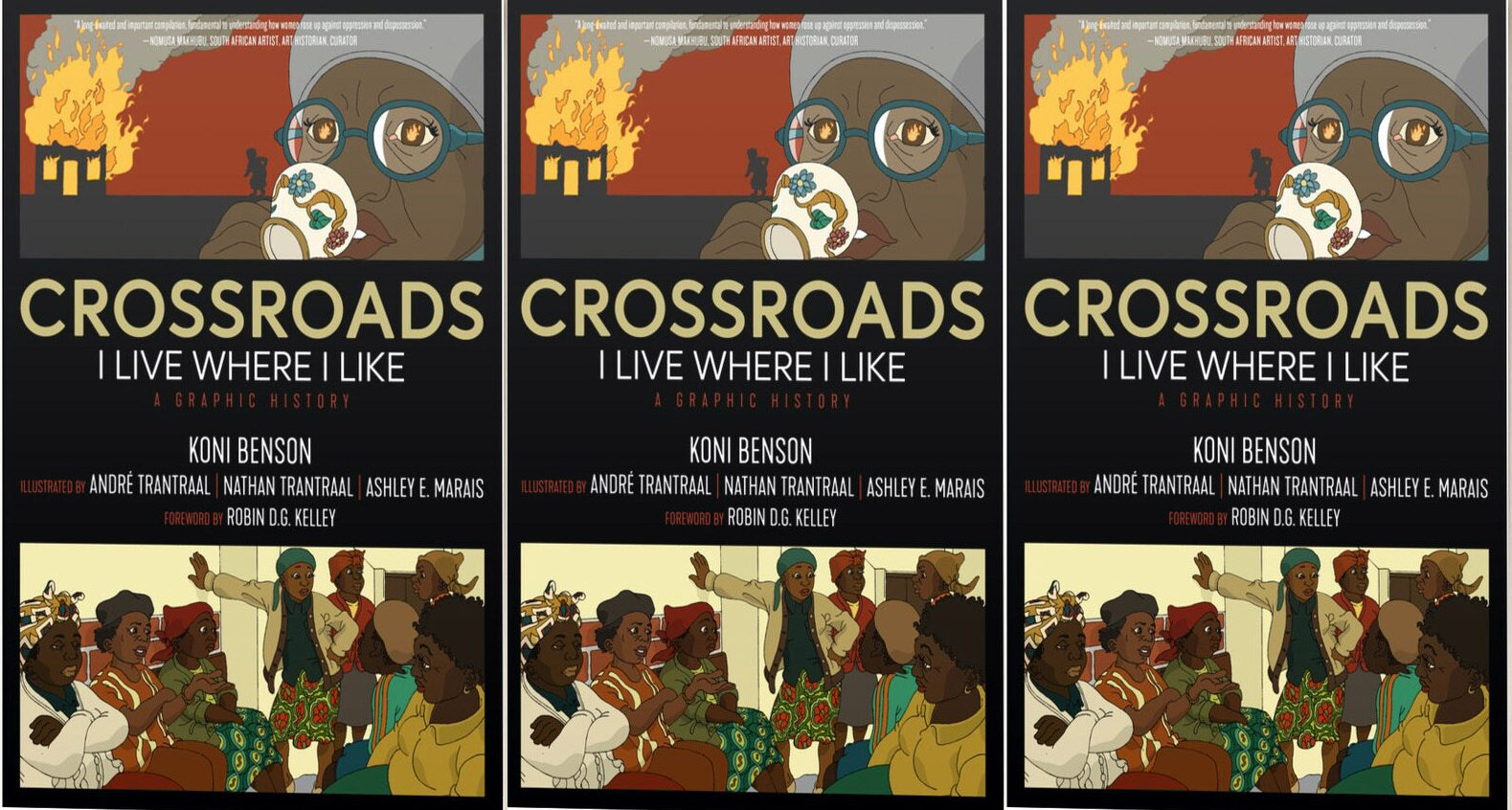 A new graphic book explores the history of Cape Town township Crossroads and how the injustices of the past still linger today.

On 9 August 1956, thousands of women descended on Union Buildings in Pretoria, protesting against pass laws. Led by anti-apartheid activists Lilian Ngoyi, Helen Joseph, Albertina Sisulu and Sophia Williams-De Bruyn to name a few, the march belted out lyrics from a struggle song, singing “Wathint’ abafazi, wathint’ imbokodo” – “You strike a woman, you strike a rock”.

South African history is paved with examples of women shaping the country’s history and resisting its most severe injustices; some of these stories are well-known, while others remain hidden waiting to be told.

One such story is narrated in a new book, Crossroads: I Live Where I Like. The book is written by lecturer in the Department of History at the University of the Western Cape, Koni Benson, who is teaching courses in gender, urban, public and oral history. Benson heard the story of Crossroads while involved in a street-renaming project in the township. That is where the inspiration for the book came from.

“I heard about the famous women of the Crossroads struggle, which resulted in Crossroads being the only African informal settlement in the 1970s to successfully resist the apartheid bulldozers… I wanted to know what happened to the women who spearheaded the struggle for Crossroads,” she says.

The result is a 192-page, six-chapter illustrated book that guides the reader through the women-led movement that built and defended Crossroads during apartheid; the story, which “tells a history of past and present organised resistance movements led by black women” does not end with the demise of formal segregation, instead it “extends past 1994 and into the current period where we have 360,000 families on these so-called housing waiting lists… the book also highlights and outlines current housing struggles,” says Benson. 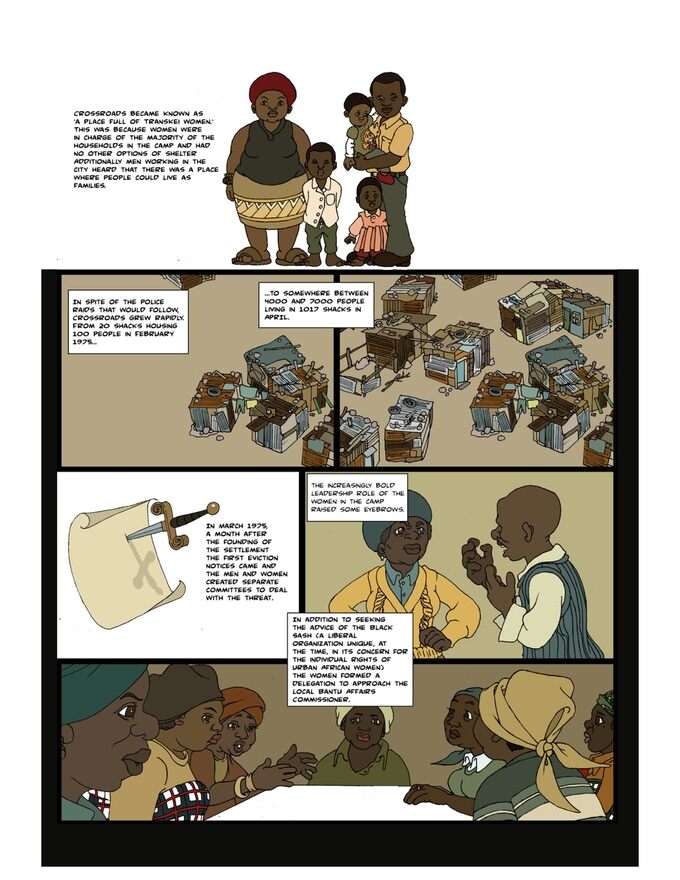 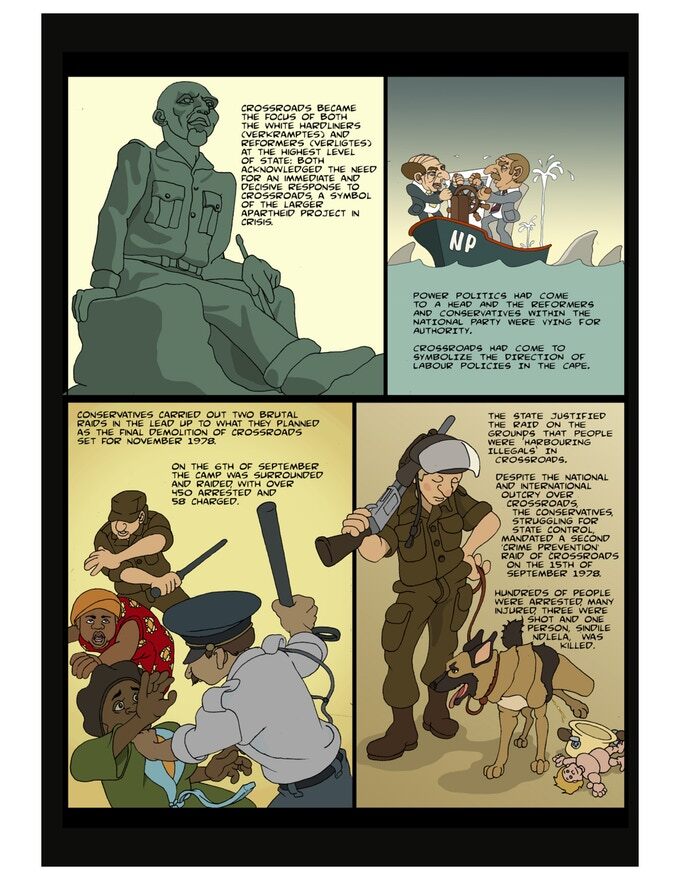 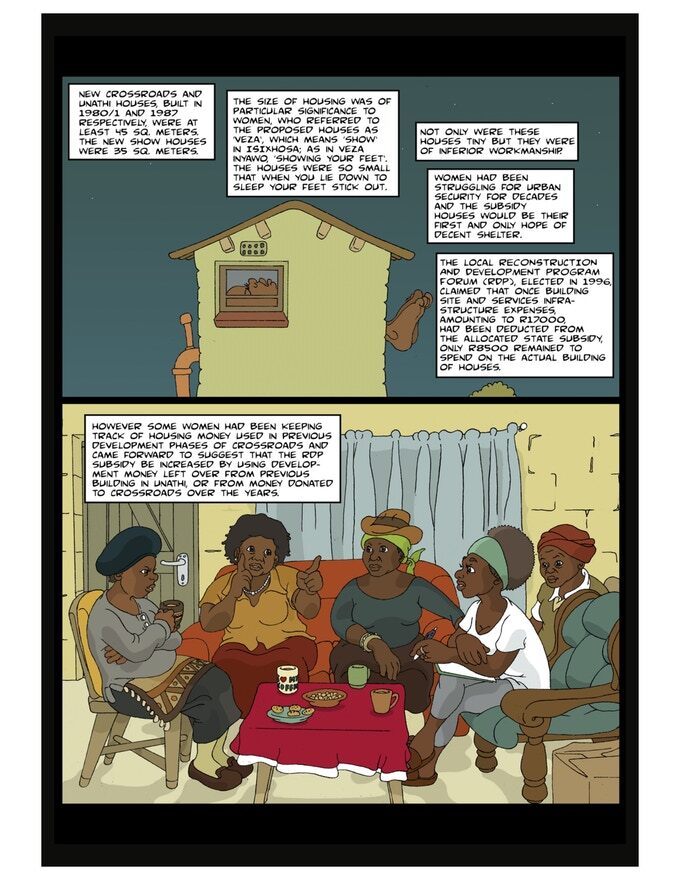 Each chapter deals with a unique topic: from the background of South Africa’s segregated past and the 300 years of shack dwelling in Cape Town, to the Crossroads Women’s Committee and the strategies they employed to resist forced removals and the migrant labour system; the book also covers Imfudoso, a play about the resistance movement the committee staged and toured with in the late 1970s and early 1980s. Says Benson, “It was never written down. But when women speak about the play, that play to them holds the memory of the time because it was their narration of their struggle.”

“It is an illustrated story but there’s nothing that’s made up in this book. It is based on historical study, so not a single character or person or quote from a newspaper or quote from a person is made up,” she explains.

The story was researched through interviews with the women living in Crossroads during that time as well as a deep dive into archival newspapers, posters, photography, pamphlets, newsletters, and documentary clips, ensuring a holistic overview of the time.

However, none of this is done through a purely historical lens. Instead, the modern struggles of living in one of the most unequal cities in the world is a constant backdrop in telling the story of Crossroads.

Crossroads: I Live Where I Like is also published as a sort of comic book, something Benson thought was important, especially to draw more readers to a story that has been left untold for too long.

“Comic books are accessible, but also layered and painful and beautiful. A lot of women in Crossroads who I interviewed said you have to make this interesting for our kids, because they think our stories are boring; the idea of doing it in comic book form would make it a lot more accessible than a 500-page thesis, but also able to convey the nuances and layers of actual people.

“A comic book challenges the ‘Who should be reading history? How should history be written?’ questions,” she explains.

The illustrations were based on archival photos, video footage, community-based news sources and oral histories. Benson explains: “I did over 60 life narratives with people involved from the 1970s all the way into the 2000s. So those narratives are also illustrated.”

The depth of the historical research reflects in the illustrations, which capture life in Crossroads in a powerful way: the shacks, the police dogs, the forced removals, each image allowing the reader to gain a thorough insight into the bravery of the women of Crossroads.

Benton says the audience for the book is wide, including students, activists, historians, artists and for anyone interested “in the history of what has shaped Cape Town and explains the continuation of segregation today, and for an internationalist readership interested in organised resistance movements”.

She adds that the book helps explore various topics and sparks debates especially around “collective resistance”, because “often the histories that are told are about one particular leader or a famous person, whereas this is about collectives. And it’s about women’s collectives that were beyond party politics”.

Looking ahead, they are hoping to translate the book into isiXhosa and Afrikaans and for it to be used by the Western Cape Department of Education in the Grade 9 syllabus to support an oral history unit all learners are required to do.

Crossroads: I Live Where I Like is currently available for pre-order in a fundraising effort that ends on 4 December, aiming to print the book in colour at an affordable price. The fundraiser also encourages readers to buy one and donate copies to libraries and schools across South Africa.  The book will be available from the publisher’s website or from bookstores in South Africa early next year. DM/ML