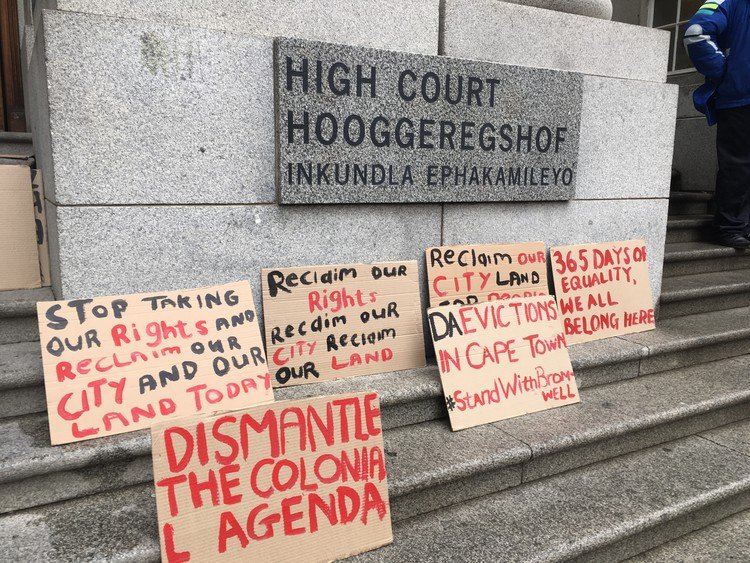 Judgment has been reserved in the case brought by long-standing tenants facing eviction from their Bromwell Street homes in Woodstock, Cape Town. (Archive Photo: Ashley Furlong)

Judgment has been reserved in the application brought by a group of residents facing eviction from their homes in Bromwell Street in Woodstock, Cape Town. The residents are challenging the City of Cape Town’s provision of emergency and temporary housing in court.

Judgment has been reserved in the case brought by long-standing tenants facing eviction from their Bromwell Street homes in Woodstock, Cape Town.

The residents are arguing that the emergency housing provisions offered by the City of Cape Town are unreasonable, and therefore unconstitutional. The matter was heard over two days in the Western Cape High Court.

The residents’ homes were bought by private developers, Woodstock Hub, in 2013 as part of Woodstock’s gentrification push. Meanwhile the residents have fought to remain in Woodstock.

During Monday’s proceedings, advocate Sheldon Magardie, for the residents, questioned why the City had not planned emergency housing in the inner city when the negative consequences of gentrification were already evident.

Magardie said “if it was open to governments or the state to plead inability to comply, then rights would not be worth the paper they’re written on”. He asked the court to declare that there is a constitutional defect in this aspect of the City’s housing programme.

Advocate Karrisha Pillay, for the City, agreed that there should be emergency housing in and around the inner city, but added that it would take time.

On Tuesday, Pillay said there was no legislative obligation on municipalities to develop particular kinds of housing programmes like emergency housing.

“The City cannot provide emergency housing in the inner city and surrounds, because, among other reasons, the cost of securing and developing this land is too high,” she said.

Pillay said housing rights are an evolving issue and the obligation to provide housing is not immediate but progressive. In that light, the City’s conduct is not unconstitutional, she said.

On whether the City’s conduct was progressive (as required by the Constitution), Judge Mark Sher asked Pillay if the current situation wasn’t the same as the apartheid housing policy.

“We are still exporting the poorest of the poor to the periphery – people of colour and black people who are unable to afford housing,” said Sher.

“The result is that we are still giving effect to the legacy of spatial apartheid.

“Isn’t it time for the developers, irrespective of legal obligation, to say: ‘We have a moral obligation to help’?” asked Sher.

Pillay said the City’s response to spatial planning was to develop transport nodes and to take economic activity outside the city centre. Sher questioned this line of reasoning, saying the evidence of Atlantis suggested that this was not feasible.

Atlantis was going to be a hub, said Sher, but now “people are stuck out there with great unemployment and social problems”.

Pillay said the relief sought by the Bromwell Street residents would have consequences far beyond those six households: every eviction for a similar group would need to be considered.

The City in effect argued that giving emergency housing to the Bromwell residents would create a perverse incentive whereby people would get well-located leases, get evicted and then demand emergency housing.

For example, in Pine Road, Woodstock, occupiers got transitional housing from the City in Pickwick Street, Salt River (i.e. near the city centre) because they were on state land earmarked for social housing.

But Magardie responded that the City’s argument that granting the Bromwell Street residents their relief would create a “perverse incentive” isn’t supported by what’s already happened in Salt River.

He said that the City’s argument that there was no obligation in legislation to provide emergency housing in a specific area also does not stand, as legislation only provides a framework, leaving details to provincial and local government.

Advocate Ross Randall, for the Woodstock Hub, said his client has not been able to “exercise its rights of ownership” for six years, and “suffers patrimonial damages” of R24,000 per month, as it pays for the residents’ electricity, water, security and other costs.

Judge Sher asked Randall whether the Woodstock Hub has “a social obligation” to the Bromwell Street residents to help them secure decent housing, t0 which Randall said that the court could not force Woodstock Hub to “fork out further money”.

The judge acknowledged that the matter was complex and said he would deliver a ruling “in due course”. DM