Portrait of a Community Activist

Fikile Nsthangashe: “I will die for my people” 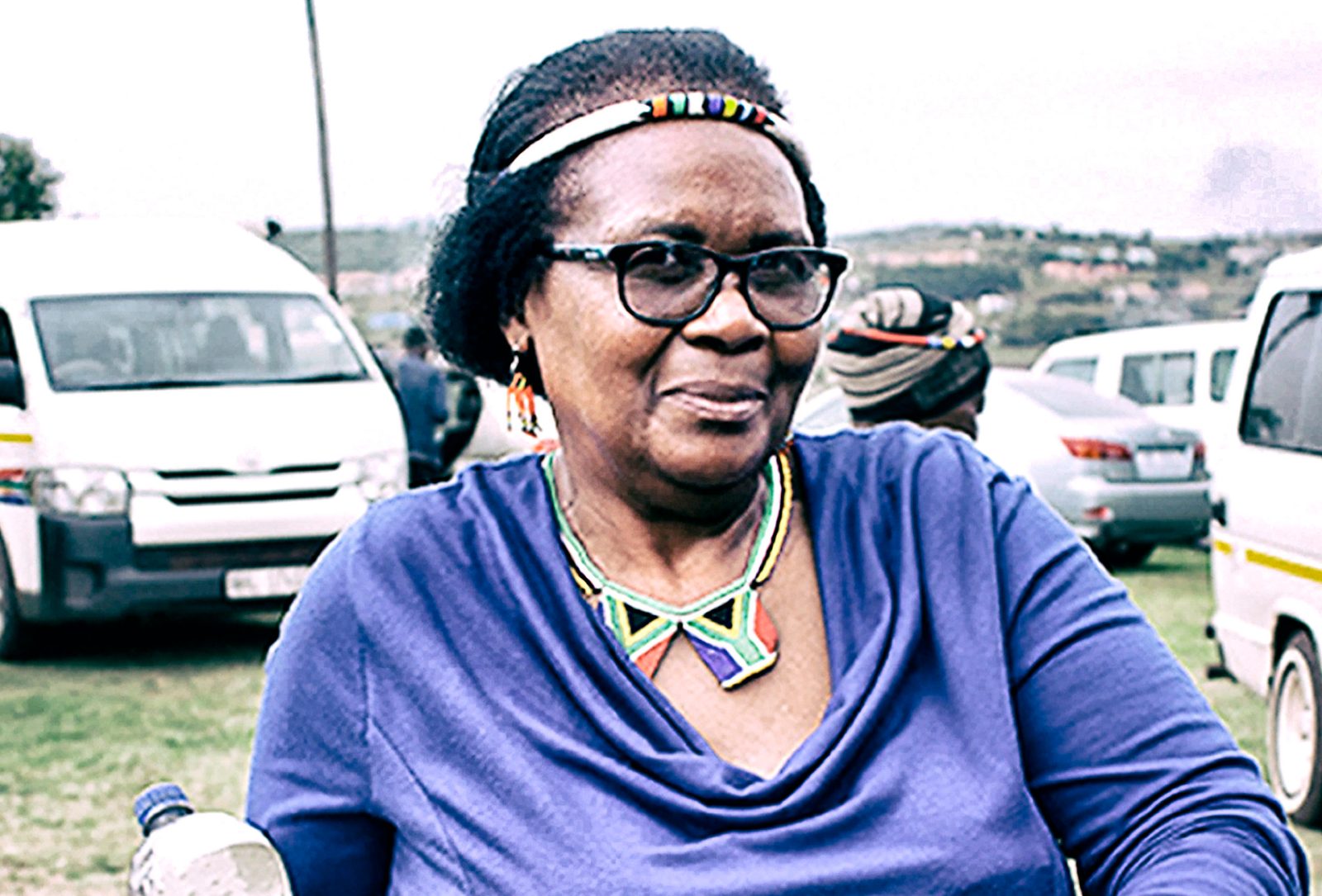 A strongly worded statement from a large number of civil society organisations in South Africa has condemned the death of KwaZulu-Natal community activist Fikile Ntshangashe who was gunned down in her home last week as lawyers were preparing for a groundbreaking appeal fighting an order that her community organisation and those who assisted them should pay for a failed attempt to stop further mining operations in the area.

“I refused to sign. I cannot sell out my people. And if need be, I will die for my people.”

This was the quote that activists remembered Mama Fikile Nsthangashe by after she was gunned down in her home at Ophondweni near Mtubatuba on 22 October 2020.

As the vice-chairperson of a sub-committee of the Mfolozi Community Environmental Justice Organisation (MCEJO), she was deeply involved in the challenge against the further expansion of a large coal mine at Somkele in KwaZulu-Natal by Tendele Coal Mining (Pty) Ltd. She was described by her fellow activists as a strong, passionate and principled leader.

On Tuesday the Supreme Court of Appeal will hear one of Nsthangashe’s final stands – an appeal in the case brought by MCEJO to stop the mining operations in the area.

According to a joint statement issued by environmental rights NGO Groundworks; Earthlife Africa; Global Environmental Trust, Mining Affected Communities United in Action, the Mfolozi Community Environmental Justice Organisation, the Southern Africa Human Rights Defenders Network and Women Against Mining United in Action the South African Police were called on to act swiftly and arrest those responsible for her death.

The statement alleges that four gunmen arrived at Ntshangashe’s home on 22 October 2020 at about 18:30. Her 11-year-old grandson was with her. She was shot five times and died at the scene.

“Tendele’s coal mining operations have caused untold destruction of the environment and the homes and livelihoods of the residents of Somkhele,” the statement reads. “Over the past few months, tension has been rising in the community over the proposed expansion of Tendele’s operations, and [her organisation’s] opposition to that expansion … Recently, Tendele was pushing for an agreement to be signed between MCEJO and Tendele to the effect that MCEJO would withdraw its Court challenges of Tendele’s expansion of its coal mine at Somkhele. Mama Ntshangase refused to sign the agreement, which certain of her fellow sub-committee members signed, purportedly doing so on behalf of the organisation … She warned sub-committee members that they had no power to make decisions on behalf of MCEJO and that the agreement only benefited Tendele. She also refused to attend any of the secret meetings that other sub-committee members held with Tendele. Days before her brutal killing, Mama Ntshangase stated her intention to write an affidavit, revealing that sub-committee members had spoken to her of a payment of R350,000 in return for her signature,” she added.

According to the statement the expansion of the mine would require the relocation of 21 families (19 of them MCEJO members) from their ancestral land. Many of these families have lived on their land for generations.

“We mourn the senseless tragedy of Mama Ntshangase’s murder, and condemn her killing. We call on the South African Police Service to act swiftly to arrest and prosecute her murderers,” the statement concluded.

Martin Mosweu from the Southern Africa Resource Watch said he was deeply saddened and angered by the killing of Ntshangase.

“She was hailed as a courageous human rights defender by her community for standing against the Tendele Coal Mine expansion in violation of the right to a safe environment. The murder of Fikile Ntshangase is a cause of concern to the work of human rights defenders in South Africa and in the SADC region. Governments are failing in their international obligations to the Declaration of Human Rights by not protecting and supporting human rights defenders in the context of their work. In Southern Africa, people who live near mines continue to face threats of violence and intimidation from mining companies who blatantly disregard their socio-economic, land, and environmental rights. Human rights defenders continue to be threatened and killed for standing up against powerful mining companies that violate human rights, often with impunity and tacit support from governments. This is why many mining communities throughout the region are now taking a stand and demanding a new order, insisting on extractive projects that secure a beneficial win-win relationship, free and prior informed consent in involuntary displacements, and community engagement in all stages of the mining cycle for inter-generational sustainable livelihoods,” he added.

Papers filed at the Supreme Court of Appeal for a hearing on Tuesday, in one of the last battles that Ntshangase had been passionately fighting on behalf of her community, has painted a stark picture of the conflict in the area.

The appeal, brought by MCEJO and the Global Environmental Trust is against the refusal by the Pietermaritzburg High Court to issue an interdict to stop mining operations in the area.

The community claimed that the mine did not have the necessary environmental authorisation, lacked land use authorisation, had not removed or altered the traditional graves in the area according to law and had failed to comply with the Waste Act.

The mine, however, argued that it had all the valid mining rights and permissions to carry on with its operations. In papers filed at court, lawyers for Tendele, stressed that their operations were conducted in terms of valid Mining Rights and Environmental Management Programmes granted and approved by the Department of Mineral Resources in 2006 and that while the legislative framework had changed there were transitional measures put in place for mines like Tendele.

This, according to papers before court included the waste management at the mine.

According to papers before court the mine employed 1000 people from 830 households and offered education, provided local communities with potable water delivered by water tankers since 2015 at a cost of R100 000 a month as the Mtubatuba Municipality was unable to provide water to certain areas. The mine also constructed a school and assisted with the provision of teachers and constructed the Somkhele Maternity Ward at the Somkhele clinic at a cost of R3.5m after consultation with the Department of Health.

But affidavits from community members described that they felt the price they were paying was too high. Before mining operations the land around their homes was used for grazing purposes. Rainwater stored in drums for drinking purposes becomes contaminated with dust from the mining operations. Drinking water now has to be extracted from the Mfolozi River. However, when this river ran dry in 2016, the residents were without water for months. They were also concerned about the production of a toxic slurry as a result of mining operations.

According to papers filed at the Supreme Court of Appeal the Centre for Environmental Rights (CER), represented by advocate Max du Plessis SC; intervened in the matter because of its concerns that the judgment opened the door for mining companies to operate illegally. The CER also expressed its concern over a cost order made in the original case as this “would discourage communities from approaching the courts to defend their constitutional rights through the fear of being debilitated by having to pay the legal costs of industry and the state”. DM168