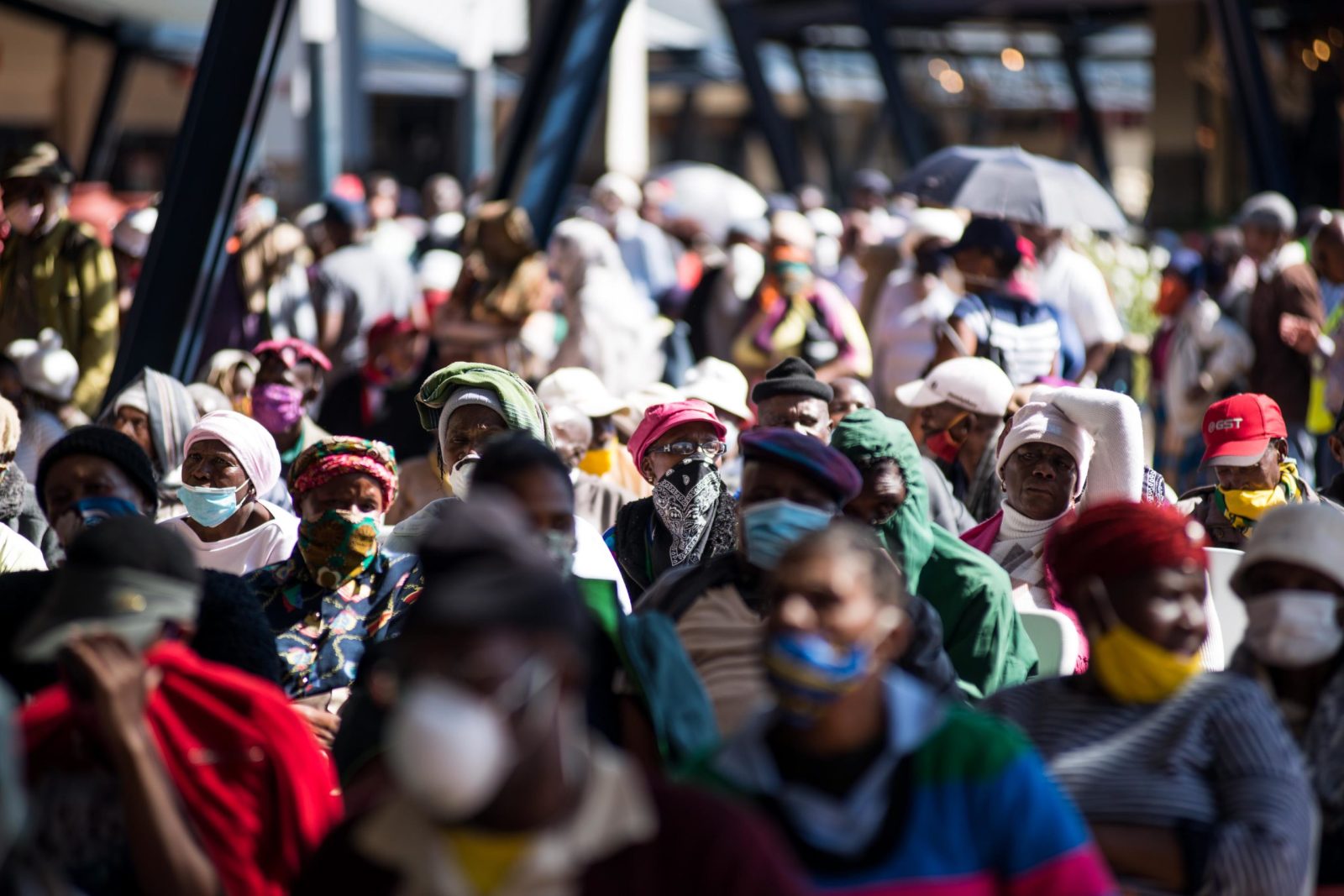 Illustrative Image: A general view of senior citizens queuing for their monthly social grants outside Jabulani Mall on May 04, 2020 in Soweto, South Africa. (Photo by Gallo Images/ER Lombard)

Stellenbosch’s last remaining post office has done a U-turn after an uproar when, under the direction of the Neelsie Centre in which the post office is situated, it closed its doors to recipients of the R350 Covid-19 Social Relief of Distress (SRD) grants.

Posters were up for more than two weeks in the Neelsie Centre during October, informing residents they would no longer be able to collect their R350 Covid-19 grants at that post office.

They were advised to go to other towns’ post offices in surrounding areas. This meant most recipients would need to pay for public transport. A return taxi trip to Somerset West costs about R50.

The Neelsie Centre is owned by Stellenbosch University and operates on a commercial basis. It’s on the SU campus but is open to the general public and is structured like a mini mall with a variety of shops.

Then, on 21 October, it was announced by the Neelsie Centre’s management and SU that Stellenbosch residents would once again be able to collect their Covid-19 grants at the Matieland post office.

The abrupt U-turn followed objections from local politicians and residents.

Gary Howell, a member of the Neelsie Centre’s management, directed questions back to the university.

Martin Viljoen, SU’s spokesperson, said the university has empathy for those dealing with the fallout of the Covid-19 pandemic. However, he said that discussions were held between the Matieland post office, the Neelsie Centre’s management, SU and the district manager of the post office and it was agreed that the Covid-19 grant payments would no longer take place at this branch. Other SASSA payments were not affected.

Viljoen said the increased volume of people in the centre due to the Covid-19 grant payments caused many issues as they could not handle such large numbers of people.

The Neelsie Centre faced risks “regarding access control, security, sufficient facilities, social distancing and other protocols”. He added that there were insufficient parking and regular cash shortages.

“When Stellenbosch University and the centre’s management became aware of the difficulties experienced by those less fortunate who qualify for the SRD grant, we commenced discussions with the [Matieland] post office with a view to [resuming] payments… until the completion of [a new post office in central Stellenbosch].

“The new PO will have more facilities and counters and is ideally positioned to service larger groups of people,” said Viljoen.

The SA Post Office confirmed that the new facility would open on 1 December.

“We are thankful that we are able to partner with the Post Office in finding workable solutions to address the needs of those who rely upon these grants,” said Viljoen.

He said they had not known that the Die Boord post office in Stellenbosch had closed down during the lockdown period, leaving Matieland as the only one in town.

The EFF was among those who took exception to the initial decision to close the facility.

Local EFF councillor Derrick Hendrickse accused SU of “only wanting to interact with the white public that uses the post office’s services and does not want to be part of the reality of most black people who have to wait for hours to get a meagre R350 Covid-19 grant to buy food.”

Evashnee Naidu, KwaZulu-Natal’s regional manager for the Black Sash, said the post office had become the default conduit for cash payments for SRD grants as applicants without bank accounts had no other means of collecting their money.

“As we already know from normal grant pay days, post offices lack the infrastructure and capacity to adequately deal with large crowds, which led to the staggering of grant payment dates as of May this year, where particular days of payment were allocated to particular grants, and a further staggering from August to deal with crowds within a pandemic context,” she said.

“There is little to no adherence to physical distancing as post offices may not even have the capacity to control queues,” said Naidu.

“We urge SASSA to prioritise proper communication with applicants… and to organise better queue management so that people don’t have to wait until they get inside a post office only to be told their grant is not available.

“We also hope that both SASSA and the post office are looking at other viable options to pay these Covid-19 grants so that the PO does not continue to be so overwhelmed,” she said.

Jonathan Walton, a paralegal with Black Sash, added that post offices in the Eastern Cape, in particular, were overwhelmed with queues and poor physical distancing. He said in some instances people also don’t wear masks.

Walton referred to multiple instances of post offices turning away people who had come for their Covid-19 grants because the cash had run out by midday.

He said SAPO and SASSA needed to communicate so that post offices could have a better idea of how many people to expect and thus plan accordingly.

Walton said that SASSA did not do a proper job of explaining to people the difference between grants being approved and grants being ready to be paid out, leading to many people waiting unnecessarily in queues.

The department of social development referred Daily Maverick to SASSA, which in turn referred us to three different communications officers who failed to respond by the time of publication.