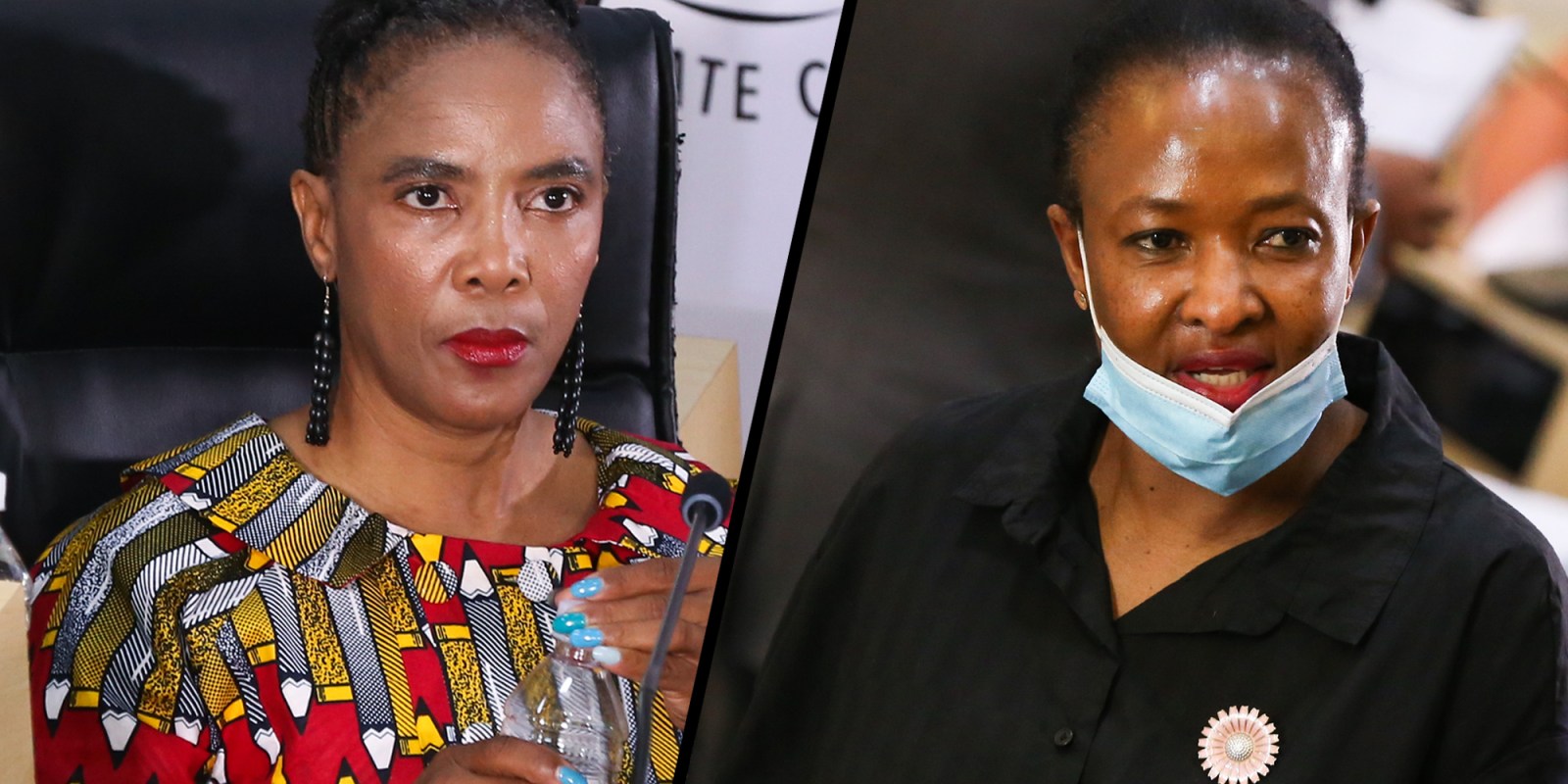 Former president Jacob Zuma booted Lugisani Daniel Mantsha as his attorney in April 2020. Mantsha represented Zuma for two years, after he quit his job at state arms company Denel. Mantsha’s name cropped up anew at the State Capture Inquiry on Monday over executives’ suspensions in 2015.

A former Denel board member has detailed the hurried suspension of three executives from the arms company in 2015, as the company’s management came under renewed scrutiny.

Nonyameko Mandindi testified at the State Capture Inquiry on Monday 26 October. Her appearance was followed by that of the current board chair, Monhla Hlahla.

Mandindi and Hlahla’s testimony signalled a return to evidence on Denel. Recent weeks of hearings concerned other state-owned enterprises (SOEs) Eskom and Transnet as the inquiry’s legal team returned to the Terms of Reference.

Kennedy told the inquiry chair, Deputy Chief Justice Raymond Zondo, that the hearings would consider procurement processes “which also have been alleged to involve individuals who have been implicated in relation to allegations of State Capture, including Mr Salim Essa in particular and the Gupta brothers, and others”.

He highlighted areas of interest, including three contracts awarded to long-time Denel company VR Laser which the Guptas bought; a joint venture with VR Laser to develop business in Asia with special focus on India, and how this relates to State Capture.

In a 2018 submission to the inquiry, the Organisation Undoing Tax Abuse (Outa) accused former minister of public enterprises Lynne Brown of directing a board which “planned the capture of Denel”.

“Outa believes that the board set up by Brown took decisions on Denel which did not make commercial sense but were aimed at lining the Guptas’ pockets in a massive state heist,” read the submission.

Former Denel board member Mandindi detailed her concerns about the hurried suspension of three Denel executives in 2015 when former president Jacob Zuma’s one-time attorney Lugisani Daniel Mantsha was chair of the board.

The night before, said Mandindi, questions about the executives’ conduct were sprung upon Denel’s relatively new board during a special meeting.

Mandindi reported that the meeting started late. She claimed Mantsha called her into his office where he told her the delay was due to the Audit and Risk Committee (ARC) discussing executives’ conduct.

Zondo was eager to know why the executives’ suspension was deemed urgent during the meeting of Tuesday 23 September 2015.

“That was my concern,” replied Mandindi.

Mandindi said she raised the alarm on the prospect of tanking black professionals’ careers by acting in haste. “The manner in which you let people go can also destroy them,” she said.

Mandindi testified she had prepared for a discussion on Land Systems South Africa (LSSA) but the meeting’s agenda soon changed to the executives’ maligned conduct. “I was a bit confused, because that wasn’t the purpose of the meeting,” she said.

Questions over the competence of the CEO and CFO “were taking priority over the exact issue” for which the special meeting had been called, namely LSSA.

Note: Several months earlier Denel completed the acquisition of LSSA from BAE (75% at R641-million) and DGD Technologies (25% at R214-million).

Mandindi testified there was no discussion of LSSA during the meeting while she was present, and she left early.

Zondo asked if the change in agenda from LSSA to the executives was formally agreed to by members of the board. Mandindi could not recall.

In her view, the board members, including leader Mantsha, were still “finding our feet around Denel”, making talk of suspending executives premature.

“It just happened too fast. From July to September, I just thought it was too much,” said Mandindi.

Furthermore, it was to her “a bit odd and also unfair” on the executives and the board members to discuss suspensions during a meeting earmarked for a discussion about LSSA.

Mandindi testified it was “too soon” to question the executives’ conduct, consider suspensions and even identify candidates to fill their posts in an acting capacity.

She said a report from the ARC regarding the executives’ conduct was handed to board members during the meeting. There was insufficient time to assess the report, which, Mandindi said, “contained inaccuracies” and lacked substance.

“I was extremely concerned,” she recalled. By the time she left the meeting at about 9pm, the board had not taken a decision.

Zuma has since booted Mantsha as his attorney and replaced him with Eric Mabuza, who has also represented former tax commissioner Tom Moyane.

Zondo quizzed Mandindi on her exit before the meeting’s conclusion.

“I didn’t like the discussion, Chair, and I didn’t come prepared for a discussion like that. I just didn’t feel like I was going to add any more value,” she said.

Brown announced a “rotation” of Denel’s board on Friday 25 July 2015. She appointed Mantsha for a three-year period.

In a government press release issued at the time, Brown lauded the outgoing board for their accomplishments.

“They handed over a company that is truly on a path to positive sustainability,” said Brown.

“I commend them for their professionalism and ensuring the handover report was of such a quality that it will be a critical guide to the new board.”

Within months, however, the conduct of Mantsha’s board was so dubious that Mandindi walked out of a meeting and immediately flagged her concerns in a letter.

Last year the Deputy Director-General of the Department of Public Enterprises, Kgathatso Tlhakudi, told Zondo of his “surprise” at Mantsha’s appointment.

On 19 March 2019 he raised doubts about Mantsha. “Mr Mantsha was at some point struck off the roll of attorneys. That doesn’t seem like a good background,” said Tlhakudi.

Mantsha’s resignation from Denel was confirmed in early March 2018, just days after Brown was replaced as public enterprises minister.

Several months after quitting Denel, Mantsha was speaking on Zuma’s behalf as a senior in his legal team.

On the very first day of the inquiry’s proceedings an emboldened Mantsha stood before Zondo as Zuma’s attorney.

“I want to make it clear that we do not want to delay this process… we have no intention of stalling this process,” said Mantsha on Monday 20 August 2018.

Before Zuma’s sole appearance at the inquiry to date, Mantsha said Zuma was “relishing” the prospect of testifying in order to “expose” legal and judicial abuses.

Zuma has since booted Mantsha as his attorney and replaced him with Eric Mabuza, who has also represented former tax commissioner Tom Moyane.

In April 2020, Zuma announced the change via a statement issued by the JG Zuma Foundation.

It said it was in Zuma’s “best interests to part ways” with Mantsha in order to prepare for his criminal trial. Zuma expressed his “unreserved trust and confidence” in advocate Muzi Sikhakhane SC, who remained a member of his legal team.

As for not delaying or stalling the process, Zondo has authorised a summons compelling the former head of state to testify over five days in November.

In reply, Mabuza on behalf of Zuma announced a plan to argue for Zondo’s recusal as presiding officer of the inquiry.

Evidence on Denel continues on Tuesday 27 October from 10am when former supply chain management executives Celia Malahlela and Dennis Mlambo are set to testify. DM