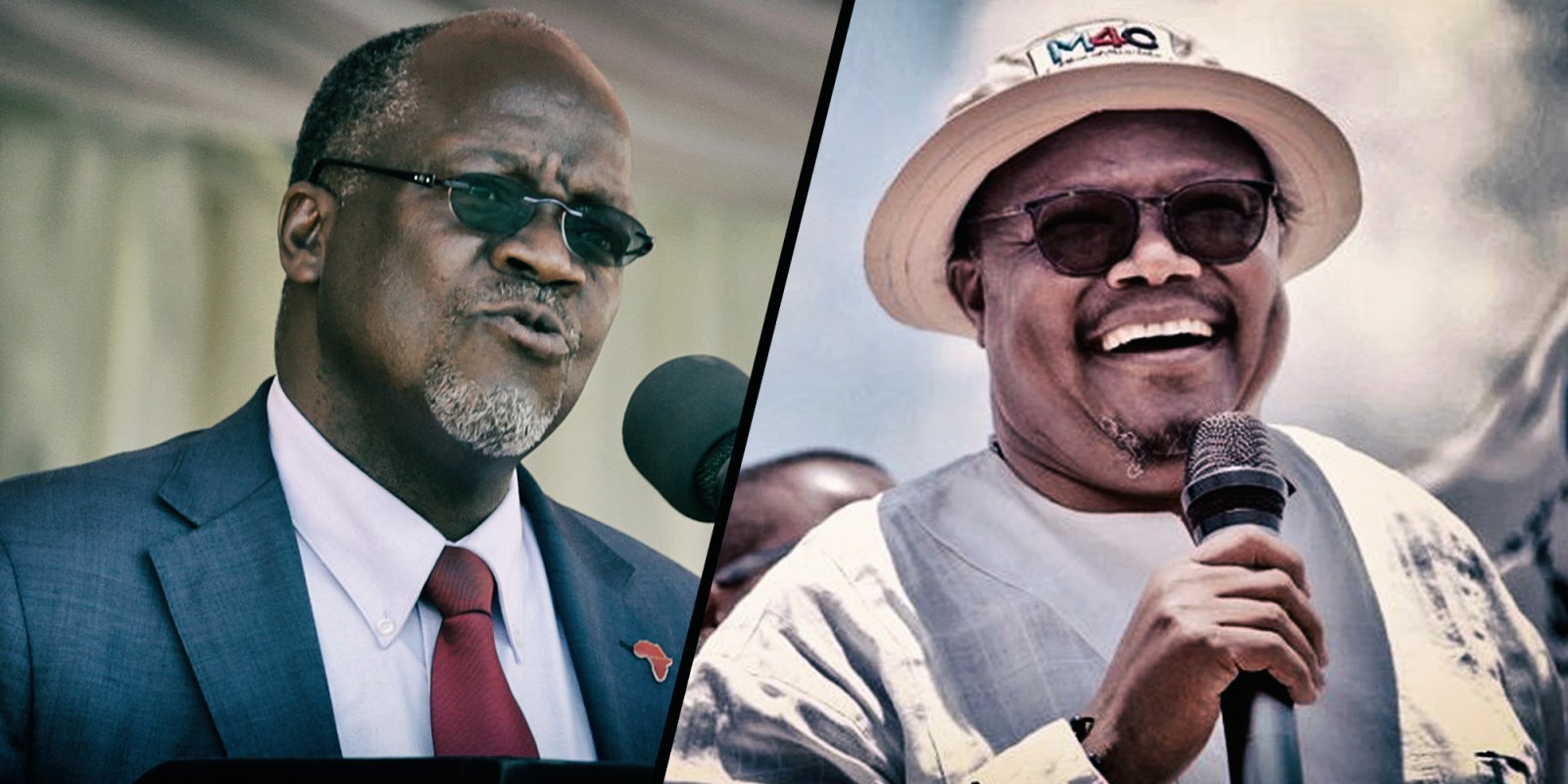 Tanzania’s ‘back from the dead’ candidate has put a spoke in the wheel of sitting president John Magufuli’s bid for re-election.

The people of Tanzania are providing a remarkable lesson in democracy to those who have become jaded and cynical about African elections.

The conventional wisdom ahead of the election on 28 October was that President John Magufuli would be impossible to defeat because he had spent five years knocking the stuffing out of a demoralised opposition.

He has silenced independent and social media, constrained political parties, abused the legal system to lock up and extort businessmen, and used violent thuggery against opponents.

It is difficult to see the Chama Cha Mapinduzi Party (CCM), one of the longest-running governing parties in the world, handing over without a fight. Magufuli’s running mate, Samia Suluhu Hassan, told voters last week that even if the majority votes for someone other than Magufuli, they should “rest assured CCM will form the next government”.

International media and Africa analysts long ago declared no contest. Africa Confidential predicted that “years of restrictions and violence against the opposition make President Magufuli a shoo-in for re-election in October”. But the Tanzanian people in their hundreds of thousands have begged to differ, showing that resistance to Magufuli and the spirit of the opposition is thriving.

The spark that ignited the opposition is the “back from the dead” campaign of Tundu Lissu, candidate of the Chama Chama Cha Demokrasia (Chadema) Party. Three years ago, Lissu survived a hail of AK47 bullets in the driveway of his home in the parliamentary compound. He had multiple operations in exile to reconstruct his body. Three months ago, he wheeled his suitcase to departures at Schiphol Airport in Amsterdam and, flying unaccompanied in economy class, returned home to compete for the nomination of his party.

The courage to come back despite warnings that assassins were still out to get him woke up sleepy Dar es Salaam, and thousands greeted him at the airport.

After securing the Chadema nomination, Lissu has been barnstorming the country in a display of raw grassroots energy. His campaign message is simple: this is a referendum on Magufuli and people want “freedom, justice and people-centred development”.

His fiery speeches have drawn massive crowds, even in Chato, Magufuli’s home village, defying a bid by hoodlums to disrupt the event and beat up Chadema members.

How was this possible when elite opinion was convinced the opposition in Tanzania was moribund?

Lissu, who started in politics by exposing mass killings and forced removals by a gold mining multinational and spent much time in a hospital bed in Leuven, Belgium, never lost faith. He was visited by delegations and tried to maintain contact with party members as best he could.

“Because we were forced to fight for our lives, we dug deep into the soil,” he says. “The masses stayed quiet and did not make a noise because they realised this was not child’s play. Magufuli tried to break us. But the spirit of resistance did not disappear – it just went underground.”

Magufuli at first relied on the usual tactics of voter suppression by the National Electoral Commission, which found reason to disqualify hundreds of opposition candidates while not striking out a single CCM candidate. But it never became more than a two-horse race between Lissu and Magufuli and, with Chadema supporting ACT in its Zanzibar stronghold, the main opposition parties have agreed to cooperate informally.

As Lissu’s campaign has moved across the country, the governing party has grown increasingly panicky, as can be seen by stepped-up attempts by security forces to attack and tear-gas rallies, a week-long suspension of his campaign on specious charges of making objectionable comments and a huge uptick in troll activity on social media.

It is a campaign run on a shoestring budget with minimal resources and an almost complete media blackout, including no TV. Lissu estimates they are spending one dollar for every thousand spent by CCM.

Contacts in every region have given Chadema a good indication of how they are doing, which they can assess against previous electoral performances.

Chadema is confident that if there is anything resembling a free and fair election, it will get between 60% and 70% across the board. This could just be an idle boast, but we don’t know because the government banned independent opinion polling years ago after a survey showed Magufuli’s support was dropping.

During the last election, with their monitoring teams arrested and locked up on election night, Chadema’s official tally was 42%. An 8% swing would put them in the majority.

Chadema’s traditional stronghold is the Great Lakes region, where the party expects a landslide. They are also predicting they will win big in the south, where two years ago Magufuli sent the army in to confiscate cashew crops at gunpoint from farmers. And they are ahead in Singida, Lissu’s home region.

The governing party is doing slightly better in Dar es Salaam, thanks to massive spending on infrastructure. Yet Chadema expects to come out ahead. The party believes it will split the votes on the coast but probably lose in Tanga. Chadema will struggle in patches of rural central Tanzania.

Chadema is confident that if there is anything resembling a free and fair election, it will get between 60% and 70% across the board. This could just be an idle boast, but we don’t know because the government banned independent opinion polling years ago after a survey showed Magufuli’s support was dropping.

Reports have emerged of millions of ghost voters being added to the voters’ rolls and of fake ballots being transported to polling places ahead of the election. The country’s mobile phone operators have been ordered to block all messages with the names of Lissu and other opposition members in the text. Army units disguised as police have been deployed to act as a buffer between the polls and opposition agents seeking to verify the results. And a heavy military contingent including tanks has been dispatched to the island of Zanzibar where crowds chanted this weekend: “We are no longer scared. Better Corona than CCM”.

What is more certain is that Tanzania fashions itself as a multiparty democracy until the opposition wins an election. This is what happened in Zanzibar five years ago when the election was cancelled without reason because the opposition Civic United Front (CUF) was winning.

Faced with a choice of rallying the masses or negotiating a political settlement, the CUF went for talks and ended up getting nothing.

Lissu warns that “if they try to cheat and defy the will of the people, we’ll summon the people on to the streets. The people will not accept anything else.”

What he is predicting is akin to the peaceful protests in Belarus. Nothing remotely like that has happened in Tanzania.

The party has already put out feelers to emissaries for the military, says Lissu. “We are telling them that no one needs to fear for their positions as long as they do the right thing: be neutral in this fight. They should not give military assistance to those who have lost the backing of the population.”

The mere fact that Lissu has been able to come this far is an indication that Magufuli is not immune to pressure. The international community might be called upon to assist, despite the distraction of a US election a week later. Tanzania is a long-standing donor darling of the West and its track record under its revered founder Julius Nyerere in an often turbulent region has placed it among the most tolerant and peace-loving countries. But that frame is shifting.

The international community is capable of diplomatic pressure and economic sanctions. Let’s hope it will not take blood on the streets to get them to support the will of Tanzania’s people. DM168

Phillip van Niekerk is the Washington, DC- based President of Calabar Africa.