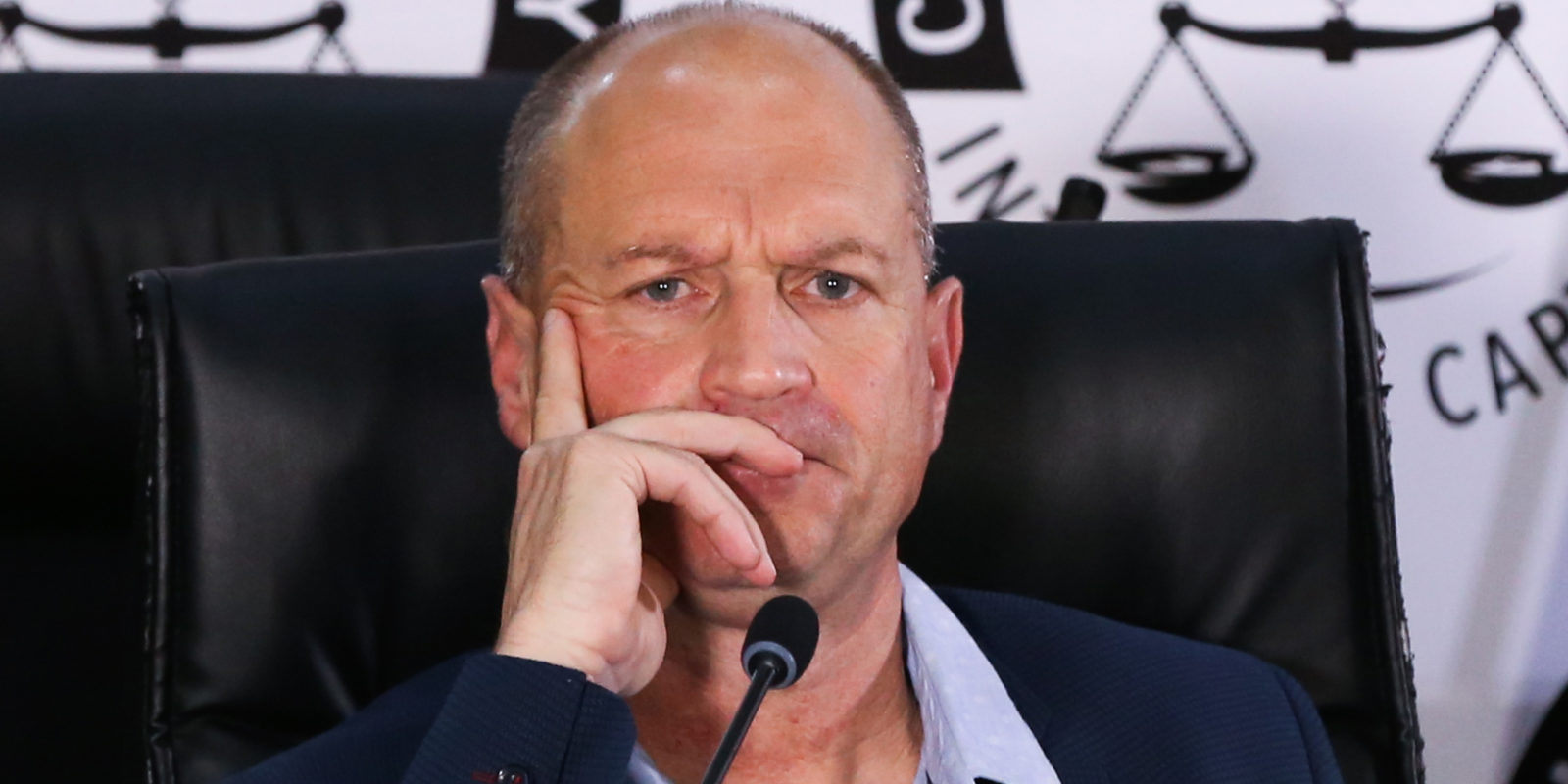 Behind-the-scenes haggling tarred Transnet’s multi-million rand manganese project in 2013. Two pushy businessmen are said to have claimed ‘Number One’ wanted them in on the deal. Gupta ally Salim Essa allegedly dominated then CFO Anoj Singh in an April 2013 meeting about the project.

Transnet’s multi-million rand project to improve its manganese rail network was tarnished by a pernicious ploy in 2013.

Anoj Singh and Gary Pita of Transnet, Gupta ally Salim Essa and two brazen businessmen, Nalen Padayachee and Dave Reddy, are among those implicated in the alleged plot.

Hatch partnered with Transnet on the ambitious two-phase project to expand and improve its manganese rail network, and increase export capacity to 12 million tonnes by mid-2017.

On Tuesday, 21 May 2013 then Transnet CEO Siyabonga Gama announced the first phase of the project as part of a R27-billion investment.

The development of the port of Nqura in the Eastern Cape into a world-class manganese export hub was among the aims of Transnet’s manganese expansion project (MEP) in 2013.

Gama said, “This is a new heavy-haul line that we are bringing to bear.”

Behind the scenes, however, businessmen Padayachee and Reddy were allegedly vying for an exclusive deal with Hatch, with the apparent backing of Transnet’s Singh and Pita.

One month before Gama’s public announcement at the Chamber of Commerce and Industry, Gupta associate Essa allegedly ran a meeting about the MEP.

Bester testified Essa, who was not a Transnet employee, ran a meeting he expected Singh would lead.

Essa is a close business associate of the Gupta family, whose name has rung out time and again at the State Capture Inquiry’s proceedings since August 2018.

In April 2013, Bester and his Hatch senior Alan Grey went to Melrose Arch understanding they would meet Singh to discuss the MEP with Transnet.

Bester said he and Grey sat in disbelief during the “bizarre introduction” as Essa allegedly held court.

“Mr Singh was sitting there, very well-dressed in a suit and tie, and Mr Essa was controlling him and, you know, he was sitting there as if he can, almost as if he [Essa] can only talk to us when he is allowed to talk. It was very strange,” he said.

His evidence shows throughout 2013 various attempts were made to force Hatch into partnering with Padayachee and Reddy by way of an irregular pact.

Three options for ‘Number One’

Bester testified that the two had insider information on the MEP. They allegedly insisted ‘Number One’ wanted Hatch to appoint their company as a supplier developer (SD) partner.

In order to work with Transnet, international company Hatch was required to assign 30% of the work to an SD partner as per BBEEE requirements.

Interestingly, Transnet increased the SD partner’s portion of the MEP to 50% as recorded in a confinement document.

According to Bester, Transnet insiders knew of the project at the time he received a cold call from a pushy businessman on Friday, 19 July 2013.

“I received a call from Mr Nalen Padayachee […] he just indicated he would like to come and see me about the Manganese project and the details were not discussed on the phone,” said Bester.

“They told me we need to include them as part of our supply development into our confinement for phase one Manganese expansion project,” said Bester.

Padayachee and Reddy arrived as if they had been dispatched, he claimed. Padayachee was MD of PM Africa Project Management. Reddy was CEO of Development and Engineering Consultants (DEC).

“At the time it was very concerning because they gave me a lot of facts about the project which I thought at the time was confidential to Transnet,” said Bester.

The two businessmen were reportedly determined to strongarm Hatch into appointing their unincorporated joint venture (JV) as the SD partner for the Transnet MEP.

Bester said, “They indicated there was a wish from Transnet and they were sent by ‘Number One’ that they need to be part of our supply development component.”

“Did they say who ‘Number One’ was?” asked evidence leader Advocate Lee Segeels-Ncube.

Bester testified he asked Reddy who was ‘Number One’ and “he said you can figure out” who it was.

“And did you have any idea who ‘Number One’ could be?” continued Seegels-Ncube.

“Well, I mean, obviously at the time in the media everybody referred to Mr [Jacob] Zuma as ‘Number One’ but in my world for Transnet it was either Mr Anoj Singh or Mr Brian Molefe that was ‘Number One’ so it was between those three,” said Bester.

Bester recalled he asked the two about their skills, and received a worrying offer.

“Mr Reddy indicated to me he’s got a lot of engineers in India that can help and I recall telling him that, you know, supply development is not about growing skills in India. It’s a South African initiative,” he said.

The meeting concluded with an agreement Padayachee would email a memorandum of understanding (MOU) to Bester.

After the meeting Bester reported to his senior Grey, who was similarly uncomfortable about the pitch from Padayachee and Reddy.

Padayachee emailed Bester an MOU the afternoon of Thursday, 25 July 2013. Its contents worried Bester and Grey.

Before replying they arranged a meeting with Rudi Basson, the relevant project director at Transnet.

On Friday, 26 July 2013 the two Hatch representatives raised their concerns with Basson. Deirdre Strijdom, then executive manager of capital development at Transnet, was also present.

Bester said he and Grey informed Basson of the meeting of Monday, 22 July 2013 and mention of an endorsement from ‘Number One’.

Basson reportedly said Singh wanted Padayachee and Reddy involved in the MEP. The meeting ended after Basson assured the Hatch representatives, “Leave it to me.”

Within hours, Transnet’s position was clear.

Bester said, “It must have been later that day that he [Basson] came back and said me something to the effect, ‘Sign the damn thing.’”

Padayachee, said Bester, was unhappy with the changes. A meeting followed on Monday, 5 August 2013.

During the meeting, which Reddy attended, Padayachee reported Transnet’s finalisation of confinement to Hatch was imminent.

Padayachee  reportedly said he would email Bester a revised MOU, as Grey’s version was unacceptable. According to Bester, he insisted Hatch agree to the new terms.

In a tight corner

“I understood it that we [were] being [held] ransom. Transnet is not going to approve the confinement unless we approve the revised MOU,” said Bester.

After the meeting, Bester called Strijdom seeking to escalate a complaint, and seek advice from Transnet insiders.

Less than two months since the Padayachee and Reddy met Bester at the Hatch premises in Woodmead, Johannesburg the MD was extremely anxious.

“I had fear of physical harm that was gonna be imposed upon myself, because of just the pure, the tone of the meetings and the conversations by phone,” said Bester.

Payachee sent Bester a third version of the MOU which including express mention of the MEP. Next, claimed Bester, Reddy applied further pressure alluding to ‘Number One’ again.

When Bester made it clear Hatch would not fold, he said Reddy upped the ante. “I had several calls from Mr Dave Reddy which I didn’t answer,” he said.

Once Strijdom was aware of Hatch’s concerns, she arranged a meeting with a senior lawyer from the office of Molefe, Transnet’s Group CEO in early August 2013.

“We told her everything,” says Bester.

Shiceka reportedly took pictures of the MOUs, asked that details of Hatch complaint be sent to her private Gmail account, and advised the matter should be left with her. Her promises that the matter was being addressed rang hollow.

Another incident in the same building proved Transnet seniors supported ‘Number One’ in terms of the JV of Padayachee and Reddy being the preferred SD partner.

Bester claimed he and Grey visited Transnet’s head office at the Carlton Centre, expecting to meet Singh. However, Pita held the meeting in Singh’s stead.

The interaction grew heated, as the two men from Hatch told Pita if Transnet did, indeed, wanted the JV to be the SD partner in the MEP that position must be recorded in writing.

Bester claimed Pita wanted Padayachee and Reddy favoured, and Pita was adamant he would not record the order to writing.

All the more puzzling to Bester and Grey: Pita led procurement for Transnet, whereas Hatch dealt with the procurement lead for capital projects regarding the MEP.

They couldn’t understand why the project was receiving such high attention, said Bester. Hatch did not sign an agreement with Padayachee and Reddy for phase one of the MEP.

Bester testified Reddy called him to arrange a meeting about phase two of the MEP. As with the April 2013 meeting, Essa made a surprise appearance and called the shots.

Essa allegedly order Bester to make him and his company Hatch’s SD partner for phase two of the MEP. Bester claimed Essa announced, “You are going to give me R18-million.”

Bester queried the figures Essa cited for phase two of the MEP.

“Don’t worry I am going to make sure you get the project, we are going to have it inflated to R2-billion,” Bester claimed Essa replied.

Bester testified Essa boasted about an upcoming appointment at Eskom, to prove just how much control “they” wielded over parastatals.

“He told me that they have already decided who is gonna be the next CEO of Eskom, and I will clearly see it when it happens that, what the power is that they have and how they make decisions,” said Bester.

“And who did he say that person would be?” asked Segeels-Ncube.

“He said they had decided Mr Brian Molefe will be the CEO of Eskom,” replied Bester.

Bester’s evidence reflects the fraught climate at Transnet in 2013. His testimony demonstrates the vested interests inside and outside the Carlton Centre.

Transnet’s lucrative project was designed to improve a strategic rail network, transporting an ore which South Africa is uniquely positioned to trade.

Evidence on allegations of state capture, fraud and corruption at the parastatal continue on Wednesday, 21 October 2020. DM

JSE Investment Challenge 2021: Students up their risk game and tap into derivatives

Book Review: Do not disturb the narrative that is the Rwandan economic lion