The day freedom came for the Rivonia Trialists, 31 years ago 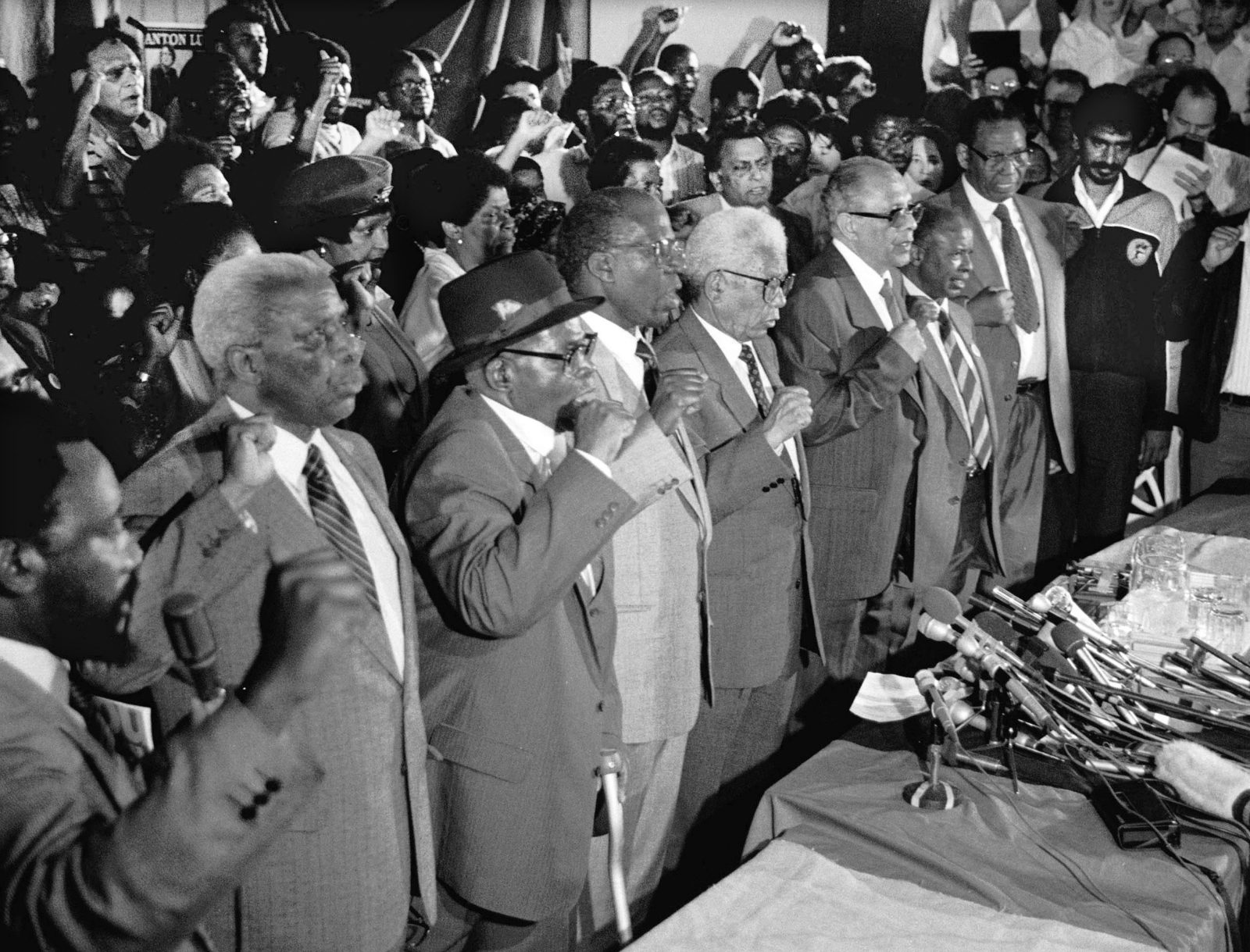 DO NOT USE THIS PIC, IT WAS A ONCE-OFF USE ONLY Soweto, Johannesburg 15 Oct 1989. Stalwarts of the struggle, ANC members sentenced to life imprisonment with Nelson Mandela in the Rivonia Trial. At a Welcome Home rally on the day they were released from prison. L-R Front row, Cyril Ramaphosa, Raymond Mhlaba, Oscar Mpetha, Andrew Mlangeni, Walter Sisulu, Ahmed Kathrada, Elias Motsoaledi, Wilton Mkwayi and Jay Naidoo. Behind them, Winnie Mandela, Alberta Sisulu. Freedom fighters. (Photo: © Eric Miller)

It didn’t happen in a vacuum; rumours had circulated about the release of Nelson Mandela and his Rivonia Trial comrades for years. Here and abroad, activists and anti-apartheid organisations championed their cause.

ANC stalwart Govan Mbeki was the first to be released, in November 1987, but a rally organised to welcome him home was blocked by the government because no gatherings were allowed.

After that, a few false alarms circulated that Mandela was “about” to be released, which had many of us rushing to Pollsmoor and later Victor Verster prisons to document the momentous event.

My Christmas Day 1988 was spent outside Victor Verster with a bunch of media colleagues.

In October 1989, when word went out that the Rivonia Trial prisoners were about to be released, we had good reason to be sceptical. But the information and sources seemed solid, so when I was instructed by my news agency in Johannesburg to fly there, I was overjoyed. I hired a car and headed directly to Walter Sisulu’s home in Soweto.

Word on the ground was that there would be an all-night vigil outside Sisulu’s house in anticipation of his arrival. I got to the house in the evening. Or rather, I got near the house… Given the crowds assembling in Kliptown already, I parked the car nearby and footed it to the house. The mood was jubilant. I spent some hours quietly “floating” around near the house, watching and listening to what was happening in the dark streets, and getting more than a little frustrated at the limits the dim light put on my ability to shoot pictures.

It was extraordinary. A joyous eruption of all the hope, expectation and anticipation that had been building up in the country over the years: During the Defiance Campaign, through the States of Emergency that were called and imposed. All of that pressure – the call and response of protest, opposition to the detentions, tortures and deaths – felt as if it culminated in a night of rapture.

And the reception was nothing short of rapturous… the floodgates of hope had opened.

As the night outside Walter Sisulu’s house progressed, I was energised and hyped by the non-stop singing, chanting and dancing. The constant drumming and dancing of the toyi-toyi. No one in the area slept that night (much as I tried, periodically in the car).

At the same time I was also anxious: what if there was a repeat of the Govan Mbeki experience? How would the community here react? What might happen if the promised releases did not manifest?

But shortly after 5am, in the beautiful first light of dawn, a combi van with Sisulu inside pulled up at the doorstep of his home, Albertina waiting.

It was surreal, almost shocking; a collective that had not been still or silent for hours, held its breath for a few beats as the almost beatifically smiling old man stepped through his gate for the first time in over 26 years.

The Sisulus embraced, as a cacophony of cheers erupted and spread far back to people who couldn’t see or hear the tumult at the gate.

A couple of hours later, my first films safely messengered to the local Reuters office for processing and distribution, I rushed to Lenasia, arriving in time for Ahmed Kathrada’s homecoming with just minutes to spare. Another round of adulation from the crowds, the reunions, long hugs, tears of pain and joy, with various friends and comrades.

That evening the first free gathering of the other Trialists and prisoners who were also released during the day was held at the Regina Mundi Church in Soweto, jam-packed, with no room for a body to move.

A crushed congregation of sweating bodies, a community hyped with excitement to see for themselves the real faces of leaders most had only ever heard of, or been told about by elders.

A crowd desperate to verify for themselves and the country the long wished- for, dreamed-of reality of a milestone signalling impending freedom. DM/MC

Eric Miller is a long-time photojournalist who cut his teeth during the 1980s Struggle. Since then, he has worked across South Africa and large parts of Africa for local and foreign clients. His Facebook page is populated with images, memories and observations, old and current. This story started as one of his regular Facebook posts marking significant anniversaries in South Africa.