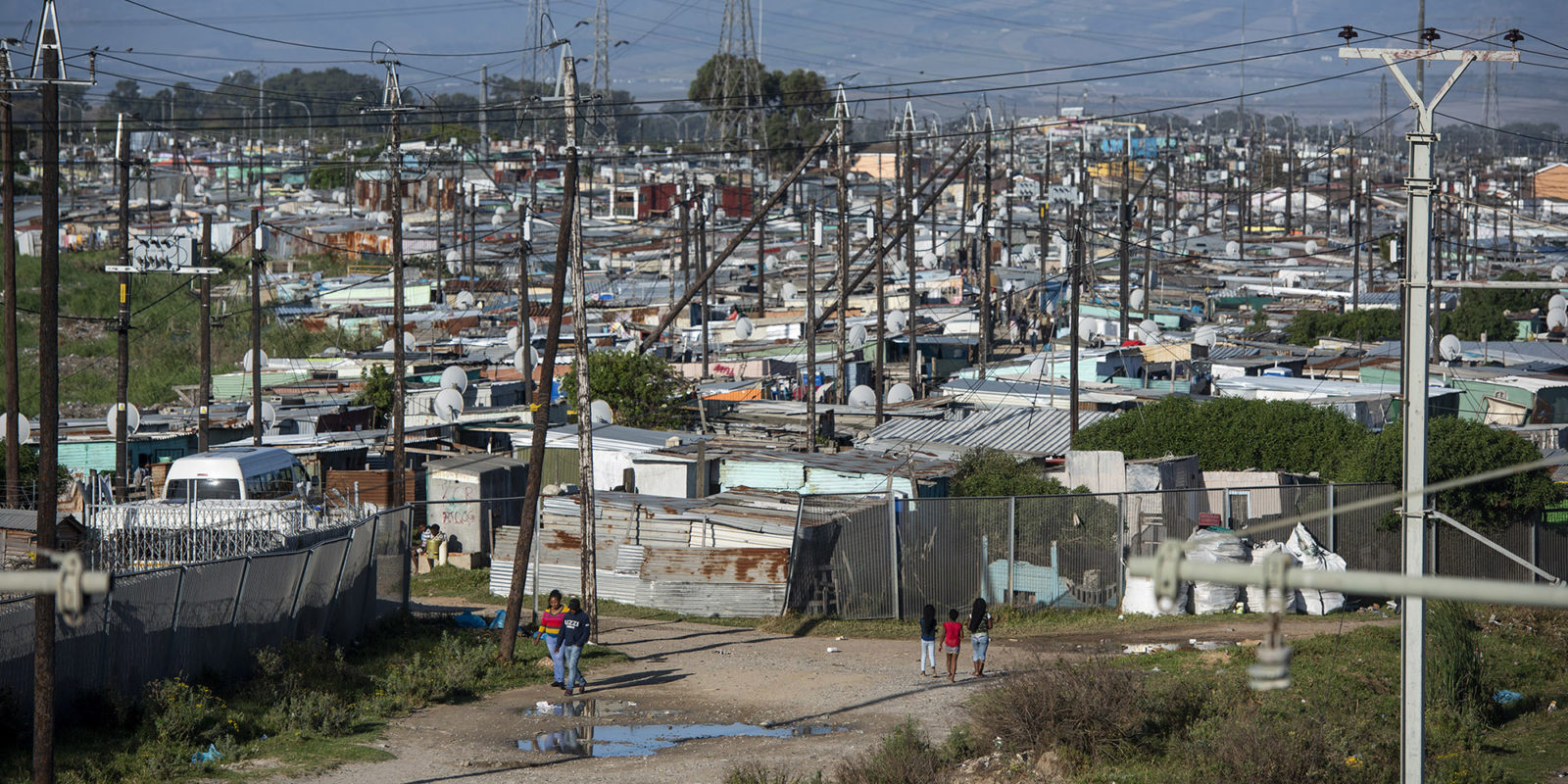 It is easy to blame the poor for occupying vacant land when you live in the suburbs. (Photo: David Harrison)

The reality is that people need houses now. We cannot live on a housing list. Instead of using the available land to address the backlog of housing in Cape Town, the City decides to sell land to private owners for profit. Land in the city has been used for the benefit of the few elite.

Black and coloured people, who are the majority in this country, have been robbed of their right to access land by the colonial system and the injustices of apartheid.

The recent occupations of land by ordinary poor people is a result of the failure by the national government to address the issue of land reform. Unfortunately, the interim leader of the Democratic Alliance, John Steenhuisen, refers to these occupations (“Property rights and the rule of law the wisest way forward”, Business Day 3 September 2020) as politically motivated and an attempt to make the city of Cape Town ungovernable. He further criticises our social movement, Reclaim the City, for supporting such occupations.

We are not surprised by Steenhuisen’s comments on this matter. The DA sees land as a commodity that can be bought and sold. They do not seek to redress the injustices caused by both apartheid and colonialism. It is easy to blame the poor for occupying vacant land when you live in a suburb of Durban or Cape Town.

It is easy to blame us when you do not know what it is like to live in a leaking shack with minimal or no services at all.

By the way, this is where similarity exists between the ANC and the DA. Both parties have referred to the poor – who are occupying vacant land so they can have a roof over their heads – as politically motivated criminals.

This is criminalisation of the poor who are trying to survive in a city that does not recognise their existence.

The Western Cape provincial authorities and the City of Cape Town have continually blamed the poor and working-class for their own failure to address apartheid spatial planning by building much-needed housing, particularly in the inner city where work opportunities are located.

The housing list that Steenhuisen is referring to does not work. People have been on the list for many years and are still living in shacks.

The reality is that people need houses now. We cannot live on a housing list. Instead of using the available land to address the backlog of housing in Cape Town, the City decides to sell land to private owners for profit.

Land in the city has been used for the benefit of the few elite.

Tafelberg is an example of this. This piece of land, earmarked for affordable housing, was sold to a private Jewish school by former Western Cape premier Helen Zille.

One needs to remind Steenhuisen that the occupation of Ahmed Kathrada House (Helen Bowden Nurses’ Home) and Cissie Gool (old Woodstock hospital) was as the result of the sale of Tafelberg. These two occupations were a form of protest to stop the sale of this piece of land.

Steenhuisen blames the occupation for “completely stalling” the progress of social housing. We are appalled by the DA’s stance regarding these occupations, where essential services have been withdrawn in order to constructively evict the poor who are occupying these properties. He further accuses the poor, who are building shacks on vacant land in order to have a roof over their head, of jumping the housing queue.

He says these occupations are denying law-abiding citizens the opportunity to access housing. This is fascism at its best. This is an attempt to make poor black people fight among themselves because those who are on the “waiting list” will think that the provision of their houses is stalled by those who occupy land.

The recent judgments in the Western Cape High Court have vindicated the poor by stopping the brutal evictions that left many people homeless. The first judgment states that the City does not have the right to demolish people’s homes during the lockdown – whether occupied or unoccupied.

The other significant judgement is the Tafelberg case, in which the court set aside the sale of the land.

In March 2019, both the provincial and local government admitted that they have not built social housing in the city since the advent of democracy.

Many promises have been made but not fulfilled by both the City and provincial government. Former MEC for housing, Bonginkosi Madikizela, promised to build 10,000 affordable housing units in the inner city and neighbouring suburbs like Bo-Kaap, Tamboerskloof and Oranjezicht.

In July 2018, the City suggested that affordable housing would be built on 11 sites in the inner city. Cissie Gool House (old Woodstock hospital) and Ahmed Kathrada House (Helen Bowden Nurses’ Home) were among the 11 sites which were earmarked for affordable housing.

The court judgment has proved that the City of Cape Town is violating the rights of the poor by illegally evicting them from their homes. The Tafelberg judgment questions the City on how it uses its land. The court has agreed with Ndifuna Ukwazi and Reclaim the City that the City disposes of land for profit.

These two victories have proved that the City does not put people first. In Cape Town apartheid spatial planning is still visible. Those who have been displaced by apartheid and colonialism continue to live under inhumane conditions. The majority of blacks and coloureds continue to live on the outskirts of the city.

We welcome the invitation in the joint statement by premier Alan Winde and Public Works MEC Madikizela to meaningfully engage with us. We have always believed that it is through meaningful engagement that we will be able to address the issue of housing in Cape Town.

We will write a letter to Winde and Madikizela requesting that such a meeting takes place as soon as possible.