The people are hungry – When will you listen, Mr President? 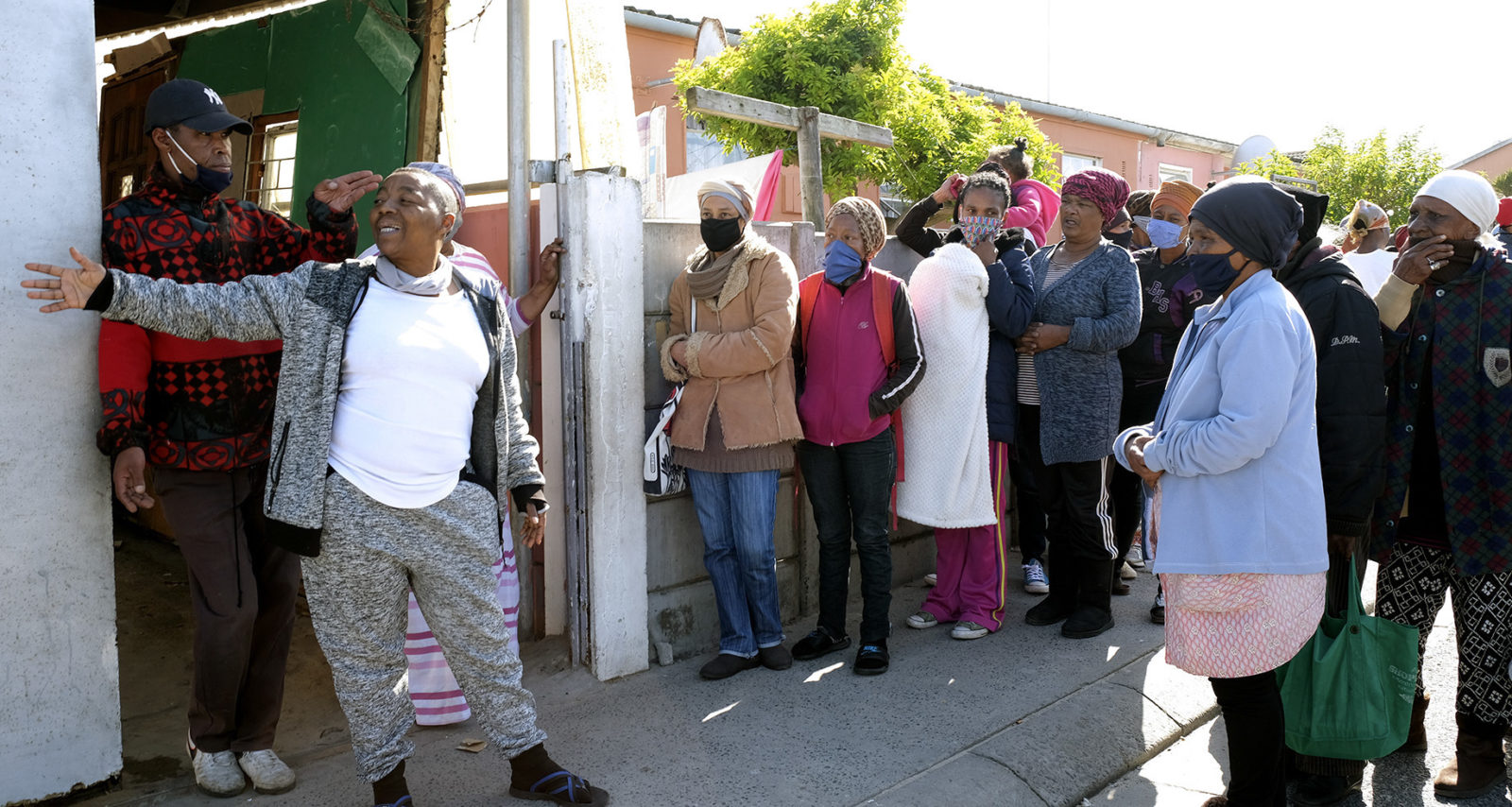 This Friday is World Food Day. It comes at a time when millions of people in South Africa face daily hunger and millions more fear hunger will get worse if special Covid-19 grants are ended this month. In this guest editorial, frontline activist Joanie Fredericks sets out the challenges that confront our communities every day, and appeals to President Ramaphosa to listen to activists who are battling to protect people’s rights to sufficient food.

I have been an on-the-ground activist for over 30 years. Growing up in the rural farming community of Grabouw, roughly 70kms outside Cape Town, I witnessed many human rights abuses. Even in my own childhood home, abuse was the order of the day.

The abuse I witnessed and personally experienced drove my passion to one day become a human rights lawyer. My path changed course but did not veer too far from my dream. Many years ago, when I moved to Tafelsig, Mitchells Plain, the poverty and hardships experienced by the community struck a chord inside me.

I felt obligated to help in any way I could.

I started a non-profit organisation that dealt with socioeconomic issues on a holistic level. I did this with funds I raised myself, with the assistance of sponsors and donors. Today my feeding scheme is operational and extends beyond the borders of Tafelsig.

Tafelsig Mitchells Plain CAN (TMPC) was established at the start of lockdown Level 5 when the country’s hunger crisis began. When President Ramaphosa announced Level 5, there seemed to be no proper planning or thought beyond the immediate implementation of this lockdown.

Many families surviving on weekly wages did not have time to prepare for such an emergency.

Our government assured everyone that they had measures in place to protect us, and everyone had faith that we would be okay. The president made it clear that he had the wellbeing of the most vulnerable as his first priority. But almost immediately it became apparent that this was not the case.

Apart from the appalling looting of the Covid-19 funds, other government departments were not performing at all – at a time the most vulnerable needed them more than ever. For example, there has been much uncertainty and confusion surrounding the process to apply for the R350 Covid-19 grant. To date, many people who applied have not received a single cent due to red tape, unclear procedures, uncertainty of the requirements, faulty government systems or databases that have not been updated.

In the meantime, the lines forming at feeding stations grew longer and longer. People were now, more than ever, reliant on feeding schemes and soup kitchens.

Another blow caused by Level 5 was that many people who were employed lost their jobs. These people, together with their extended families, were now forced to join the queues for food on a daily basis.

TMPC recognised the need not just in our community, but countrywide. TMPC has 22 feeding stations in the Tafelsig and Eastridge areas in Mitchells Plain. We are not government funded and as a result we are completely reliant on private funders and sponsors.

TMPC had many NGOs, feeding schemes and soup kitchens reaching out to us for help, as private funders and sponsors themselves had fallen on hard times and were unable to continue supporting such causes.

I, together with my Change Champions, feed up to 10,000 people per day.

However, this has become increasingly difficult as the numbers continue to grow and the food becomes less. It is heart-wrenching to turn away grown men, humble women and crying children. The humiliation of having to stand in a queue for food, only to be told that there is no more left, breaks the human spirit even more – as if starving is not enough.

It was during the first week of the 21 days of hard lockdown that I personally witnessed the suffering and starvation in my own community.

Without hesitation I started my own fundraising campaign and within my network I managed to help my community with the assistance of countless supporters.

My frustration in seeing my community suffer led me to make a video to President Ramaphosa to address this crisis – a HUNGER CRISIS. This video went viral, which led to the president’s office reaching out to me. However, six months later, nothing has come of this.

Instead, what has happened is many other feeding schemes and soup kitchens countrywide, who saw this video, started approaching me and expressing their frustrations as they were facing the same issues.

Comedian Marc Lottering became aware of my plight and offered to help in any way he could. So did Siya Kolisi, who was escorted to my home by the Mitchells Plain police station commander himself. Marc witnessed firsthand the suffering in the community. This inspired him to write the song “What About the People” which was performed by artist Craig Lucas, winner of The Voice South Africa.

My 22 Change Champions span the Tafelsig and Eastridge areas where we, on average, feed 10,000 people a day.

This is done solely through donations from organisations and individuals.

We are currently on lockdown Level 1 and many of us have returned to a ‘new normal’ way of living. It is only now that the true extent of the damage done by the pandemic can be seen.

There are millions of people across the country who no longer have jobs to return to, and even worse is the fact that our economy has shrunk due to businesses closing down.

Poverty has increased exponentially and there seems to be no more middle class – instead the gap between wealthy and poor has just become even greater.

There have been several initiatives started by activists in order to help not just my own community, but those in need in other parts of the country. I am inundated with several calls, emails and WhatsApp messages every day from people asking for assistance – people from as far as Nelspruit – people asking for food.

So what has happened since?

I am in the process of filing a class action suit against the president to hold him accountable for the actions of his Cabinet. Too many times, low-level officials have been thrown under the bus and used as scapegoats. It was his very Cabinet that was responsible for the looting and theft of many millions of rands meant for the poor. Even in the midst of doing this, I cannot afford to stop my fundraising efforts.

Community activists step up to fight hunger: If we don’t feed the community, who will?

I have formed lasting relationships with donors and organisations that have pledged to help me during these tough times.

One such relationship is with Shoprite. Shoprite has pledged to send their soup truck, when it’s available, to the Tafelsig community to help me feed at least 500 people. My organisation is also a beneficiary of Shoprite’s surplus food programme conducted at one of their stores in Mitchells Plain.

Another relationship is with Ladles of Love, who have always been there right from the beginning, even in their most dire financial situation. They have been steadfast in their support to our community in providing sandwiches and other stock on a weekly basis. Donors and supporters have come and gone, but Ladles of Love remains.

I would like to include a special shout-out to Liesl Loubser and The Change Collective Africa team for all their support during the darkest moments when I was so tired and would not have been able to carry on without them pulling me back up and assuring me that I’ve got what it takes to keep on making a difference.

It would be impossible to name each and every person and organisation that has supported TMPC over the last six months, but we want to give special thanks to Community Chest for everything they have helped us with.

I have been able to highlight the plight of the many millions starving in South Africa on various platforms like the Ahmed Kathrada Foundation, the Progressive Blacks in Information Technology (PBICT), the women’s annual inaugural indaba and many others.

I am all about sustainable solutions to the hunger crisis and such thinking has led me to partner with Organic Earth Solutions, who are sponsoring a range of “gardens-in-a-box” and vertical gardens.

This partnership will be launched on International Food Day, 16 October 2020, as part of the initiative to assist people to feed themselves.

When will government listen to the people?

The most frustrating part of all of this is that government is unwilling to listen to me or, apparently, to anyone. Community leaders like myself are able to assist government in helping the needy; the most vulnerable.

In a telephone conversation with Dr Neeta Behari from the president’s office, she admitted that politicians are not trained to deal with these situations.

Right now, I do not just have the most vulnerable knocking on my door, but also people from all walks of life. Government officials refer people to me for assistance when they are unable to help. Ambulance drivers are transporting people to hospital, not because of medical reasons, but because people are literally weak from hunger.

Homeowners, people with good jobs… the list is endless: we are all affected by this pandemic. People could not afford to buy food, much less pay their bonds, because they were not earning salaries during lockdown.

I am at my wits end and so are millions of other South Africans – especially when the politicians tell us to do the Jerusalema on Heritage Day instead of addressing the SERIOUS issue of hunger and starvation.

I will not stop holding the president accountable, because too many people depend on me.

WHEN WILL YOU LISTEN, MR PRESIDENT? DM/MC

Joanie Fredericks can be contacted at [email protected]