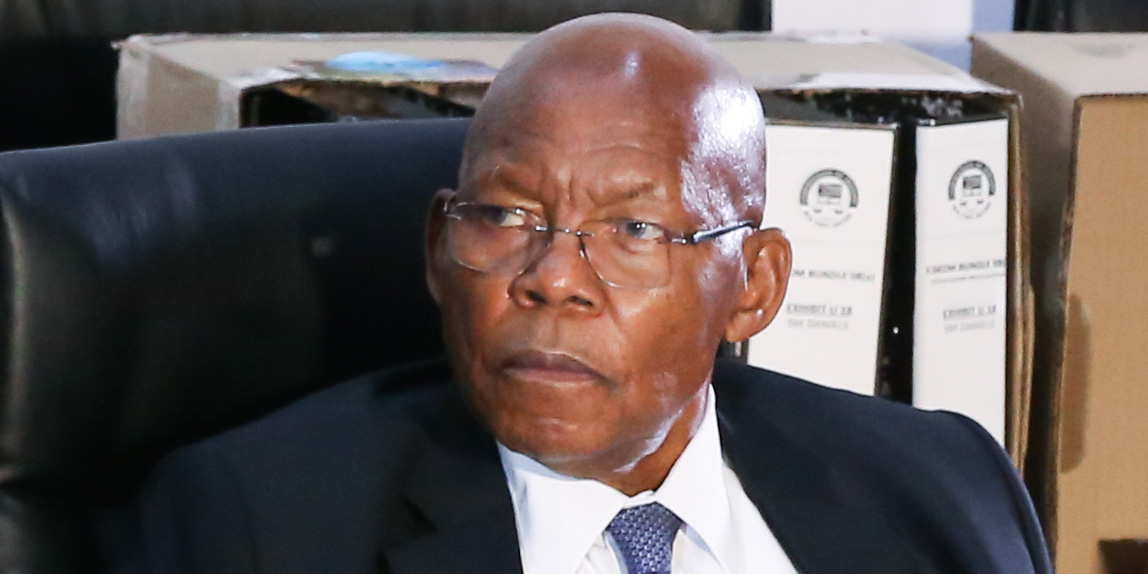 Former Eskom board chairperson Ben Ngubane testifies before the Zondo Commission. Ngubane said Salim Essa approached him at a restaurant in 2013. Essa joined Ngubane’s company Gade Oil and Gas so the two could partner on a lucrative oil deal. (Photo by Gallo Images/Luba Lesolle)

The evidence leader at the State Capture Inquiry tugged on Dr Ben Ngubane’s strings when he asked the former Eskom board chairperson about his links to the Gupta family, Oakbay Investments CEO Nazeem Howa and Gupta lieutenant Salim Essa.

Former Eskom board chairperson Dr Ben Ngubane insists he was not vulnerable to Gupta lieutenant Salim Essa’s manipulation in 2015, even though years before the pair had worked on a planned oil deal in the Central African Republic (CAR).

Ngubane returned to the State Capture Inquiry on Tuesday 13 October. He had previously testified about his association with Essa years before he joined Eskom.

Echoing what he told Parliament’s committee on public enterprises in 2018, Ngubane told the inquiry chairperson, Deputy Chief Justice Raymond Zondo, that Essa approached him at a restaurant in 2013. Essa joined Ngubane’s company Gade Oil and Gas so the two could partner on a lucrative oil deal.

“It was a business relationship,” said Ngubane of his interactions with Essa, who was going to arrange an associated trip to the CAR. However, because of ongoing strife in the CAR, the project was abandoned and Essa resigned from Gade Oil and Gas, said Ngubane.

Ngubane declared his association with Gade Holdings upon joining Eskom, but failed to list subsidiary Gade Oil and Gas, which linked him to Essa. Ngubane claimed his failure to declare the subsidiary was an innocent mistake.

Tuesday’s proceedings oscillated between strained and chucklesome. Zondo was briefly gripped by a fit of giggles during the afternoon, whereas the morning’s sitting was sombre.

While working at the national broadcaster, Ngubane interacted with members of the Gupta family. He was invited to the Guptas’ social events, including the family’s lavish 2013 Sun City wedding. Like Ngubane, Howa worked in “the media space” and so the executive knew of the Oakbay Investments CEO.

Essa’s associations with Ngubane proved a significant concern during Tuesday’s proceedings, and the witness grew increasingly hostile to the propositions (that is, theories) raised by the evidence leader.

A disgruntled Ngubane said, “At one stage I was sitting on about 23 companies. That doesn’t entitle people to make me a puppet. I mean, if those associations are going to be linked with undue influence, that’s wrong.”

In late March 2015, Howa sent Essa two emails, each containing an attachment. The second, sent on 30 March, included a draft statement to be issued by Ngubane, which Essa was to approve. It reflected inside knowledge of privileged deliberations by Eskom’s board over the suspension of four executives, and Tsotsi’s departure.

Ngubane and the former head of legal at Eskom, Suzanne Daniels, sent confidential Eskom information to the email address [email protected] whose recipient is sometimes referred to as “businessman”.

Faced with correspondence he sent to the account in September 2015, Ngubane testified he understood the infoportal email address to be that of the director-general (DG) of Public Enterprises, Richard Seleke. However, Seleke only began work as DG on 1 December 2015.

“Well, I did acknowledge, Chairperson, that I had not made the link in terms of time when this infoportal email address was used,” admitted Ngubane.

“The probability is that it was not him,” Zondo said of Seleke.

Daniels has testified that the email address, as suggested by the name, was a repository for information. She claimed it was accessed by various individuals. The evidence leader advanced the widely held view that Essa controlled the infoportal account.

Seleka (distinct from Richard Seleke) raised the opinion of an expert witness tabled during Eskom’s disciplinary inquiry into Daniels’ conduct, and evidence gathered in the Fundudzi report. Both deemed it probable that Essa managed the email account.

Seleka quizzed Ngubane about an email of Monday 28 September 2015 that he sent to the “businessman” email address. In it, Ngubane wrote: “herewith as discussed” in reference to an attachment. Seleka asked: to what discussion did the phrase refer?

“Chairperson, I said quite emphatically I never had a discussion on this document,” replied Ngubane. He said the attachment (which the inquiry does not have) was a letter from the then minister of public enterprises, Lynne Brown.

This is a dangerous proposition you are making and therefore I reject it.

Seleka observed that only made matters worse, because it suggested “businessman” was working with Brown. “It gives all the more credence to Ms Daniels’ evidence that Mr Essa introduced himself as Minister Brown’s adviser,” said Seleka.

Ngubane’s demeanour altered throughout this leg of Tuesday’s proceedings. He said there must be experts in South Africa who could trace the domain of the “infoportal” email address to finally determine the “businessman” identity. “We need to do whatever can be done,” agreed Zondo.

Seleka evidently detected Ngubane’s growing resistance to the line of questioning and said the witness should not be upset, as it was necessary to offer Ngubane an opportunity to respond. Zondo supported Seleka and told Ngubane, “He is right to say, ‘Don’t be upset.’”

Ngubane said that to his knowledge, no members of Eskom’s board were associated with Essa. Seleka said that gave credence to the proposition that the only person who could help Essa make inroads into Eskom’s board would be Ngubane, who emailed Essa at the “infoportal” address.

Ngubane’s reply was brusque: “This is a dangerous proposition you are making and therefore I reject it.”

“As far as you knew, you were the type of person who had that type of relationship with them previously,” continued Seleka. Ngubane agreed.

Zondo then said: “It may be at some stage that Seleka or some other lawyer will say to me, Chairperson, when you assess the evidence with regard to what happened here, the evidence is such that you must find there were people who were outside this board who were making decisions for this board or manipulating this board.”

At this, Ngubane alluded to Jacob Zuma. “We know the origin of the decision to suspend executives. We know. Mr Tsotsi told us precisely what he was instructed to do, who was going to do this. Mr Tsotsi told us that there was a big, thick document in the Presidency about how this inquiry must be conducted.”

Ngubane argued that the board acted on documents that appeared sound and credible.

“I’m trying to say the issue of being a master plan behind this could have been, but what we acted on were documents management had prepared for the board,” he said. DM