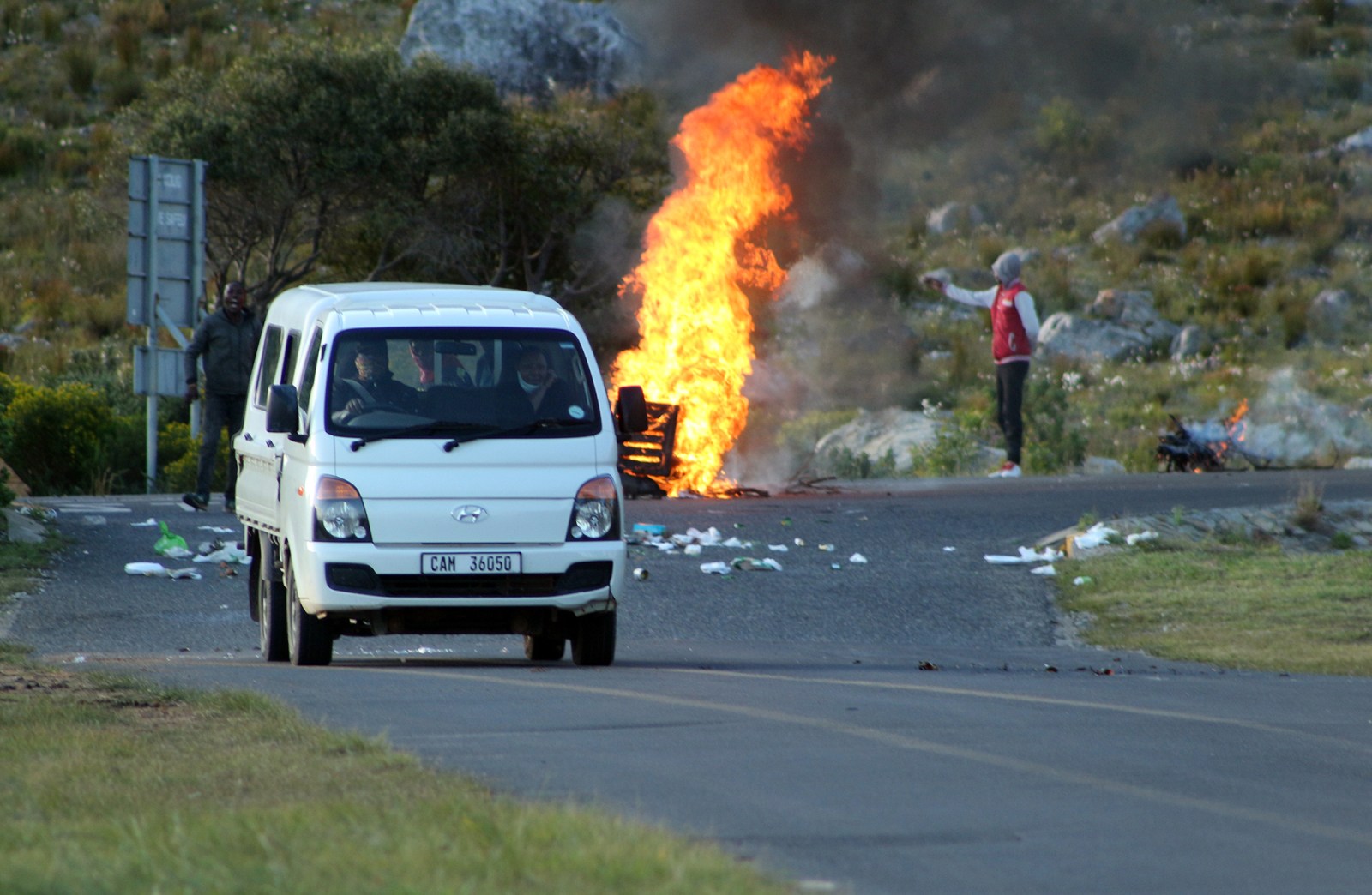 Kleinmond’s Main Road was closed on Monday after residents protested following an operation by the police’s Crime Intelligence Unit during which five arrests were made. Photo: Overstrand Herald

Journalist, political economist and Daily Maverick columnist Ismail Lagardien was seriously injured on Monday evening after protests erupted in the Overberg area of Kleinmond following the arrest of five alleged perlemoen poachers. Lagardien is in hospital awaiting surgery for a broken jaw sustained when a brick was thrown through the passenger window.

One person has been arrested for public violence in Kleinmond, near the town of Hermanus, following protests that erupted on Monday. The protests were in retaliation for arrests made in connection with abalone poaching.

Daily Maverick columnist Ismail Lagardien was in the area when a brick smashed through his car window early on Monday evening. Speaking from his hospital bed on Monday night, Lagardien told Daily Maverick his jaw was fractured and he had several teeth missing. He was awaiting surgery.

Relaying events via text message on Tuesday morning (he was unable to speak audibly due to his injury), he wrote: “I saw a roadblock and tyres being laid out, so I drove through, towards the informal settlements to find out more.”

At the time he had his equipment and camera out. “That’s when the rock came through the passenger window,” he said.

In excruciating pain, Lagardien drove to nearby Pringle Bay and asked someone to call an ambulance. He was taken to hospital, where it was confirmed that he had a chin fracture and a broken jaw.

Captain FC van Wyk from SAPS Western Cape told Daily Maverick: “Members attached to the Western Cape Integrated Team assisted with a Crime Intelligence-driven operation with sea fisheries on abalone… five arrests were made for possession of abalone and diving equipment was seized.”

Van Wyk said during follow-up operations at an informal settlement called Overhills, “members were attacked and stones thrown at them”.

The coastal town in the Overberg area, about 100km from Cape Town, is well known for being an abalone poaching hotspot. Abalone, also known as perlemoen, is a prized delicacy in Asia and poaching syndicates have been operating in the region for decades.

Ward councillor for the Kleinmond area Grant Cohen said he was awaiting a report on injuries and damage sustained in the protests. Reports indicate that the area is calm at the moment.

Cohen said that on the evening of Monday 5 October, “we met with community leaders at the police station”. The leaders had requested that police release the person who had been arrested for public violence. Cohen said this wasn’t possible as the person needed to appear in court on public violence charges.

Cohen said he was aware that cars had been damaged in the protests, and had received complaints of people in the informal settlement being shot with rubber bullets.

In August 2020, Nkosinathi Dana, head of monitoring and surveillance at the fisheries department, told CapeTalk that 13 poaching-related arrests had been made between April and August in the Kleinmond area. DM