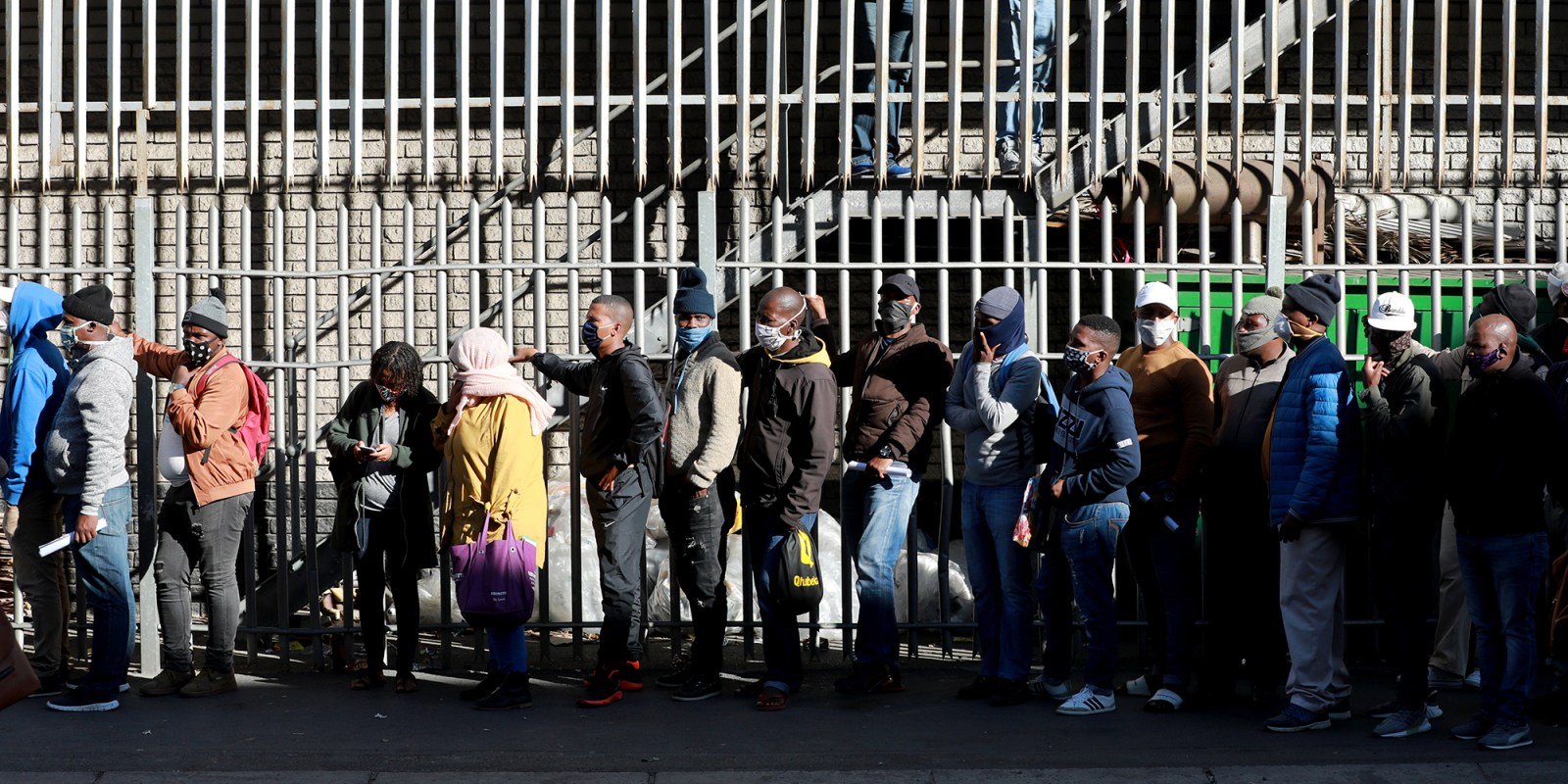 People queue at the Department of Labour to claim money from the unemployment insurance fund on May 04, 2020 in Cape Town, South Africa. (Photo: Gallo Images/Nardus Engelbrecht)

By June, the Covid-19 economy resembled that of a post-civil war country with unprecedented levels of hunger and joblessness, particularly in rural South Africa and particularly among women.

“We only see these sorts of changes and economic shocks as a result of civil war,” says Nic Spaull, the principal investigator for the NIDS-CRAM survey which has released its second wave of research on 30 September.  The NIDS-CRAM study is a nationally representative survey of the employment and welfare impacts of the pandemic.

The 2.8-million jobs lost in the first wave of results in April did not bounce back by June even as the Covid-19 lockdown eased and more of the economy opened up, taking unemployment to lows not seen before. It is likely that, at an expanded level, joblessness is now at over 50% with youth unemployment probably at 70%.

Such a high joblessness rate, especially among young people is leading to a humanitarian crisis, says Spaull. Researchers had expected a bleak picture as they started to tally the economic costs of South Africa’s hard lockdown but not this bleak.

“We are reporting here on the changes from Lockdown Level 5 in April to Level 3 in June. No one was expecting all the jobs to come back but we were expecting at least some uptick as we started to ease out of lockdown. “Unfortunately for people that were retrenched that doesn’t seem to be the case,” says Spaull.

The research also reveals a second layer of job losses: Half of furloughed workers (those with employment but without pay) got their jobs back but not all of them and not as many as expected. “Maintaining some employment relationship appears to have been crucial for recovering employment after the lockdown. However, this was less true for those who were ‘temporarily laid off’ in April compared those who were on ‘paid leave’.  While most individuals who were placed on paid leave had returned to work by June, less than half of those who were temporarily laid off returned to work, with about 40% falling into non-employment,” says Ronak Jain of Harvard University who compiled the employment paper with three fellow researchers.

The number of furloughed workers is 1.4 million people which amounts to about 600,000 people who lost jobs in this category.

Fewer people hungry but still too many without food

There are few silver linings in the research but there was an improvement in the story of hunger that the first wave revealed.

“Hunger has come down by 27% for adults and children – it’s the big positive story from the research,” says Spaull.  By June, the people who told researchers they could not put food on the table had declined by almost a third compared to the truly bleak picture from the hard lockdown Level 5 impacts.

It’s still insanely high in a middle-income country and this statistic alone is an X-ray revealing how the economic story of South Africa for 2020 is likely to be that of deepening inequality.

A key factor driving hunger among children was that when schools were shut down, so were feeding schemes that are key to keeping young people fed and healthy.  “Only 25% of respondents indicated that a child received a school meal in the last seven days, compared to 80% pre-Covid,” says the research report. This despite the fact that feeding schemes were meant to be operational – as per court order to the Minister of Basic Education. While the latest GDP figures showed that agriculture was a sector which held up well, hunger in rural South Africa was deeper than in the towns and peri-urban areas.

Spaull says this may be because of the exodus out of the cities to rural areas ahead of lockdown. A reason that chronic hunger began to abate was that the relief measures, like the UIF’s temporary employment relief scheme and the Covid-19 grant took effect.

The relief of distress

The Covid-19 social relief of distress grant of R350 per month had a halting start because of administrative problems, but when it got working, it worked well.

“The grant has brought millions of previously unreached individuals into the system, and application for and receipt of the grant have been relatively pro-poor,” report Timothy Kohler and Haroon Bhorat of UCT. The poorest households received the highest number of grants (which is how it should be) but the report also notes downward social mobility where Covid-19 has pushed people down the class ladder.

One of the better gains of the democratic era is that people have been lifted from extreme poverty through a mixture of social support, better primary healthcare and employment equity policies. But Covid-19 may have reversed these gains, creating a landscape that once again looks like an apartheid schema of deep cleavages of race and class with black rural poverty.

Riding in Covid’s slipstream have been other impacts – the researchers report a doubling of anxiety and depression rates as well as a widening access gap between wealthy and poor children to early childhood development centres (creches or pre-schools).

“This (the impact of additional grants) raises a huge policy conundrum,” says Spaull.  “The new Covid grant has covered a previously uncovered group of unemployed young men. What will happen come October when this new grant is meant to expire? It’s critical to extend these grants to stave off hunger. But the longer you leave that door open, the harder it is to shut. Treasury is acutely aware of this.”  Pre-Covid, South Africa paid 18 million grants a month to about 12-million beneficiaries (some people and households receive more than one) and there are now four million more grants being paid. “There seems to be a restructuring of the labour market with a shrinking centre and a growing periphery – the employed who have jobs and income, and the unemployed who have grants. Covid is amplifying the best and worst features of our society; a really successful grant system that was steadily expanding anyway and now has a huge leap forward, and an economy that has always struggled to absorb labour and has now shed millions of jobs. It has exacerbated all our inequalities,” says Spaull.

The Big Four inequalities that have never properly been bridged by freedom are wider than before – that is the inequalities of race, gender, geography and education.

“From February to June 2020, workers who were poor, rural, female, unskilled and less educated have experienced the largest declines in employment,” the report finds.

And only one in four workers reported they could work from home, usually the best-skilled city-dwellers. The numbers of waged respondents who said they did not have the option of working from home was 76%, while the highest rates of reported ability to work from home were seen among white respondents (79%), those with post-matric qualifications (40%) and older workers (those aged 50 to 59 years old).

The lowest rates of those able to work from home were for black Africans (16%), those with matric or less (15%) and those living on farms or in traditional areas. The ability to work from home signals the highest likelihood of continued employment and skill, probably in the most resilient parts of the economy. And what the numbers reveal is that is too small a part of the labour market leading to higher not lower inequality. Various studies show that South Africa has among the highest Gini Coefficients, the global measure of inequality, in the world.

“South Africa has always struggled to create jobs. Between 2009 and 2019 there were about 2.4 million new jobs created as the economy grew. Has a decade of progress been wiped out in the space of six months?” asks Spaull.

Where does hope lie? Spaull says that Wave 3 of the research should show if the easing of the economy to Level 1 will lead to any of those jobs returning and whether the expansion of grants may have further eased hunger and slowed downward social mobility.

The big question he says we must ask is how to restart the economy and how to create jobs, and not to lockdown again. “We must never do a lockdown again – the costs are too high. The problem is that we never saw the lockdown as a short-term measure to prepare the health system but treated it as a way to stop infections.