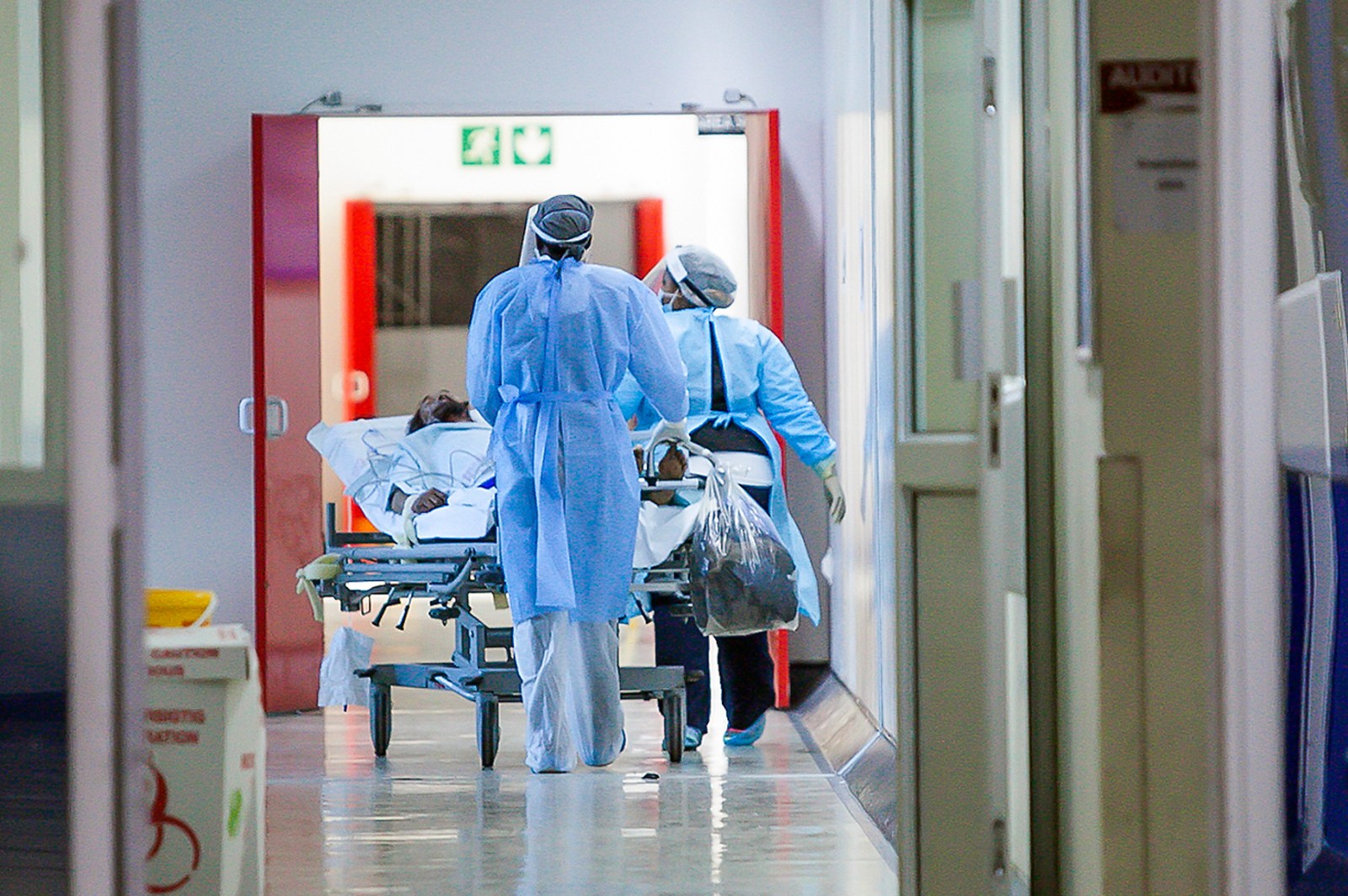 JOHANNESBURG, SOUTH AFRICA - JULY 02: A general view of hospital staff on duty at Charlotte Maxeke Johannesburg Academic Hospital on July 02, 2020 in Johannesburg, South Africa. It is reported that the Gauteng Department of Health unveiled a 29 bedded ICU ward fitted with modern equipment at the hospital will serve as a specialized training facility for medical, nursing, allied medical and paramedical staff and will also benefit COVID-19 patients during the pandemic. (Photo by Gallo Images/Sharon Seretlo)

How many people have actually died of Covid-19 in South Africa and what do we know about the possibility of a second wave? As the first, and hopefully the only, substantial wave of infections and death recedes, Spotlight Editor Marcus Low assesses the many remaining uncertainties.

In its latest weekly mortality report, the South African Medical Research Council (MRC) estimates that there were around 44 400 excess natural deaths in South Africa since early May. It is not known how many of these deaths were due to Covid-19. Is it 30 000? 40 000?

For now, we just don’t know.

What is clear enough, though, is that as in other countries, the number of confirmed Covid-19 deaths (15 953 as of 20 September) is an underestimate of the total Covid-19 deaths. For counted or confirmed deaths to be lower than total deaths is not surprising. Such a gap has been a feature of HIV and TB statistics in South Africa for years, and it would be strange if we did not see the same pattern with Covid-19.

With TB deaths, StatsSA reports around 29 600 deaths (in 2017) based on death certificates, but the World Health Organisation (WHO) estimates 63 000 (in 2018) in total (the situation with Covid-19 is slightly different since death reports have not yet been processed, but it is the same type of issue).

The early epidemiological modelling by the South African Covid-19 Modelling Consortium, projected between 34 000 and 50 000 Covid-19 deaths. Given the 44 400 excess deaths since May, it is certainly plausible that Covid-19 deaths will be in the predicted range – although more research is needed before we will know with much certainty.

Either way, with so many deaths and over 650 000 confirmed infections (the total infections will be much higher), Covid-19 has clearly turned out to be much worse than just another flu. Normally total flu deaths in South Africa are around 11 000 – although it is likely to be lower this year.

What about a second wave?

But we certainly cannot take it for granted that these numbers will not go up again. It is not implausible that, as larger meetings and more travel are again permitted under South Africa’s level 1 lockdown, transmission may again increase. Recent evidence of second waves in other parts of the world is not at all reassuring. Maybe the epidemic in South Africa is different in some important ways, but based on current evidence from other countries it would be foolhardy to assume we will be spared a substantial second wave.

But even if we do not have a substantial second wave, we may nevertheless have flair-ups in some communities and these flair-ups may well claim more lives. Accordingly, it remains important to follow the advice on continued mask-wearing, social distancing and other measures, even if we are lucky enough to find ourselves in a best-case scenario.

That said, there are some tantalising glimmers of hope suggesting that our epidemic might just be different in important ways. One recent seroprevalence survey found that 40% of 2 700 blood samples from people living with HIV and pregnant women who rely on the public healthcare system in Cape Town contained SARS-CoV-2 antibodies. Last week, Minister of Health, Dr Zweli Mkhize, said that government’s modelling suggests that around 12 million people in South Africa have been infected (around 20% of the population). It is tempting to jump to the conclusion that with so many people presumably now immune, the virus will find it much harder to spread – and that a second wave, should it come, will be much smaller than the first.

But the evidence is not really there yet.

The available seroprevalence surveys in South Africa do not represent the general population – neither have the findings yet been published in a reputable scientific journal. We have not seen the calculations behind the 12 million estimate, but given how little seroprevalence data we have to work with, the estimate must by necessity be extremely uncertain. It is quite possible that the real percentage of people with SARS-CoV-2 antibodies in the country is substantially lower than 20%, or maybe even lower than 10% for that matter.

Similarly, there have been some positive signs on how Covid-19 immunity works, but for the most part it is still very uncertain how long immunity lasts and what level of immunity people will have. We can’t entirely discount the possibility that by next year this time, many people who now have SARS-CoV-2 antibodies may again be susceptible to infection and disease. On the other hand, we also can’t discount the possibility that significant numbers of people have some form of pre-existing immunity.

For now, we just don’t know for sure.

However, one thing we can be quite certain of is that the uncertainties about Covid-19 will become fewer over time and as more research is conducted. Inevitably we will learn more about immunity as more people are exposed to the virus for a second time and as there are longer periods between infection and reinfection.

Maybe in the coming months we will find new treatments to add to our arsenal of evidence-based interventions like high-flow nasal oxygen, dexamethasone and remdesivir. Maybe in a few months or a year from now, one or two of the many vaccines being tested will be found to provide acceptable levels of protection. Probably political interference in science will continue to muddy the waters for some time to come – although the extent of this will depend on what happens in the United States elections in November.

Yet, even though so much about the Covid-19 pandemic and the road ahead remains uncertain, some things are clear enough. Maybe most important for now, is that fewer people are dying now than were two months ago. At least this is something that is both certain and unequivocally good news. DM/MC

*Low is editor of Spotlight.