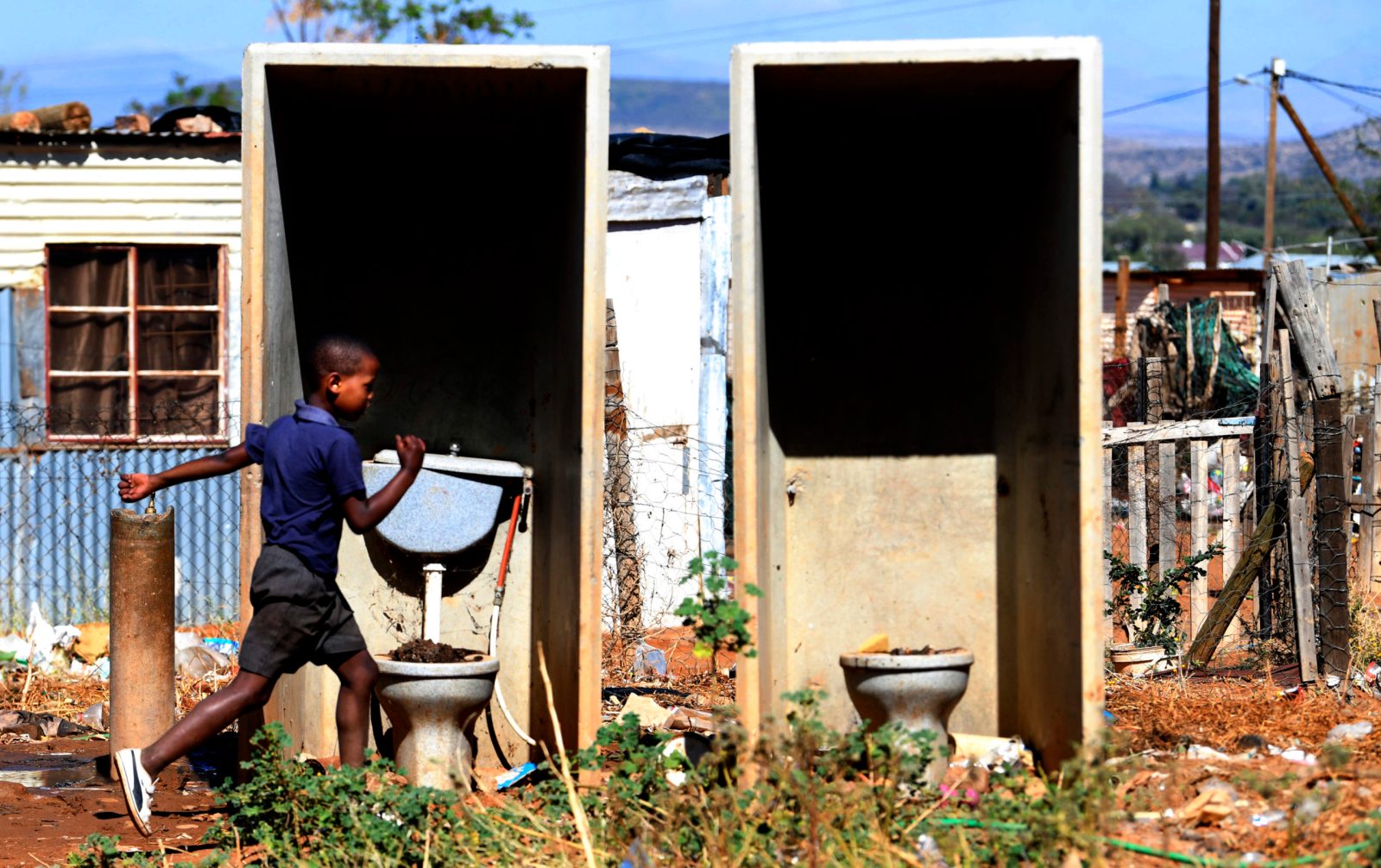 A child runs past the only two toilets provided for the community of Riemvasmaak in Graaff-Reinet. (Photo: Theo Jephta)

Over the next few months, as South Africa prepares for local government elections in 2021, Maverick Citizen will be documenting the failure of local government in several municipalities, starting with the Dr Beyers Naudé Local Municipality in the Eastern Cape. Over the next two weeks, we will run a series of stories on how the municipality, based in Graaff-Reinet, has caused a number of acute and ongoing service delivery failures.

These failures have brought several communities to their knees, deepening already alarming levels of poverty and leaving vulnerable elderly and women-headed households without water and electricity due to red tape, secrecy and an acrimonious relationship with their municipality.

“The people of Riemvasmaak have been abandoned to find their own way to survive,” community leader and convenor of the Graaff-Reinet Action Committee Sias Smith said.

In March 2020 Smith led a protest to the municipal offices with demands including that the living conditions of people in Riemvasmaak, Blikkiesdorp and Vrygrond were improved. With only limited access to water, broken and blocked toilets creating a health hazard, and a vigilante-type system with residents selling the properties of those who leave the area for too long, the people of Riemvasmaak have been all but trapped.

Communities of hundreds of people were provided with two toilets each.

In theory, they are part of the 96.5% of people in the municipality who, according to the 2016 household survey done by Statistics SA, have access to flush or chemical toilets, but in practice they should be added to the 1.1% of those who do not (the survey found 1.1% of households had no access to any form of toilet whatsoever).

Another community, Vrygrond, also only has two toilets for hundreds of people, but their toilets still work.

“It is a totally unacceptable situation,” Smith said. “It has been 26 years since the dawn of democracy in this country and we still have communities like these who have been abandoned and forgotten. The provision of sanitation and electricity should be prioritised.”

In a planning document published in July 2020, the Dr Beyers Naudé Local Municipality, however, claimed that it had provided eight communal toilets to informal communities but failed to mention that the two at Riemvasmaak were no longer operational.

The area has no formal streets and while residents try to keep their yards neat, uncollected rubbish litters the area.

At the centre of the rows of shacks, there are two toilets provided by the municipality. Both are out of order, have filled with excrement and are crawling with insects. The only tap in the community is next to these toilets.

“What is also terrible is that they can’t leave,” Smith said. “If you leave for too long they will sell your plot and your shack. There was a girl here whose baby became ill and they had to go to hospital. When she came back a few weeks later, someone had sold her house and her property.”

Johanna Afrikaner, 48, arrived in Riemvasmaak in 2011. At the time a councillor was selling plots on which people could build shacks.

Her shack overlooks two broken toilets that were constructed for the community that totals several hundred people, mostly women and children.

“We had a lot of trouble to find somewhere to stay when we first arrived here from Jansenville,” she said. “We build this little shack here.”

Afrikaner still works as a domestic worker in town but she is one of the few people in the community who are still employed.

She is strict about the children wearing masks and her neat yard has been swept. Next door a neighbour is hanging up washing. The community uses water from the tap next to the toilet to do their washing.

“They built the toilets here, but nobody ever came to clean them. Now they are broken. You can’t use them anymore. They are full. Someone stole the doors the other day. It is a pity that they put the only tap we have next to those toilets. You don’t really want to go there. It is terrible,” she said.

She said the Riemvasmaak community now uses buckets which they empty in the open field above the house. “We have never seen a truck collecting the buckets. I don’t think there is one,” she said. “We are really struggling.”

In its latest annual report, the Dr Beyers Naudé Municipality has identified Riemvasmaak as the top priority for housing development, but added that as housing was a provincial competency “no progress had been made”.

Afrikaner has five children living with her. She said they had put their names on the housing list at the municipality many times. “But they already said they haven’t built this year. And they are not going to be building next year. We have complained a lot, but nothing happens,” she said.

“We don’t have electricity here, but when we can we borrow electricity from the last row of houses that have some,” she said.

Municipal spokesperson Edwardine Abader did not respond to a request for comment but in a response provided to the community after a protest in March, the municipality said housing was a competency of the Department of Human Settlements and that they were just “putting names on the list”.

A report from the town planner stated that Riemvasmaak is among informal settlements in Graaff-Reinet that “will benefit from an upgrade”.

The municipality didn’t address the issue of the broken toilets in their feedback to the communities.

The feedback was provided only on 23 March, after the communities threatened to ask for a motion of no confidence to be tabled against the municipality’s executive mayor, Deon de Vos.

Smith said they had handed over a petition highlighting their grievances, including the broken toilets in Riemvasmaak on 11 March, and De Vos had promised to respond within seven days. He did not.

“Unfortunately he did not fulfil his promise to the communities concerned. The mayor never asked for an extension. When we phoned we learnt that he was in Johannesburg.”

In a letter detailing the threat to have De Vos removed, Smith wrote: “We regard the mayor as grossly disrespectful to the communities… he is a disgrace to the position he is holding and the people he serves. The mayor is bringing the local council into disrepute in the face of communities concerned as well as to the party who deployed him.

“These reasons give the community concerned no alternative but to request the Dr Beyers Naudé Local Municipality Council start a process to table a motion of no confidence in the mayor.”

In its latest version of an Integrated Development Plan for the municipality published in July 2020, the issue of substandard toilets is raised, but no mention is made of the fact that the toilets at Riemvasmaak no longer work.

“All bucket toilets have been eradicated but there are still households in some of the remote areas of Dr Beyers Naudé Local Municipality that are using pit latrines, and not all meet the minimum standard… These settlements fall outside the urban areas of municipal service delivery. Some households are not connected to the municipal sewerage network and still depend on having their septic tanks emptied by the municipality, which is not always a reliable service. Leakages and blockages are being experienced where systems are not being maintained properly, or are mistreated by residents,” the plan says.

“There is only a small percentage of households that have to make use of communal flush toilets that were installed at informal settlements, such as Riemvasmaak in Graaff-Reinet.”

The municipality claimed that there were eight communal toilets and four taps for use among 240 households in Riemvasmaak “and other informal settlements”. Smith said he only knew about the four toilets divided between Riemvasmaak and Vrygrond.

De Vos’ spokesperson Edwardine Abader said the mayor has received two petitions about service delivery failures, and had responded to both.  She did not comment on the time it took to do so. She added that the mayor was not aware of any “threats” of bringing a motion of no confidence against him.

Despite several requests and providing a week for comment on the sanitation problems at Riemvasmaak, the mayor failed to respond.  DM/MC