‘What are we doing this for?’ ask doctors after Abd...

‘What are we doing this for?’ ask doctors after Abdulhay Munshi’s murder 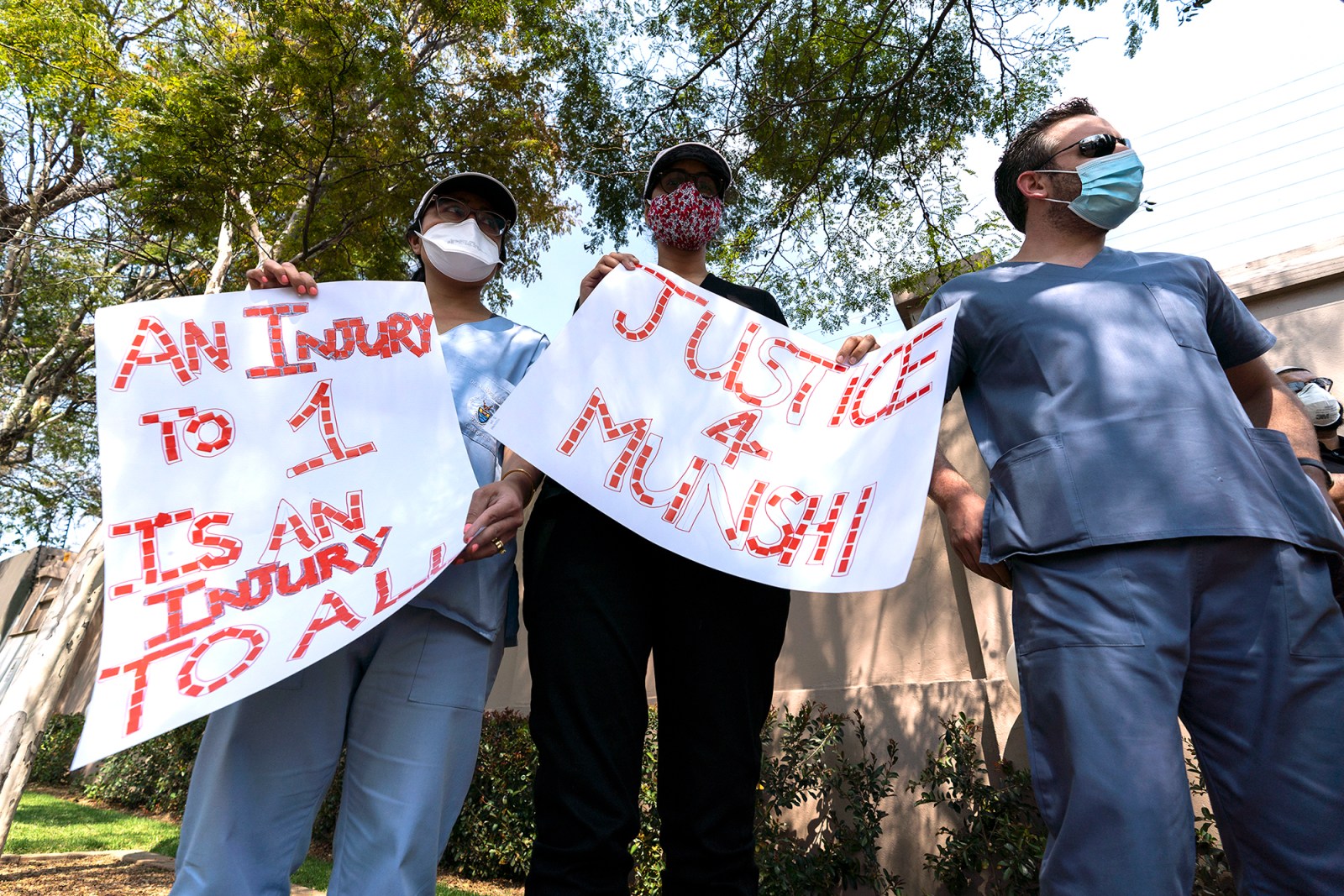 Members of the medical fraternity hold up posters calling for justice outside the house of Johannesburg anaesthetist Dr Abdulhay Munshi. Munshi was gunned down in Orange Grove, 16 September 2020. (Photo / Shiraaz Mohamed)

The medical fraternity is reeling from the murder of Dr Abdulhay Munshi, who was facing a culpable homicide charge for the death of a 10-year-old boy. The motive for the killing is unknown, but doctors are already fearing similar attacks.

The murder of Johannesburg anesthesiologist Dr Abdulhay Munshi has sparked outrage in the healthcare community, with medical associations warning that doctors may avoid treating certain patients in fear of retaliation attacks if those patients die.

Munshi was gunned down in Orange Grove on the afternoon of Wednesday 16 September in what has been described as an assassination. According to reports from News24 and TimesLive, a motorist rear-ended Munshi’s car and opened fire on the 57-year-old after he got out of his vehicle. Reportedly, none of his possessions was stolen.

Munshi’s funeral was held at Westpark Cemetery on Thursday. The SAPS has been tight-lipped on its investigation, saying it has opened a murder case, but cannot disclose the deceased’s identity.

The doctor’s medical colleagues, who gathered outside his home in their scrubs on Thursday, and various medical associations that have released statements have been cautious not to speculate on the motive for Munshi’s murder.

However, they repeatedly mention the culpable homicide charges laid against Munshi and his colleague, surgeon Dr Peter Beale, after the death of Zayyaan Sayed in October 2019.

Zayyaan died after Beale and Munshi performed what was meant to be a routine laparoscopic procedure at Netcare Park Lane Hospital. The boy’s father, Mohammadh Sayed, described having to help Munshi treat his son after Beale allegedly left, despite the boy’s lung having collapsed.

Mohammadh Sayed, chief operating officer at cigarette manufacturer Carnilinx, laid culpable homicide charges against the doctors and the story featured prominently in the media, which led to further allegations against the doctors emerging. The EFF also got involved, demanding the Health Professionals’ Council of South Africa (HPCSA) act against Beale and Munshi.

Netcare and the HPCSA suspended the doctors and they were arrested in December 2019. The criminal case has been postponed multiple times, most recently on 31 August 2020. The pair were due back in court in November.

“The circumstances of the last 12 months is disgusting, actually,” said a 40-year-old doctor outside Munshi’s house on Thursday.

He and other doctors Daily Maverick spoke to asked to remain anonymous, fearing reprisals from their employers and those behind Munshi’s murder.

The doctor claimed Munshi was “crucified” by the HPCSA, the media and his community after Zayyaan’s death. He argued that the HPCSA and NPA acted against the doctors before finalising their investigations and allowing them due process.

In a statement on Thursday, the South African Gastroenterology Society said:

“The speed with which these colleagues were arrested, handcuffed and thrown into a police van and the haste with which the regulator, the HPCSA, suspended them was questionable.”

“The public arrest of the two doctors and their almost immediate suspension, without inquiry by the health regulator, the Health Professionals’ Council of South Africa, was premature. The normal progression of events was reversed, which endangers the everyday practice of medicine in South Africa.”

“This appears to be an organised assassination, the circumstances of which we hope will become clearer through intensive and thorough investigation. This killing is the result of a systematic failure of law and order in our country.”

Multiple doctors Daily Maverick spoke to claimed Munshi and Beale were recently exonerated by the HPCSA, which condemned apparent “vigilante behaviour” on Thursday. The institution, however, suggested its investigation had not been finalised as it had been interrupted by the criminal case against the doctors.

Sama said it had heard that the charges against the doctors would soon be dropped, but the NPA had not responded to an inquiry at the time of writing.

Daily Maverick asked Beale’s lawyer, Jeanne Albertse, whether the doctor had recently received any threats or had taken extra safety precautions after Munshi’s murder. She replied:

“Due to the sensitivity of the matter, my client and I decline to make any comments at this stage.”

An anesthesiologist who had worked with Munshi was cautious about linking the culpable homicide charge to his death.

“We can’t say whether the two incidents are related, but we can speculate that this looks like it was a premeditated hit on a doctor. Who’s behind it, we cannot say,” he said.

Medical associations, which said there have been increasing reports of attacks on healthcare workers, have warned that Munshi’s treatment from the authorities and his murder could lead to doctors approaching patients who are at risk of “negative outcomes” more cautiously.

“We now find ourselves operating in a new paradigm of trepidation – uncertain as to what the future may hold for the entire medical profession,” said the South African Society of Anesthesiologists in a statement.

In a joint statement, the South African Society of Obstetricians and Gynaecologists and the Gynaecology Management Group said attacks on medical professionals are concerning “because doctors are unable to practice their profession of healing when they are in constant fear of their lives”.

“We don’t want to have professionals now selecting, ‘This patient is going to die, I am not going to take a risk of trying to save a life because by saving a life I am threatening my own life.’ We don’t want to practice under those circumstances.”

Outside Munshi’s house, the 40-year-old doctor questioned whether his job was worth his life: “Ultimately, you have to step back and ask yourself, what are we doing this for?

“It’s scary to understand there is this kind of retaliation that can occur from a poor outcome.

“We as the medical community will now fear retaliation.”

The doctors outside Munshi’s home largely dismissed the allegations against him regarding Zayyaan’s death. They described the doctor as gentle, learned and hardworking.

“It’s just sad that when the shit hit the fan, we did not stand by him then. We left him to the vultures,” said the 40-year-old doctor. DM