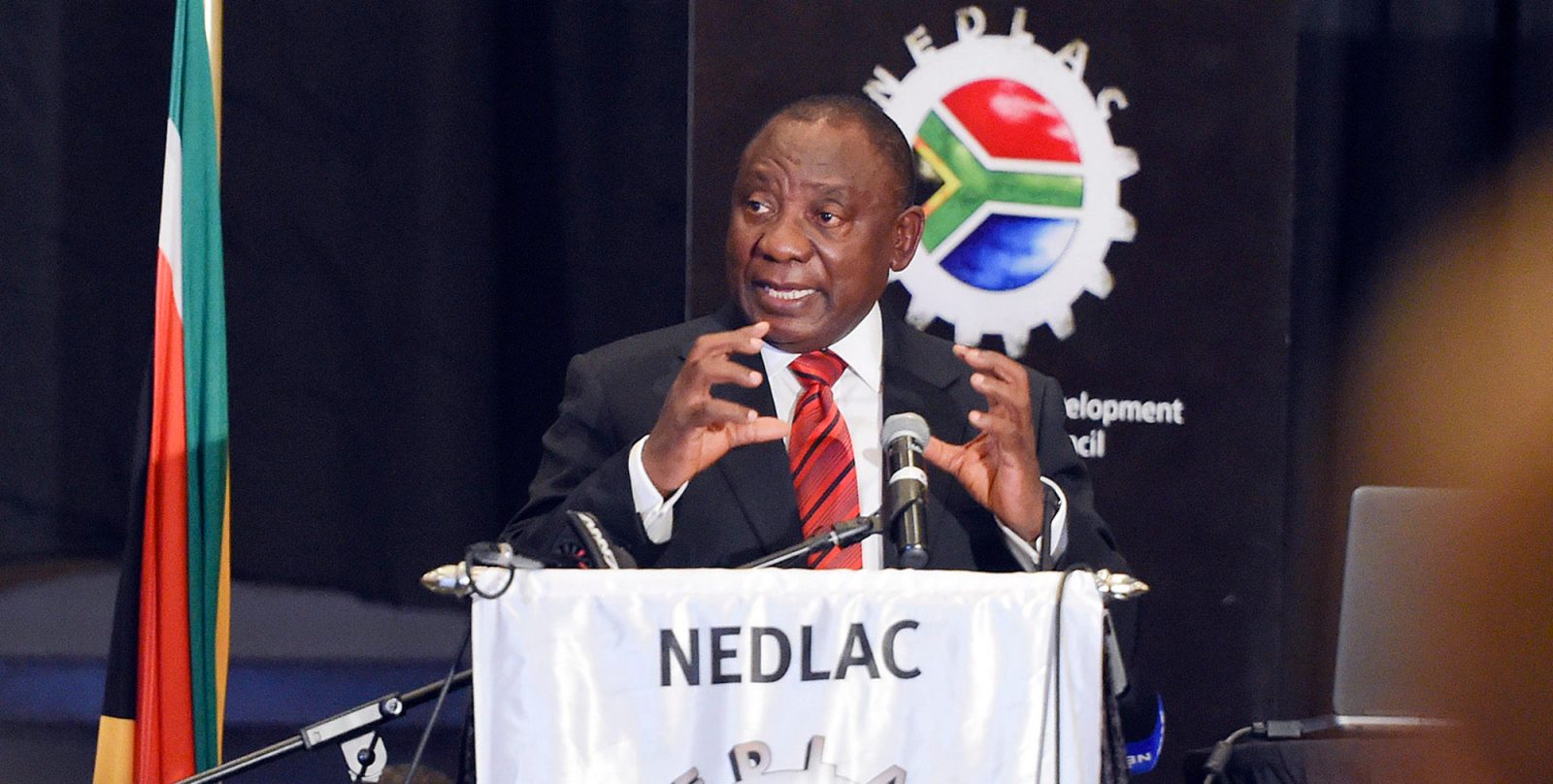 Nedlac is picking up discussions on South Africa’s economic recovery plan again next week. Much talk has happened, and even a presidential proclamation of a done deal. But talk is cheap and the devil is in the detail.

A broad-sweep agreement between the government, labour and business exists on the must-dos to try to haul South Africa out of the Covid-19 hard lockdown and recession slump.

“Action must be underpinned by the need for enhanced job and social protection, food security and building a capable state,” says a draft version of the Economic Recovery Action Plan at the National Economic Development and Labour Council (Nedlac).

It’s a bit of give and take in what’s not exactly a social compact, but more of an agreement to put respective contributions into the same pot.

And so the government says it’ll relook at regulatory frameworks on, for example, energy, small business and mining. Business has backed mass public employment schemes and is mobilising financing for infrastructure projects. Labour is supporting financing from all potential sources, read also international multilateral organisations such as the World Bank.

To get here has taken weeks. And still, the lack of detail is resounding.

It’s understood such detail remains undecided. An exception is some infrastructure projects, but these should be a given in light of the 24 July 2020 gazetted list of 50 shovel-ready so-called Strategic Integrated Projects, driven by the infrastructure office in the Presidency.

On Tuesday, the Presidency first announced President Cyril Ramaphosa would chair that day’s Nedlac meeting and then later announced a deal had been done.

“The agreement was formalised at a meeting today, Tuesday, 15 September 2020… The social partners’ action plan is founded on significant convergence on what needs to be done to set the economy on a new, accelerated, inclusive and transformative growth trajectory,” said the Presidency statement.

“The president will announce the details of the plan once it has been finalised by Cabinet.”

As has become practice now, the Nedlac meeting was the precursor to the presidential address to the nation. It’s part of the sequence that also includes the National Coronavirus Command Council and the Presidential Coordinating Council (PCC) that brings together premiers, mayors and traditional leaders.

Then it was time for Wednesday’s special Cabinet meeting – the Constitution recognises only the Cabinet as the executive decision-maker, not some command council – followed by the address to the nation.

Ramaphosa announced the curfew would stay put in what is a win for the securocrats – curfews require movement permits, which allow control and information collection — as the size of gatherings was increased depending on whether indoors or outdoors, and South Africa’s borders were finally opened.

“Now is the time to return our country, its people and our economy to a situation that is more normal, that more resembles the lives that we were living six months ago… (I)t is now time to remove as many of the remaining restrictions on economic and social activity as it is reasonably safe to do,” said Ramaphosa.

Segue into the Nedlac joint (not) plan.

“… (T)he social partners at Nedlac have made tremendous progress on an ambitious social compact for economic recovery. This represents a historic milestone for our country, demonstrating what can be achieved when we unite to confront an urgent crisis,” said Ramaphosa.

“Cabinet will build on this emerging common ground to finalise the country’s economic reconstruction and recovery plan in the coming weeks.”

At the end of the day, it’ll be the Cabinet implementing its own plans. That has been the worry in some circles – and it would explain reluctance by the government to make firm action, financial and deadline commitments at Nedlac.

But the state frequently struggles to move beyond pretty words and optics.

Nothing illustrates that better, perhaps, than the more than two-year saga to release spectrum for better broadband accessibility.

Ramaphosa talked about this in his first State of the Nation Address (SONA) on 16 February 2018.

“We will finalise our engagements with the telecommunications industry and other stakeholders to ensure that the allocation of spectrum reduces barriers to entry, promotes competition and reduces the cost to consumers.”

A year later, in the 7 February 2019 SONA, the spectrum matter was still going on.

“The Minister of Communications will shortly be issuing policy direction to Icasa (Independent Communications Authority of South Africa) for the licensing of the high demand radio frequency spectrum.

After the May 2019 elections, spectrum remained a SONA talking point. “(W)ithin the next month, the Minister of Communications will issue the policy direction to ICASA to commence the spectrum licensing process,” said Ramaphosa on 20 June 2019.

In the SONA of 13 February 2020, Ramaphosa still talked of making progress while again touting the digital economy.

“The regulator, the Independent Communications Authority of South Africa, has undertaken to conclude the licensing of high demand spectrum for industry via auction before the end of 2020.”

While this illustrates the point, other issues do as well – and have done since the start of the Nedlac talks in late August 2020.

For example, the approval of self-generation projects up to one gigawatt for which 75 of 132 applications had been approved, according to Mineral and Energy Minister Gwede Mantashe during a briefing in February 2020.

Others in the Global South seem perplexed why data remains so comparatively expensive in South Africa, and why rolling power outages have not triggered investment. Certainly, those questions were asked in the fourth Fiscal Futures webinar hosted earlier in September by Economic Research Southern Africa (Ersa).

The Nedlac discussions agreed on SOE reform to ensure effective running of those entities. But, again, that’s something that goes back, if not to the 2012 Presidential SOE Review Commission, then the July 2017 14-Point Inclusive Growth Action Plan by then finance minister Malusi Gigaba. The SOE Shareholder Bill for better governance, or any such legislation, was to have been finalised by March 2018, but has yet to see the light of day in Parliament.

Back to the Nedlac economic recovery plan discussions.

These talks will continue next week, hopefully with the result that there will be quick wins – specific projects that are properly costed, with definite outcomes within set time frames.

Two weeks for further Nedlac discussions has been mooted. That takes the process into October and a clearer picture of financing would have emerged as the government’s Budget processes are wrapping up for the Medium-Term Budget Policy Statement (MTBPS) pencilled in for 21 October.

It remains to be seen exactly when an announcement is made on the Economic Recovery Plan, which Ramaphosa on Wednesday evening also referred to as the “reconstruction and recovery plan”, in an echo of the governing ANC blueprint endorsed in June 2020.

While Ramaphosa’s latest address to the nation on 17 September was all about the rebooting the economy, wracked by the Covid-19 hard lockdown with a GDP contraction of 8.2%, another reason emerged for Level 1 Lockdown.

“Where required for the purposes of voter registration or special voting, the Independent Electoral Commission will be allowed to visit correctional centres, health facilities, old age homes and other similar institutions.”

The Electoral Commission of South Africa (IEC) on Thursday confirmed by-elections would be held countrywide in early November.

Daily Maverick understands the scheduled date for some 96 by-elections is 11 November. Every province is set for by-elections, not only because of a councillor’s resignation or death, but also the dissolution of councils such as Renosterburg and Phokwane in the Northern Cape.

After a six-month lockdown that effectively stifled political activity on the ground, parties must be champing at the bit to electioneer and campaign.

Much is at stake, and perhaps even more so than on the political economy front. The run-up to the by-elections will be a crucial testing ground before the municipal poll in 2021. DM