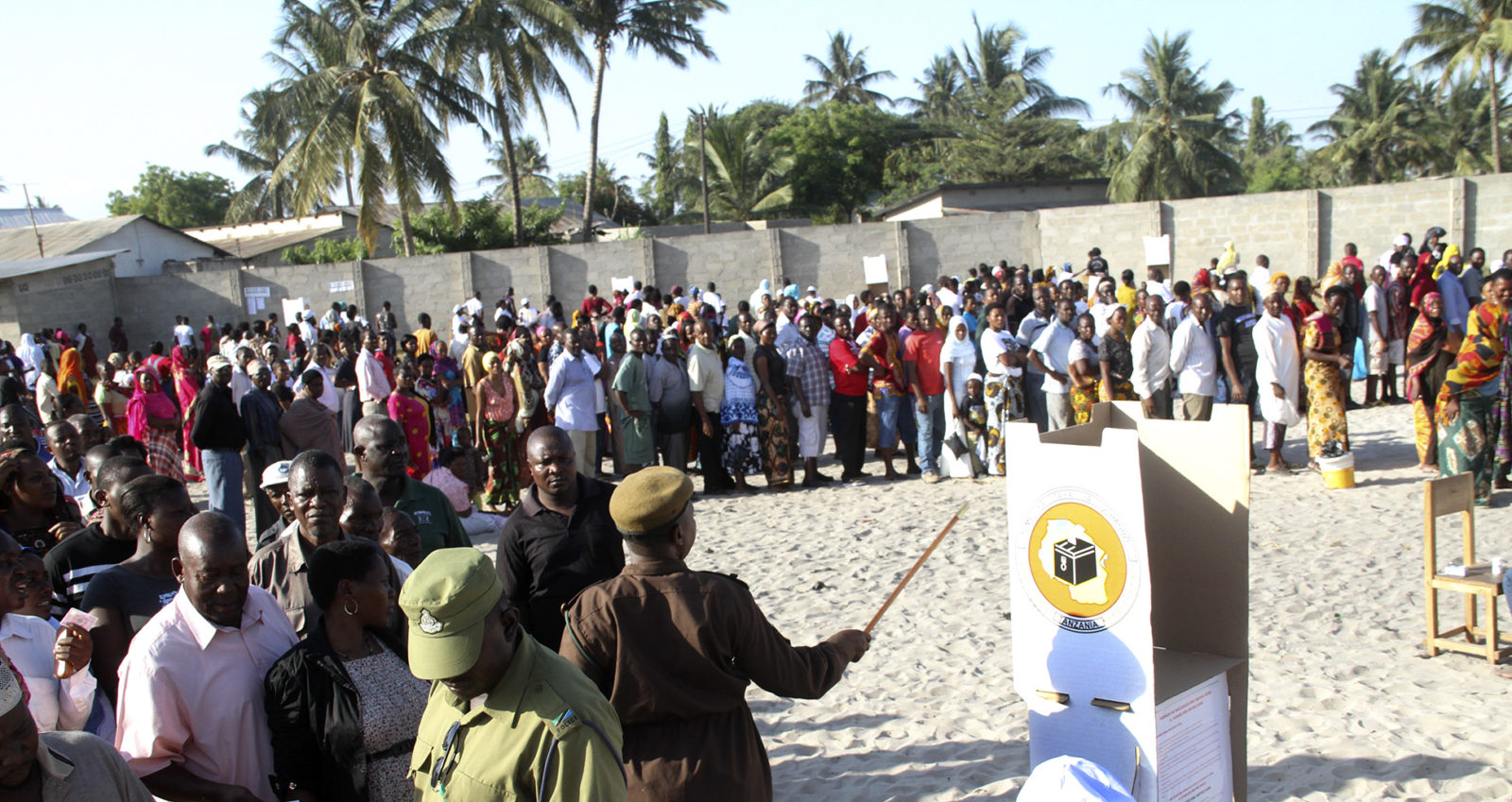 Voters queue to cast their vote in the Tanazania's presidential election at a polling station in the capital Dar es Salaam, Tanzania, 25 October 2015.(Photo: EPA/ANTHONY SIAME)

Tanzania goes to the polls on 28 October 2020 to elect a president, members of parliament and councillors. This will be the fifth general election since the reintroduction of the multiparty system in the country in 1992.

While President John Magufuli, who took office in 2015, has pledged a peaceful and credible process, the election comes amid concerns of narrowing freedoms and increasing authoritarianism.

Magufuli has been accused of cracking down on political dissent and freedom of speech in a desperate bid to tighten his grip on political power, a situation that has worsened as the election draws closer.

Reports indicate shrinking civic and democratic space, information manipulation and restriction of freedom of expression, association and assembly. Newspapers have been shut down, journalists are being harassed and arrested, the opposition is being persecuted and arrested and the work of non-governmental organisations (NGOs) has been severely restricted.

Protests, anonymous blogging and criticism of parliament have all been outlawed. This has heightened fears that the looming vote’s credibility will be compromised.

In a joint statement submitted by CIVICUS and DefendDefenders at the 43rd session of the United Nations (UN) Human Rights Council in June, the organisations noted the rapidly deteriorating situation in Tanzania, urging the UN to act swiftly and prevent further escalation. Part of the statement read:

“We continue to document the use of draconian legislation and of legal and extra-judicial methods to restrict freedom of expression and opinion, peaceful assembly and association, and the overall closure of the civic and democratic space.”

Equal access to the media, and a conducive operating space for all stakeholders, is an important part of a vibrant and inclusive democracy. However, the current environment will make it difficult for citizens to make informed choices come election day.

In the absence of a conducive operating environment for political parties, candidates, civil society and the media, the people of Tanzania risk having their right to freely participate in the elections compromised.

Manipulation of the legal framework

Freedom House’s annual report documents how, in January 2019, parliament passed draconian amendments to the Political Parties Act that, among other provisions, allow for bans on political parties that engage in common forms of activism. A campaign of repression against opposition parties ensued, with harassment, arrests, and detentions of prominent political figures.

According to a report released by Human Rights Watch (HRW) on 2 September 2020, at least 17 opposition party members and critics of the government have been arrested since mid-June. The human rights watchdog argued it was no coincidence that the Tanzanian government had increased its repression so close to next month’s elections.

On 23 June, police arrested opposition politician Zitto Kabwe and seven other opposition members during an internal meeting of their opposition party, Alliance for Change and Transparency (ACT)-Wazalendo, in Kilwa, in the southern region of Lindi. They were charged with “endangering the peace”.

On 6 July, eight members of Chadema, Tanzania’s main opposition party, including its youth wing chairperson, Nusrat Hanje, were arrested in the Singida region, west of Dodoma.

The police accused them of insulting the national flag by singing the Tanzanian national anthem while raising a Chadema flag during a party meeting on 4 July. Prosecutors also accused the group of unlawful assembly and “attempting to communicate classified information”. The group remains in jail in Dodoma after a magistrate denied them bail. On 26 August, the high court ordered that their bail be processed, but they remain in jail.

On 11 July, the police arrested Sheikh Issa Ponda, secretary of the Council of Imams in Tanzania at his office in Bungoni, Dar es Salaam, allegedly for circulating a document containing elements of incitement and breach of peace.

Recently, the National Electoral Commission (NEC) reportedly reviewed and amended election regulations. The new regulations indicate that inviting international observers is discretionary. In addition, party agents will not be guaranteed to receive result slips after the count has been concluded. It will be left to the discretion of the relevant election supervisor whether to allow a party agent to look at the result slips.

As a result, critics believe the October elections will neither be free nor fair unless urgent reforms are introduced. Fatma Karume, a former president of the Tanganyika Law Society, said:

“The conditions definitely do not exist for a credible election. The premise of free and fair elections is that there must be a level playing field for all political parties, which is currently not the case in Tanzania.”

An independent, impartial media that affords equal access to all political parties and candidates is necessary for a free and fair election.

A month before the election, the state media continues to show bias towards the ruling Chama Cha Mapinduzi (CCM) party.

Maalim Seif Sharif Hamad, the national chairperson of the opposition ACT in Tanzania, has bemoaned failure by public media outlets to provide equitable coverage of all political parties:

“Currently, the TBC, ZBC, Daily News, Habari Leo (News Today and Zanzibar Leo (Zanzibar Today) have become mouthpieces of the CCM, driving government propaganda. The media plays a vital role in ensuring free and fair elections. They should draw up regulations and guidelines to ensure equitable and fair coverage,” he said.

The government has reportedly imposed new restrictions on the media and on freedom of expression online. It adopted regulations that ban Tanzanian broadcasters from working with foreign broadcasters without staff from the Tanzania Communications and Regulatory Authority (TCRA) or other government agency present. It also adopted regulations that criminalise a broad range of social media and online posts, including those that support organising demonstrations.

The authorities have also fined or suspended media outlets for covering politically sensitive topics, including the coronavirus. On 28 August, the TCRA suspended the private media house, Clouds TV, for a week for violating the broadcast code by announcing election statistics that had not been approved by the NEC.

On 6 July, the Communications Authority banned Kwanza TV, an online television station, for eleven months following an Instagram post reporting on a Covid-19 health alert by the United States embassy about Tanzania. The authorities accused Kwanza TV of being “unpatriotic”.

This may result in disenfranchisement of citizens who rely on these sources of information. In line with regional and international best practice, voter education must be open and accessible to all. It should not be criminalised unless it involves dissemination of inaccurate information with malicious intent.

Owing to the Covid-19 pandemic, the elections will be held in the absence of international observers – including the Southern African Development Community (SADC) and the African Union (AU) – as in the case of Guinea and Malawi, among others.

Another major concern will be reduced local election observation.

The authorities have also taken action against key NGOs to limit their ability to monitor the elections.

In July, the NEC issued lists of organisations approved to observe the elections, excluding major organisations that have historically coordinated election monitoring in the country, including the Tanzania Human Rights Defenders Coalition, the Legal and Human Rights Centre, and the Tanzania Constitution Forum (Jukwaa la Katiba Tanzania).

According to Human Rights Watch, the organisations believe they were excluded because they have a high capacity to objectively monitor the elections processes.

The Covid-19 pandemic poses an additional challenge to electoral processes in Africa and raises concerns for the holding of free, fair, transparent and peaceful elections, while also ensuring the safety of citizens. Tanzania will go into the elections amid the Covid-19 pandemic, although in June, President Magufuli declared that the country was Covid-19 free.

Tanzania has been criticised for its management of the pandemic, including for not restricting large gatherings and not sharing information on coronavirus figures.

Decisions on elections in times of crisis can therefore pose a dilemma between civic responsibility and health protection, when people want or are encouraged to vote but are also concerned about their health, and when no appropriate measures are put in place in a timely manner.

Going ahead with the elections in the absence of Covid-19 protection measures may increase the spread of the pandemic and put the health of the population at risk.

Furthermore, the electorate may be reluctant to vote for fear of the virus, which could lead to a low voter turnout, and in the end may further challenge the credibility of the poll.

It remains to be seen whether authorities will be capable of ensuring a Covid-19 compliant election, which promotes physical distancing and respects international public health regulations. However, without building consensus with the political opposition on this issue, a disputed process and outcome is inevitable.

The SADC Principles and Guidelines Governing Democratic Elections emphasise the need for full citizen participation in the political process; freedom of association; equal opportunity to exercise the right to vote and be voted for; and voter education as some of the key principles for conducting democratic elections.

Article 25 of the International Covenant on Civil and Political Rights also refers to the right of every citizen to take part in the conduct of public affairs and to the right to vote in elections: “guaranteeing the free expression of the will of the electors.”

Based on this, it is clear that genuine democratic elections require an environment conducive to the respect of human rights and fundamental freedoms, including freedom of peaceful assembly and association, freedom of opinion and expression and personal security and safety – all of which are essential conditions for the effective exercise of the right to vote.

The playing field in Tanzania is far from being level, and this is in violation of SADC guidelines and the African Charter on Democracy, Elections and Governance.

For these reasons, the African Union, SADC and the African Commission on Human and People’s Rights should all be expressing concern and appealing to President Magufuli to abide by international and regional law.

Elections should not be held just to tick the box of fulfilling a constitutional necessity, but should be conducted in a manner that allows for full expression, freedom from intimidation and fear, and equal access to sources of information.

Authorities in Tanzania are encouraged to put urgent measures in place that will guarantee a peaceful, free, fair and credible process. DM/MC

The Southern Africa Human Rights Roundup is a weekly column aimed at highlighting important human rights news in Southern Africa. It integrates efforts of human rights defenders and facilitates evidence-based engagement with key stakeholders, and institutions on the human rights situation across the region.

The weekly roundup is a collaboration between the Southern Africa Human Rights Defenders Network (SAHRDN) and Maverick Citizen.