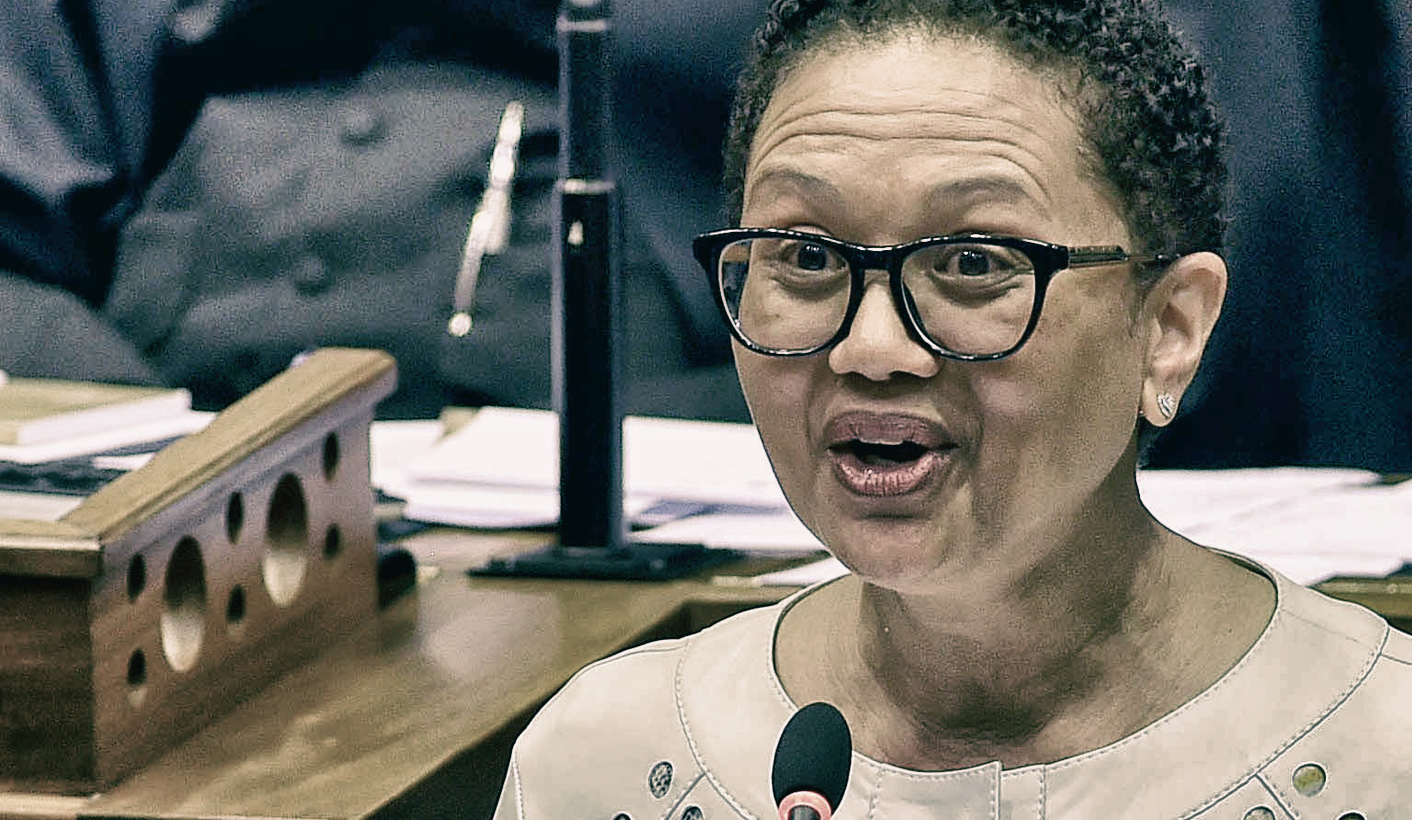 An unlawful 2015 attempt by former Minister of Energy Tina Joemat-Pettersson, corrupt officials and board members of the Strategic Fuel Fund to sell off the country’s strategic oil reserves, which was halted in 2016, will now cost taxpayers hundreds of millions of rands as oil traders sue the state for costs and compensation.

Judge Owen Rogers, hearing a civil matter in the Western Cape High Court, was informed on Tuesday that the Strategic Fuel Fund (SFF), had reached an agreement for a draft out-of-court settlement with Glencore, one of eight companies who sought to benefit from the deal.

Rogers will now be left to calculate what South African taxpayers will have to fork out and what would amount to “just and equitable relief”.

The shameful saga of the brazen theft and sale of South Africa’s strategic oil reserves between 2015 and 2016 is contained in thousands of pages of documents before the court. The matter has been set down for the week of 14 to 18 September 2020.

Some of the country’s best and most expensive legal minds have spent days focussing on how to deal with the unlawful and corruption-ridden sale of 10.3 million barrels of the country’s strategic oil reserves for R5-billion between 2015 and 2016.

The oil was sold for $28 a barrel while the market rate at the time was around $38. The SFF sold the oil under the “pretext” that it was a stock rotation.

When the deal was scuppered in 2016, the SFF moved the payments by the oil traders to a trust account while holding onto the oil stocks at the SFF storage tanks in Saldanha Bay.

The traders were, however, lumped with storage fees amounting to millions of rands.

The Central Energy Fund, which oversees the SFF, has sought in these civil proceedings to have the rotten deal, entered into by then former SFF fund acting CEO, Sibusiso Gamede, with the knowledge of Joemat-Pettersson, declared unlawful and set aside.

On Wednesday Judge Rogers heard that the SFF had agreed to draft out-of-court settlements which still have to be made an order of the court.

The Sunday Times has reported that the settlements would amount to around R400-million, to compensate for hedging losses, interest, storage and various other costs to oil companies as a result of the botched deal.

The SFF sold off  the oil to eight companies:

The CEF has argued that an equitable remedy would be to set aside the illegal contracts and for the court to determine what the various losses incurred by the oil companies amounted to – and no more than that.

The court heard on Wednesday that Joemat-Pettersson’s conduct with regard to the debacle had been “reckless and delinquent”.

Advocate Wim Trengove, acting for Vesquin Trading and Vitol, said Joemat-Pettersson had failed to supervise SFF CEO Sibusiso Gamede, who was identified in a forensic report as receiving R1.5-million in bribes.

Gamede was negotiating the sale of the crude oil for $280-million (around R5 billion) when payments were made to his account.

Said Trengove: “We don’t know whether the minister was a victim of Mr Gamede or complicit. She has not come clean.”

Joemat-Pettersson had told the court that she had “nothing” to disclose with regard to the rule 53 record (or a record of decision). As a result, said Trengove, the State should be accountable for the losses.

Trengove said that the Constitutional Court had confirmed that a minister representing the State, as the sole shareholder of a state-owned company, “is charged with a high-level supervision of the company to ensure that it discharges its statutory mandate and operates in the national interest”.

The minister had the power to supervise high-level public office-bearers in the performance of their official duties and did so also by means of the corporate relationship that Joemat-Pettersson had with the board members, said Trengove.

The CEF’s papers to the court, he added, had demonstrated that Joemat-Pettersson, the CEF and the SFF “were all delinquent in the discharge of their oversight functions”.

Advocate Kameshni Pillay, representing Organization Undoing Tax Abuse (OUTA) as amicus curiae, this week said that the SFF and the oil traders were all culpable with regard to improper and corrupt conduct.

“What one sees in the present matter, are transactions riddled with impropriety which culminate in massive claims for compensation from the state.

“Unfortunately such claims, if successful, will be borne by taxpayers and not the real culprits – state functionaries but also private sector players chasing financial gain,” said Pillay.

Despite the fact that the merits of the sought review had been settled, OUTA wished to highlight that the “conduct of functionaries within the SFF as well as the erstwhile Minister of Energy raise serious cause for concern.”

These functionaries conducted themselves, said OUTA, with “scant regard for applicable procurement prescripts even though what they were dealing with was one of South Africa’s most precious national assets”.

The conduct of the Minister of Energy, the board of SFF, executives of SFF “and last but definitely not least, the shameful and shocking conduct of its CEO at the time, Mr Gamede” was “highly questionable”.

The court needed to decide, said Pillay, whether it was just and equitable to grant “additional costs or compensation” made by some of the oil companies.

Advocate Terry Motau, appearing for the SFF, said the companies who did business with the former SFF CEO and board “could not plead ignorance in how the transaction had transpired” and this should be considered in the calculation of the settlement.

While some of the oil companies had done so with regard to impropriety on behalf of the SFF, their conduct could not escape scrutiny.

Motau further argued that from the start, some of the oil companies, particularly Vitol, which dealt with the SFF and Gamede, had been aware that the process did not need to comply with an open tender, was not a procurement and was in fact a sale.

Emails between Vitol and the SFF prove, said Motau, that there had been an attempt to fix specifications in such a manner that Vitol would benefit to the detriment of other bidders.

This conduct, he added, could not be overlooked in considering a “just and equitable settlement” or compensation.

It was only in retrospect, said Motau, that Vitol had provided a legal defence for the behaviour of its employees. Both Gamede and Vitol had been aware, he argued, that the sale should have been conducted through an open tender.

The SFF, he said, was an entity that executed a national mandate to preserve strategic reserves.

“Factually there was never a need for the sale,” said Motau.

He asked the court to “send a message” about the “unconscionable conduct on the part of state officials”.

He also asked for the court to give a directive that “all officials implicated in these transactions should be acted against”.

Rogers said that in this instance there was a minister and a board “who just did not care” and that it would be “far more compelling” if those in top positions knew that there were occasions when the state would be held liable for the individuals it appointed.

“The state is being made to pay for the egregious incompetency of the people it appointed. Mr Gamede still walks the streets. The authorities, including the NPA, have so much on their plate that the chances they will get to this, if they do, is anyone’s guess,” quipped Judge Rogers.

The first duty, said Motau, was to the “fiscus and the unsuspecting taxpayer”.

The SFF was not in the business of selling oil, said Motoau, to which the judge replied that in setting up a “trading division” it appeared that it intended to trade in oil sales. To which Motau responded that the division only existed “on paper”.

He said the quality of the oil had never been compromised, as Gamede had alleged, which meant that the question of the urgency of the sale “found no justification”.

NB This story has been corrected to reflect that at this stage Glencore has reached the agreement with the SFF for a draft out of court settlement.