Here it comes: a pressure cooker of legislative priorit... 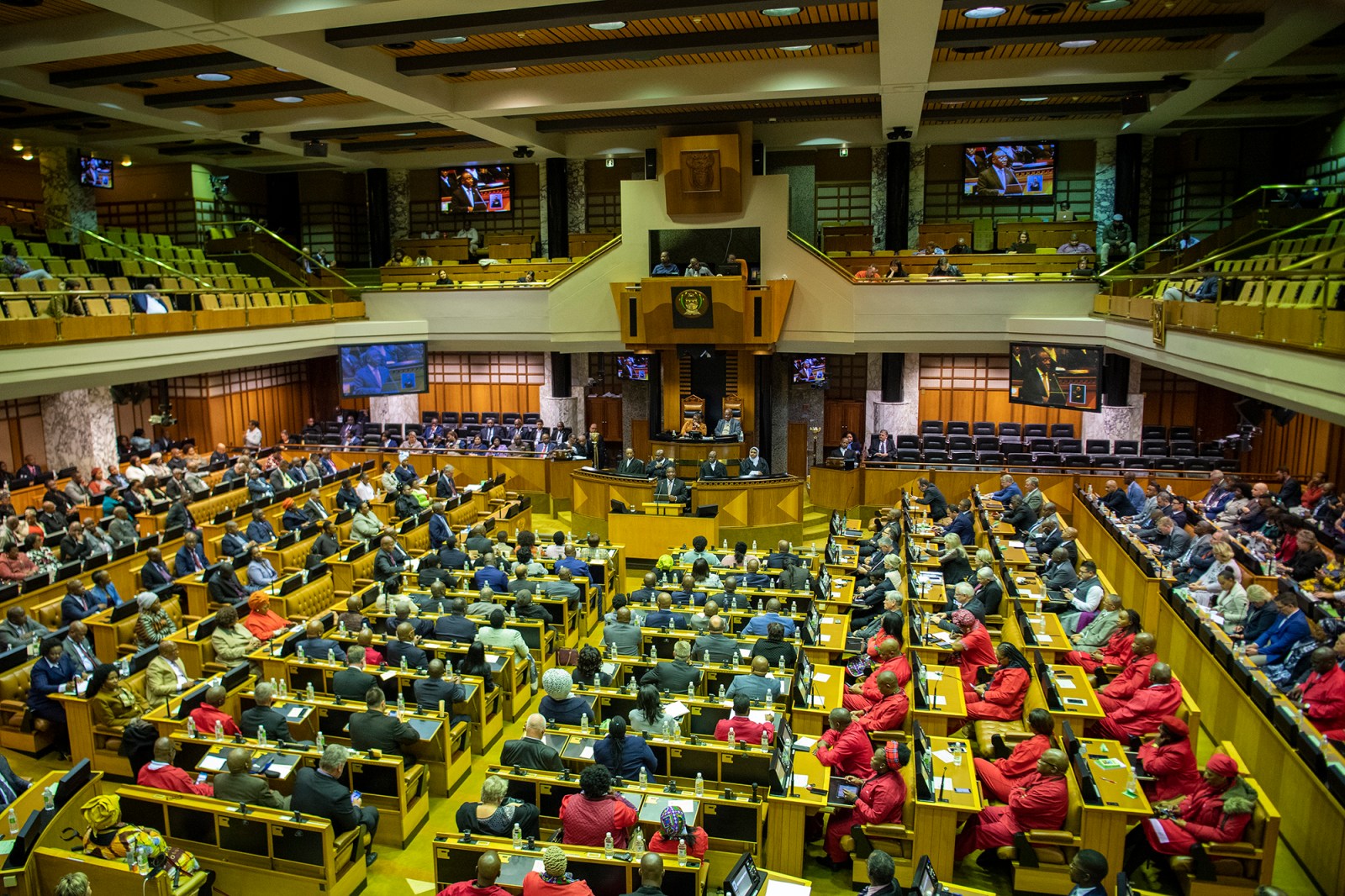 The National Assembly of Parliament in Cape Town.

Public comment on three bills to tighten provisions against gender-based violence ends on 9 October, a few days after Parliament returns from recess. Dubbed the GBV Bills, they’re part of key draft laws requiring attention, including the NHI Bill and the constitutional amendment for expropriation without compensation.

In the final eight weeks or so of this year’s parliamentary calendar, at least three legislative initiatives fundamental to the governing ANC’s political and election promises run up against time. It’s unlikely any of these three priority areas are going to be wrapped up in 2020.

Given President Cyril Ramaphosa’s description of gender-based violence as the “second pandemic” – Covid-19 being the other – the three amendment draft laws to tighten provisions have been in the spotlight well before finally making it to Parliament in late August, or 11 months after being first mooted at the presidential summit on ending gender-based violence in September 2019.

The National Health Insurance (NHI), a cornerstone of tripartite alliance agreements for more than a decade now, had completed most countrywide public hearings before the hiatus triggered by the Covid-19 lockdown meant it returned to the parliamentary health committee only just before September recess. Public hearings at Parliament now are proposed from October to the first week of December; between seven and nine presentations from Tuesday to Friday.

The ad hoc committee on amending Section 25 of the Constitution to expressly allow for land expropriation without compensation – in line with the ANC’s 2017 Nasrec resolution, and the EFF push – is meeting this week to set a programme. It was re-established in late June and due to end on 31 December, but more likely will have to complete its work and report back to the House by the end of November as that’s when the start of the year-end recess is pencilled in.

Must-dos in the closing two months also include October’s Medium-Term Budget Policy Statement (MTBPS), annual report briefings by departments and entities – usually the statutory tabling deadline is September, but two extra months have been accorded – and the usual parliamentary Budget oversight through the Budget review and recommendation reports, or BRRRs.

For now, the current parliamentary recess is being put to good use – as the written comment period on the set of three gender-based violence amendment draft laws, dubbed the GBV Bills, ends on 9 October.

MPs would have returned a couple of days earlier, with the justice committee members facing a packed in-box, including the Cannabis Bill to regulate the private use of dagga.

The Domestic Violence Amendment Bill, among others, would make possible online applications for protection orders, but also defines coercive and controlling behaviour and economic abuse as a cause for official action in an effort to overcome attitudes that only physical action like assault constitutes harm.

Controversially, this draft law also proposes the criminalisation of not reporting the sexual abuse of a child or mentally disabled person to the police, if there is a reasonable belief such abuse is taking place. A five-year jail term, and/or a fine, is the penalty on a guilty verdict.

The year 2020 is a parliamentary pressure cooker, not eased by the ANC parliamentary caucus’s rejection of a DA proposal for an ad hoc committee to scrutinise the Covid-19 personal protective equipment tender scandal.

The Criminal Matters Amendment Bill proposes a series of amendments to allow giving evidence through intermediaries and technology, in courts, alongside stricter criteria to make bail and banning the possibility of police bail, effectively the release of a suspect by the SAPS before the first court appearance.

It’s taken the better part of a year for these three amendment draft laws to arrive in Parliament from the first time such legislative intervention was mooted at the September 2019 gender-based violence summit. The bills arrived at Cabinet in July 2020, were agreed to and finally tabled in Parliament in August. The legislative changes are part of a so-called GBV emergency plan.

This 11-month timeline is one of the faster legislative processes, from executive drafting to tabling in the national legislatures. At Parliament, on average it takes some two years for a draft law to be adopted in both the National Assembly and National Council of Provinces.

But sometimes that adoption in both Houses is not good enough.

Several bills have been found wanting by the Constitutional Court. Amending the 1998 Electoral Act to allow for independent candidates is pressing as a June 2022 deadline looms, while Home Affairs is still looking at this, with no draft law anywhere near Parliament.

And, instead of signing them into law, at least four bills have been returned by Ramaphosa to Parliament for various reasons, according to parliamentary documentation.

Parliament’s trade and industry committee in August was briefed on the Copyright Amendment Bill and the Performers’ Protection Amendment Bill. The Liquor Products Amendment Bill has been referred to the agriculture committee. And, after years, the Secrecy Bill, officially the Protection of State Information Bill, is back before the justice committee.

On average over the past few years, Parliament has passed 11 laws a year. Just before the September 2020 recess, a total of 25 draft laws were before various committees.

The year 2020 is a parliamentary pressure cooker, not eased by the ANC parliamentary caucus’s rejection of a DA proposal for an ad hoc committee to scrutinise the Covid-19 personal protective equipment tender scandal.

“We will not support the call for any ad hoc committee when the committees of Parliament have the mandate and authority to do the work,” said ANC Chief Whip Pemmy Majodina in a statement on 9 September.

“Caucus, through the Office of the Chief Whip, has decided to convene follow-up meetings with the executive to assess progress on the management of Covid-19 resources. ANC study groups will convene and prepare for the calling of both portfolio and select committees to take up the issues raised in the [Auditor-General’s] report.”

Yes, parliamentary committees must do their oversight. For example, labour should interrogate the systemic issues at the Unemployment Insurance Fund that led to the Covid-19 Temporary Employer/Employee Relief Scheme debacle of non-payment to workers, while the social services committee should examine the R350 temporary relief grant missteps, and trade and industry the personal protective equipment tender failures.

But a focus as seen in the parliamentary inquiries on the SABC in 2016 and Eskom State Capture from 2017, even if it takes the form of an ad hoc committee, could and would sharpen Parliament’s oversight tools.

But that would require political will, and from ANC MPs a determination to ask uncomfortable and difficult questions in the rush to the end of the parliamentary year. DM