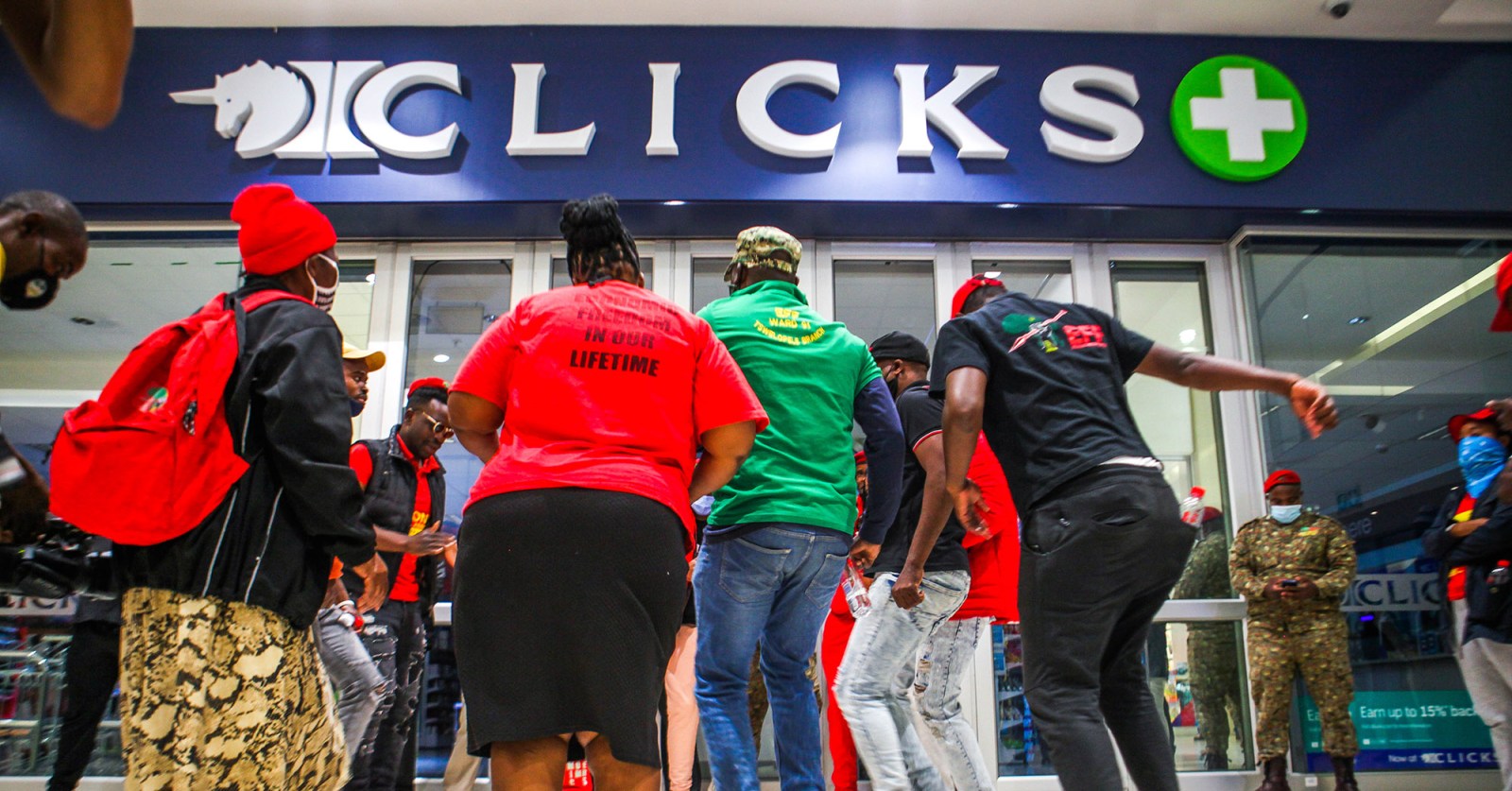 Members of the Economic Freedom Fighters at Sandton City Mall during the national shutdown of all Clicks outlets on 7 September 2020. (Photo: Gallo Images / Sharon Seretlo)

Thuggery and violent protests at Clicks stores nationwide distract from the real issue: Why do brands keep making ads that are racially offensive?

The Clicks pharmacy group was forced to close its 880-store franchise on Monday after 37 stores were vandalised, looted and in some cases petrol-bombed.

This was after the EFF protested outside the stores following the publication of an offensive and racist ad for a hair care product made by Unilever brand TRESemmé on the Clicks website last Friday.

The ad depicted the hair of a black woman as being “dry, damaged, frizzy and dull”, and put it against that of a white woman with hair described as “colour treated, fine, flat or normal”. The ad campaign was apparently meant to celebrate all hair types, but the discrimination was implicit: “Black women, use this shampoo and you can have hair like this white woman.”

The outrage was immediate. Marketers never seem to learn.

Clicks, Unilever and TRESemmé took the ad down on the same day and published an apology, with Clicks taking to social media to apologise to customers.

The EFF jumped into the fray and published a statement saying that its “progressive forces” would ensure that Clicks would be held accountable for its actions.

EFF Secretary-General Marshall Dlamini wrote to Clicks, demanding that it publish the names of all of the people involved in commissioning, producing and publishing the ad, whether they were internal staff or employees and directors of third parties.

If Clicks did not comply “in writing” within 24 hours, the EFF would close all stores “without further notice”.

The EFF followed this up with a warlike Twitter campaign: 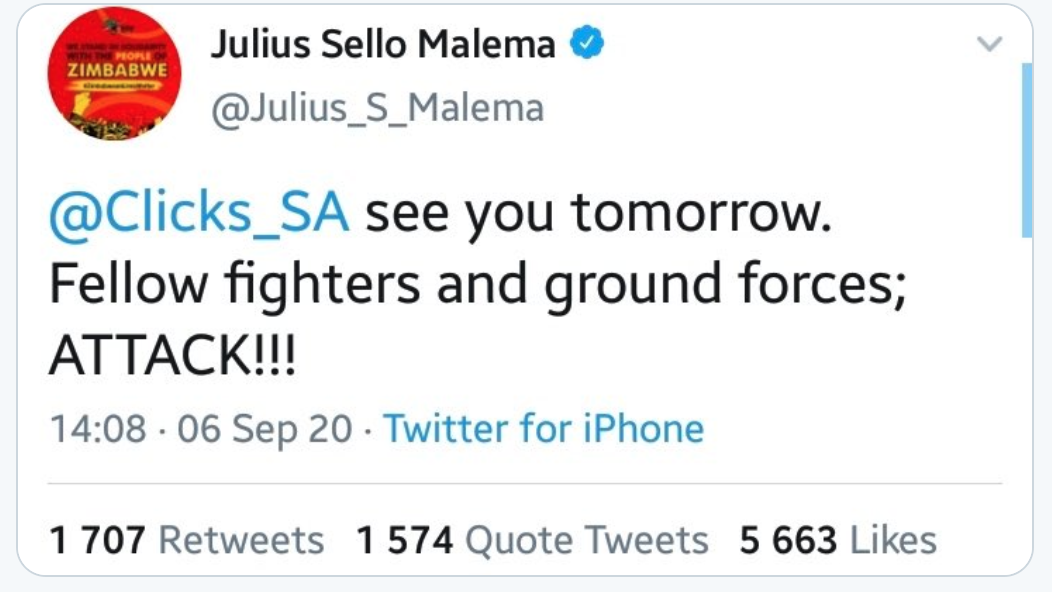 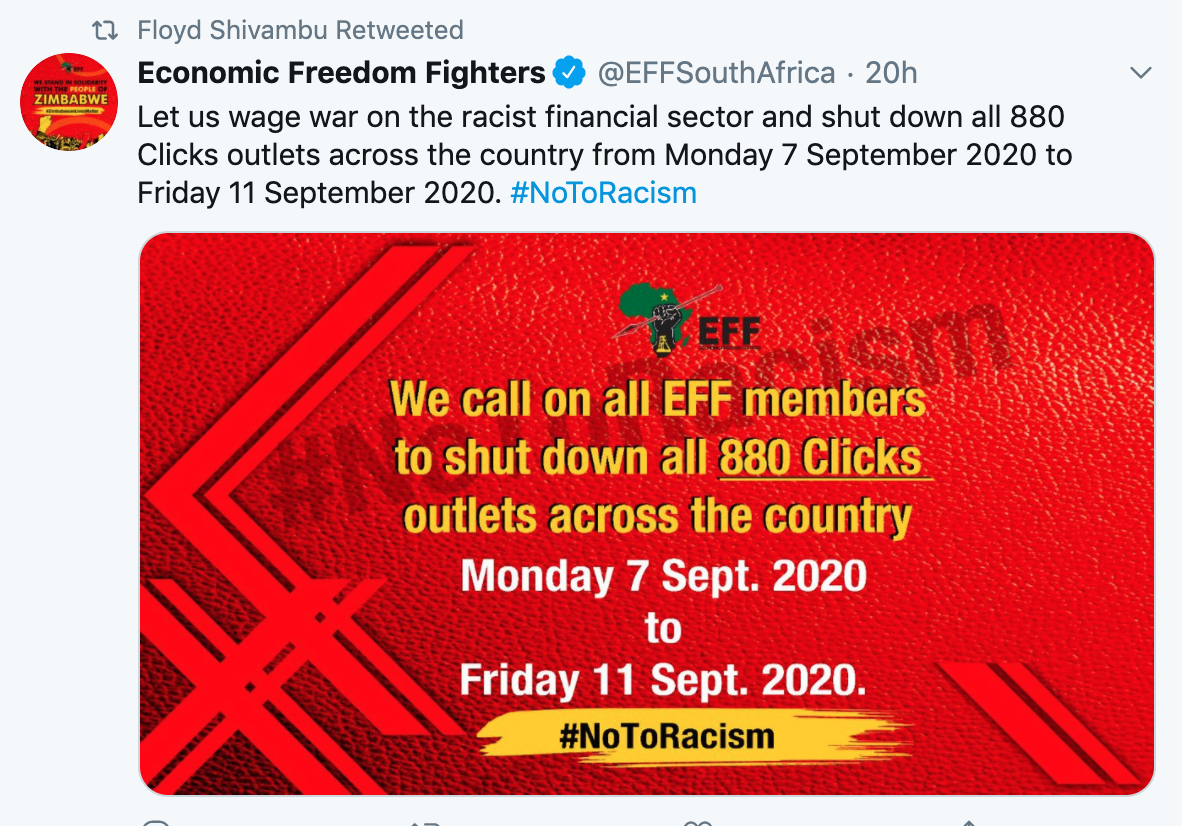 Clicks replied to the EFF via its legal team at Werksmans, stating that privacy laws meant it could not release the names of the people involved (and for their own safety), but pointing out that Clicks acknowledged the ad was offensive and that the CEO Vikesh Ramsunder had apologised unreservedly. The open letter was later published, and Clicks invited the EFF to further discussions.

Werksmans then instructed the EFF to cancel the threatened shutdown of the stores and remove all content from social media which it said inflamed and incited violence against Clicks, its properties and staff.

The outcome, noted in the letter below, was probably predictable.

Clicks also dug its heels in, and opened up on Monday morning. Dozens of stores were trashed by EFF supporters, an eNCA journalist was harassed and Clicks staff were told to go home for their own safety.

Clicks sought urgent relief from the courts, seeking an interdict to prevent the EFF from protesting outside their stores. This was denied with costs.

That the interdict was denied was surprising, says human rights lawyer Richard Spoor, given what appeared to be a clear incitement to violence. While a right to protest is enshrined in SA law, there is no right to intimidate or threaten.

“Incitement to commit a crime is a statutory offence under the Riotous Assemblies Act. Julius Malema is no stranger to incitement of violence and has previously been found guilty by both the high court and the Supreme Court of Appeal. He has now taken this to the Constitutional Court, and the case has not yet been heard.”

In Spoor’s opinion, Monday’s events could open the EFF up to potentially damaging criminal and civil litigation.

“He and the leadership of the EFF were using words and phrases like ‘attack’, ‘we are going to war’, ‘show no mercy’. The message was very clear, he was directing his ground forces,” Spoor says.

Whether Clicks will defend its civil rights with litigation, remains to be seen. The CEO was not entertaining calls with most media on Monday. However, the DA announced its intention to lay charges against Julius Malema and the EFF for incitement of violence and destruction of property.

The tagline #Clicks trended on Twitter on Monday with 57,000 tweets. However, opinions were divided, with many Twitterati, including Finance Minister Tito Mboweni, taking exception to the EFF’s particular brand of lawlessness.

In many ways, the violence distracts from the real issue: why do big brands, which should be culturally sensitive, produce racist ads again and again?

In 2017 it was the turn of Unilever (again) brand Dove which was forced to apologise after publishing an advert on its Facebook page that showed a black woman turning into a white woman.

And recently Volkswagen and genealogy company Ancestry.com removed and apologised for offensive ads.

In the case of Volkswagen, the ad showed a huge white hand picking up and flicking a black man away from a yellow Volkswagen Golf. The Ancestry ad featured a fictional pre-Civil War romance between a black woman and a white man – forgetting that in the real world these “romances” were not consensual.

These are US and European examples. One would have thought that in South Africa, where race is such an emotive topic, we would know better.