No questions asked as millions flowed to Estina dairy project 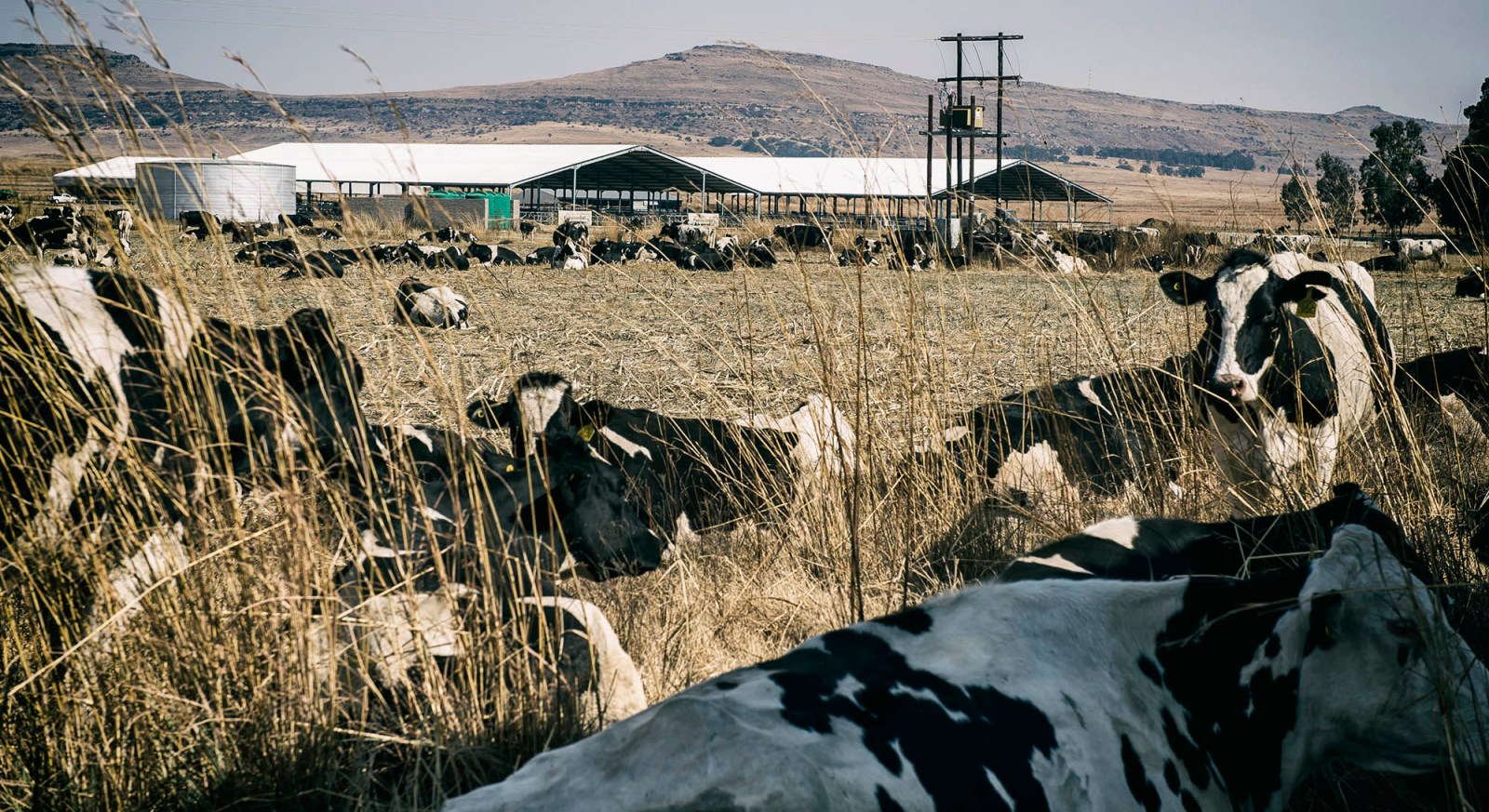 Cattle at the Estina dairy farm project in 2017 in Vrede, Free State. The farm was a joint private-public project between the Free State Department of Agriculture and Gupta-controlled company, Estina. (Photo: Gallo Images / Rapport / Deon Raath)

Political pressure within the Free State provincial government to pay millions toward the disastrous Estina dairy project in Vrede, and a seeming unwillingness to look past the papers placed on her desk, suffused the testimony of the former chief financial officer in the Free State Department of Agriculture who appeared at the Zondo Commission of Inquiry into State Capture on Wednesday.

In hearings that continued till 7pm on Wednesday, the former chief financial officer of the Free State Department of Agriculture, Seipeti Dlamini, was grilled on her role in signing off on payments amounting to R340-million towards the Gupta-linked Vrede dairy farm project.

Dlamini was arrested with seven others in February 2018 for their role in the infamous project.

Explainer: The eight Gupta-linked suspects who appeared in court

Dlamini was transferred to the Free State Department of Agriculture as CFO in December 2010, the commission heard, where Mosebenzi Zwane was appointed as MEC in 2011, the same year Zwane conceptualised the Vrede project.

Led by advocate Leah Gcabashe, Dlamini stated there was no budget for the project in the 2010/2011 financial year ending 31 March and denied knowledge of Zwane speaking to people in Zwelitsha township about the dairy project during that financial period, nor that her head of department, Peter Thabethe, had accompanied him.

The commission has also heard how Thabethe took a highly questionable trip to India on 29 February 2011, to meet with Paras Dairy, as they were the partner he wanted to work with the Gupta’s Estina company on the dairy project. He was accompanied by Ashok Narayan, who was a central player in the Gupta enterprise and exercised control over aspects of Estina’s business and finance.

The Estina/Vrede dairy scandal: A Gupta project from beginning to end

The motivation for the India trip provided in a memo to the Free State premier at the time, Ace Magashule, was that there was R17-million available for feasibility studies into a dairy project. Dlamini said she was not aware of such a memo. Regarding Zwane’s visits to Vrede and evidence he had produced a desktop study on an integrated dairy project, she admitted it was unusual for an MEC to champion a project in such a manner and personally ensure it moved forward.

A project proposal would normally be brought by district services and move upwards for approval rather than the top-down approach from the MEC. She said R9-million was provided for the Vrede dairy project in the 2012/13 budget, but then a delegation from Estina and Paras “came to make a presentation” which “changed the nature of the project to R570-million”. Of this, R342-million was required by the department.

Under interrogation from Gcabashe and Deputy Chief Justice Raymond Zondo, Dlamini admitted that Paras need not have been brought into the project as there were enough locally skilled people to run it.

However, she said the magnitude of the project meant highly qualified people such as those from Paras, which is the largest dairy producer in India, were needed to manage the project, while “mindful our officials could still have done it”.

A Memorandum of Understanding signed between Estina and Paras on 11 April 2012, submitted to Dlamini, called for R342-million from the department over three years, with R30-million required immediately. She said she had to check whether R342-million was available over the medium term, but she approached Thabethe with the fact only R9-million had been budgeted for the project in that 2012/13 financial year.

According to Dlamini, Thabethe said he would reprioritise the budget to enable payment of the R30-million. It was her task to ensure the money for the Vrede project would be available in the budgets for the following two financial years. Dlamini signed off a request for money from the provincial treasury in June 2012, with the R30-million paid on 9 July 2012.

Gcabashe put it to Dlamini that she signed off on the first R30-million paid to Estina without any services being delivered or any proper accounting of how the money was spent. Dlamini said yes, but “deliverables” were attached to the payment, with Thabethe having signed off on the milestones that were to be achieved.

Dlamini said the R30-million would allow for feasibility studies and other requirements such as Environmental Impact Assessments. Zondo commented that it seemed strange to enter into a partnership without at least a feasibility study having been undertaken.

Gcabashe then raised the point that Estina was seen as “a big investor”, but five days before receiving the first payment of R30-million from the Free State Department of Agriculture, they only had R16.98 in their bank account. Gcabashe then produced the quarterly progress report dated September 2012 which noted that of the initial R30-million paid to Estina for the Vrede dairy project, R29-million had been reserved for dairy equipment. Thus the money was not spent on feasibility studies, EIAs or other preparatory services.

“I would not have known about it,” said Dlamini, “this is the first time I’ve seen this report.”

She said district services should have known about it as interrogation of the accounts was their responsibility, with the CFO only becoming involved if they were brought to her attention. Regarding Estina only having R16.98 in their account before being paid R30-million, Dlamini said she was not the manager of the project so “would not have known about those things”.

Zondo replied that as CFO it was surely her responsibility to ask questions about the entity receiving public funds, which led Dlamini to admit that “in hindsight” she accepted that her HoD, Thabathe, had met with “these people” and presumed due diligence had been done.

In the morning, before Dlamini taking the stand, the State Capture inquiry dealt with Bosasa’s alleged payments to former Environmental Affairs Minister Nomvula Mokonyane, with Gina Pieters, the former personal assistant to Bosasa COO Angelo Agrizzi, on the stand.

Pieters’ appearance was brief and largely confined to testimony on expensive hampers provided to Mokonyane’s personal assistant Sandra Thomas. Advocate Viwe Notshe focused on the instruction given to her that no reference to Bosasa should appear on the gift hampers or greeting cards.

Pieters said she believed this was to prevent the high-profile recipients of Bosasa’s largesse from being compromised.

The State Capture inquiry continues on Thursday with Nomvula Mokonyane to take the stand concerning Bosasa payments and receipt of state contracts. DM