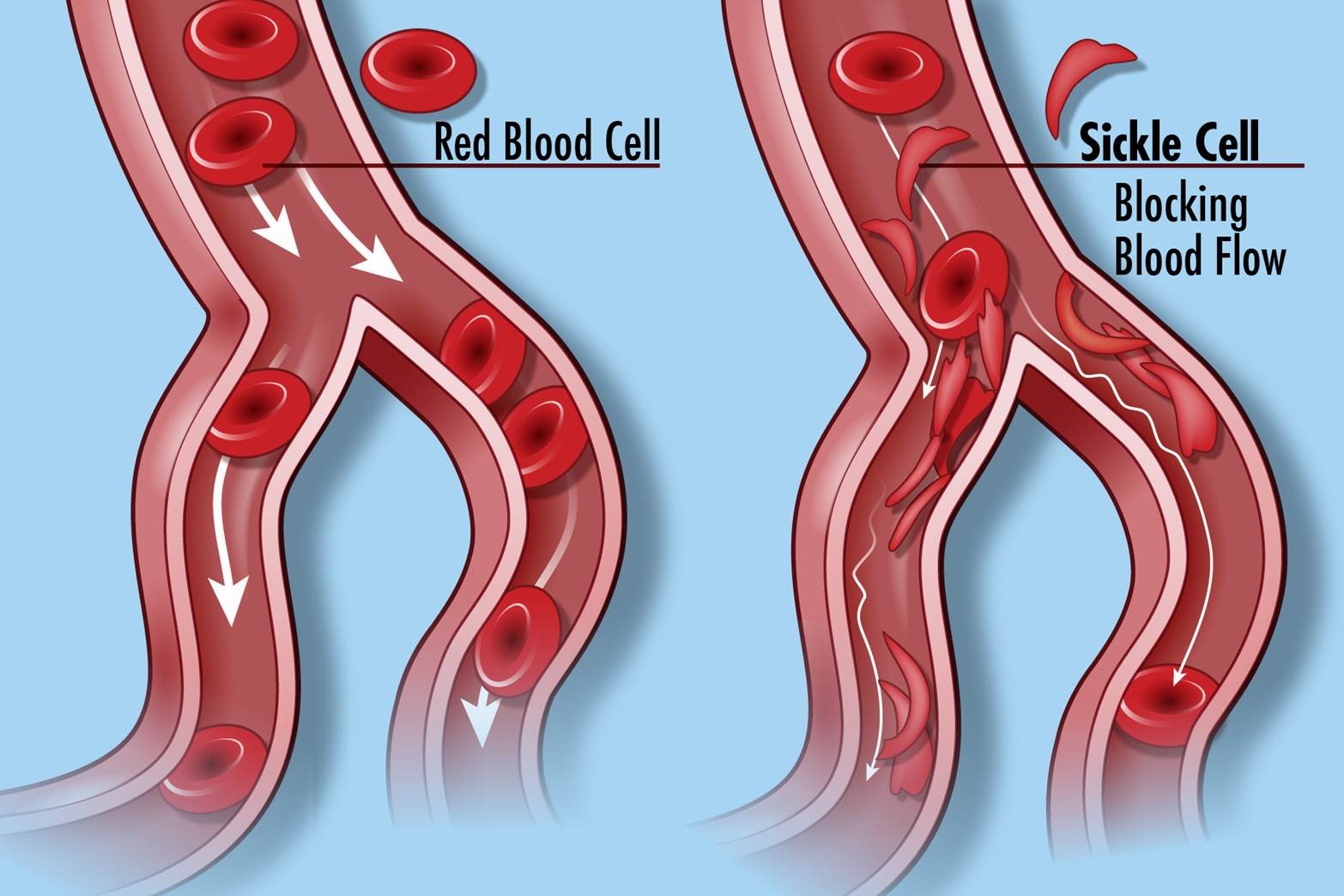 Normal blood cells (left) and the blood cells in sickle cell disease, which do not flow through the circulatory system smoothly. (Credit: Darryl Leja, NHGRI, CC BY 2.0)

80% of babies born with sickle cell anaemia are in sub-Saharan Africa. The disease in which red blood cells get stuck in blood vessels affects oxygen supply to the body.

A study performed in Cameroon by a University of Cape Town (UCT) professor may offer hope of treatment for people with sickle cell anaemia (SCA), a disease which affects hundreds of thousands in Africa.

Professor Ambroise Wonkam, principal investigator and director of Genetic Medicine of African Populations in the Division of Human Genetics at UCT, says though the condition was identified more than 100 years ago, a definitive treatment is still not widely available.

Normally, the flexible, round red blood cells move easily through blood vessels. In sickle cell anaemia, the red blood cells are shaped like sickles or crescent moons. These rigid, sticky cells can become stuck in small blood vessels, which can slow or block blood flow and oxygen to other parts of the body. (Read this for more information.)

“Among the 300,000 babies that are born with the condition every year, 80% are in sub-Saharan Africa,” says Wonkam. “It is, in essence, an African disease.”

Despite the prevalence of SCA in Africa, medical care has been less than optimal. According to Wonkam, it has been shown that, due to the lack of medical interventions, in most African settings, at least 50% of African children with SCA will die before they turn five years old.

However, the same regions of sub-Saharan Africa are also home to SCA patients who are 50 or 60 years old.

“Why is it that some people — who live in an environment that is not favourable in terms of healthcare access, and stressors including high temperatures, malaria and other infections — manage to survive while others die at a much younger age?” Wonkam asks. “Our hypothesis is that these long survivors living with SCA may be protected by some genetic factors.”

To test this, Wonkam and his team recruited SCA patients of 40 years or older, who had received minimal medical intervention, as well as a control group who had suffered strokes, which is one of the severe effects of SCA, and an intermediate group who were under 40 and never had a stroke. The research took place in Cameroon.

In the study, published in the journal Clinical and Translational Medicine, Wonkam and his team found genetic modifiers of long-term survival in individuals with SCA.

People who had survived longer had recurrent changes in specific genes. And patients who had strokes had a mutation in the blood coagulation pathway.

Another finding in the long-term survivor group was that they metabolised the micronutrient selenium efficiently. They also have genes that assist in keeping blood pressure low. Wonkam says that selenium supplementation is worth investigating.

Also, the study found, some patients were protected from some of the vascular complications of the disease by their ability to produce an amino acid called glutamine. Glutamine helps to protect the body against stress due to low oxygen which is one of the side effects of SCA. This ability to produce glutamine can also now be studied further as a possible treatment in other people with the disorder. Glutamine supplements could be one of the options.

“It is possible that genes with recurrent mutations that we found in numerous patients provide some protection, and have become prevalent in people with SCA by natural selection.” This information can be used in future in gene-modifying therapy.

Modifier genes, which change the actions of other genes, can be beneficial to the health of the patients by countering some of the negative effects of the disorder.

“By identifying novel modifier genes, our research is providing additional mechanisms to explain the long-term survival, or complications such as stroke in some patients,” says Wonkam.

“I believe this is probably one of the landmark findings that have been performed in Africa where most of these patients live,” he says. DM

A vast dust cloud in the centre of our universe possesses a chemical responsible for the flavour of raspberries and it smells like rum.