Nehawu doubles down during Covid-19: Protect us and pay...

Nehawu doubles down during Covid-19: Protect us and pay us or we’ll strike 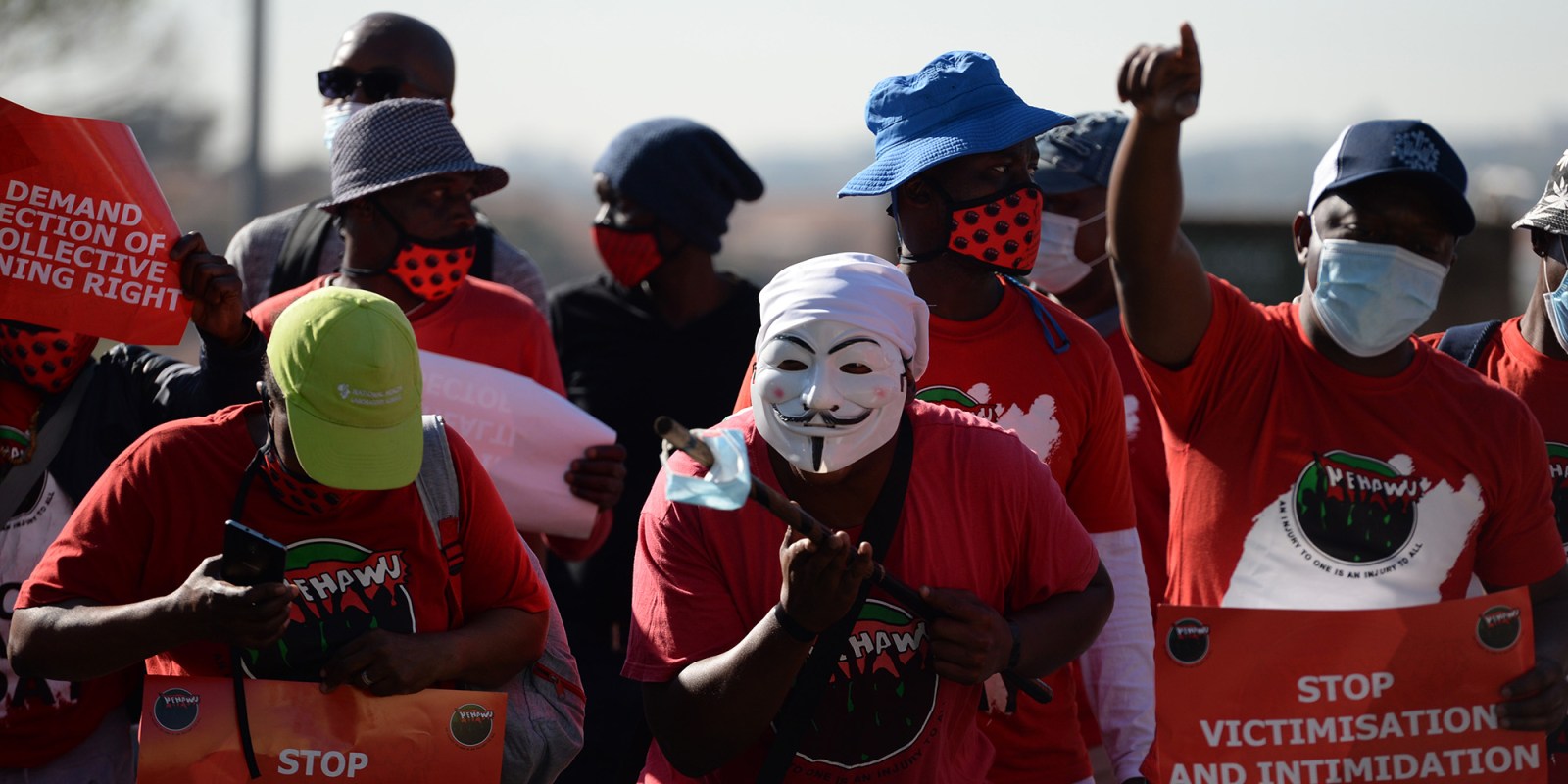 Frontline healthcare workers are more important than ever during the Covid-19 crisis, but the public sector’s largest union, Nehawu, is threatening to withdraw its members if the government doesn’t protect workers, and, crucially, pay them what they believe they’re owed.

On Monday, President Cyril Ramaphosa used his weekly newsletter to laud the type of public servant the country needs.

“Being a public servant is an honour and a privilege. It demands dedication, selflessness, professionalism, commitment and the utmost faithfulness to the principles of Batho Pele, of putting the people first,” he wrote.

No one knows that better than frontline healthcare workers, who have lost hundreds of colleagues due to Covid-19, some of whom are gearing to go on strike.

The country’s largest public-sector union, the National Education, Health and Allied Workers’ Union (Nehawu), has reiterated its threat to strike if the government doesn’t implement steps to protect workers from the coronavirus and pay employees a salary increase.

“Health and safety challenges have always been there, however, they have been exacerbated by the outbreak of the virus,” said Nehawu General Secretary Zola Saphetha on Monday.

“Workers continue to be paid peanuts and also not getting bonuses while being overworked because of understaffing.”

Nehawu, supported by trade union federation Cosatu and the South African Communist Party, will protest at the offices of premiers in each province on Thursday. It plans to withdraw its more than 200,000 members from all sectors of public work from 10 September 2020 if its demands aren’t met.

According to the department of labour, inspectors found that only 60% of workplaces were complying with Covid-19 regulations in May. Nehawu wants the government to commit to full compliance.

It’s also demanding that employees who have been exposed to Covid-19 return to work only after they have been in isolation for 10 days and undergone medical screening.

There have been multiple reports of managers at health facilities refusing to let workers who have been exposed to Covid-19 go into quarantine. Nehawu wants the government to explicitly bar managers from forcing employees to work if they have been exposed.

It is calling for the department of health to engage the Health Professions Council of SA to speed up the registration of foreign-trained doctors and for all outstanding healthcare posts to be filled.

Nehawu also wants the national government to centralise the procurement of personal protective equipment (PPE), which is currently handled by each province.

The union is particularly frustrated that its members are risking their lives while government officials have facilitated corrupt deals to benefit from the procurement of PPE.

Nehawu will begin its programme of action on Tuesday by holding prayer services for workers who have died due to Covid-19. On Wednesday, motorcades will visit key health institutions and drivers will honk their hooters.

The union plans to go on a full-blown strike if its demands are not met within a week of its protests, meaning it could withdraw its labour from health facilities from 10 September as the country continues to battle Covid-19.

“Through this programme we want to guarantee the health and safety of workers who go to work to sell their labour and not their lives,” said Saphetha.

“Non-compliance and the abuse of workers’ rights is the biggest threat to the containment of the Covid-19 virus in the workplace. Compliance with the various directives from government in response to the virus is not an option. It is a life and death issue and non-negotiable.”

Health Minister Zweli Mkhize met Nehawu and other unions after it detailed its plans to strike recently. He acknowledged workers’ concerns and said his department would adopt a policy of “no PPE, no work”.

On Monday, he again acknowledged workers’ safety concerns and said his department would only consider them resolved when a facility’s management and staff agreed to move forward because workers “know where the shoe pinches” even if the bosses dismiss their complaints.

“I have sat through with a number of unions together and at this point I have said that if there is any one health worker who is raising a concern of safety, that matter has to be taken seriously,” said Mkhize.

Workers’ frustration over their exposure to Covid-19 is amplified by the government’s decision not to pay public sector employees the increase they were due in April 2020.

“The time to engage on the battlefield is now and we shall not retreat nor surrender. Workers need their salary increase now which was due to come to effect on the 1st April 2020 as stipulated in [Public Service Co-ordinating Bargaining Council] Resolution 1 of 2018,” said Saphetha.

Finance Minister Tito Mboweni froze the salary increase for public sector workers, reneging on the agreement with unions, in his Budget Speech in February, before the Covid-19 crisis. The matter is now in court and before an arbitrator, with the government arguing that it can’t afford to pay.

The degree of pressure Nehawu can apply through industrial action might be limited. The union planned to strike at the National Health Laboratory Service (NHLS) last week, regarding a dispute over a different agreement.

But the NHLS, which is critical in the testing of Covid-19, went to court and had its workers deemed essential, obstructing the plans to strike.

Nehawu members have continued to protest during their lunch break at the NHLS and have embarked on a go-slow at other institutions. DM