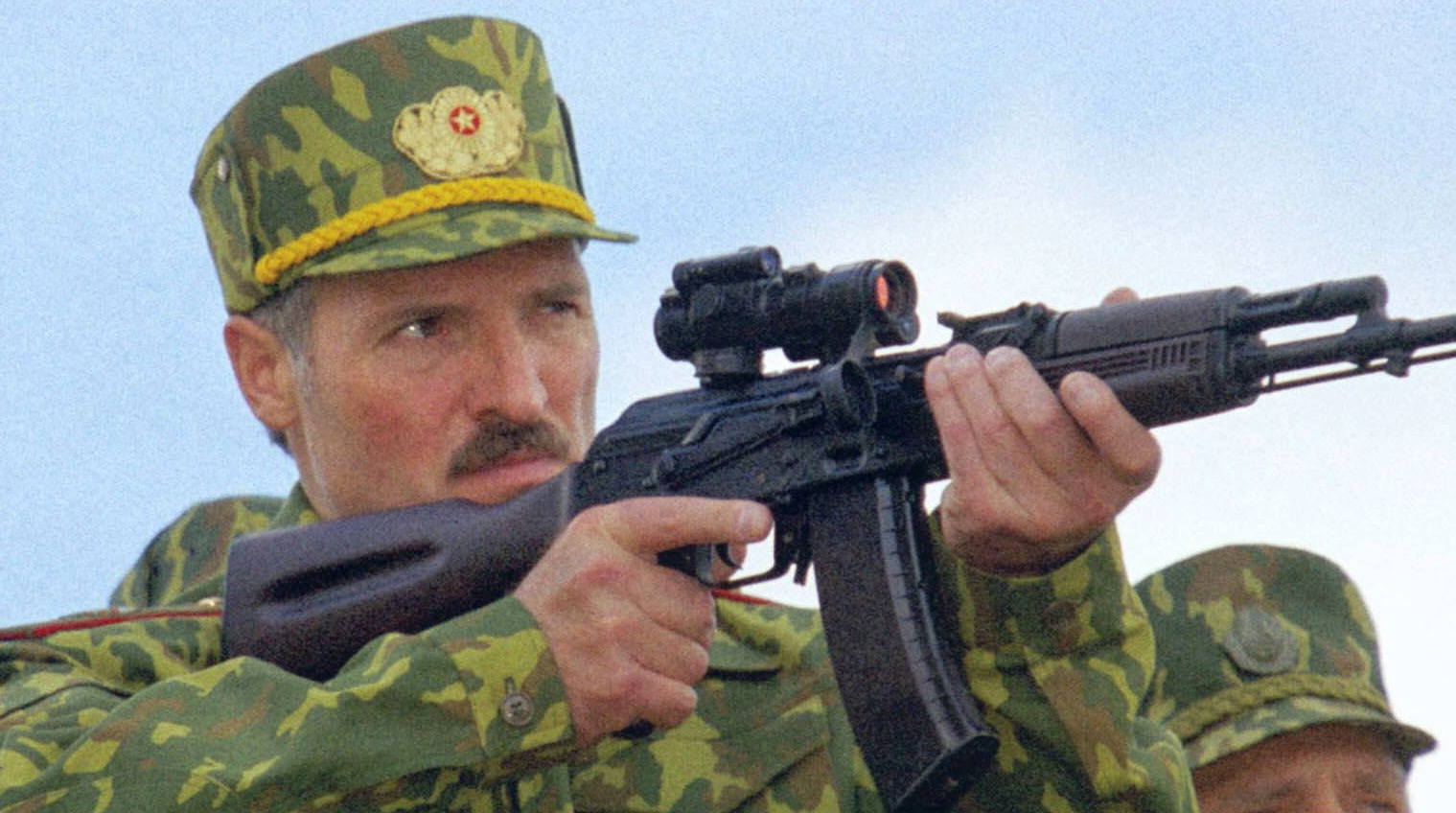 The UK military has been quietly building links with the Belarusian armed forces, including providing urban warfare training, despite the British government’s public criticism of Europe’s last dictator, Declassified UK has found.

The revelation comes amid massive pro-democracy protests in the Belarusian capital, Minsk, against Alexander Lukashenko, the country’s autocratic president and commander-in-chief, following the latest round of rigged elections.

On Monday, Britain’s Foreign Secretary Dominic Raab pledged to impose further sanctions on Belarus, saying: “The world has watched with horror at the violence used by the Belarusian authorities to suppress the peaceful protests that followed this fraudulent Presidential election. The UK does not accept the results.”

Although Britain has long publicly criticised Lukashenko’s regime for stage-managed elections and human rights abuses, UK military links with Belarus have steadily developed to include urban warfare training, joint military exercises and a night at an opera in Minsk.

Increasing cooperation has likely been inspired by London’s desire to woo Lukashenko and gain intelligence on a Russian-linked military, a senior associate fellow at the Royal United Services Institute (RUSI) has told Declassified.

In March, Britain’s elite Royal Marines took part in an unprecedented two-week military exercise in Belarus, whose armed forces are more allied to Vladimir Putin’s Russia rather than Nato.

Under exercise Winter Partisan, 28 British marines “shared essential experience and expertise” with a “Peacekeeping Company” from the Belarus 103rd Guards Airborne Division, in what was the “largest group of UK Armed Forces personnel to have trained in Belarus”.

The marines were drawn from 42 Commando’s Lima Company, who are specialists in “rescuing downed aircrew, military or civilians from hostile environments”, according to the Ministry of Defence (MOD).

The MOD said it was “all aimed at building trust and mutual understanding.” But political analyst Alexander Klaskovsky told Reuters: “The Belarusian leadership knows how Moscow reacts painfully to such things. Lukashenko is simply showing Moscow once again that there are plenty more fish in the sea and that he has alternatives.”

A week later, a UK diplomat noted that the government “is concerned about the recent arrest and detention in Belarus of over 100 people, including independent journalists, social media actors, human rights defenders and peaceful environmental demonstrators”.

The training by the Royal Marines was the culmination of years of attempts by the British military to build contacts with its Belarusian counterparts amid mounting tensions between the Kremlin and Whitehall.

In November 2019, senior military officials from Britain and Belarus signed a “bilateral cooperation plan for 2020” in London. The plan contained “a mix of reciprocal English-Russian language training, visits, teaching skills in the sphere of Peacekeeping Operations, Winter Warfare Training and Studies in Military History”.

The MOD would not tell Declassified whether this cooperation has now been suspended.

While in London, the Belarusian delegation “had a series of briefings on the UK military and a tour of some historic locations within the UK’s Ministry of Defence.”

Two weeks after the joint plan was penned, the Foreign Office publicly condemned parliamentary elections in Belarus which, it said, “did not meet international democratic standards” and which “did not provide for any meaningful competition”.

Belarusian troops had earlier won a silver medal at a British army competition in Wales known as Exercise Cambrian Patrol, which the MOD calls “the world’s toughest patrolling challenge”.

In September 2019, 20 troops from Belarus and Moldova participated in Exercise Urban Ranger in Wales alongside British troops. The delegation spent weeks “practising live firing and learning new urban warfare tactics” at Sennybridge Ranges in the Brecon Beacons, where troops can attack a mock village.

Major Glenn Thomas from the Royal Irish Regiment told ForcesNet, “The value and the benefits from providing short-term training teams [to Belarus] are immense. It builds our capability, it builds our capacity.”

He added: “Although we are delivering the training, it’s very interesting to see what they do, how they do it and sometimes to massage your own tactics potentially in the future.”

In June 2019, the UK government stated that it “has steadily increased its engagement with Belarus since the release of political prisoners in August 2015”. It added that British policy was based on “encouraging economic reform, respect for human rights and fundamental freedoms, and more responsible participation in the international rules-based system”.

The UK supports the EU arms embargo and restricted sanctions on Belarus which were initially introduced in 2004 in response to the disappearance of two opposition politicians in 1999 and in 2000. They ban the transfer of military equipment to Belarus but do not forbid technical assistance or training.

In November 2018, the MOD’s director for international security policy, Nick Gurr, visited Belarus to meet his counterpart and discuss “bilateral cooperation issues in the military sphere”, before signing a cooperation plan for 2019.

That same month, a Belarusian military instructor helped teach British weapons inspectors at a site in the UK. In October 2018, Belarusian troops again took part in Exercise Cambrian Patrol, winning a gold medal in their debut attempt. The British embassy in Belarus congratulated them on the result.

A night at the opera

Declassified has also obtained documents which show that staff and students at the MOD’s prestigious Royal College of Defence Studies (RCDS) spent five nights in Belarus in May 2018, where they attended official lectures on the country’s economy and foreign policy.

Delegates toured Belarus’s military academies and planned to visit the Parliament in Minsk. During the trip, discussion topics included “what can the world do to avoid a new Cold War?” and “how to make eastern Europe an area of cooperation rather than confrontation?”

The trip also included cultural elements, such as a night at an opera where delegates watched Mozart’s The Marriage of Figaro.

A month later, the Foreign Office told the UN Human Rights Council of “continuing human rights violations in Belarus, in particular restrictions on civil society and freedom of expression” and of being “very concerned about the continued use of the death penalty in Belarus”.

In April 2017, the Foreign Office announced it was trying to recruit a former officer from the Belarus Armed Forces to act as a defence section support officer/military cooperation programme adviser at the British embassy in Minsk.

The successful candidate would be responsible for giving specialist advice on “all issues which may affect UK-Belarus bilateral military relationships” and “Maintain a network of contacts within BMOD [Belarus MOD], units of the Armed Forces, veterans’ organisations, defence commentators and think tanks.”

They would also be “responsible for detailed planning of visits into Belarus and the UK by military delegations from both countries”.

The UK government noted at the time that “Belarus remains marred by systematic violations” of human rights and was “concerned about restrictions on the rights to freedom of expression and of association, particularly the freedom of the media, which remains severely limited”.

As early as June 2015, the RCDS had sent a delegation to Belarus, according to Freedom of Information responses obtained by Declassified. The programme was similar to 2015, with the addition of a visit to the Belarusian military information agency VAYAR, which is effectively a state-run propaganda agency.

Professor Mark Galeotti, an expert on Russia at the RUSI think-tank, told Declassified: “I don’t think there is any fear the Belarusians will learn public order techniques from the Brits, not least as the army hasn’t – so far, at least – been involved in the repressions.”

However, he noted: “The decision to conduct minimal training and similar cooperation with Belarus was part of an ill-starred attempt to rebuild bridges as sanctions for a previous crack-down were lifted.

“The idea was indeed to woo Lukashenko but also gain a sense of how an army essentially trained and equipped Russian-style trains and fights. It’s quite normal to maintain these kinds of relationships with frankly unpleasant regimes, and it may be that some useful intelligence was gained.

“The problem is the context: the West clearly miscalculated when they thought softening their stance towards Lukashenko’s regime – which is, after all, more repressive than Russia’s – would do anything other than let him feel we weren’t serious about human rights in Belarus.”

The MOD did not respond to repeated requests for comment.DM