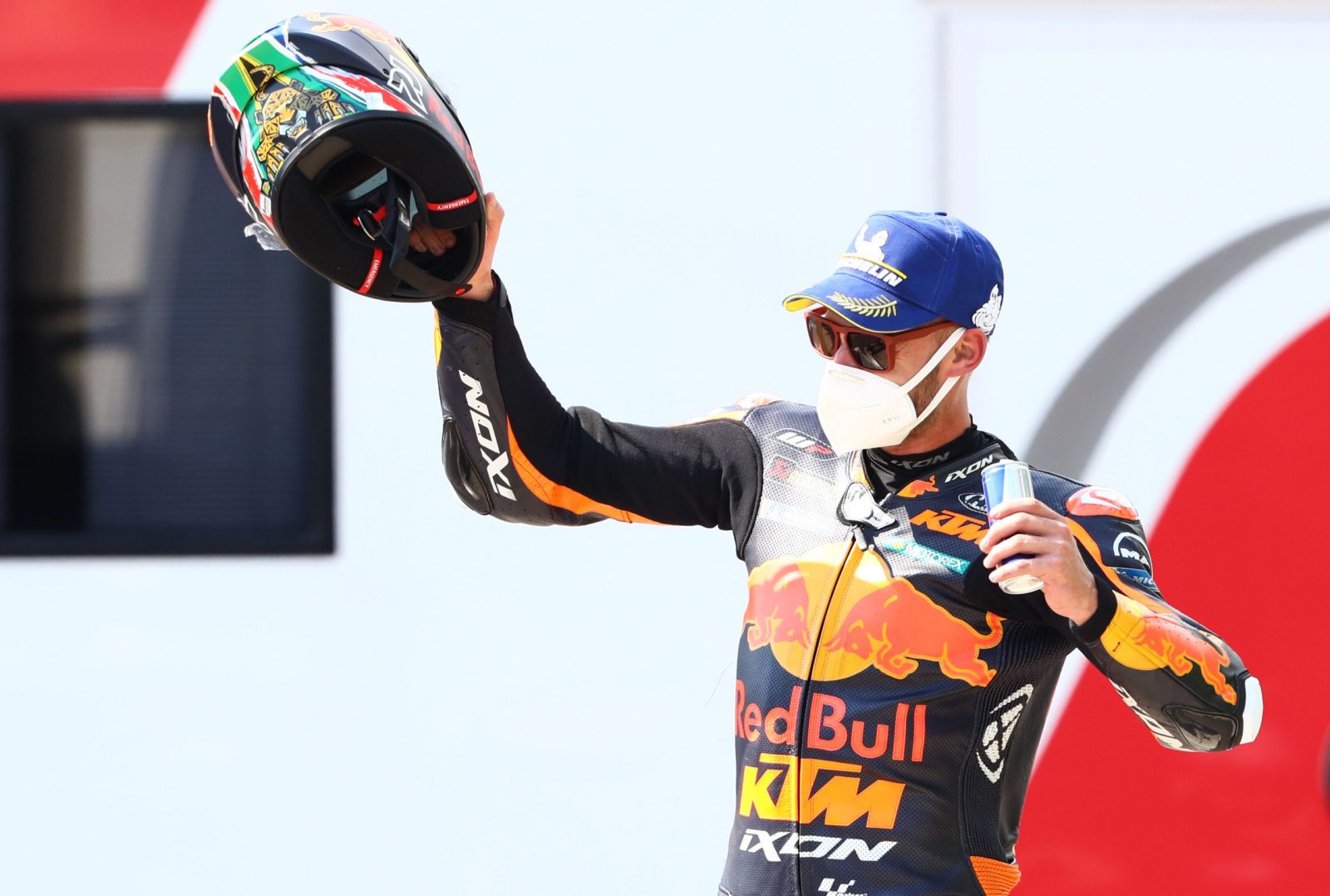 Brad Binder became the first South African to win a premier class world championship motorcycle race when he claimed victory in the Czech MotoGP at Brno on Sunday.

Things don’t happen fast in Carletonville, which is primarily known as a mining town. It once had a decent club rugby team and produced 2007 Rugby World Cup winner Jaque Fourie. Racing drivers generally don’t come out of the West Rand town, although many people have been known to get out of there quickly.

The 24-year-old Binder though, has since taken the fast lane to the top of world motorcycling quicker than anyone imagined it would happen.

The 2016 Moto3 world champion was competing in only his third Grand Prix of the sport’s premier class Brno on Sunday. After scoring just three world championship points in his first two starts of the 2020 season, starting seventh on the grid showed improvement and promise, but did not immediately indicate that a Grand Prix win was imminent.

Not since six-time world champion Marc Marquez won a Grand Prix in his first season in MotoGP in 2013, has a rookie won a race. Binder is in exalted company.

The win was also the first for the Red Bull KTM Factory Team in the sport’s premier class. They delivered earlier than promised when they entered the elite class in the sport in 2016. KTM set a goal of winning races within five years, but that was before they fully realised what a talent they had in Binder, who rode a KTM all through his formative years in Moto2 and Moto3.

“This is a day I have dreamed about since I was a little boy,” an emotional Binder said after the race. “Today, it came true. I really wish my parents were here because they were the ones that backed me from the beginning.

“I can’t thank my team enough. They put an absolutely insane motorbike underneath me this weekend. Thank you to everyone at home for always supporting me. I hope that this is the start of many more.”

In a country desperate for some good news amid the coronavirus pandemic and a free-falling economy, the power of sport showed that it could unite the country again, albeit briefly. Social media lit up with happy messages sharing in Binder’s exploits and even President Cyril Ramaphosa did not let a good public relations opportunity go to waste.

“Brad Binder made all South Africans proud today with his historic victory,” Ramaphosa said in a statement released shortly after Binder crossed the chequered flag 5.2 seconds ahead of Italian Yamaha rider Franco Morbidelli.

“We share in his elation and look forward to his long and successful career at the top of his sport,” Ramaphosa said. “Coming as it did on Women’s Day, which brings us together as a nation, Brad’s victory in the Czech Grand Prix provides us with inspiration, hope and pride and lifts our spirits at a time we need this.”

Binder was introduced to the sport through his father Trevor. He has made steady progress since competing in the 2011 Red Bull Rookies Cup, which opened the door to 125cc racing the following year. He was based in Spain in those early years and spent months away from Trevor, who remained in South Africa to work and fund his career, and look after younger brother Darryn. Brad’s mother Sharon stayed with him in Spain and attended his races across Europe.

Binder’s natural speed and obvious talent caught the eye of Finnish enthusiast Aki Ajo, who owned a team called Ajo Motorsport. Ajo was famous for spotting talent such as Marc Marquez, who rode for him in 2010.

In 2020 Binder was elevated to the Red Bull KTM Factory Team after Frenchman Johann Zarco left the organisation at the end of last season. Zarco was third in Brno on Sunday having started in pole position.

Zarco made a poor start and immediately dropped to sixth with Morbidelli and world championship leader Fabio Quartararo moving into first and second. Binder moved up to fifth, just behind Spanish teammate Pol Espargaro in the opening corner. As the race settled down Binder, whose bike was brilliant under braking, gradually carved his way through the field, eventually taking the lead on lap nine.

“Since the day I started in the Red Bull Rookies Cup, it’s been a consistent grind to get here,” Binder said at an online press briefing.

“I sat behind Fabio and could keep his pace quite easily and after getting past him and I caught Franco (Morbidelli) I sat behind him for a lap. I saw I had a good advantage in terms of grip so I attacked after I made the overtake (to open a gap) and then just waited for someone to come at me in the last three laps. My pace dropped off, but obviously everyone’s did too.

“So, I just pushed so hard in the last three laps and they were the cleanest I think I have ever done. My team gave me such a great bike today. When I won for the first time in Moto3 I thought that was insane and if it was the end, I was okay.

“But if you look at where we are today, it’s unbelievable. I’ve won in all three classes, all with Red Bull and all with KTM. And I hope this is the beginning of something great.”

Binder has moved to fifth on the world championship table with 28 points. Frenchman Quartararo leads with 59 points. DM