Women on Farms Project calls for moratorium on farm evictions 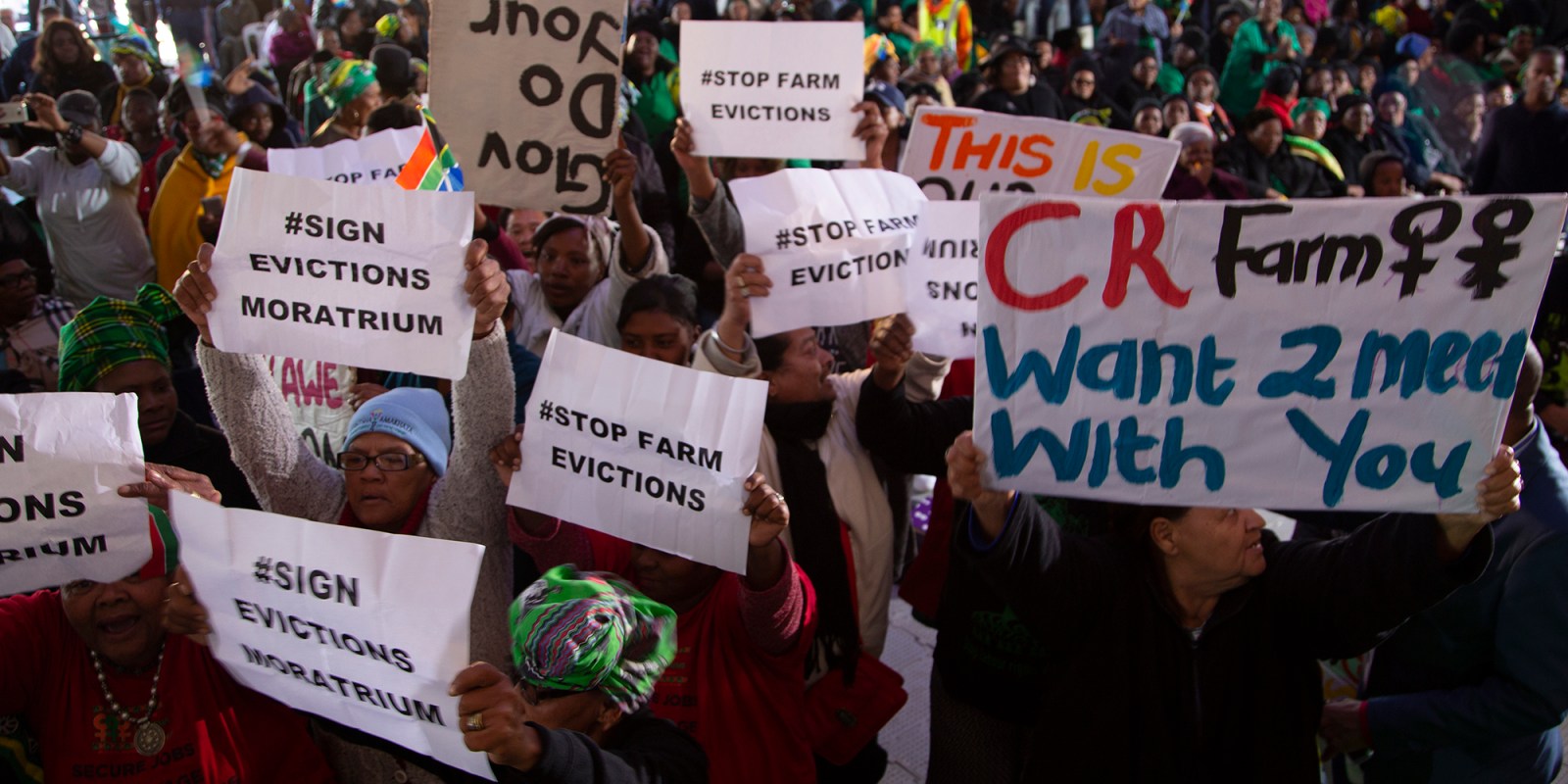 President Cyril Ramaphosa’s Women’s Day address in Paarl in 2018 was disrupted by protesters who called for him to sign a moratorium on farm evictions. (Photo: Leila Dougan)

Women’s access to land and their continued eviction from farms was the subject of a webinar held by the Farmworkers and Dweller advocacy group on Tuesday.

The webinar, held by the farmworkers and dweller advocacy group, called for farm women to have access to land and for an end to farm evictions.

Solomons said Covid-19 has highlighted that, “as farmworkers, we are completely dependent on white male farmers for jobs and accommodation”.

She said since 1994 there have been improvements such as labour laws and rights for farmworkers, but the landscape of the agricultural economy needs to change. She pointed out that while white, male farmers now have more money and more rights, the workers – mainly black women who are seasonal workers – “are getting more and more poor”.

Also discussed was the promise of a moratorium on evictions, which had been ordered by then-deputy president Cyril Ramaphosa in 2014, according to a report in City Press. But, Louw said, the group was “still waiting on the promises he made many, many years ago”.

One such eviction is that of Fransina Petersen, a mother of three. Petersen was born on a farm in Klapmuts, in the Cape Winelands and worked on the farm. In February 2020, following an eviction order, she was kicked off the farm. She currently lives with her mother-in-law and said, “I sleep in my car, so my children can sleep in the room.”

Explaining how Petersen was removed, Louw said she ended up in a “municipal graveyard – that’s where the sheriff dumped her”.

Read in GroundUp about Petersen’s eviction here and the response by the owner of the farm, Lance Bouma, here.

Dawn Jacobs, an activist with the Drakenstein Civic Organisation, said: “It breaks my heart that the president doesn’t want to make a moratorium on evictions.”

She also questioned when expropriation without compensation would occur, saying there were 10 farms without owners within the Drakenstein municipality.

“Why can’t the municipality build houses for farmworkers there?” she asked.

Daily Maverick has previously reported on a march held by Women on Farms calling for an end to evictions:

Farmworkers demand their rights while 20,000 in Drakenstein municipality face evictions

The group submitted a memorandum electronically to the Department of Agriculture, Land Reform and Rural Development. The memorandum, which Daily Maverick has seen, was addressed to minister Thoko Didiza and deputy minister Mcebisi Skwatsha, and said “due to the various impacts of Covid-19, including the ban on the transportation, export and ban of alcohol sales, thousands of farmworkers, especially women seasonal workers, face imminent job losses. Job losses will inevitably lead to greater numbers of farm evictions.”