Farmworkers demand their rights while 20,000 in Drakenstein municipality face evictions 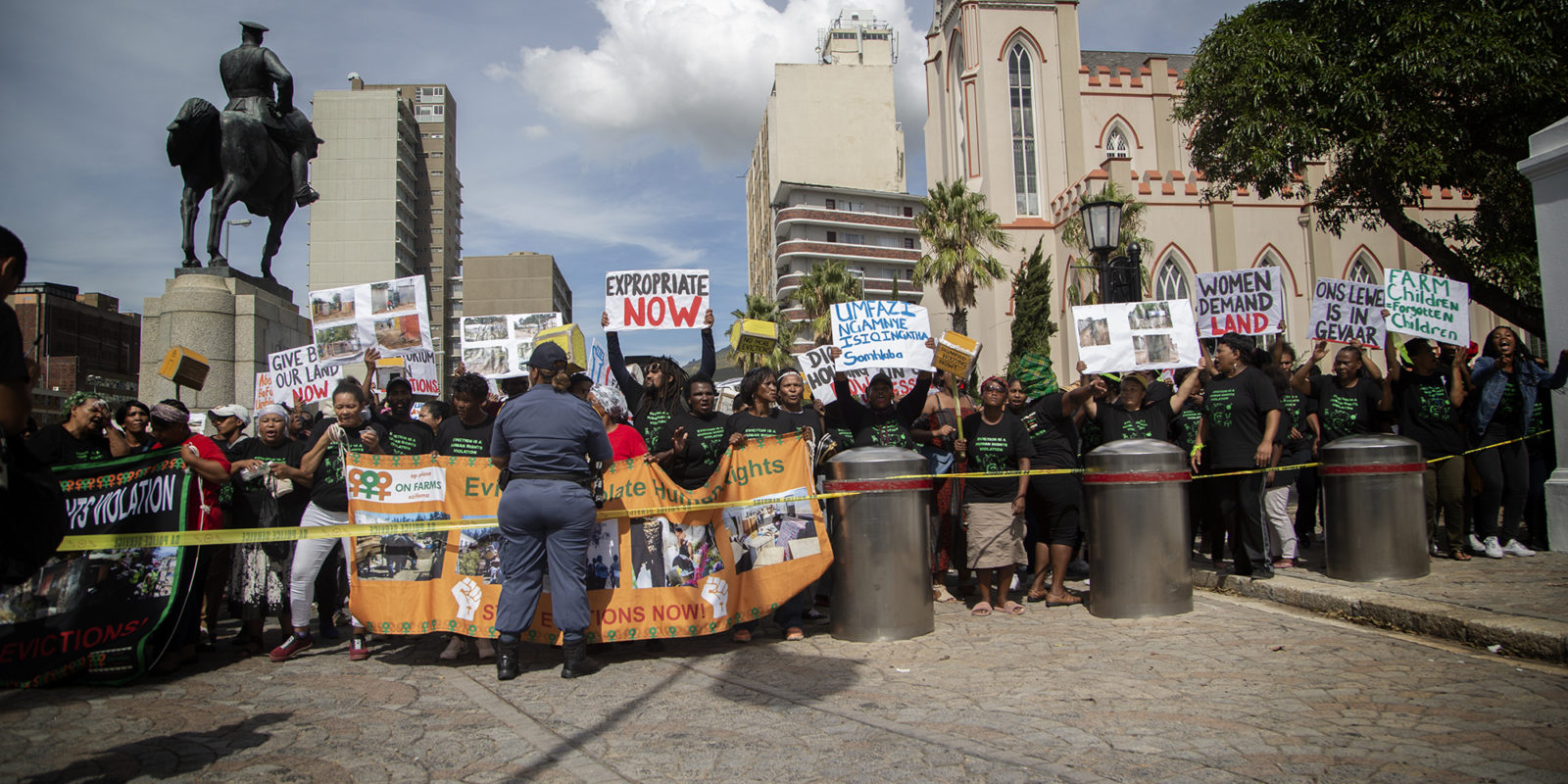 Farmworkers and farm dwellers from the advocacy group Women on Farms gather outside Parliament, Cape Town to deliver a memorandum demanding decent housing and a monatorium on farm evictions, 20 March 2019. Photo: Leila Dougan

Farmworkers across the Western Cape are still facing evictions from farms with up to 20,000 people facing evictions in one municipality. While South Africa observed Human Rights Day on 21 March, farmworkers question when their rights will be respected and enforced by the president and the Ministry of Rural Development and Land Reform.

Translated into English, this Afrikaans protest song means, “they hang us on a wire fence, we’re looking for Cyril to set us free.”

The marchers, predominantly women associated with the Women on Farms Project — a non-profit organisation that helps female farmworkers in communities around the Western Cape — strode to Parliament and called for president Cyril Ramaphosa to stick to his 2014 commitment to ban legal and illegal evictions.

In 2014, while still the country’s deputy president, Ramaphosa promised to halt farm evictions after a meeting with agricultural and labour representatives in Paarl, Western Cape, according to City Press.

But on Wednesday, the day before Human Rights Day — a day set aside to remember those who died in Sharpeville and other areas around South Africa under the apartheid regime — farmworkers questioned what rights they had, even in a democratic South Africa.

The Women on Farms Project held a rally at Cape Town’s Community House — a historic site of activism within the city — then marched to the gates of Parliament to hand over a memorandum to the president and Maite Nkoana- Mashabane, Minister of Rural Development and Land Reform.

Farmworkers from areas in the Cape Winelands such as the Drakenstein municipality and as far as Robertson spoke of poor treatment they received at the hands of farmers, especially if the farmer wanted to evict the farm worker, or dweller, in the case of a farm worker’s next of kin.

Farmworkers and dwellers said they also had had enough of the ill-treatment and secondary trauma at the hands of police officials when they were evicted from farms they had either been born on or worked on, in some cases both.

“Twenty-five years into our democracy, what is the significance of Human Rights Day for farmworkers?” questioned Collette Solomons, a director at Women on Farms.

Solomons asked how farmworkers could celebrate Human Rights Day when they were threatened with evictions every day on the farms they worked on, where they had limited access to water, decent sanitation and electricity.

Solomons told farmworkers and dwellers during the rally evictions were taking place at a rate the organisation could not keep up with:

“Most of us don’t know the number of evictions taking place”.

The Drakenstein municipality, which covers areas such as Paarl and Wellington in the Cape Winelands, has up to 1,200 eviction cases on the court roll — which could see as many as 20,000 people facing evictions.

Aida Plaatjies, 48, from Simondium near Paarl, has lived on the grounds of a farm for 30 years, but now faces eviction.

She was moved from the farm she had been living on to a shack where she does not have access to proper sanitation. Describing her situation, she said:

“I still have to use a bucket. I’m not young anymore, sometimes I need to ask my children to help me.”

“That minister Bonginkosi (Madikizela, MEC for Human Settlements) came, saw and did nothing,” said Plaatjies.

During the rally at Community House, farm worker after farm worker told stories of evictions and the fear of moving from a quiet rural area into a new and dangerous area where they are not used to high levels of crime.

Susan Smith, who Daily Maverick met in 2018, was evicted from a farm into an informal settlement.

“We live in danger, in between pangas and knives,” she said, describing the move from a farm named Soetendal to an informal settlement named New Rest on the outskirts of Wellington.

“Young girls are not attending school any more,” she said, and told the audience that children who had attended schools previously were addicted to drugs and alcohol.

“I don’t know what to do any more, I don’t want to live there any more,” said Smith.

Chris Nissen, a commissioner at the South African Human Rights Commission, said he had appealed to the president for the moratorium on farm evictions.

There are good farmers, admitted Nissen, but “daar is die vrot aartappels wat die hele plaas eienaars vrot maak” (There are rotten potatoes which cause all farm owners to be labelled as rotten).

Brigadier Neville Marila from the Paarl police station clarified the role of the police during a farm eviction:

“We need to check if the evictees are safe and you are not assaulted,” he said. The police also needed to ensure the safety of the bailiffs carrying out the eviction notices.

Farmworkers said police were often heavy-handed. One recalled how a policeman called her a “tief” (bitch) during an eviction from a farm.

Marila provided his number to the farmworkers to contact him about individual cases of police brutality and complaints about poor police behaviour.

After the farmworkers shared their stories, they marched to Parliament to hand over the memorandum to the president and the minister.

Neither the president nor the minister were present to receive the memorandum.

Thozama Diamond, from the Department of Rural Development and Land Reform’s Cape Town office, signed the memorandum and assured the audience the department would get back to Women on Farms “within three weeks”.

The marchers were angered when The Presidency representative Charles Ford told them:

“I’m going to be honest with you, it’s going to take a minimum of four weeks to… respond.”

Ford tried to explain the administrative process required to respond to the memorandum, but was cut off with loud jeers from the marchers, who shouted from “we won’t vote” to one shouting “don’t throw away this paper”.

“We’ll be back if there is no progress on this matter.” DM

Daily Maverick has written extensively on the evictions farmworkers are faced with. Read some of these articles:

In the Boland, women from farms take their protest to Ramaphosa’s stage

The Scientists Collective • 4 hours ago