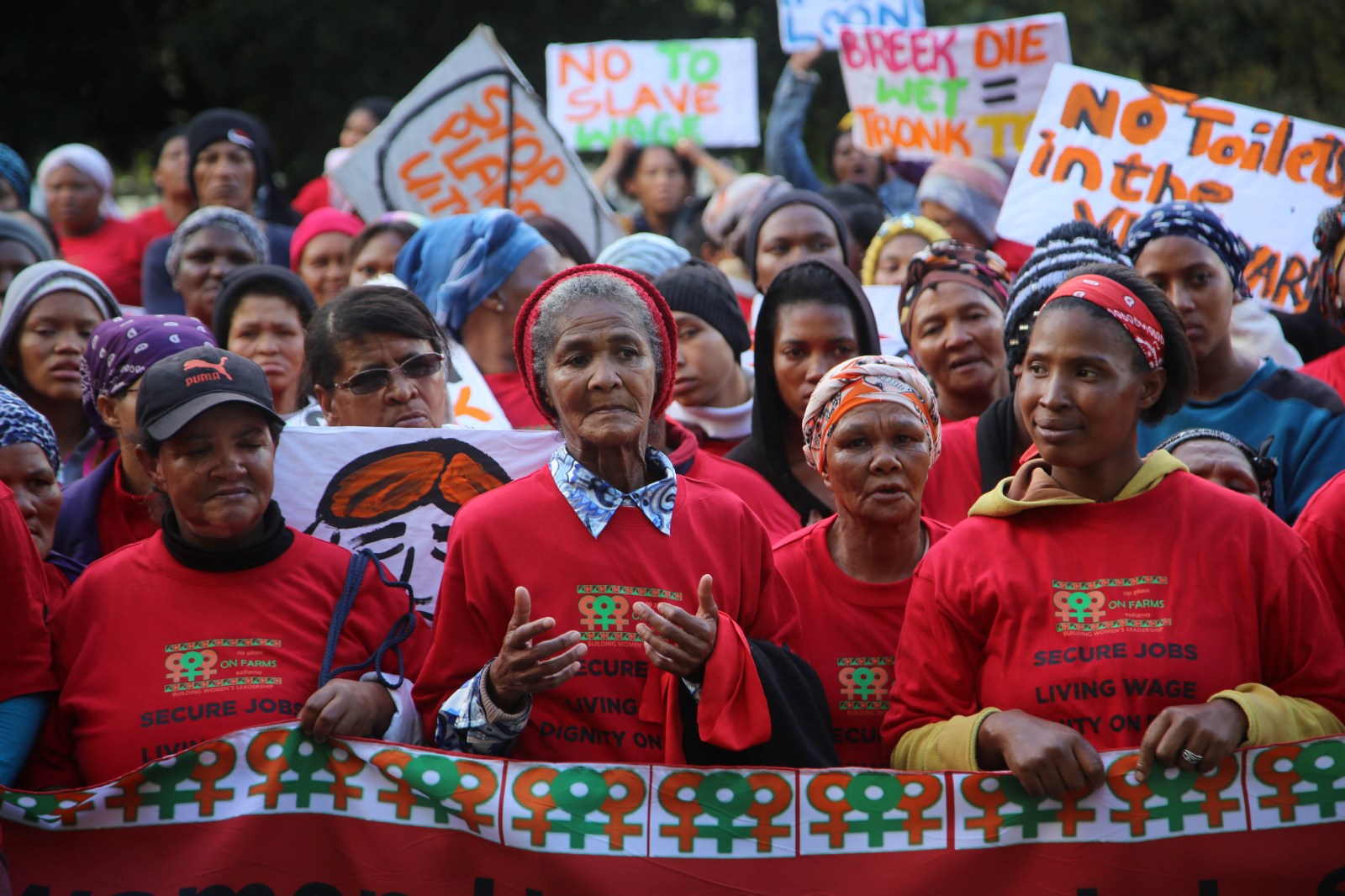 Farmworkers from communities in the Western Cape protested against maltreatment on Tuesday, the same day as the National Minimum Wage Bill was passed by the National Assembly.

Women farmworkers have complained that they do not have ablution facilities and are not protected from pesticides while at work on the land.

These were among the list of complaints from farmworkers from Western Cape communities during a protest against the maltreatment they face by farmers.

Roseline Engelbrecht, Labour Rights Programme co-ordinator for Women on Farms, which organised the discussion and march, said an invitation was sent to members of Parliament’s portfolio committee on labour, but they could not attend as they were busy with laws that needed to be passed, including the minimum wage bill.

Engelbrecht said Agri West Cape had also been invited but did not attend.

Farmworkers spoke about their experiences in the presence of two officials, David Esau from the national department of Labour, and Alan Winde, Western Cape MEC for Agriculture, Economic Development.

“We don’t have toilets, we have to pee in the bush…. It brings infections,” said Louisa Warries, a seasonal farmworker.

Warries said she is among seven women who feel uncomfortable urinating in the bushes while working, especially because there is a man who works with them.

Another complaint was that the farmer does not provide protective clothing. When workers are exposed to poisonous pesticides, Warries said, “the farmer said we must go back to work, even when the poison was only sprayed half an hour before. It’s not fair.”

“You don’t know how hard a farmworker’s life is. I’m tired of crying,” said Linda Norman from Wolseley.

As the audience clapped and shouted in support, she said: “We women are the ones that suffer the most.”

Norman said she was sick of complaining about farmworkers’ living conditions to Esau, who serves as the directorate for inspectors.

Esau, who was present during the discussion, agreed that it was dangerous to work with poisons without protection. Faced with a barrage of questions and complaints from the farmworkers – including one woman who showed him her tiny piece of paper her boss had given her as a payslip – he focused his few comments on the national minimum wage, saying “we all wait to see what happens”.

Esau said that with the new minimum wage, sectoral salary systems would fall away.

“It (the national minimum wage) will make a big difference in your life,” said Esau.

Winde called on workers to supply names and details of farms that were allegedly committing malpractices, and full details of the complaints.

Winde added that with the drought, jobs in the agricultural sector was a huge issue and projections show that up to 7,ooo agricultural jobs might be cut in the next season.

During the march to the Agri West Cape offices in Paarl, workers handed over a memorandum to CEO Carl Opperman.

Opperman smiled as farmworker after farmworker talked about their bitter experiences.

“Why are you smiling?” shouted one farmworker, who was crying as she spoke.

One farmworker in the audience took the microphone and described how her boss called her “bobbejaan” (baboon), while another farmworker said her boss told her she has “bobbejaan handjies” (baboon hands) if she let anything slip out of her hands while working.

“Genoeg is genoeg,” (enough is enough) said farmworker Corina Kana, who added that farmworkers “are seen, not heard”.

Handing over the memorandum, Engelbrecht said:

“As we celebrate workers and the workers who have fought for workers’ rights and social justice, the rights of thousands of South African farmworkers, particularly women, are routinely violated by farmers.”

The memorandum included the following demands to Agri-Western Cape:

“Agri Western Cape has always encouraged farmworkers to make contact with the relevant authorities immediately in any case where their employers are violating the law. Women on Farms should encourage and assist their members to lay charges immediately.”

Responding to a query about their absence from the meeting, Boshoff said Agri Western Cape informed Women on Farms via e-mail that they were unavailable.

“However, we extended an invitation to them to meet at our office to discuss the morning’s meeting and the issues on the table. They are yet to respond.”

Boshoff said any farmer who was a member of the organisation who was found guilty of malpractice would have their membership suspended. DM

Fin24 reported that Labour Minister Mildred Oliphant explained that the national minimum wage sought to improve the lives of the lowest-paid workers in the labour market.

Business Tech reported that workers who do not fall under the farming/ forestry sectors, the domestic sector, government’s Expanded Works Programme and learnerships will earn the proposed R20 an hour minimum wage.

Under the National Minimum Wage Bill, farmworkers will earn R18, which will be adjusted in two years.

The bill needs to go before the National Council of Provinces before being signed into law by President Cyril Ramaphosa. DM