In the Boland, women from farms take their protest to Ramaphosa’s stage 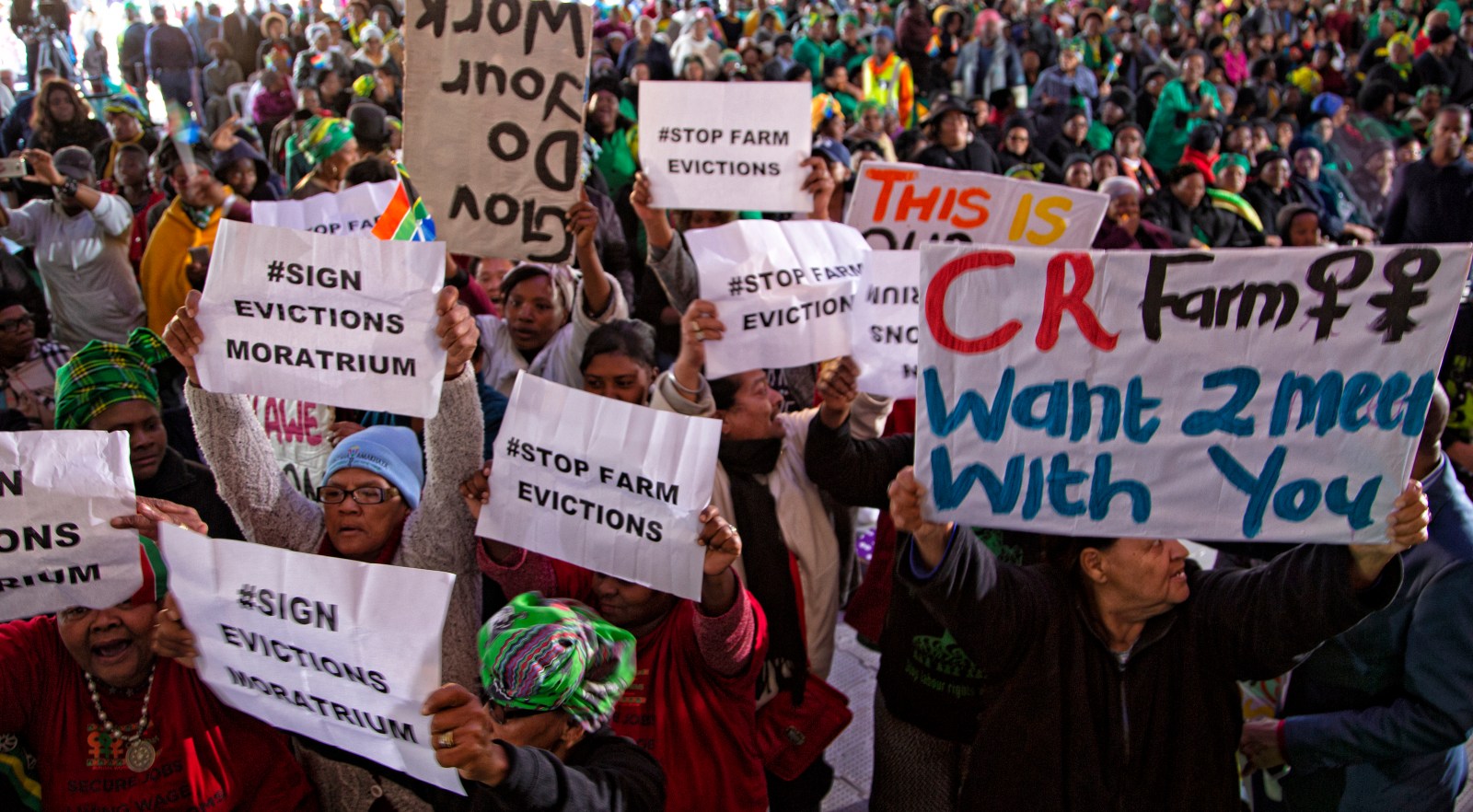 President Cyril Ramaphosa’s Women’s Day address in Paarl was disrupted by protesters who called for him to sign a moratorium on farm eviction. 9 August 2018. Photo: Leila Dougan

During national Women’s Day celebrations in the Boland region of the Western Cape, about 20 women marched on to the stage, asking President Cyril Ramaphosa to address them in their fight against farm evictions.

“I can’t sit on the ground, my knees,” a farm worker told Bathabile Dlamini, minister of women in the presidency, after walking up on the stage to ask the president to address them about farm evictions and land rights for female farm workers.

“We want farm evictions to be stopped,” said Betty Fortuin, “we want the president to sign the moratorium to stop farm evictions because our families, they have to live in hokkies [shacks].”

She was speaking outside the stadium in Paarl, where ministers addressed them after they had been asked to leave the stage while the president was making his address.

Rural Development and Land Reform Minister Maite Nkoana-Mashabane led the group of women, from the Women on Farms Project, from the main stage. Outside, she appealed to them:

“Can we listen to the president? Bring your issues here so that we can respect the president and make sure that he implements.”

“In 2014, in Paarl, then deputy president Cyril Ramaphosa undertook a moratorium on farm evictions,” Women on Farms director Collette Solomons told Daily Maverick. She said the group thought that given that it was Women’s Day and celebrations were held in Paarl, it would be fitting for them to ask what happened to the moratorium.

Instead, there has been an increase in farm evictions, said Solomons, and within the Drakenstein municipality, under which Paarl falls, there are “1,200 evictions pending within the next weeks, months”.

Solomons told Daily Maverick the ministers agreed that something needed to happen to stop farm evictions. When their protest was finished, an official from the president’s office came to take their details.

During the president’s speech, he made reference to the ongoing land debate, saying:

“Women who live in rural areas must have their right to land recognised and enforced, and must have the means to use their land to improve their lives and the lives of their families.”

“It is essential that we use this process to ensure equitable access for women to land in both rural and urban areas.”

Ramaphosa also announced a date for a National Gender Summit. He was responding to a memorandum submitted to him at the Union Buldings during the #TotalShutdown protest on 1 August where women demanded a summit be convened.

“Government has agreed that this National Gender Summit should take place on 31 August to forge consensus on approaches to effectively and urgently deal with the crisis of gender-based violence, discrimination against women and gender disparities.”

The recommendations of the Gender Summit must be comprehensive, guiding the work of government and the activities of all stakeholders, he said.