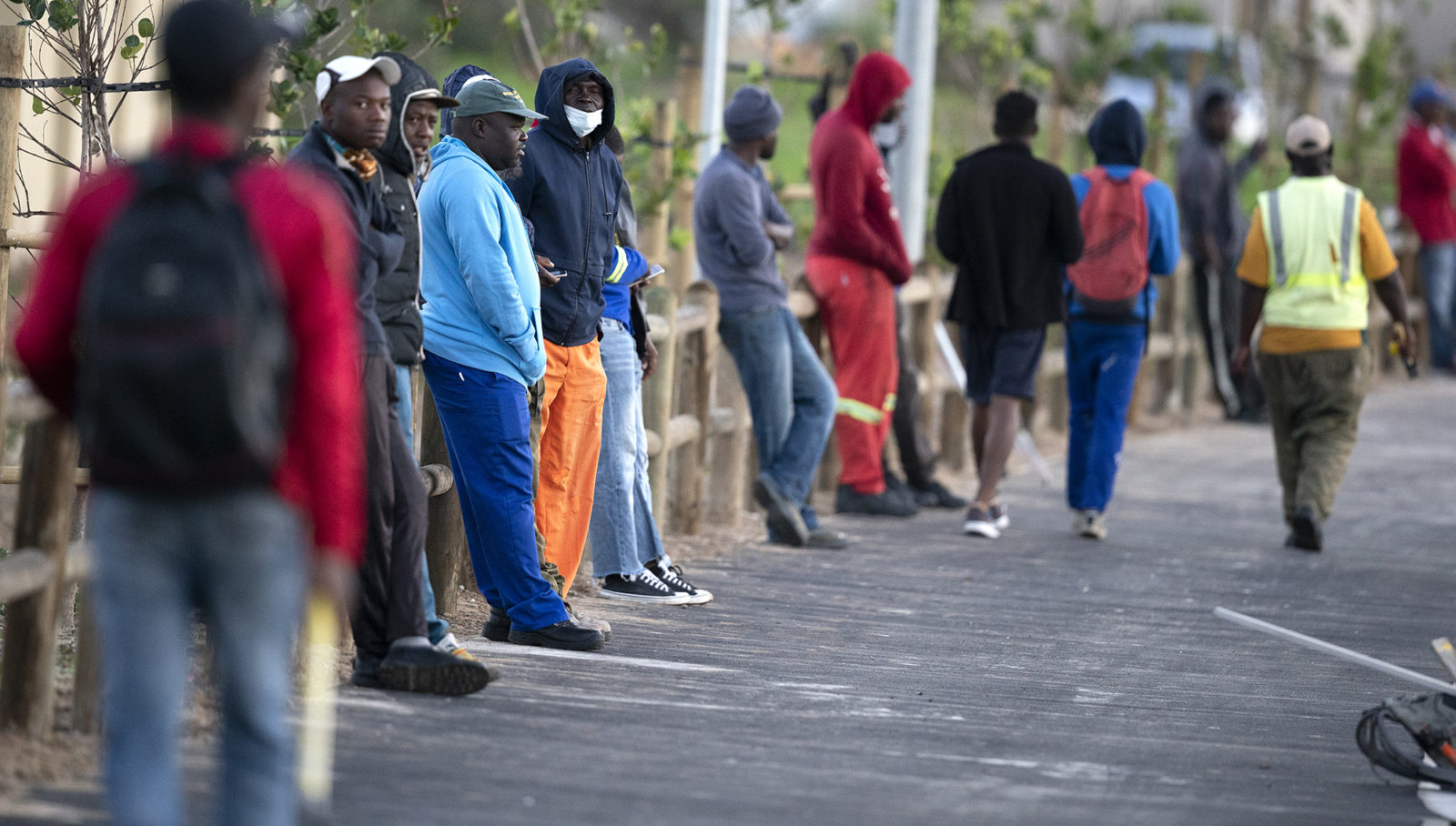 The second-quarter growth statistics released in the US and Euro-zone confirm the record-breaking knock the global economy has experienced as a result of the pandemic. The extent of South Africa’s economic decline during the lockdown has yet to be revealed. Mixed messages from available economic indicators make it more difficult to see whether it is likely to surprise on the up or downside. What is not in doubt is the urgent structural reforms that are needed to reverse decades of deep domestic economic damage.

The much-awaited quantification of the Covid-19 lockdown’s cost to economies began to trickle through last week, with the US and Europe experiencing their biggest second-quarter declines on record.

The declines were, however, in line with admittedly dire expectations. While this may be relatively encouraging, it doesn’t by any means indicate that these economies are out of the woods yet. The US has yet to slow the pace of its Covid-19 infections — total infections have doubled since late June — and there is more and more evidence of the strain this is putting on the economy. If the US does not begin flattening the curve, the third quarter, previously seen as the light at the end of the tunnel, may be the quarter to worry most about in 2020.

Europe isn’t feeling the same economic headwinds right now, primarily because the rate of infection flare-ups in the region appears more manageable than the US, and there is a view that the region may exit recession sooner than the US.

In South Africa, the wait is still on to see just how much the pandemic officially damaged economic growth in the second quarter. The official second-quarter GDP figures are only due to be published in a month’s time.

For the moment, however, other indicators that give us a sense of how the domestic economy is doing are sending conflicting messages. While the July Absa Purchasing Managers’ Index declined slightly compared to the previous month, it remained in the expansionary territory above 50 and there was another month-on-month improvement in conditions in the manufacturing sector.

As shown in the graph below, the Business Activity Index remained elevated even after retreating slightly during the month. In contrast, the New Sales Orders Index experienced a significant decline.

The Bureau for Economic Research (BER) attributes the increase in output signalled by respondents to the survey as possibly a result of some firms producing more in an attempt to catch up on lost production during the Level 5 economic shutdown.

Of most concern for the BER is the Employment Index, which remained “particularly weak and, unlike demand and activity indices, has barely recovered from the sharp plunge in April”. It says the indicator suggests further job losses are likely.

Old Mutual Multi-Managers investment strategist Izak Odendaal says the US and Europe growth data give us a good idea of the economic damage caused by Covid-19 and that we can expect to see declines of a similar magnitude when the South African data is released next month.

He points out how much the Great Recession of 2008/09 pales in comparison with the record-breaking 32.9% and 40% declines in GDP experienced by the US and the Eurozone in the second quarter (see graph below). 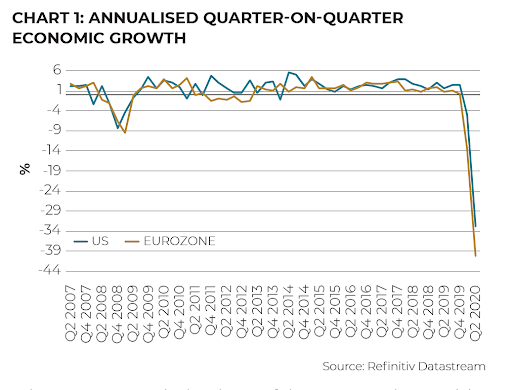 The 12.1% quarter on quarter decline in Eurozone growth, which translates into the 40% annualised rate, is the largest on record. ING says: “While GDP has already started to climb thanks to reopenings, a V-shaped recovery is wishful thinking.”

The banknotes that the declines in GDP have been relatively similar between European countries, with Germany, France and Italy all showing between 10% and 14% GDP declines.

“There is one worrying outlier though, which is Spain,” it points out, predicting that the southern European country may be set for a prolonged slump.

Both Oxford Economics and Fitch Ratings warn that outlook for the global economy over the next few years is subject to considerable downside risks. Fitch expects the impact of the coronavirus recession to “continue to be felt for years to come, with GDP levels in the largest advanced economies expected to remain around 3% to 4% below their pre-virus trend path by the middle of this decade.”

Fitch warns that repeated waves of new infections and renewed nationwide lockdowns could result in “a very sluggish recovery”. Medical breakthroughs, however, could result in a rapid normalisation of economic activity though, the rating agency adds.

Oxford Economics warns that despite a strong initial bounce in the global economy, the renewed Covid-19 infections, “high unemployment and surging corporate debt will limit the scale of the revival in the second half and beyond.”

In South Africa, the economic prognosis appears even direr. Business for SA (B4SA) last week published an assessment of the local economy that predicted it would take a minimum of two years for the economy to recover to pre-Covid-19 levels. Martin Kingston, head of the economic workgroup for B4SA, adds:

“We also expect the infection rate to have a long tail-off and for the virus to remain a reality of daily life for up to two more years.”

The organisation’s economic model puts the local economic contraction at between 8% and 10% this year and points out that a one percentage point move in the real GDP growth rates leads to an almost equivalent move in the employment rate.

The OECD, in its recent comprehensive analysis of the state of the South African economy, notes that the pandemic has added to the country’s long-standing challenges and lays out two possible trajectories for South Africa based on whether the economy experiences a double-hit or a single-hit scenario. 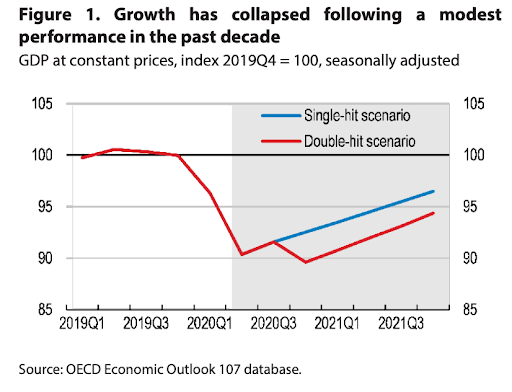 The double-hit scenario incorporates a new outbreak that affects South Africa, with its trading partners curtailing exports. In this event, the recession would deepen to -8.2% this year, it predicts, and limit the 2021 recovery to just 0.6%. The alternative single-hit scenario, where a second wave of the virus is side-stepped, would see growth fall by a still steep 7.5% but recovering to the point where it delivers growth of 2.5% in 2021.

Both scenarios would be painful for the economy and thus the OECD puts forward a range of measures that it believes should be put in motion to improve the quality of, and access to, healthcare and to support businesses and people. These include “lowering interest rates; providing temporary financial support to households and businesses; and extending financial relief in sectors hard hit by the crisis, particularly if there is a renewed virus outbreak later in the year”.

It gives focused airtime to the South African tourist sector because it has been so hard hit by the pandemic. It notes that the sector has “good potential to contribute to the economy and future employment growth”. Measures the OECD believes should be implemented to boost the sector include implementing electronic visa programmes for emerging target markets and increasing the number of countries falling under the visa-waiver agreement to boost arrivals. It also advocates reducing red tape and the regulatory burden for entrepreneurs and small enterprises to improve market access.

All in all, the second-quarter economic news in key developed markets has been poor, but not surprising. Once South Africa’s growth rate is revealed, it will give us an indication of how badly affected the economy has been and will hopefully prove to be the deepest point of the recession.

However, given the lags in data releases, it will still take some time to get a true sense of how far along we are in climbing out of the Covid-19 hole. The pace at which infections have raced through 16 million, then 17 million and now 18 million total global infection rate levels in less than a week are cause for grave concern. BM/DM

Twenty lessons in 20 years: Lesson One – Am I really an entrepreneur?