Nathi Nhleko on Zimbabwe Rendition: Waffle, verbiage and still far from the truth 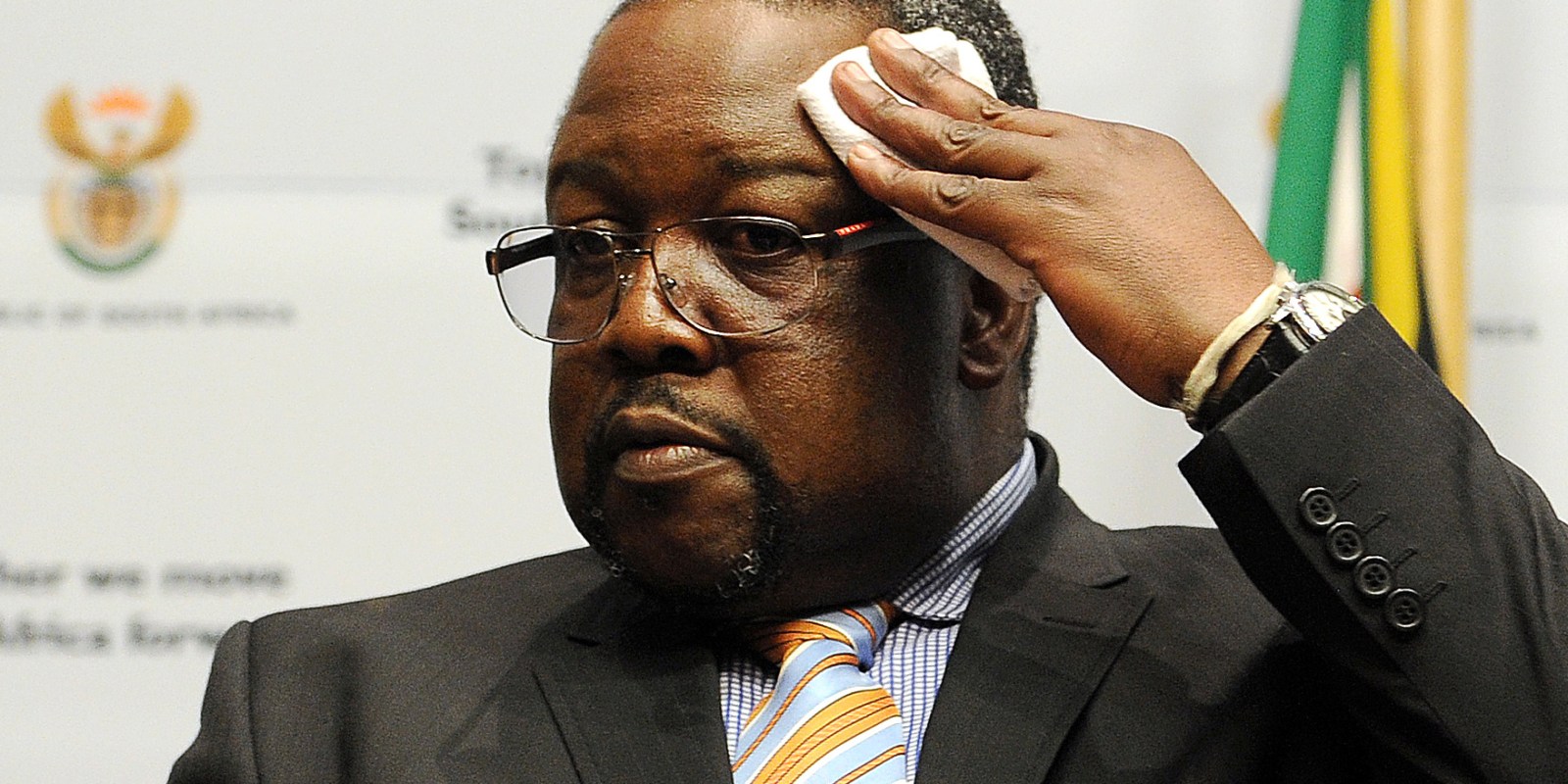 Former police minister Nathi Nhleko has formulated a theory about being stopped by the traffic police and how to frame such an event – ‘conceptually’ of course – in the greater scheme of State Capture and wrongdoing.

On Wednesday 29 July the former minister of police Nathi Nhleko spent a third, long day at the Zondo Commission of Inquiry into State Capture answering to allegations that he was a not-insignificant cog in a larger wheel which captured the criminal justice cluster during his term under Jacob Zuma.

Nhleko, who will be remembered for his spectacular defence of Zuma’s “fire pool”, is an expansive and confident waffler. So much so that Zondo, during all three days of Nhleko’s evidence, attempted to shimmy him along to get to the “meat” of questions being asked.

On Wednesday, responding to a query as to why he had suspended IPID executive director Robert McBride, or what it was that McBride had actually “done wrong” with regard to the “Zimbabwe Rendition” matter, Nhleko drew on a version of his old “traffic cop” theory.

The former minister explained to Zondo that McBride’s recommendations in a second IPID report that Hawks head Anwar Dramat and Gauteng Hawks head Shadrack Sibiya be exonerated were merely “an opinion” and not fact.

“Look, if you go out here in Joburg and you cross a red robot and a traffic officer will stop you and tell you this is a violation of crossing a red robot, then that is not a view,” he tried to school Zondo.

The story about being stopped by the traffic cops had been deployed once before by Nhleko, in March 2016. It happened during a heavy-duty press conference at the peak of the hounding of Pravin Gordhan by the Hawks and the unit’s then-boss, Berning Ntlemeza, with regard to the “rogue unit” saga.

Attempting to explain why the timing of the charges against Gordhan was “not political”, Nhleko offered this explanation to a packed media room:

“Now, when you come from different offices as a journalist, the fact of the matter is that it is possible that, before getting here, you might have crossed a red robot or traffic light. Therefore it would be strange to expect that a traffic cop shouldn’t give you a traffic fine for a traffic violation because you were rushing to this press conference and therefore it is natural for the cop to do that.”

“Well, a police officer who sees what he or she might think is a violation of the law might come to you and say, ‘Why are you doing this?’ And if you maybe give an answer that you have an emergency, that police officer might decide that they understood, and they would not arrest you.”

In other words, a “first” “Zimbabwean Rendition” docket, originated by Crime Intelligence and later handed to IPID investigator Innocent Kuba (guided all along by CI and the National Prosecuting Authority) and which recommended that Dramat and Sibiya be suspended, might have more (or less) to it than met the eye.

At the time Koekie Mbeki had been the acting head of IPID and Dramat and Sibiya were involved in several high-profile investigations involving politically connected individuals including Jacob Zuma and Crime Intelligence head Richard Mdluli.

The meat and potatoes are bound to be served, however, when McBride returns to the commission on an as yet undetermined date to face cross-examination by Nhleko’s legal representative advocate William Mokhari.

McBride, who later took up the position at IPID, compiled a “second” report on the matter after it came to light that crucial cellphone evidence had been missing from Kuba’s first report. The second report exonerated Dramat and Sibiya.

Zondo noted on Wednesday that it was “strange” that Crime Intelligence seemed to have been involved throughout the process beyond their initial role in collecting information and handing it to “other structures” in the SAPS.

Kuba had been instructed by Mbeki, his superior, to work with a  mysterious Crime Intelligence operative, Botsotso Moukangwe, as well as the NPA throughout his investigation. However, Kuba was asked to leave Moukangwe’s name out of his report.

Kuba had testified earlier to the Zondo Commission that Moukangwe had requested him to mail all information he had about the Zimbabwe matter to a private and not an office email, raising suspicions.

Nhleko said that when he took office in 2012 the Zimbabwean Rendition matter was already ongoing, having been investigated by the Civilian Secretariat. His predecessor, Nathi Mthetwa, had referred the matter to IPID.

“My concern,” said Zondo, “is why would CI who are not supposed to conduct investigations do so in this case and remain so interested that one of their own must assist or be part, even when the investigation was under the auspices of IPID?”

Nhleko suggested Mbeki testify about this, and Zondo said she would, if only she would submit her affidavit which had taken over a year to arrive at the commission.

Evidence leader Garth Hulley attempted to probe Nhleko as to how it came about that Dramat had been suspended in 2014 before the minister had contracted the private legal firm Werksmans to investigate and make recommendations.

Nhleko said he had been privy to information from other sources including a “reference” group he had set up to look at “burning” issues in the law enforcement cluster.

These included the Zimbabwe Rendition, the “Secure In Comfort” Nkandla Report and the fitness to hold office of the then-national police commissioner, Riah Phiyega.

Tellingly, Mdluli’s long and costly “suspension”, Nhleko told Zondo earlier this week, did not appear to be an urgent matter.

Returning to Nhleko’s decision to suspend McBride after recommendations by the Werksmans report, Zondo asked the former minister: “What did you think he had done… in other words, what did you see as prima facie wrong?”

Zondo continued: “What do you say to the proposition that as far as Mr McBride is concerned he had regard to whatever he had regard to and came to the conclusion that the report that was associated with him had to contain analysis that he was happy with and recommendations he could justify.

“If the earlier report had recommendations that could not be justified, he may have felt, ‘This one will have my signature and must contain what I stand for.’ What is wrong with that?”

Nhleko: “I will tell you what is wrong. You have a report that is there, you don’t nullify, you generate another. It looks similar to the first but materially you have tampered with it. Certain paragraphs were expunged.”

Nhleko: “An investigation report is not about views.”

The thrust of Nhleko’s evidence to the commission this week has been that he merely applied the law in the interests of accountability.

However, at the end of a gruelling three days, the commission was left no more enlightened, as very little “meat” was ever got to.

It was all scratch the surface to get more surface.

The meat and potatoes are bound to be served, however, when McBride returns to the commission on an as yet undetermined date to face cross-examination by Nhleko’s legal representative advocate William Mokhari.

Mokhari has represented former SARS commissioner Tom Moyane as well as Mdluli and acted for the state in the Omar al-Bashir “escape” from South Africa in 2015. DM