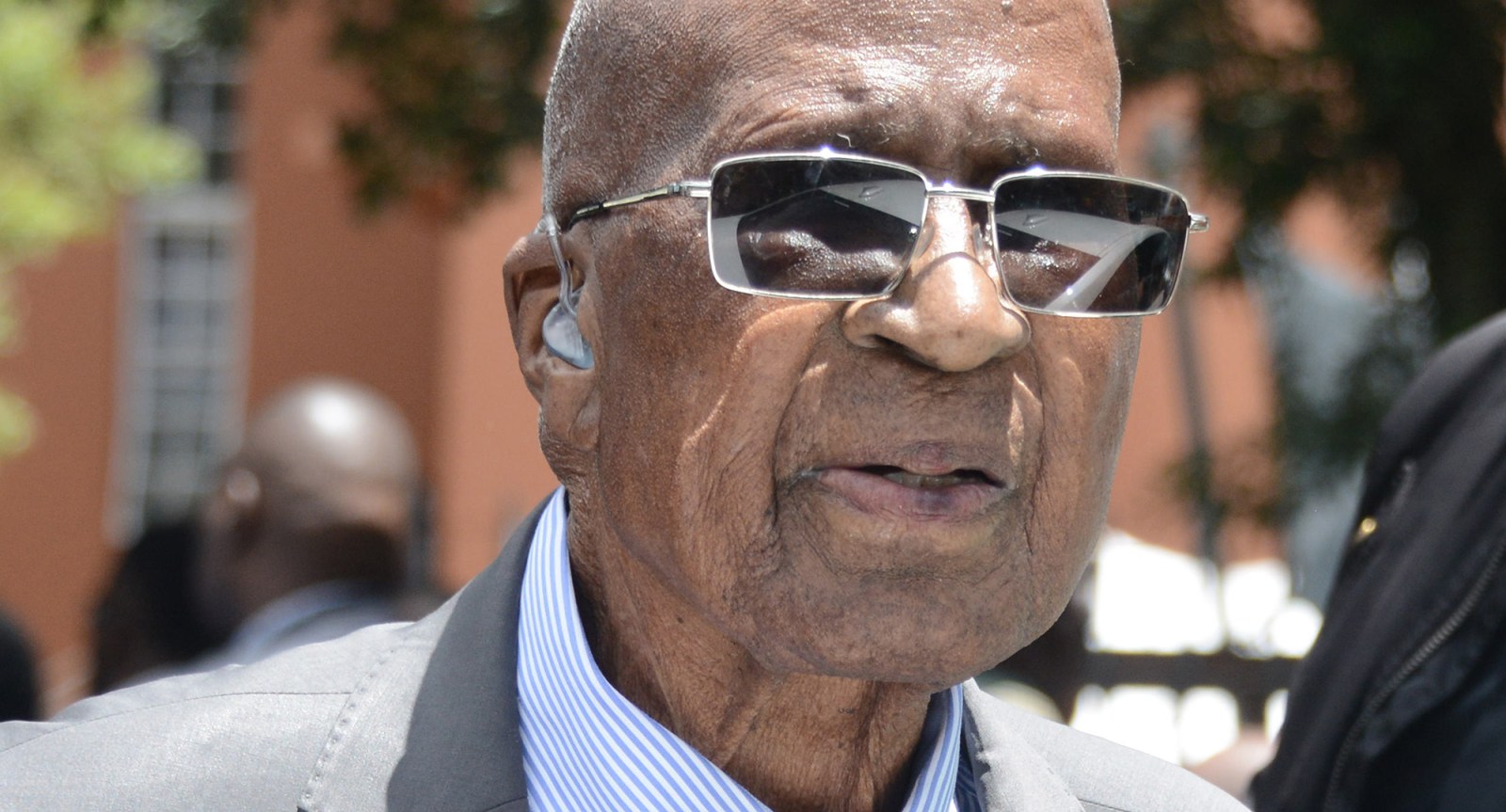 This is a summary of the trending, highest impact, and most active themes and their narratives related to social cohesion and division in South African public-domain social media conversations on 28 July 2020.

As conversation about the funeral of ANC stalwart Andrew Mlangeni spread on social media, @akreana raised questions over government’s double standards in enforcing lockdown regulations limiting funerals to 50 mourners: “The 50 people thing does not apply?” The tweet received over 4,000 likes, 1,200 retweets and 307 comments. It was a reply to Minister Fikile Mbalula’s pictorial tweet of well over 50 ANC and SANDF members attending Mlangeni’s funeral. 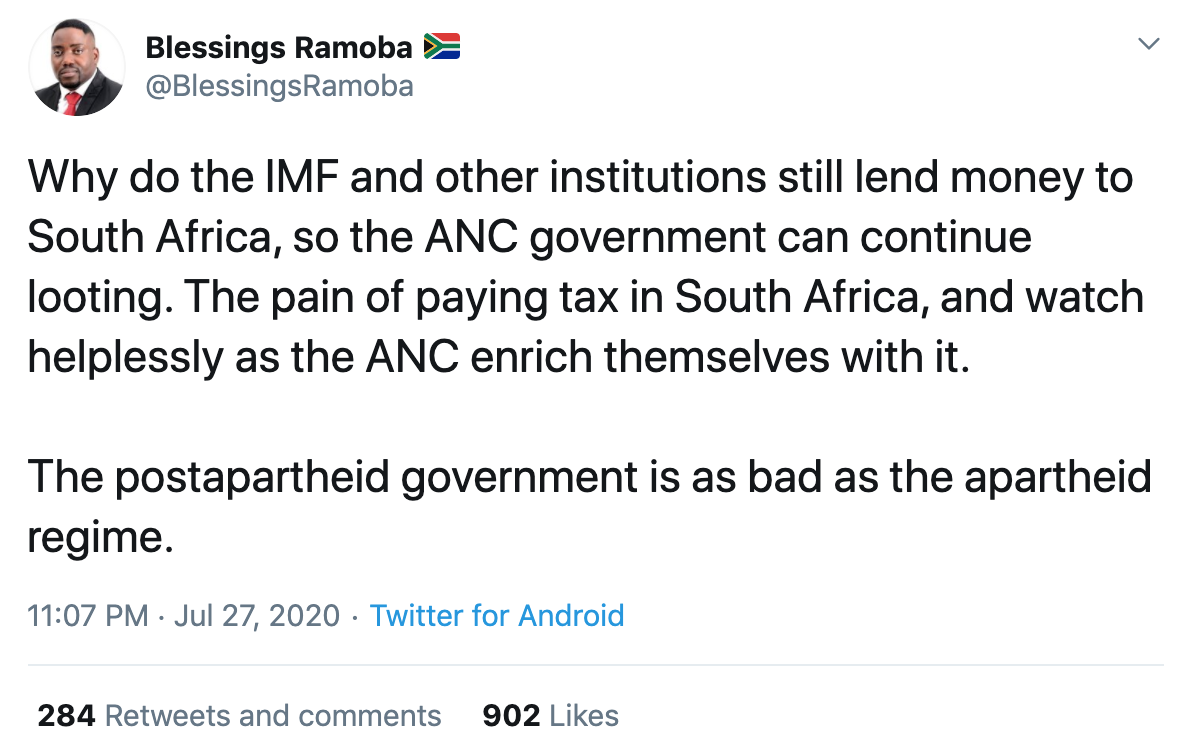 The recently announced R70-billion IMF loan to South Africa for Covid-19 relief featured prominently in social media conversations in the last 24 hours. This hot button issue prompted mass engagement on Twitter. Conversations related to this theme helped drive #corruptionmustfall to become the fourth most used hashtag for the day.

In the last 24 hours, two tweets about issues surrounding the governance of these funds gained significant traction. The most widely retweeted and commented on tweet was authored by @iamkoshiek, with 1,300 retweets and 2,800 comments. He pointed out that the IMF loan benefits from global scrutiny, leaving “no room for unexplained leakages”. He goes on to warn that “looting an IMF loan is the kiss of death for a country’s global trade”. However, @ermbates expressed concern that corruption may still ensue. The handler tweeted, “How will @GovernmentZA ensure the loan does not become yet another feeding trough for the corrupt?”  This tweet received only 100 retweets and comments and 250 likes.

This 24-hour cycle featured a number of trending posts that voiced clear objections to the IMF loan. @Lungah_ notes that before lockdown, South Africa was downgraded to junk status by Moody’s. He asks, “why would IMF borrow a broke country money?” This tweet received 1,200 retweets and comments and 3,500 likes.

@AdvoBarryRoux tweeted that the original Covid-19 relief package of R500-billion has resulted in “nothing tangible” and predicts that the R70-billion IMF loan will only “add on the already existing pain of peasants”.  This tweet received 150 retweets and comments and 600 likes.

@hostilenativ claimed: “South Africa will never be able to pay back that $4.3 Billion from IMF” and that the funds will be used to buy PPE at “1000% markup”. This tweet gained some attention and was retweeted 270 times and liked 450 times.

@BlessingsRamoba, the “Official Twitter page of the President of Mining Forum of South Africa (MFSA),” tweeted: “Why do the IMF and other institutions still lend money to South Africa, so the ANC government can continue looting. The pain of paying tax in South Africa, and watch helplessly as the ANC enrich themselves with it. The post apartheid government is as bad as the apartheid regime.”  This post received 300 retweets and nearly 1,000 likes.

@TomEatonSA authored a satirical tweet congratulating “all the Range Rover dealerships in Sandton and bankers in Dubai whose 2020 has just improved dramatically”, implying that they would benefit from the R70-billion IMF loan. This post trended with 1,300 retweets and shares and nearly 4,000 likes.

The IMF funding announcement led to a number of tweets expressing an anti-ANC sentiment. @psyQologist posted a tweet with 80 retweets and 300 likes, alleging that the IMF loan is just “ANC theft” because it does not come with structural adjustment programme conditions.

@kanniekaknie posted a similar but more inflammatory tweet that describes how the ANC has “f***ed up/broken/wrecked/looted SA” and intends to “sell us to China”.  This tweet received modest attention with 70 retweets and shares and 200 likes.

@SuperiorZulu compared the Zuma administration with the Ramaphosa administration, writing that “corruption is no longer personalised” and that “officials conducting mass looting are no longer associated with the president”.  This tweet received 180 retweets and comments and 400 likes.

The official Twitter account of former Johannesburg mayor Herman Mashaba (@HermanMashaba) posted two tweets on this topic. The first calls the situation a shame as “South Africa has no money”, and so is forced to “go and borrow expensive money to be blatantly looted by untouchable politicians”. This tweet received 80 comments and retweets and just 200 likes. The second tweet received more attention with 1,000 retweets and shares and 3,600 likes. It expresses anti-ANC sentiment and includes the hashtag #corruptionmustfall, which was the fourth highest trending hashtag for the day.

@KhutsoTheledi set the ball rolling for high reaching motivational posts at 06:40. She tweeted that you should, “Start unknown…finish unforgettable!” Her tweet was retweeted more than 130 times and received close to 600 likes.

@MsPhiona tweeted 25 signs that show you are working in a toxic environment, which included things like, ‘Bullies run the place and are often rewarded by getting ahead…Gossip is rife…there are many cliques, “us” vs “them” culture.” This post has been retweeted close to 600 times and received close to 800 likes. @koki_mash95 responded to the tweet saying, “You are describing my workplace,” while @Princessincrown added: “Yuuu I know this and well I’m still there…. Scared of starting a fresh.”

At 12:32, @Vuyo_Unchained tweeted: “You have to really learn to forgive yourself. Not just once. Again and again and again. As many times as it takes to find peace.” This tweet was retweeted more than 1,500 times and received over 4,000 likes. @lumkoh responded, saying that they have found bliss in learning to do this.

@carliejacksonnn tweeted images of two birthday cakes: one that was highly decorated with frosting and sweets, and another that was plain white with just the letters “hbd” on it. The caption read, “The love I give to other people vs the love they give to me.” This post has continued to attract likes and retweets and as of 28 July had received more than 30,000 retweets and close to 90,000 likes.

Responding to a tweet by @ms_tourist on 27 July that said, “Never marry beneath you,” @SissGugu tweeted: “No matter where life takes me, may I never view others as ‘beneath me’. May I never form bonds with people who believe that other people are beneath them.” This post has been retweeted more than 4,000 times and received close to 12,000 likes.

Commenting on how we speak to people, @Oley_Mnqai tweeted that we should, “Normalize speaking to people in a way that if they die the next day you’d be satisfied with the last thing for you said to them.” The post has more than 280 retweets and it has received close to 1,000 likes. 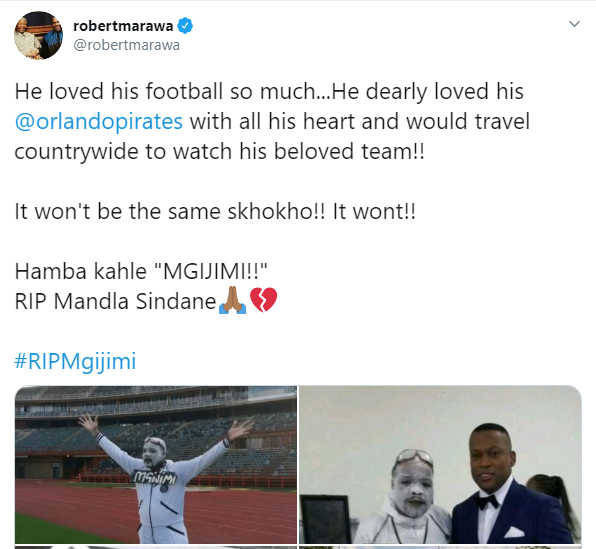 Orlando Pirates star supporter Mandla Sindane has passed away. The official Orlanda Pirates FC Twitter account, and Robert Marawa, tweeted tributes to the fan. These were widely retweeted, resulting in the RIPmgijimi hashtag being the second most used hashtag for the day. The 25-second video shared by @orlandopirates has been viewed close to 70,000 times and retweeted more than 2,300 times.

@robertmarawa tweeted, “He loved his football so much…He dearly loved his @orlandopirates with all his heart and would travel countrywide to watch his beloved team!!” This post was retweeted more than 2,200 times and received over 10,000 likes. Condolences poured in from Twitter users commenting on both tweets, as other supporters expressed their sadness at the loss of an icon. DM