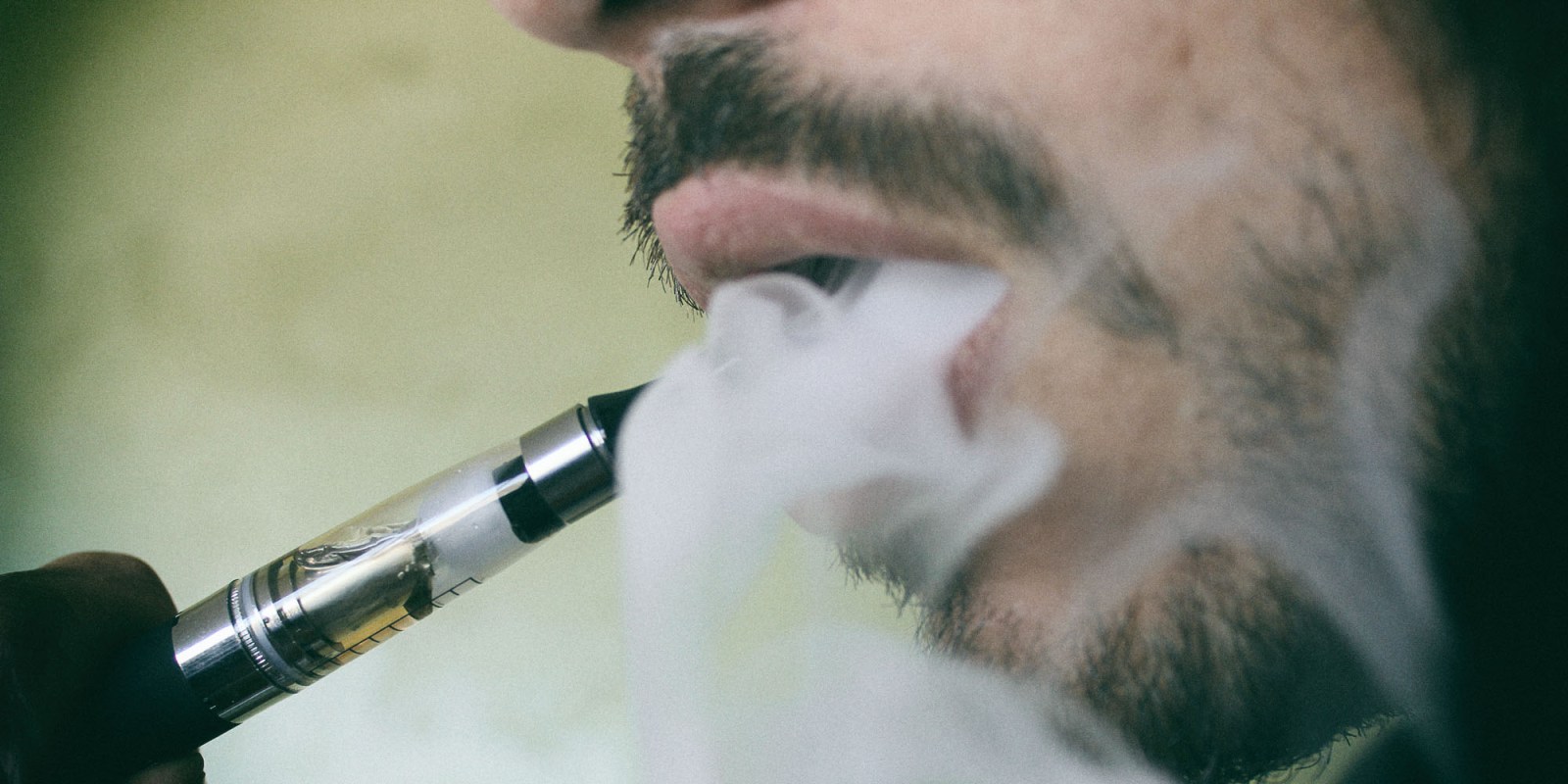 Before lockdown, the Vapour Products Association of South Africa estimates stood at about 350,000 vapers in the country, and the e-cigarette market was valued at about R1-billion. (Photo: Flickr / Lindsay Fox)

Vaping is generally regarded as a safer alternative to smoking – the lesser of two evils – but the industry is in its infancy and there are still a lot of unknowns about its health risks. Among other things, it is regarded as a route to quit smoking, but the jury is also out on that score, given the fact that many non-smoking teenagers have taken up the habit. Vaping utilises a battery device to heat liquids which can contain nicotine, cannabis or other harmful substances to produce a vape. The devices come in all shapes and sizes, and there is a bewildering range of flavours to choose from.

In the almost four months since the Covid-19 lockdown was imposed and the sale of tobacco, and vaping products was banned, there is mounting evidence – a point of fact, a mountain of evidence – that smoking has hardly been stubbed out.

A new UCT study has found that over 90% of smokers are still getting hold of their fix at sharply higher prices. It recommends lifting the tobacco ban and sharply raising the excise or sin tax to discourage smoking while boosting tax revenues. The illicit tobacco industry has thrived for years and clearly has an extensive criminal network which has kept its products on the street. If there is an illicit market in vaping products, it is not nearly as visible, or as viable. The UCT surveys have not included vaping.

Against this backdrop, Business Maverick did the following Q&A with Asanda Gcoyi, CEO of the Vapour Products Association of South Africa (VPASA), the national umbrella group for the industry.

Q: We are now almost four months into the ban on the sale of tobacco and vapour products. Do you have an estimate on the loss of revenue and turnover to date for the sector as a whole?

A: This is merely an estimate based on the information from VPASA’s community of members, not all of whom have provided us with their financial data. However, approximately over R100-million in revenue has been lost since the first day of lockdown by the vaping industry. For the tobacco and vaping industry as per your query, reports estimate the loss at R4-billion.

Q: Do you have any estimates for the number of jobs that were lost on 27 March 2020 in the vaping sector?

A: Before the lockdown, we had an estimated 4,000 jobs in the industry and from data collected from our members, we know that close to 20% of those have been lost with the ban in place. Some retailers have been obliged to put their staff either on unpaid leave or are paying them a portion of their salary.

Q: Outlets that have been forced to close will have difficulty paying rent. Do you have any estimates on how many have to shut for good or have been kicked out by their landlords?

A: Our data shows that around 48 electronic vapour product (EVP) businesses, with 155 locations between them, have been negatively affected by the lockdown restrictions and the tobacco ban. Of these, around 34 locations are now shut, with 24 having been forced to vacate or relocate due to rental agreements. The majority of these businesses are family-run and the business is often their sole source of income. Many of the business owners have expressed their anguish about the current circumstances, which have left them emotionally drained, physically exhausted and financially distressed.

Q: Unlike tobacco, booze and cannabis, it strikes me that vapour products have no or virtually no illicit networks, not least because they have only been on the market commercially for a few years and have always been regulated, and legal. So it seems that unlike these other products, it is difficult to get hold of vapour products on the black market. (Full disclosure: I am a vaper myself and know that all my friends who smoke have been acquiring cigarettes, but I have no clue where to get vape products, nor do any of my friends who vape). Can you offer a comment on this?

A: Users of EVP are people who have moved from smoking to vaping because they wanted a less harmful alternative. Unfortunately, with the ban and the availability of illegal cigarettes, we suspect some may have gone back to smoking which obviously would mean major setbacks on the harm reduction agenda. We have seen reports of vendors who have been selling illegally, but we have not been able to verify this as VPASA.

Q: On that score: Are you aware of any studies which are being done about people who vape going back to tobacco because of the ease of obtaining tobacco products?

A: Thus far, we have not been made aware of any such studies. However, we have heard through our network of vapers, manufacturers and shop owners that people have been able to obtain illicit EVPs through friends who may have hoarded or bought products from back channels. And as mentioned above, one would think there are those who may have gone back to smoking.

Q: Do you also have estimates for the number of vapers in South Africa and how fast the market has been growing annually during the past few years?

A: Before lockdown, our estimates stood at about 350,000 vapers in South Africa and the e-cigarette market is valued at about R1-billion (roughly $69-million). The e-cigarette industry in South Africa also supports 4,000 full-time jobs. According to a 2018 study by Canback Consulting that we commissioned, South Africa’s market has grown at an annual rate of 5% since 2003. The growing demand for vaping products was expected to generate more than 14,000 jobs by 2027, with growth in related employment of 13% annually during the same period.

Another pre-lockdown study, the 2019 South Africa E-Cigarette Market Research Report: By Product, Gender, Age-Group, Distribution Channel – Industry Size, Share, Trends and Growth Forecast to 2024, predicted a compound annual growth rate of 18.6% for the period 2019 to 2024, with the sector being worth $62-million by 2024, up from the $20.7-million in revenue it generated in 2018.

Q: Finally, who is the biggest distributor here? I use Twisp myself, but I was wondering who the leading three brands were.

A: Based on points of sale, it is Twisp, Vape King and Vaperite. Twisp is one of the earliest players in the industry. DM/BM