Commodities: Signposts that help point the way to recov...

Commodities: Signposts that help point the way to recovery or recession 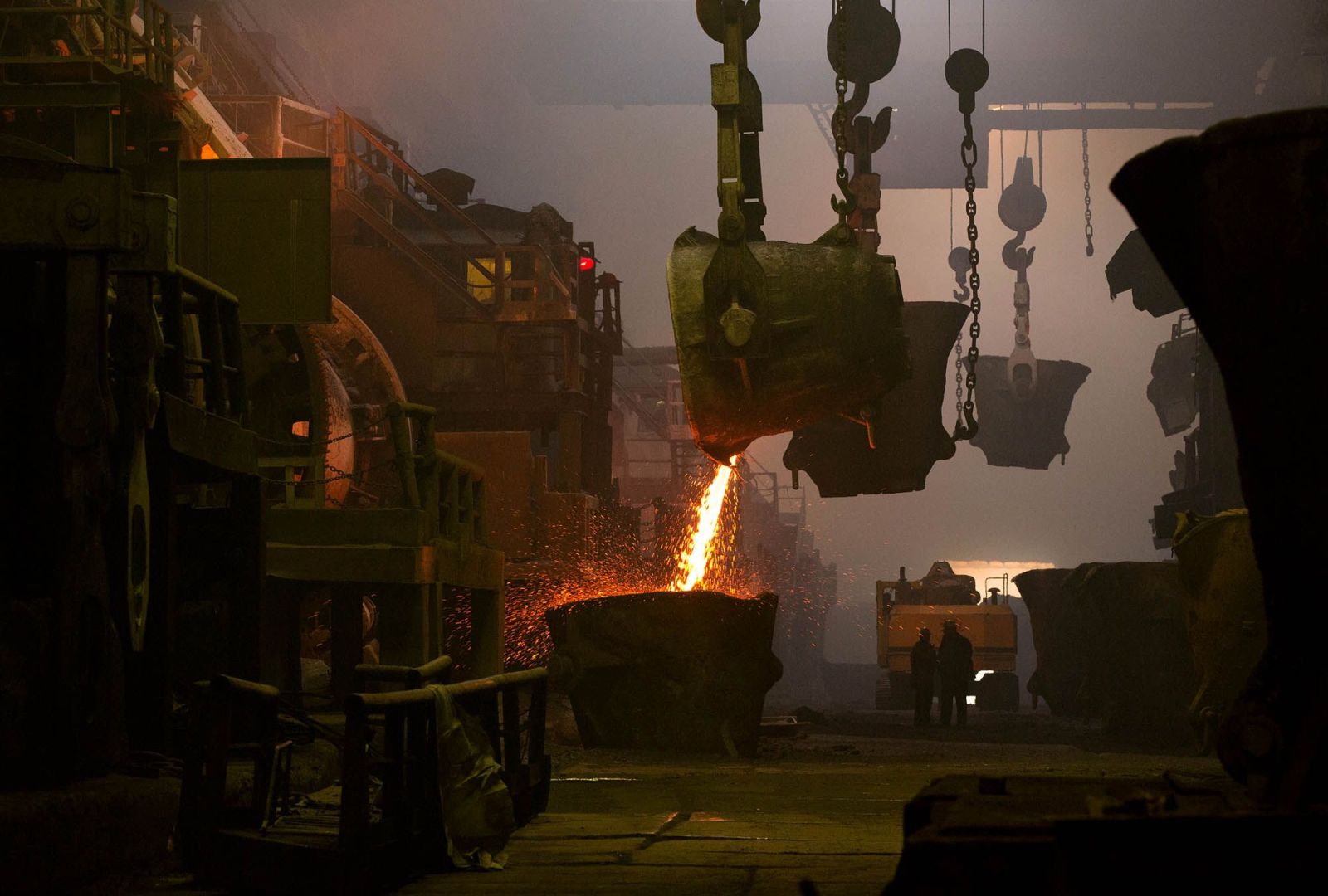 After the torrid first half of the year, which saw some commodities lose more than a third of their value and others gain a fifth, it’s hard to know what to expect for the rest of 2020. Expectations of a V-shaped recovery are dissipating by the day and success at getting Covid-19 under control is patchy at best. There are, however, some signposts that will help assess how commodities are likely to respond to challenges and opportunities as they arise.

Commodities tend to be a temperature gauge for the broader economy and for those most susceptible to changing economic fundamentals, the future looks, at best uncertain and, at worst increasingly pessimistic as Covid-19 infections continue unabated in large parts of the world.

After travelling a bumpy road during the first half of 2020, the nature of the journey ahead for commodities will be largely determined by one of two potential economic scenarios: A continued, albeit patchy, recovery in the global economy or, less promising, another recessionary period as the virus sets back expectations of the return to normal that was widely anticipated in the second half of the year.

Year to date, commodities have put in widely varied performances, with the worst performer, oil, declining 36% and the best, gold, gaining 17.4%, captured in the graph below. 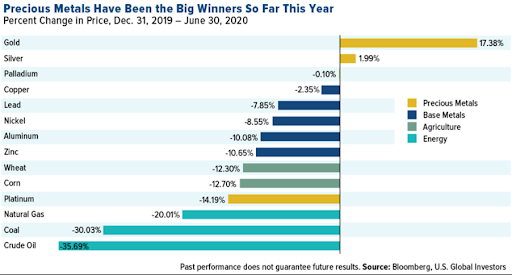 Precious metals, namely gold and silver, have benefited from their safe-haven status and predominantly sentiment-driven purchases, with gold rallying to a 17-year high of above $1,800.

Base metals, including copper and iron ore, lost ground for the period as a whole, but did experience a strong second-quarter bounce back on demand returning in addition to supply constraints after a steep sell-off in the first quarter.

The energy market dominated the headlines as the sector took the full brunt of the lockdowns, as all mobility abruptly came to a halt during economic lockdowns and sent crude oil futures briefly trading below zero in April 2020 before recovering to around $40 a barrel.

Looking forward, there is a diverse range of social, economic and political dynamics to consider when assessing how commodities are likely to behave for the rest of 2020. These include:

Global and regional economic growth inevitably have the biggest impact on commodity market fortunes. Until June 2020, hopes were still high that the global economy may experience a sharp rebound as countries got on top of the spread of the virus. However, since then the upsurge in infections in the US, Iran and Latin American countries, with sporadic outbreaks in some of the Asian countries, has made a sharp rebound less and less likely, and the risk of a Great Depression-style economy looms ever larger.

The US elections will increasingly dominate the political and economic narrative as we get closer to the November 2020 elections and the outcome will also have a significant impact on the outlook for the energy sector, not just sentiment-driven precious metals. A Democratic win could be a negative for long-term fossil fuel prices, as Joe Biden can be expected to pursue a more environmentally friendly agenda. A Republican win would likely see Donald Trump push a more crude-oil friendly future.

Also, in the lead up to the elections, Trump’s win-at-all-costs campaign has already highlighted that he is unwilling to acknowledge the extent of the problem with Covid-19 and will continue to adopt an antagonistic stance towards China in the hopes of deflecting attention away from his domestic challenges.

The impact of China on the commodity market is likely to be material in many respects. As the largest importer of many commodities, including copper, iron ore, soybeans and crude oil, its nascent economic recovery bodes well for these commodities.

However, further deterioration in US-China relations and a global economy still on its knees would cast a cloud over China’s ability to recover to pre-Covid-19 growth levels for the foreseeable future. So, there could be a ceiling to the positive impact the world’s second-largest economy would have on commodity prices in general.

Sentiment has been a primary driver of all asset class valuations, including commodity prices. The VIX Index, which is a useful indicator of the general level of volatility in financial markets, has, unsurprisingly, been exceptionally volatile during 2020. After reaching a high of 83% in mid-March 2020, the Index has ranged between 20% and 40% since late April and by mid-July 2020 had settled in the middle of that range.

However, uncertainty about how quickly the pandemic is likely to be brought under control and mixed economic successes will all impact on sentiment as and when new information arises. In volatile, sentiment-driven market conditions, precious metals stand to benefit most, given their safe-haven status and thus are likely to remain well-supported until there is convincing evidence of an end in sight for the pandemic.

In fact, Goldman Sachs expects gold to reach $2,000 against a backdrop of what it expects to be an uneven recovery in commodities.

The immense multi-trillion-dollar stimulus programmes enacted in countries around the world have provided a rising tide for asset valuations, including commodity prices, on the promise of the growth it will spur. Europe this week was close to reaching a European Union-wide fiscal package that suited all 27 nations after much deliberation about whether to provide loans or grants to struggling economies in the region.

Monetary policy measures to ease liquidity constraints have also been unprecedented. Central banks have engaged in quantitative easing programmes that have been far larger than those put in place in the wake of the 2008 financial crisis. There is an increasing expectation that the US Federal Reserve may have to engage in yield-curve control because they have run out of room to manoeuvre on the interest rate front. All these measures have undermined the attractiveness of advanced country government bonds as safe-haven assets and increased the appeal of others, namely gold and silver.

Saxobank notes that the potential introduction of yield-curve control by the US Federal Reserve “could end up being gold’s best friend”. It adds: “With the dollar punching at major support, US-China tensions on the rise and real yields moving deeper into negative territory, the foundation for a move higher is there.”

Mobility measures are proving to be an invaluable means of tracking the extent to which people are moving and economic activity is picking up again. Blackrock believes mobility is the key to tracking the virus shock. It says the pace of the activity restart depends on how successful countries are in suppressing Covid-19 as they reopen. “The pandemic’s longer-term investment implications are about changing societal preferences, sectoral adjustments, digitalisation and the relocation of global supply chains.” These statistics are also useful in assessing demand levels for fuel, and thus crude oil, as people exit lockdowns and travel around again.

With the outlook for the next six months still no clearer than when countries started going into lockdown in March 2020, signposts like these will at least offer some measure of some guidance, and hopefully comfort, of what we can expect from the next leg of the pandemic. As Blackrock says, alternative data sources will also provide a key to getting a handle on what lies ahead. DM/BM