Mantashe and Nxesi hospitalised with coronavirus, scooter clinic tender will be audited and Eastern Cape fails to update death toll 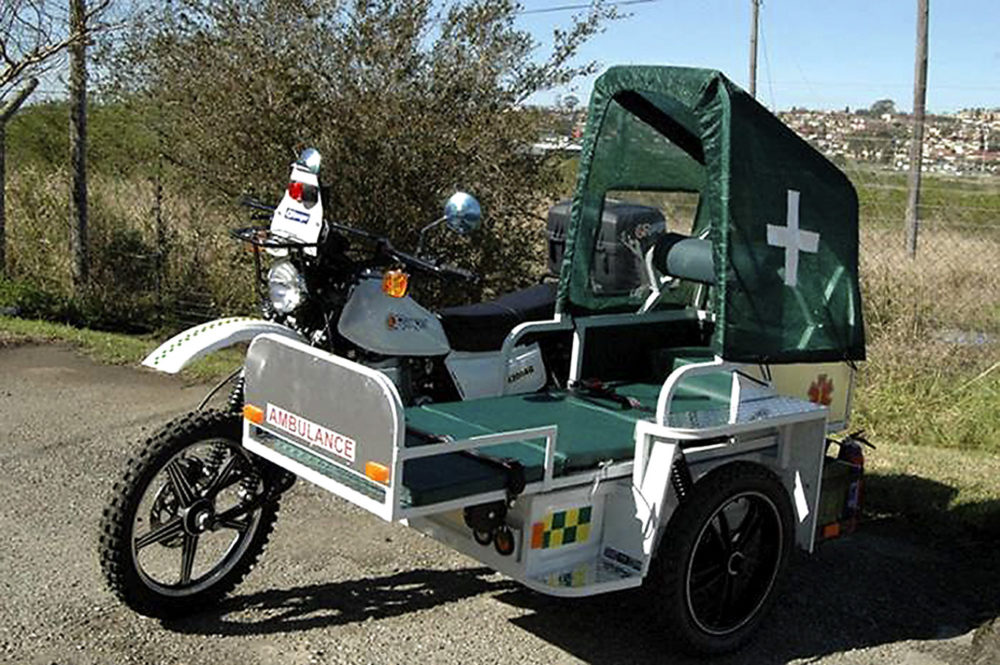 A prototype of the motorcycle and ambulance sidecar shown by the Eastern Cape Department of Health to Health Minister Dr Zweli Mkhize. (Photo supplied)

On Tuesday, it was confirmed that the auditor-general will be looking into the tender put out for motorcycle clinics by the Eastern Cape Department of Health. In the meantime, the province has not updated the death toll for Nelson Mandela Bay for 19 days. And two ministers were hospitalised with Covid-19 on Monday.

Scroll through the gallery below to view the latest Covid-19 numbers available on 21 July at the district level. All maps are sourced from provincial health departments; however, Free State did not provide an update by the time of publishing:

The R10-million tender put out for motorcycle clinics by the Eastern Cape Department of Health will be included in the national audit of money earmarked to battle the Covid-19 pandemic, the auditor-general confirmed. The tender was completed in May and a list of procurement contracts from the premier’s office stated that the project would be funded by money set aside to fight the outbreak in the province.

However, the department has since said the project will be rolled out over a few years and required the training and licensing of more than 100 health workers. The order for the scooters has been placed on hold while the national Department of Health looks into the process again.

Meanwhile, the province’s health department has not officially reported any new Covid-19 related deaths since 2 July for Nelson Mandela Bay Metro. However, the metro has recorded the funerals of 76 Covid-19 patients. In addition, three doctors working at state hospitals confirmed that about five people are dying from Covid-19 a day and their deaths are clearly marked as Covid-19 related.

As Estelle Ellis writes, this lack of reporting brings the metro’s death toll to one of the lowest in the province. Despite Ellis’s numerous requests for an explanation, none was forthcoming from the provincial department.

This has coincided with the work of a task team appointed by Health Minister Zweli Mkhize to intervene in the metro’s state hospitals. The team finished its work last week and concluded the shortcomings in the metro’s health facilities are “very serious”. Premier Oscar Mabuyane has appointed his own task team to address the problems.

A group of community healthcare workers who were chased away from the Eastern Cape Department of Health building by police last week will go back on 23 July to see the head of department, Dr Thobile Mbengashe. The group of 51 report that the police used stun grenades, tear gas and rubber bullets to remove them from the department’s head office in Bhisho.

They will return this week to continue demanding that the department employ them permanently. They have been at the frontline of the fight against Covid-19 while attending to other healthcare needs in communities. A number of civil society organisations have voiced their support for the group and have demanded the resignation of Mbengashe.

In Port Elizabeth, a truck carrying Covid-19 test samples was hijacked on Tuesday by armed robbers. The truck was abandoned 500m away from the clinic in Motherwell, but the samples have disappeared. The National Health Laboratory Services warned that no one should touch the samples but should call the city’s NHLS office on 041-395-6158. People will be contacted for retesting and there is now a test backlog because the truck could not collect samples from other clinics.

In Johannesburg, the first 20 patients have been connected to oxygen concentrators at the Nasrec Intermediate Care Field Hospital. Volunteering medical staff expect this number to increase over the next few days as Covid-19 infections surge in the city. On Monday, Mkhize said the new facilities at the hospital means no one will be turned away in the city because of a lack of beds. Shaun Smilie went on a tour and spoke to volunteer doctors about their experience at the hospital.

Meanwhile, a nurse working at private hospital Mediclinic Legae, in Mabopane, contacted Maverick Citizen to voice her concerns. She has worked at the hospital for nearly 10 years and works in a medical ward dedicated to Covid-19 care. She says patients are kept together in her ward, regardless of whether they know they have Covid-19 or not. She said staff are overworked and overwhelmed and she worries this is affecting the quality of care. In addition, she says nurses have not been provided with the correct personal protective equipment. Mediclinic Southern Africa told Maverick Citizen this was not the case. The nurse contacted Maverick Citizen again to say there had been some positive changes in the ward since the questions were posed to the hospital group’s management. Biénne Huisman reports.

On Monday, Stats SA revealed in figures the “complete collapse” of the food and beverage industry during and just after the hard lockdown. Income in the sector was down almost 95% in April and 88% in May 2020 compared to 2019. It generated R241-million in April compared to R4.5-billion in 2019. In May, the sector’s income was almost R550-million. Bar sales were down 100%. Food sales from takeaways and fast-food was down 100% in April, and then 85.7% in May. Catering services only went down 60%. Ed Stoddard unpacks the numbers. DM/MC