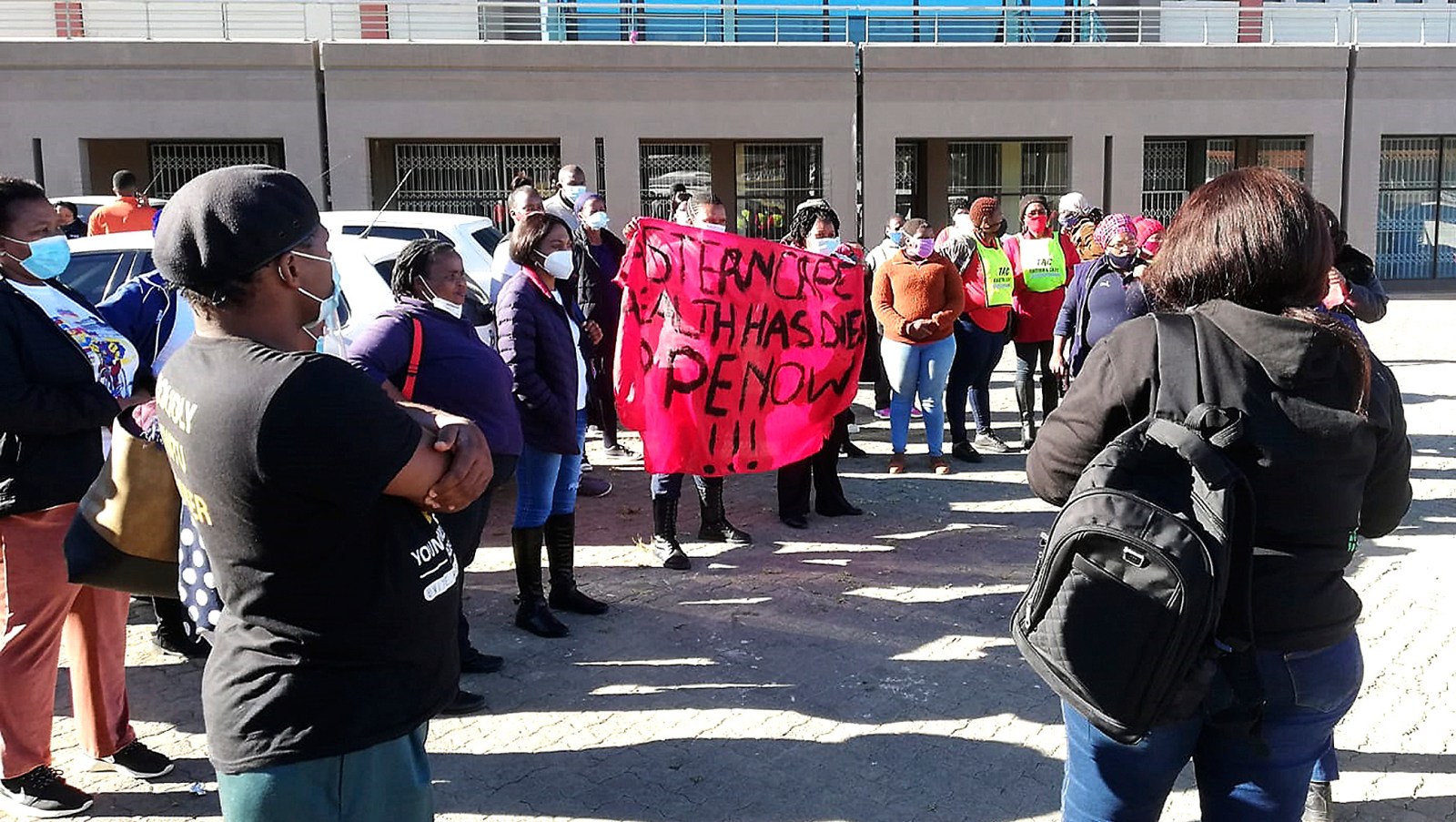 Health workers protesting at the Dukumbana building in Bhisho the morning after they were violently removed from the premises by the police. (Photo: Mzikazi Nkata)

A group of health workers who were removed from the Eastern Cape Department of Health building by the police on 16 July will return on 23 July to see the head of the department and continue their demand for permanent employment. Some have been on three-month contracts with the department since 1992.

A group of 51 community health workers who were removed with force from the Eastern Cape Department of Health’s head office in Bhisho on 16 July 2020, will return there on 23 July to continue demanding that they be permanently employed by the department.

The group, mostly consisting of women over 50 and three men, were removed from the building by police who pushed them with riot shields, fired stun grenades at them and, as some claimed, used rubber bullets and tear gas on them.

Police Captain Khaya Tonjeni confirmed the incident, but said the police only used stun grenades and shields to push the group away from the building.

Several organisations have come out in support of the community health workers and also demanded the resignation of the superintendent of the department, Dr Thobile Mbengashe over the incident.

Community health workers are currently at the forefront of the province’s fight against Covid-19 as they are performing community screenings, but they also attend to bed-ridden patients and deliver their medication, change wound dressings and assist in tracing patients with multidrug-resistant TB and HIV, who have defaulted on their medication.

Mzikazi Nkata, a health worker and a representative of the South Africa Federation of Trade Unions, who was present during the incident, said that they were consulting with their lawyers. “We had many kind offers from other organisations who have made their lawyers available to us as well,” she said.

She said they have not yet laid a complaint. “But we definitely have a case,” she added. “They can’t just open fire on us.”

Nkata added that one of their group, who lives in Uitenhage, sustained injuries to her arm and will be seeking medical help.

She said none of the officials at the department of health was taking their calls after the incident on 16 July 2020.

Ndikela Cola from the Independent Police Investigative Directorate said they have not yet received a complaint about the incident.

The group of 51 health workers went to Bhisho on 16 July to meet with Mbengashe. Their meeting was a follow-up to a memorandum that was handed to the department on 6 July 2020. Mbengashe had promised them an answer in seven days, but he didn’t get back to them. Nkata said they had an appointment with Mbengashe, but he was not at the office as he was attending a funeral.

In the statement, the organisations have called for the immediate resignation of Mbengashe “as the principal under whose watch this act has occurred”.

Nkata said they decided to sleep at the building as they did not have money to return home and come back to Bhisho the next day as many of them lived several hours away. After they were chased away from the building, she said, one of the health workers opened her home to them and they all spent the night there.

A joint statement issued by the Treatment Action Campaign, the National Association of People with Aids, the Positive Action Campaign, The South African Network of Religious Leaders Living with or Personally Affected by HIV and Aids, and the Positive Women Network strongly condemned what they called “the callous shooting of community healthcare workers that took place on Thursday night 16 July”.

In the statement, the organisations have called for the immediate resignation of Mbengashe “as the principal under whose watch this act has occurred”.

“That this act took place in a province whose healthcare system is on the brink of collapse is particularly worrying. The state of hospitals such as Livingstone Hospital (in Port Elizabeth), for instance, is a major source of concern and need to be improved urgently.

“Lastly, we reiterate our commitment to work with the State and other progressive forces in fighting against Covid-19,” the statement read.

“This incident is reminiscent of the heavy-handed treatment community health workers received at the hands of the state security apparatus in the Free State under [former Health MEC] Benny Malokoane in June 2014. They had gone to Bophelo House in order to also highlight their grievances to their principals. Comrades were vindicated after a lengthy and unnecessarily long legal process, which negatively affected them, their families and the state of health in the province. Community health workers in the Free State continue to live precariously, with the constant threat of losing their jobs hanging over them. Just over a month ago, 20 community health workers in Lejweleputswa District, who were part of the Bophelo House 94, were unceremoniously fired under the pretext that they did not have police clearance. This occurred despite their records being expunged. They were only reinstated after the intervention of activists.

“While such egregious acts against elderly women are unthinkable in a democratic state, it is further accentuated by the fact that this occurred during the Covid-19 pandemic against a defenceless and critical cadre, pivotal in this massive fight. This goes against all the pronouncements from the head of state.

“These travesties, along with the Marikana massacre, the Life Esidimeni tragedy and Aids denialism will go down as some of the greatest injustices in post-apartheid South Africa and need to be collectively criticised by all. We are resolute in stating that these were unnecessary and go against the Constitution’s promise.”

“We can no longer tolerate a situation where our state, far from being an example of good labour practice, is responsible for the casualisation of work and the exploitation of the mainly women workers who are leading grassroots healthcare provision in our communities.”

The organisations pledged their support for the demands by community healthcare workers that they be permanently appointed and that their remuneration becomes standard for the whole country.

The organisations also asked that an inquiry be opened by the Independent Police Directorate and other structures to look into the shooting.

The coordinator for the People’s Health Movement, Tinashe Njanji, said community health workers have been at the forefront of the health response to the Covid-19 pandemic in South Africa.

“Community healthcare workers are predominantly older women who work long hours, with little pay, providing vital health services to their community and yet they remain casual workers, often earning as little as R3,500 per month. Their struggle to become permanent employees, to earn a living wage and to be provided with safe work environments (including personal protective equipment) did not start with the Covid-19 pandemic. It is a struggle they have waged since 2002 throughout the country.

“While the National Department of Health and President Cyril Ramaphosa in his recent public address to the nation has lauded the work of community healthcare workers who performed Covid-19 screening for millions of South Africans … [the Eastern Cape Department of Health] has continued to abuse and exploit this most vulnerable part of the health workforce.”

He added that community health workers are not recognised by the bargaining council and have limited representation in unions, who organise in the health sector, due to their casual status and lack of formal recognition.

“We can no longer tolerate a situation where our state, far from being an example of good labour practice, is responsible for the casualisation of work and the exploitation of the mainly women workers who are leading grassroots healthcare provision in our communities,” he said.

He also pointed out that Gauteng recently offered permanent employment to the province’s community healthcare workers.

“Further, we call on all our healthcare workers including doctors, nurses, pharmacists, physiotherapists, occupational therapists, audiologists, dentists, laboratory technicians and social workers to stand in solidarity with our community healthcare workers. As we have shown our support for senior health workers who have spoken out about the injustices at poor levels of care in our health system, we should now also stand with our community health workers. We cannot build a people-centred health system or a people-centred response to Covid-19 without them,” Njanji added.

The Eastern Cape Department of Health’s communication director Siyanda Manana did not respond to a request for comment. DM/MC