Chronicle of a problem foretold: UCT Vice-Chancellor Phakeng’s ‘shortcomings’ were flagged before her appointment 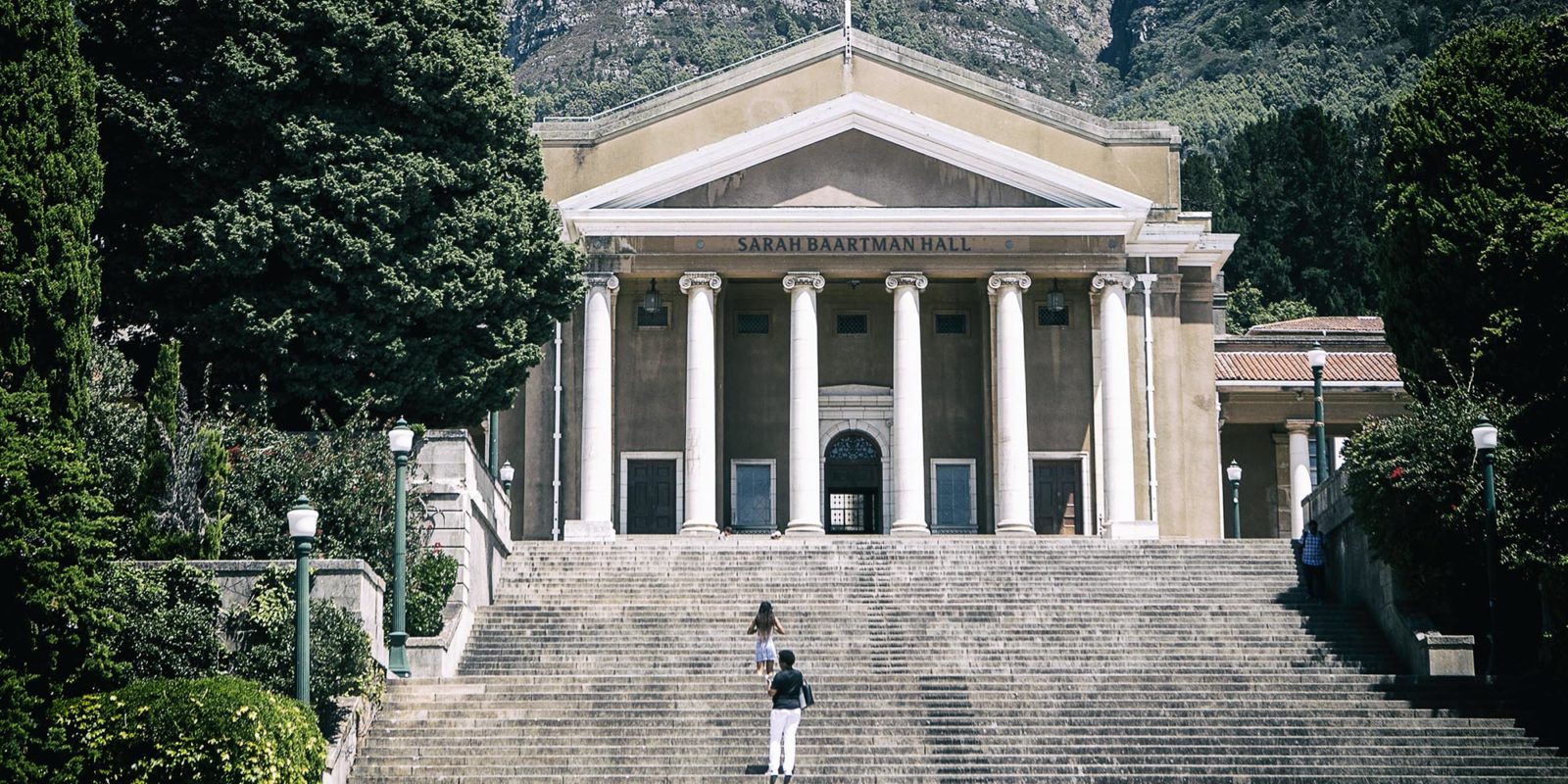 Concerns about Professor Mamokgethi Phakeng’s “leadership and personality shortcomings” had been red-flagged before her appointment in 2018 as vice-chancellor of one of the country’s top-rated universities.

Concerns about University of Cape Town Vice-Chancellor Mamokgethi Phakeng came to light in the 10 June 2020 final recommendations to the UCT Council by the outgoing chair, Sipho Pityana.

He disclosed that the UCT Selection Committee (SC), the senate, as well as the council had, before Phakeng’s appointment, highlighted her “leadership and personality shortcomings”.

However, in spite of this, said Pityana, Phakeng had stood out “head and shoulders above her competitors”.

“It was the view of the SC that with the necessary support she should be able to overcome these and serve the university with distinction,” Pityana wrote.

Rewind to 24 April 2020, where a UCT Special Council meeting deliberated on a damning 2019 report by UCT Ombud Zetu Makamandela-Mguqulwa, with regard to Phakeng’s alleged problematic and divisive leadership and which now features at the centre of a raging controversy at UCT.

Pityana reported that the council, at the 24 April meeting, and in considering the ombud’s report, had “noted” Makamandela-Mguqulwa’s “Message from the Ombud” in the foreword. It was recommended, however, that only the second part of the report be released and published.

Makamandela-Mguqulwa’s 2019 report had been unusual in that, unlike previous presentations, it had featured a complaint by the ombud herself about Phakeng.

It was only after Makamandela-Mguqulwa published her report on her website on 4 July that the matter spilled painfully into public view.

The ombud had opted to make the report public after she had suspected attempts to remove it from the agenda of a 14 March council meeting where it was to be discussed.

With regard to Phakeng’s earlier shortcomings that had been highlighted, and whatever support had been promised after her appointment, this had failed to materialise, said Pityana in his 10 June report.

Pityana wrote that, “It is our observation that her leadership and personality shortcomings have marred and have come to haunt an otherwise colourful, energetic, diligent, passionate, refreshing, impressive and highly respected Vice Chancellor’s tenure.”

The overall portrait of the VC is of a bully prone to using language, experienced, said the ombud, as “combative and violent”. She was also accused of instilling a general climate of fear and intimidation at the institution.

From Pityana’s report, it is clear that Phakeng’s leadership style continued to raise alarm in the institution throughout 2019, with a suggestion at some point that she receive help from a life coach.

In 2019, during a “360-degree feedback” and also after a tempestuous “stand-off” in the council, it became clear, Pityana noted, that “whatever assistance she [Phakeng] might have received from the Life Coach, it certainly wasn’t having the desired effect. It would appear that this facility was never used in earnest.”

And so it was after the “360-degree feedback” that the Omar Ad Hoc Committee was formed in 2019 to probe complaints and compile a report. The recommendations of this 2019 report, said Pityana, appeared to have briefly improved relations between the VC and the council at least.

However, he noted, “Relations at various levels with staff and Executive have been reportedly tense, difficult and often a source of great pain and humiliation for all concerned.”

Apart from her own complaint, Makamandela-Mguqulwa’s report revealed that 37 people had approached her office with concerns about Phakeng’s leadership style and treatment of colleagues.

The overall portrait of the VC is of a bully prone to using language, experienced, said the ombud, as “combative and violent”. She was also accused of instilling a general climate of fear and intimidation at the institution.

The newly-elected chair of the council, Babalwa Ngonyama, in her introductory note to the UCT community on 14 July, said only that the council had “noted the UCT Ombud’s report for 2019”.

The ombud’s office should not have released the report, Ngonyama added, as this had been the responsibility of the council.

“Due process was not followed in the release of this report, which is deeply regrettable,” she said.

In the two-year “journey” with Phakeng, he said, engagement with the council had been to help “understand the nature of the risk posed by what appeared to be an impaired relationship in the executive leadership”.

Daily Maverick sent a list of questions to UCT registrar Royston Pillay and the senior manager for media liaison and social media, Elijah Moholola, with regard to Pityana’s report revealing the serial concerns raised during 2019 of Phakeng’s alleged problematic leadership culture.

“The UCT Council is aware of the report of the ombud for 2019 and the related issues that have been reported in the media. There is also an appreciation of the concerns of UCT stakeholders. These important matters are receiving the necessary attention of the chair and the council, who are working to address and resolve the issues raised,” replied Moholola.

The saga began on 27 February 2020 when the ombud sent her report to the outgoing council, chaired by Pityana, and to which she is accountable. The council, in turn, forwarded it to the VC.

A week later, on 2 March, Phakeng wrote to Pityana demanding a retraction, and an apology from the ombud, while threatening High Court legal action.

The university responded that should the VC opt for this route, the institution would not carry her legal costs, which prompted Phakeng to drop the matter.

The controversy reached the next level on 6 March when the deputy chair of the council, Debbie Budlender, resigned in protest.

This was after she learnt that the ombud’s report was not on the agenda for the outgoing council’s scheduled last full meeting on 14 March.

Budlender had objected to a suggestion at a meeting four days before her resignation that the ombud’s report be dealt with in “another way”.

The ombud, said Budlender, reported to the council, and nothing and no one, including the executive or the council, should get in the way of her fulfilling her accountability duty to council.

Pityana, in his final report-back, also revealed that he, as chair, as well as Budlender, as deputy chair, had raised concerns with the VC in 2019.

“Without agreeing with the negative commentary in the 360-degree feedback, the VC understood measures to address these concerns, with mixed results.”

Processes to be followed were to be closely monitored by the chair and deputy chair with quarterly reports on progress.

Suffice to say the DVCs and COO did not take kindly to Pityana’s accusations and later wrote in response that Pityana’s use of the word “insubordinate” had been unfortunate and that as the executive, each was simply fulfilling their leadership function.

In the two-year “journey” with Phakeng, he said, engagement with the council had been to help “understand the nature of the risk posed by what appeared to be an impaired relationship in the executive leadership”.

Pityana’s attempt at seeking methods of “fixing” differences and finding a way to “restore healthy relations” is evident in his recommendations.

However, he concludes alarmingly, that “the relations between these key Executives and the University were severely impaired and possibly threatened the governance of the institution”.

Pityana wrote that two rounds of discussions had been conducted with the VC, each of the three deputy vice-chancellors (DVCs) and the chief operating officer (COO), and also “a detailed discussion” with a “team-building facilitator”.

During these meetings, said Pityana, it was found that “in some cases [there was] a lack of understanding of some basic governance principles including authority, its limits, its exercise through influence, persuasion and/or coercion”.

Phakeng, it appears, had “welcomed this feedback” and had shown “a readiness to work with the council to restore relations of trust and mutual respect”.

Pityana pointed out what he viewed as a “tendency of the DVCs and the COO to club and caucus positions prior to management engagements”, which could be “divisive, unhealthy and potentially insubordinate”.

Suffice to say the DVCs and COO did not take kindly to Pityana’s accusations and later wrote in response that Pityana’s use of the word “insubordinate” had been unfortunate and that as the executive, each was simply fulfilling their leadership function.

On 25 May 2020, professors Loretta Feris and Sue Harrison and Associate Professor Lis Lange, as well as COO Dr Reno Morar, wrote to Pityana that their engagements with Phakeng had not “shown any improvement”.

In their interactions with the VC, they said, “we experienced the same patterns of behaviour that have brought us to the current situation”.

The DVCs and COO suggested that the council appoint a “senior coach” who would be required to be “present at all Executive meetings for the next six to nine months”.

At a council meeting of 12 June 2020, it was recommended that agreements be signed by the VC, each DVC and the COO. These agreements would see each “expected to commit to personally make these relationships work for the sustainability of our institution”.

With buy-in from the team, they concluded, “we may be able to achieve a well-functioning executive team over a reasonable period of time”.

Phakeng, said Pityana, had since given “an unambiguous commitment to her job and a determination to complete her term”.

But levels of “strain” remained and it was not inconceivable that “others might be considering their options,” he added.

“Herein lies the risk of losing capacity that the university shouldn’t, hence the need for Council to take responsibility for this agenda.”

The council, said Pityana, should draw “the hard lessons of the Mayosi episode” and while all agreed the executive was “an assembly of high-quality leaders”, no one was “indispensable”.

The council had to “unwaveringly place the interests of the institution first,” warned Pityana.

At a council meeting of 12 June 2020, it was recommended that agreements be signed by the VC, each DVC and the COO. These agreements would see each “expected to commit to personally make these relationships work for the sustainability of our institution”.

Pityana warned that anyone who sought to undermine these signed undertakings for future co-operation would face “action”.

“We recommend that there should be continuous engagement on this by the Chair and Deputy Chair, who between Council meetings should provide regular reports on this matter to external Members of Exco.”

In the meantime, of course, there are the students of UCT, a public university. There are also the 37 UCT employees who complained in confidence to the ombud.

When asked by Daily Maverick what would become of these complaints, the registrar, Pillay, referred Daily Maverick to Ngonyama’s statement, which did not touch on the matter at all. DM