Amid escalating gang violence, the City of Cape Town wages war on the poor 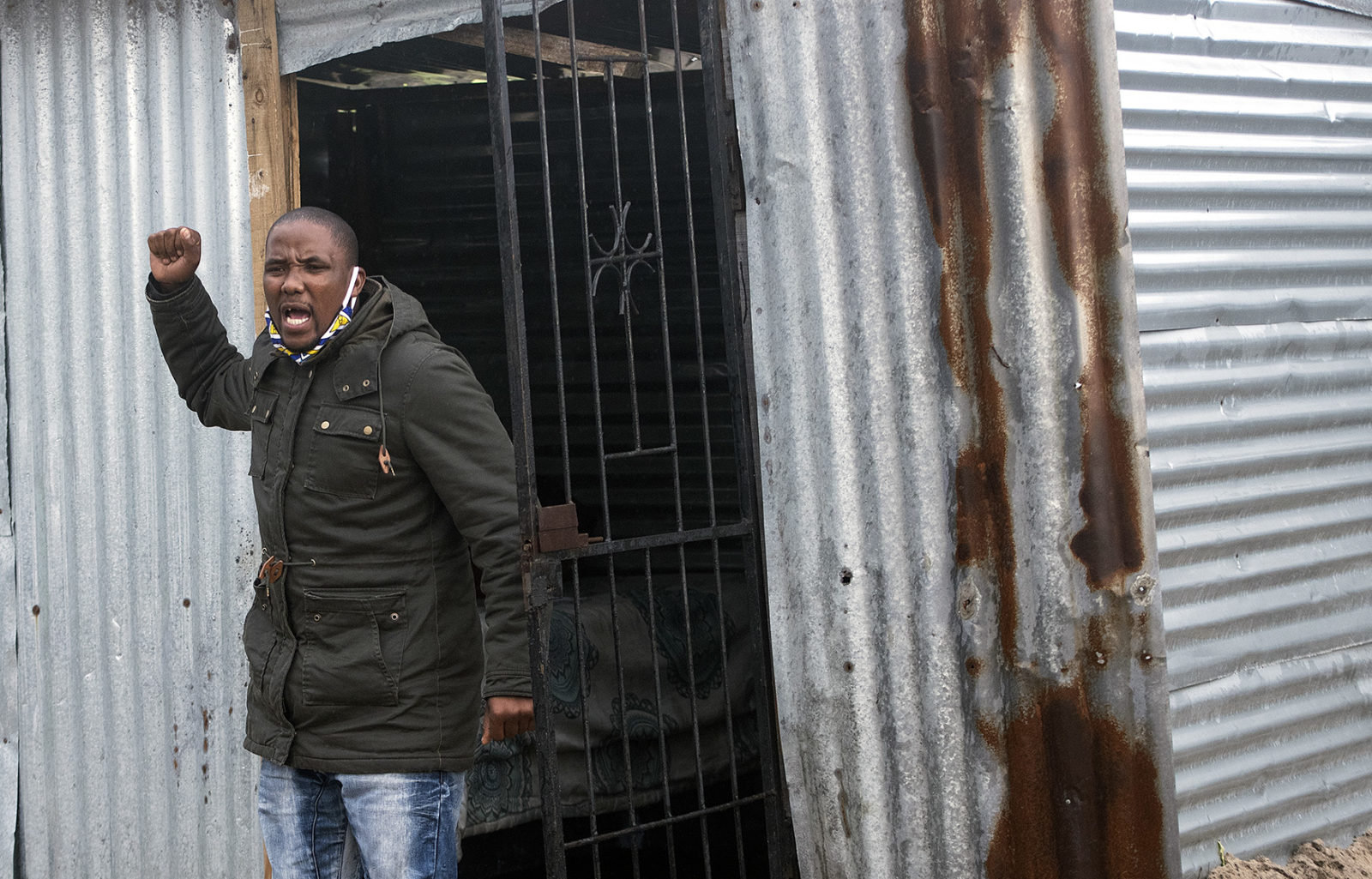 While the 2020 Covid-19 pandemic has brought its abuse into stark relief, the military power of the Cape Metro Police has been built up since 2009. How has it come about that the City’s traffic services now operate a heavily armed municipal militia whose purpose appears to be to target those who have remained poor because the City has yet to address apartheid spatial planning and its entrenchment of poverty and armed violence?

The importance of this question comes at a time when the City’s Metro Police, and Alderman JP Smith, who is in charge of the Safety and Security Portfolio on the Mayoral Committee, have made front-page news on multiple occasions because of actions taken against the poor in Hangberg, Khayelitsha, eThembeni, Mfuleni, Philippi and Driftsand.

Last week, it was for the humiliation and eviction of Bulelani Qolani in Khayelitsha. Two weeks ago, it was for the incendiary eviction, accompanied by City of Cape Town-liveried Casspirs, of a family in Hout Bay’s Hangberg fishing community. In mid-May 2020, it was in relation to the hastily abandoned court case against Human Rights Commission monitors observing the city’s Strandfontein “concentration camp” for the “homeless”. A week before that, it was for the heavy-handed Cape Metro policing of the camp itself.

While it was assault on the dignity and humanity of Qolani that finally provoked sufficient outrage for a four-hour Parliamentary investigation – although subsequently, the City has contested his account – the rapid escalation of municipal violence and the level of force deployed in the past three months appears inevitable, as there has been a steady escalation in the creation of a municipal militia in the past year. This includes the acquisition of apartheid-era Casspirs, described euphemistically by the DA as “hardened vehicles”.

The astonishment now being expressed at the levels of City-authorised violence should be read as a testimony to the lack of national oversight of city policing and the erosion of public engagement in city and provincial decision-making about what constitutes safety and security.

Tracking the path that would lead to the humiliation of Qolani requires understanding how the City has set its priorities in the past year. Going back to July 2019 – while gun murders took the lives of 43 people on the Cape Flats in just one weekend – a division of the Cape Metro Police was harassing the homeless in Cape Town city centre.

They won and an interdict was granted against the City of Cape Town by Justice Lee Bozalek, who prohibited the City from harassing or abusing homeless people and barred it from prosecuting fines levied against the seven applicants. At issue was the violation of human dignity, and cruelty of routine confiscation of cardboard to sleep on; the confiscation of sleeping bags and bags of clothing. The City invoked the “Nuisance” bylaws and Integrated Waste Management to criminalise homelessness and poverty, in terms of which the City’s Law Enforcement division of Cape Metro Police was called in.

By then, more than 1,000 gang-related deaths had been recorded and the SANDF was sent to patrol the Cape Flats after Premier Alan Winde asked the national government for help.

When did Cape Metro acquire the Casspirs, costing around R6-million per vehicle, that were used in the Hangberg evictions? What was the amount spent on ammunition for the Cape Metro Police as a whole and what proportion went to the ALIU?

Seemingly undeterred by the escalating crisis on the Cape Flats, or the court order, the City continued to harass the homeless. An application was instituted in September 2019 against Plato, Smith and the City’s Anti-Land Invasion Unit (ALIU) head Richard Bosman, requesting the Cape High Court to order them to comply with the order, find them in contempt of court and imprison them for 30 days.

In October 2019, in a classic case of addressing the letter of the law rather than the spirit of the Constitution, the contempt order was dropped after the City argued that it only applied to the seven original applicants and not homeless people in general. In his defence, Plato claimed that “neither the Mayor nor Smith issue instructions when it comes to enforcement action nor do they take enforcement action, so attempting to hold them responsible for the alleged non-compliance with the court order is illogical”.

If that was the case, where did the orders come from? Who was in charge of the CCID after a court challenge against its principals, if not the Mayoral Committee Member for Safety and Security? And where was the DA? The answer is: nowhere. Then-party leader, Mmusi Mamane had refused, months before, to comment on the official aggression facing Cape Town’s homeless. An attempt to bring a motion of no-confidence against Smith, sought by DA councillors in October 2019, was dropped at the request of DA provincial leadership.

Fast forward to the present, when, amid a global pandemic in which lethal shootings and gang violence continue to terrorise the poor, the City’s inhumanity towards homeless people continues unabated. At this point, the Anti-Land Invasion Unit (ALIU) created in 2009, accused as far back as 2011 of illegal activities but exempted from scrutiny when Helen Zille campaigned for the 2012 Khayelitsha Commission of Inquiry into Policing, has been boosted to roughly 100 staff with the hiring of an additional 40 officers in July 2019, making it the biggest unit in the City’s law enforcement operation. It works on a 24-hour shift on a rotational schedule which means the Cape Metro Police can assault shack dwellers at any time of day or night, notwithstanding the lockdown.

The escalating power of the ALIU is well-reflected in the resources it commands. In addition to its Casspirs, in December 2019, the City of Cape Town authorised a purchase of ammunition for the Metropolitan Police Services [tender #035G/2019/20], for an amount of R4,590,962.15. The same tender number appears in the March 2020 budget, in which the amount expended on ammunition is not disclosed.

When did Cape Metro acquire the Casspirs, costing around R6-million per vehicle, that were used in the Hangberg evictions? What was the amount spent on ammunition for the Cape Metro Police as a whole and what proportion went to the ALIU? Where and when was the public consulted about the municipality acquiring heavy military equipment, and when did citizens of a city that is effectively at war with gangsters agree that ratepayer monies would best be spent on preventing homeless people from seeking winter shelter?

In a twisted answer to these questions, the Strandfontein “concentration camp” was another exercise in high-budget brutality. Costing by some reports R32-million per month, the site was designed for 2,000 people, effectively costing R16,000 per month per person, an amount justified by the claim that it was a caring operation that would “keep the homeless safe”.

Yet without medical, humanitarian or financial rationale, it was quickly condemned by the public, local and international NGOs – including Doctors Without Borders (MSF) – for its brutalisation of the city’s homeless, and for increasing the risk of Covid-19 infection.

Where are the DA’s national leaders? Do they accept that the power of one individual is more important than the integrity of the party?

In her response, and echoing events at the end of 2019, Amnesty International head Shenila Mohamed found it necessary to remind the City of the basics of law: That “everyone is equal before the law, and should be treated as such, whether homeless, a refugee or a person living in poverty”. She also said: “United Nations Basic Principles on the Use of Force and Firearms by Law Enforcement Officials, among other international standards, clearly provide that law enforcement officials may only use force if other means remain ineffective or have no promise of achieving the intended result.”

In what sense can the Strandfontein operation be defended as having been in the interests of the poor, or the public? Or does it simply represent an extension of the July 2019 aggression against the homeless by other means?

In response to questioning by Minister of Police Bheki Cele about the legality and lack of accountability of Cape Metro Police deployed to the roundup of homeless people and controlling them in the camp, Smith, according to GroundUp, made the absurd claim that his operation was legal and accountable because he had – without success – asked the law to be changed to accommodate his action: “We have repeatedly asked to be included within the oversight of IPID,” GroundUp reports him saying. “It is only the failure of Cele that has caused it not to be so, by failing to amend the law we asked national government to amend years ago.”

By turning Cape Metro Police into a militarised unit that exercises brutality in violation of human rights law, the Constitution and basic human dignity, Smith is stoking conflict, not resolving it – all without addressing the real and pressing problems that Cape Town faces because of lawlessness, gun proliferation, and apparently unaddressable gangsterism in places where the poor are concentrated.

There are plenty of parallels for his decision-making in other parts of the world where the militarisation of city policing is closely linked to the defence of white privilege – and where political parties, like the Republicans in the US or DA in Cape Town, allow powerful individuals continued tenure even when they risk the failure of democracy.

The illegal and unaccountable militarisation of Cape Metro Police undermines both city and national governance.

Where are the DA’s national leaders? Do they accept that the power of one individual is more important than the integrity of the party?

Where is the national government? Is there a de facto agreement that the City of Cape Town is allowed to run a private army?

After a decade of expenditure on Cape Metro Police, why does Cape Town repeatedly witness militia-style evictions and assaults on homeless people – at the same time as a constant increase in gun and knife violence appears to go unchecked, giving rise to a situation so extreme that, “among males, intentional injuries have overtaken HIV/AIDS/TB as the leading cause of premature mortality in the Western Cape”?

Both the ANC and DA must call to order the City of Cape Town and Western Cape provincial officials who have allowed the traffic police to be militarised and turned into an army against the poor. DM

Vanessa Farr is a member of the Women’s International League for Peace and Freedom (WILPF) Academic Network and has worked with various UN organisations on militarisation and gun violence around the globe for two decades.

Lesley Green is Professor of Anthropology and director of Environmental Humanities South at the University of Cape Town.

Motheo Brodie and Sasha Stevenson • 06 MAY