PLIGHT OF THE HOMELESS 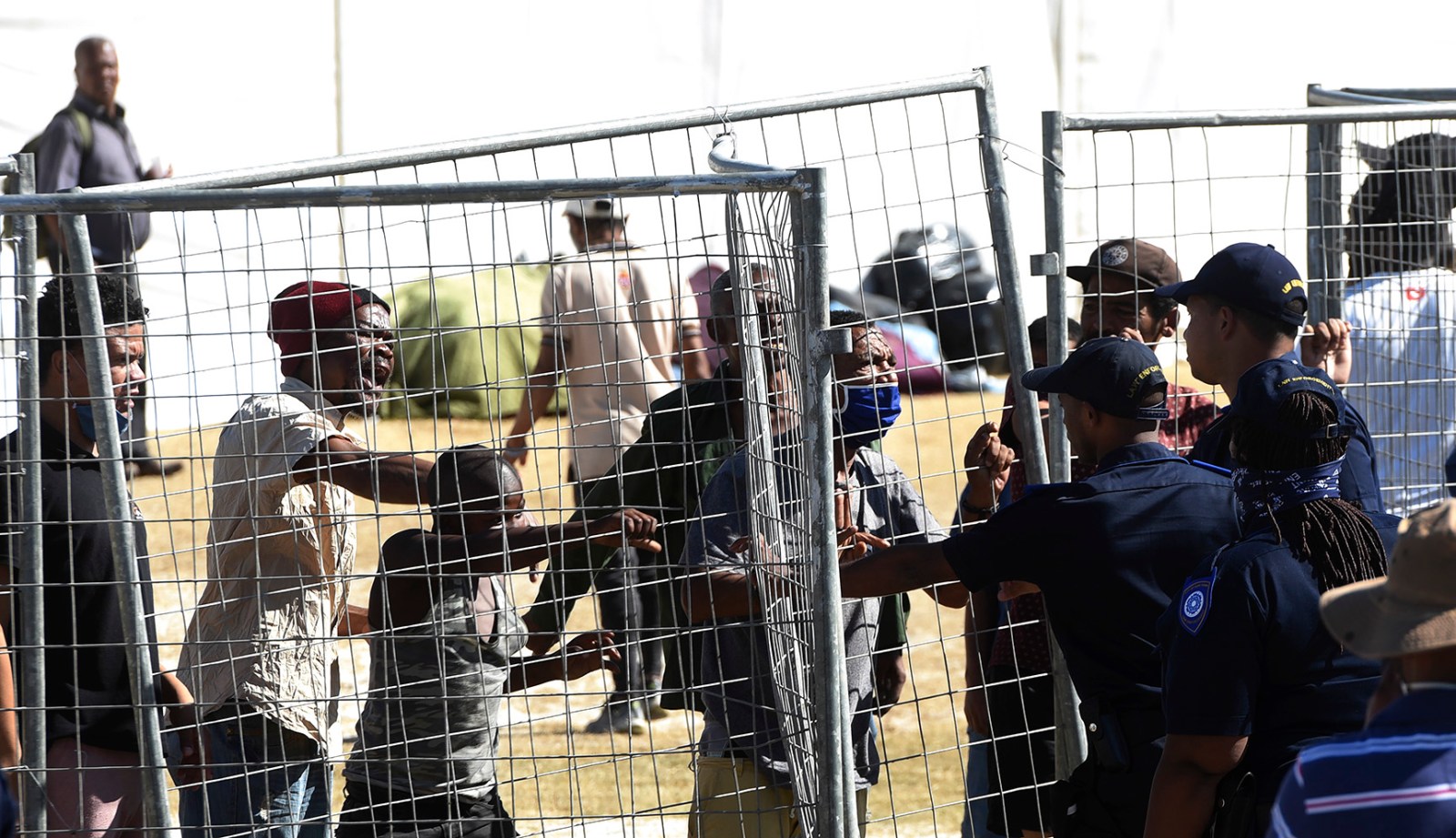 The City of Cape Town has been accused of poor planning and bad decision-making in its attempt to relocate homeless Capetonians from the Strandfontein temporary shelter. (Photo: Gallo Images / Rapport / Edrea du Toit)

The C-19 People’s Coalition, an alliance of social movements, trade unions, NGOs and community organisations has accused the City of Cape Town of attempting to spin the reality of its plans to relocate hundreds of homeless people from a temporary shelter at Strandfontein which is about to close.

Dr Kelly Gillespie, an academic at the University of the Western Cape and volunteer at the C-19 People’s Coalition, lambasted the City’s plan to relocate homeless Capetonians to a variety of shelters as being riddled with poor planning and bad decision-making. She also accused the City of ill-treating residents of the camp.

The lack of planning, said Gillespie, extended to health and safety regulations and basic care while the City attempted to project that the relocation process would run smoothly.

The City’s Mayoral Committee Member for Community Services and Health, Zahid Badroodien, on Sunday 10 May said that the City was finalising the closure of the Strandfontein temporary shelter. Badroodien maintained the City was working closely with shelters and that space had been secured at the Haven Night Shelter, Oasis Reach for Your Dream, Ubuntu Circle of Courage, Cape Flats YMCA and Happy Valley Shelter.

The City’s announced plan has surprised the South African Human Rights Commission and 10 others against whom the City has filed for an interdict in the Western Cape High Court. The interdict seeks to deny these applicants entrance to the site or “threatening” members “ or “publishing or disseminating reports relating to the site”.

The matter is scheduled to be heard on Friday 15 May.

Gillespie charged that the City was seeking an interdict against Strandfontein monitors because of “the repressive and unhealthy conditions” that had been documented and that had “embarrassed” the City’s managers.

“The monitors have provided the only means by which the people held at the Strandfontein camp could be witnessed and heard under the lockdown regulations. By bringing the monitors to court, the City is trying to cast aspersions on whistle-blowers, and to avoid accountability for its mess,” Gillepsie explained.

The C-19 People’s Coalition, a broad coalition of over 300 national organisations, entered into an agreement with the SAHRC to expand human rights monitoring capacity over the duration of the lockdown. This was done through training and accrediting monitors from civil society organisations. Some of the monitors, Gillepsie said, had been working at the Strandfontein camp on a daily basis.

Monitor Annie Kirke said she was not able to comment on the merits of the City’s application, but homeless people at the site had been “rapidly” removed and at present there are between 200 and 500 left of the 1,500 who had originally been moved to the site.

“The report we have filed and sent to the SAHRC formed part of the court documents. We have seen people leaving the site without a blanket and only with the clothes they had on. We have met people who have just been dumped by the City.

“One elderly man, 68, known as Godfrey, had a catheter. He told us it was better to live on the streets of Cape Town where he could walk to Somerset Hospital whereas at the camp he lay in pain, screamed for help and nobody came,” said Kirke.

Cape Town Mayor Dan Plato said the application would go ahead regardless of how many people were left at the shelter. He said the City was bound by the decision of the court to file founding and replying affidavits. The matter was now in the hands of the court.

Legal experts have said the application by the City seeking to interdict the officials of the SAHRC was unprecedented.

The SAHRC had a constitutional mandate to promote respect for, observance of and the protection of human rights. A scathing report by the SAHRC appears to have prompted the City into taking “the extraordinary step” of seeking to interdict the commission.

Lawyer Vernon Seymour, representing the Strandfontein Social and Economic Social and Development Forum and the Ratepayers Association, which have both sought an order from the Western Cape Court to declare the actions by the City in violation of Disaster Management Amendment Act regulations, adopted a more cautious approach.

Seymour said he had only received the City’s plan on 11 May and had met with the two organisations on Tuesday to discuss it. He highlighted that when the parties had appeared before Judge Taswell Papier earlier this month, it had been decided that the parties would have to find an amicable solution.

“The plan of the City to relocate the homeless people and close the site by 20 May 2020 is not yet final. If the Strandfontein organisations agree with the plan then an out-of-court settlement will be reached, and if not, this matter will go to court.” MC