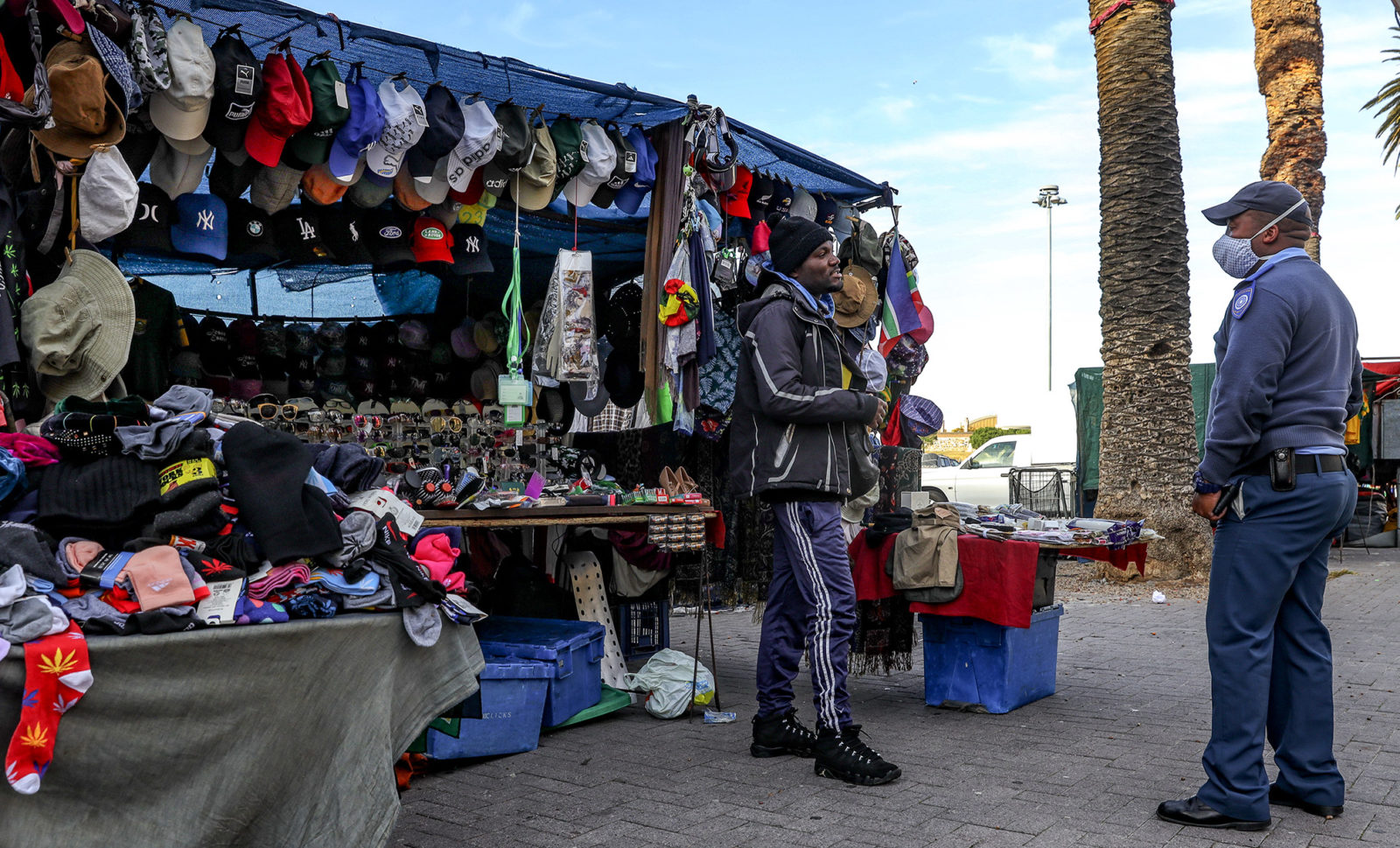 CAPE TOWN, SOUTH AFRICA - JUNE 05: A general view of informal traders doing business on the Grand Parade on June 05, 2020 in Cape Town, South Africa. It is reported that they have resumed trading after winning a court case against the City of Cape Town. (Photo: Gallo Images/Die Burger/Jaco Marais)

As Covid-19 takes hold in Africa, with rising numbers of infections, governments should prioritise the protection of Women Human Rights Defenders (WHRDs) who remain vital vehicles for social change and rights protection in the region.

The Covid-19 crisis has triggered disproportionate risks for marginalised and vulnerable communities globally and has made plain the structural inequalities built into our world. Across the globe, there has been an increase in authoritarianism and state repression in response to the pandemic, and southern Africa is no exception. Governments in the region have cracked down on dissent, activism and rights and increasingly securitised their enforcement of Covid-19 regulations. Thousands of citizens face fines, arrests, harassment and violence for violating Covid-19 regulations.

WHRDS have played a significant role in fighting against this rollback of rights. Over the past three months, my organisation, the Advancing Rights in Southern Africa Program at Freedom House (ARISA) has spoken to WHRDs from Angola, Eswatini, Botswana, Lesotho, Mozambique and South Africa and participated in regional discussions to assess the impact of the pandemic and government responses on WHRDs and their work. We found that in addition to the unrelenting nature and impact of the public health crisis, repressive government actions pose a serious threat to WHRDs and the rights of vulnerable and marginalized communities.

International human rights organisations have warned that Covid-19 measures in many countries have further restricted the space for civic activism. WHRDs in southern Africa have long faced government-backed threats and harassment in retaliation for their activism. Those who speak out are routinely subjected to arrests, threats of, and acts of violence, and gendered attacks and harassment, including online.

In the context of Covid-19, this has been reinforced by the particular effects of the pandemic on women, such as the additional burden of care, restricted access to health services, and a reduction in income for women in the informal sector. WHRDs are at the forefront of mitigating these negative effects, calling for greater women’s representation in government health responses and ensuring that women’s rights are protected. This has brought them in direct opposition to some governments and led to attacks and their exclusion from national government health responses to the pandemic.

For example, in Zimbabwe, security forces arrested, abducted and tortured three women members of the opposition Movement for Democratic Change-Alliance in May, after they participated in a citizen demonstration over the lack of government assistance for poor and vulnerable communities during the pandemic. The women were released but later arrested for violating lockdown regulations and making supposedly false reports about their abduction and torture. They spent several days in custody – putting them at great risk of Covid-19 infection – before they were released on bail.

In South Africa, attacks have taken place in the context of gendered socio-economic rights violations. Soon after a government declared nationwide lockdown in March, security forces evicted hundreds of shack dwellers in parts of the Western Cape and KwaZulu-Natal, despite a moratorium on evictions during the Covid-19 crisis. Evictions often disproportionately and adversely affect women and children. Gender activists seeking to prevent local authority-led evictions faced threats of arrest and violent treatment by the security forces. Police fired rubber bullets at scores of community members and activists protesting the evictions in the Western Cape.

WHRDs face additional barriers of economic and structural discrimination, which have been worsened by the pandemic and government restrictions. WHRDs and human rights organizations in Angola, Eswatini, Lesotho, Botswana informed ARISA that government resources for Covid-19 have failed to reach WHRDs and women’s rights organisations working in remote areas even though many are on the frontline of pandemic responses.

Organisations providing legal services for women reported a reduction in access to courts and legal information on women’s rights due to travel restrictions mainly in rural areas. Organisations have been unable to reach women who have in turn struggled to access courts for adjudication and redress.

Indigenous People’s Organisations (IPOs) and those working with indigenous communities in Angola, Botswana and South Africa have also stressed the specific effects of Covid-19 on indigenous women. Indigenous women face multiple layers of discrimination and limited access to health and other social services. Government regulations in response to the pandemic have heightened these challenges.

IPOs in Botswana informed ARISA about the lack of information on the pandemic in indigenous languages and a lack of resources to specifically address indigenous peoples’ needs. Indigenous women, who often have lower literacy rates but have the greater burden of care than indigenous men, are likely to be most affected by the dearth of information.

WHRDs have also reported that governments have failed to take the impact of Covid-19 on women’s livelihoods into account in their legislative responses to the pandemic. While various national regulations in the region have allowed for essential services, including food manufacturing and supermarkets to remain operational, informal traders – a large percentage of whom are women – have been excluded by these regulations.

Initial lockdown measures in almost all countries in the region required informal traders and vendors to vacate their trading sites. In many instances, these bans have remained largely in place, even as countries have eased their lockdowns. The bans and restrictions have impacted rural women and women informal traders.

In Angola and Eswatini, women’s rights organisations reported that many rural women farmers were unable to sell their produce and lost earnings. In Lesotho, Covid-19 regulations failed to include informal traders and rural women farmers as essential goods and services providers leading to questions of whether rural women farmers and traders could continue to operate without violating regulations. In Namibia, the City Council of Windhoek initially closed all informal markets before re-opening some informal markets under strict conditions. In Zimbabwe, even as the government eased restrictions, it retained its ban on informal traders. In one case, police in Mutare, in the eastern province of Manicaland, confiscated and burnt tons of fresh produce at the province’s largest open-air fresh food market as part of enforcing lockdown measures.

In South Africa, despite police figures indicating a decrease in reported cases of domestic violence during the lockdown period compared to previous years, calls to domestic violence hotlines increased significantly. As Covid-19 restrictive measures eased, a spate of femicides in the country compelled President Cyril Ramaphosa to condemn the rise in gender-based violence cases. Women’s rights activists have called for tougher action by the police and expressed frustration at the slow-pace of reforms to address gender-based violence.

Government-led pandemic health responses in local, national and regional Covid-19 policy and decision-making spaces have in many cases failed to reflect women’s experiences.

Although women constitute over 50% of the poor population in the Southern Africa Development Community, their views are often overlooked. There are few WHRDs or women’s rights organisations represented on national Covid-19 task forces or committees and their expertise and knowledge has not been fully incorporated into public health responses.

In Malawi, WHRDs called for equal representation of women and men in the decision making process after former President Peter Mutharika announced the restructuring of a special cabinet committee on Covid-19 to a task force in May. Only four out of the 21 members of the task force were women. Another organisation, Human Rights of Women and Girls with Disabilities (HRWGD), made a similar call highlighting the lack of women with disabilities on the task force.

In grappling with these multiple challenges from the pandemic, WHRDs are experiencing significant socio-psychological pressure. They face extra burdens of care in their homes, loss of earnings and the threat of infections in their interactions with communities. In Botswana and Zimbabwe, women journalists informed ARISA that the pandemic had added to their hours of work and placed extra burdens on their lives. This was coupled with the fear of infection due to a lack of protective equipment and overexposure to the virus in the course of their work.

The reduced public visibility of WHRDs and their reporting on rights due to Covid-19 restrictions has heightened the risk of violence for many WHRDs and further impacted their social and mental wellbeing. WHRDs reported that they felt less safe during Covid-19 lockdowns. Some reported experiencing more online harassment after they turned to online forms of activism and mobilisation during the pandemic.

However, it’s not all doom and gloom. The crisis has also led to different forms of mobilisation by WHRDS, including in responses to the crisis. Throughout southern Africa, WHRDs are providing essential services, distributing food, care packages and protective equipment to communities and bolstering government responses. They are working closely with local authorities and donors to generate awareness about the needs of the most vulnerable and ensuring that they are catered for. WHRDs have also shone a spotlight on national inequalities and inequities and engendered critical reflection by governments on the need for rights respecting and inclusive political and socio-economic reforms.

The catalytic role that WHRDs play in the region underscores the need for the introduction of government protections for WHRDs in the region that are not only representative and consultative in approach, but responsive to their multiple and intersectional needs. DM/MC

Tiseke Kasambala is the Chief of Party, Advancing Rights in Southern Africa Program.