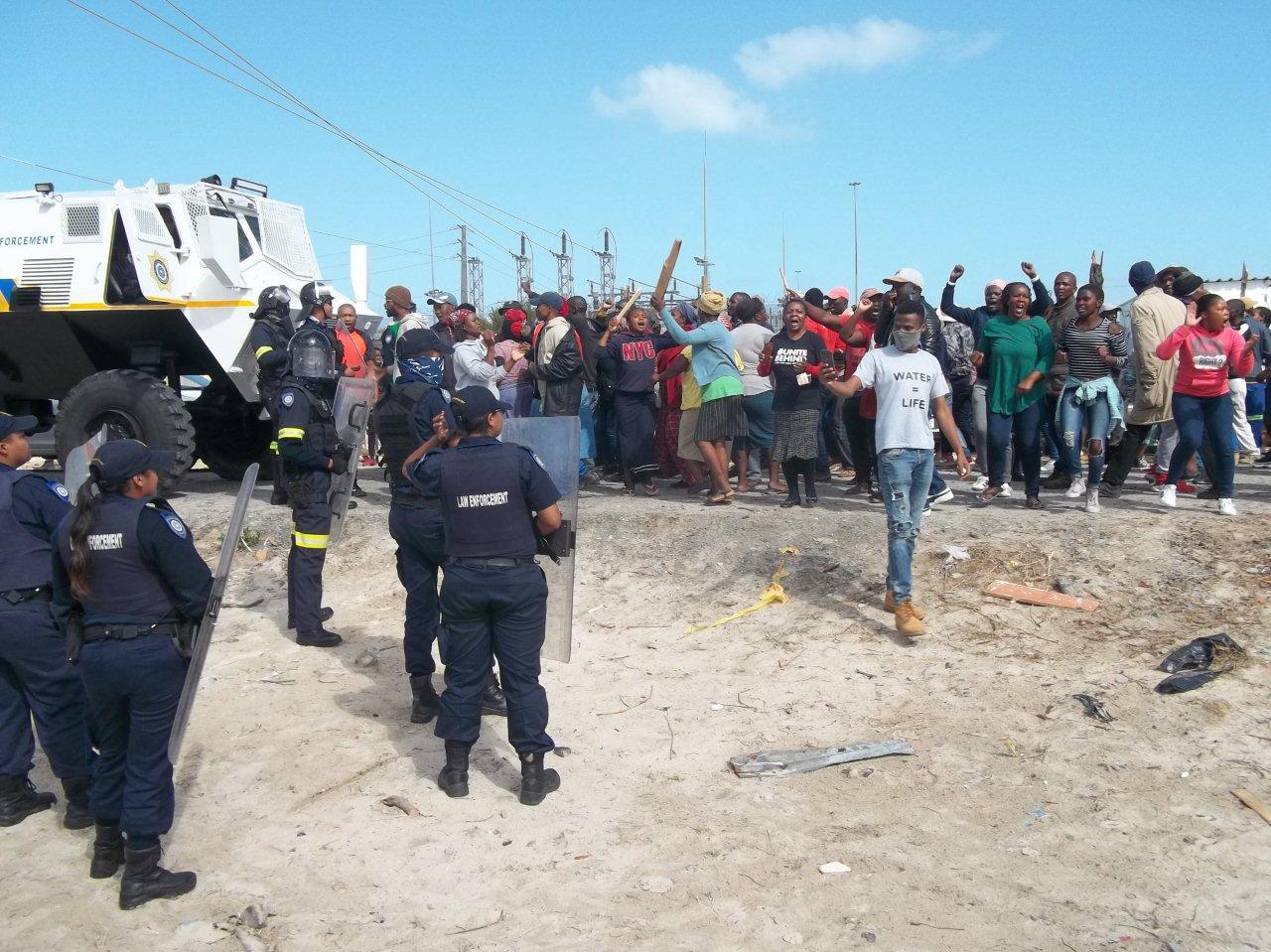 Law enforcement and protesters confront each other in Khayelitsha on Sunday. Photo: Vincent Lali

A conflict over land occupation and shack demolition during the lockdown has intensified.

City of Cape Town law enforcement officers shot at land occupiers protesting against the demolition of their shacks in Empolweni, Khayelitsha, on Sunday.

About 60 protesters sang struggle songs as they were confronted by officials and there appeared to have been no provocation when the shooting started. A GroundUp reporter on the scene for several hours did not see anyone throw a stone or resort to any violence.

Conflict between the City and the land occupiers has escalated in recent days. On Thursday last week, dozens of shacks were demolished by City workers. On Saturday and Sunday, there was further conflict.

Housing activists say a moratorium on evictions has been declared during the national coronavirus lockdown, but the City argues that this does not apply to illegal land occupations and the shacks it demolished were not occupied.

The officers used rubber bullets to disperse the protesting crowd. But Bonga Zamisa, a Social Justice Coalition (SJC) activist, said, while he was collecting rubber bullets at the scene afterwards in order to lodge a complaint against the officials, he came across a live round.

Zamisa said: “I was shocked to find live ammunition because I thought the officials were using rubber bullets only.”

SJC head Axolile Notywala said the use of live ammunition on protesters “must be very worrying to everyone”.

Notywala added: “I also saw one of the law enforcement officers pulling out his handgun and quickly putting it back when he realised I was recording.”

But the City mayoral committee member for safety and security, JP Smith, denied live bullets were used (a photo of the round was sent to him).

“We don’t have weapons to fire such rounds. It was either a plant or discharged by the SAPS. Nobody would use live ammo except rioters; our officers are shot on quite frequently these days with live ammo.”

Smith said the round appeared to be ammunition for an R4 or R5 weapon used by the SAPS and the military — but not by Cape Town metro officers.

He sent GroundUp photos showing damaged law enforcement vehicles. All officials in the pictures were wearing masks but not name tags.

GroundUp saw members of the SJC and Khayelitsha Community Network ask officials to identify themselves, to produce a court order and to name the authorities who instructed them to demolish shacks. The officials pushed them aside and refused to answer.

“The residents were not violent and didn’t attack them. They were just singing and cheering. Law enforcement shot without warning into the crowd,” she said.

Sterris said officials were swearing as they chased the shack dwellers: “Law enforcement is out of hand. We had to run for our dear lives. Even the official who seemed to be in charge refused to identify himself to the SAHRC. It’s a criminal offence to refuse to assist or hinder the commission.”

The officials dispersed the protesters and dragged three of them to a waiting van on Baden Powell Drive. Seven rebuilt shacks were torn down, along with other structures shack dwellers were in the process of rebuilding.

Thandiwe Cebisa claimed she was injured by officials as they demolished her shack on Saturday. “When they told me to vacate my shack, I asked them where they expected me to go,” she said.

Cebisa said the officials tried to drag her out of her shack but she resisted. They then decided to bring it down while she was inside. “The roof hit me on my pelvis as it fell and now my pelvis aches,” she said.

Sterris visited and interviewed Cebisa at a community church on Sunday. “We are investigating human rights violations,” she said.

The SAHRC has launched a probe into the demolition of the shacks, how long they had been in position and the legal processes followed before demolition. DM

UPDATE: Right of Response: In a statement issued by the city’s mayoral committee member for Human settlements, Councillor Malusi Booi said: “There have been a number of attempts within the City of Cape Town to illegally occupy land.  These attempts are in direct contravention of the current lockdown and COVID -19 regulations. A piece of land in Khayelitsha is currently under threat of being illegally invaded and occupied. This attempted illegal occupation is in direct contempt of a court order obtained by the City. It must be made clear no eviction is taking place and only incomplete, unoccupied and illegally built structures are being removed.

“The City has to act fairly and recognise all of the other communities who have been waiting patiently for the delivery of services. This is especially important in light of the enormous increase in land invasions across the metro over the past months.

“Some people see the lockdown as an opportunity to illegally and unlawfully occupy land without the permission of the landowner. This is concerning as it shows a disrespect for the rights of the owner but more importantly, goes against a direct instruction of the President of the Republic of South Africa.

“Similar to other municipalities, the City will continue to protect its land and will remove incomplete and unoccupied illegal structures.

“The illegal occupation of vacant land during this period may have dire consequences. These illegal settlements have no access to services which is a great concern because of the serious health and hygiene, fire, flood and safety risks. We can see the effects of illegal invasions in pockets across the metro and especially so during the COVID-19 pandemic. This has a detrimental effect on the City’s mandate to provide housing to its most vulnerable residents and rightful beneficiaries.

“The City is sensitive to the need for housing but the actions of these people are mostly opportunistic especially during the time of the COVID-19 lockdown. I ask the South African National Defence Force and the South African Police Service to assist in upholding the law during the national lockdown.

“I implore community leaders and influencers in communities to help us to drive awareness. We cannot have this situation now especially as we are trying to create healthier spaces for our fight against COVID-19. “