Unfair or unfree elections: Why are most political parties losing election petitions? 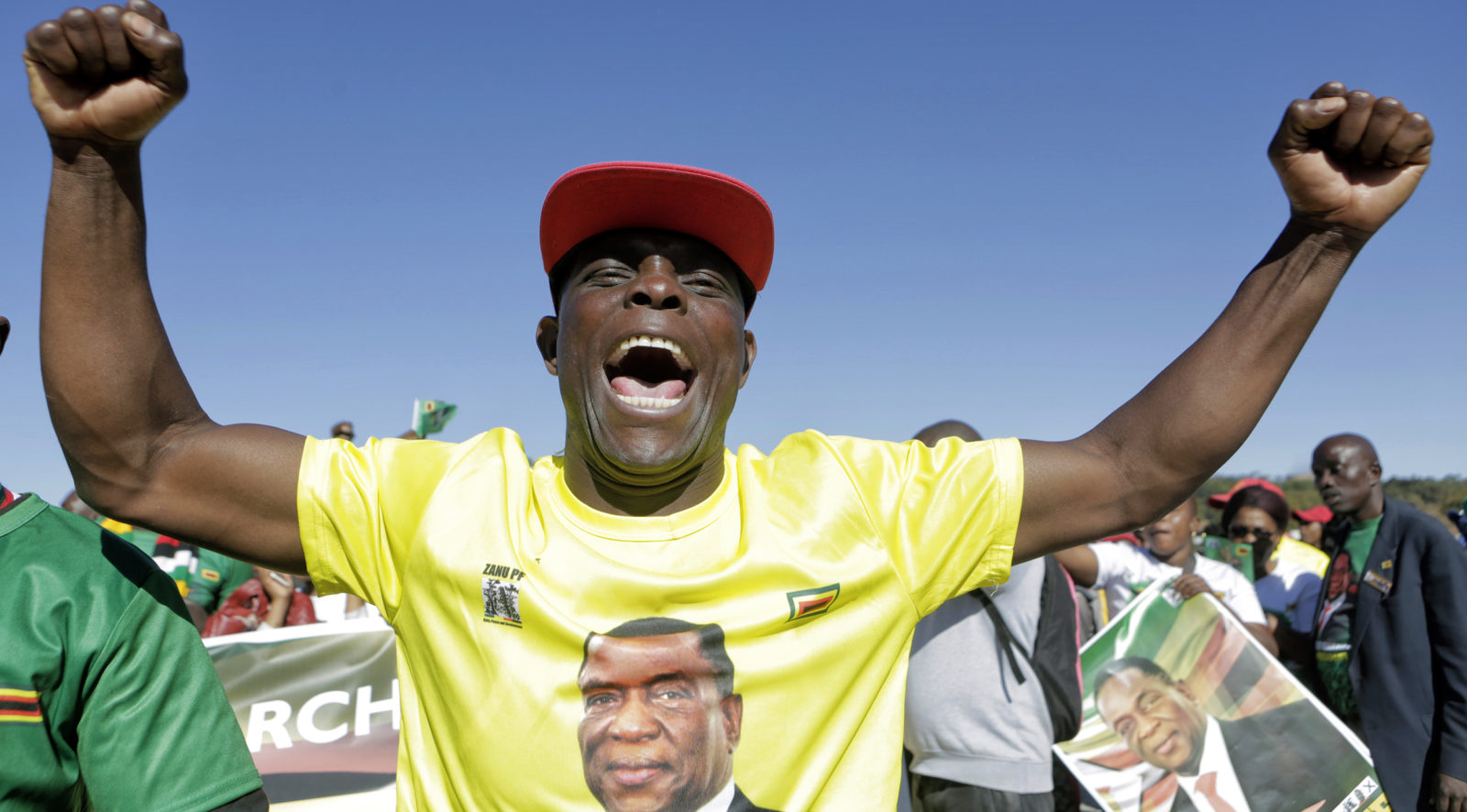 A Zanu-PF supporter shouts at a peace rally and a solidarity march to support President Emmerson Mnangagwa in Harare, Zimbabwe, 06 June 2018. (EPA-EFE/Aaron Ufumeli)

In recent years the southern Africa region has witnessed a rise in the number of contested elections arising from disputed election results.

In some cases, like Zimbabwe, this led to violent demonstrations that resulted in loss of life in August 2018. In addition, the region has also seen an increase in election outcomes being determined by the courts, for example in Zambia after the 2016 election, Zimbabwe 2018, Malawi 2020, Botswana 2020 and Namibia 2020.

Losing parties have turned to the courts seeking redress on what they claimed were stolen elections; some succeeded, as was the case with Malawi (which has just rerun its Presidential election), but the bulk have lost their cases.

Political parties in Southern Africa are often found wanting when it comes to challenging electoral outcomes with evidence-based petitions. Petitions are often half-baked, not supported by evidence of malfeasance and in some cases not properly brought/filed before the courts.

Given the centrality of free and fair elections to democracy and rule of law this is a disturbing trend particularly when elections fail to provide a vehicle that can be used to determine who governs legitimately.

This article discusses why, in most cases, when election petitions are filed by political parties they are not successful.

Does it point to the inability of affected political parties to provide evidence of ballot malfeasance? Or to mount competent court challenges, when provided with the opportunity to do so? Or does it simply point to compromised judicial systems and processes?

Political parties in Southern Africa are often found wanting when it comes to challenging electoral outcomes with evidence-based petitions. Petitions are often half-baked, not supported by evidence of malfeasance and in some cases not properly brought/filed before the courts.

This points to the inability of political parties to put in place simple but robust oversight mechanisms of the electoral process that assist in the collection of evidence needed to prove electoral malfeasance. It’s surprising that they do not seem to have the appetite, in some cases, to put in place systems that can be used to harvest information to prove allegations of election malfeasance in support of their petitions.

As a consequence, one could be excused for thinking that political parties are setting themselves up to lose elections and as such are complicit in stolen elections.

In Zimbabwe’s 2018 harmonized elections, for example, the inability of political parties to support their petitions challenging the results of the elections with the polling station return forms (V11) and the constituency return form (V23) as evidence point to their inability to harvest information availed to their agents.

Legal frameworks that are not favourable and do not provide for a level playing field negatively affect the ability of parties to file petitions. They are structured, in some cases, in ways that make it difficult to prove election malfeasance.

This raises questions on the capacity of political parties to establish and manage the operational structures required to allow for the timely codification, transmission, treatment, and analysis of all information collected by their agents in the field during elections.

In addition, petitions, in some cases, are poorly filed making it difficult for the courts to determine the basis upon which the relief being sought. For example, in Botswana, Judge Mercy Garekwe, when dismissing the electoral petitions by the opposition party, concluded that: “On the face of the petitions, it cannot be deduced that the people or institutions which allegedly committed the corrupt and illegal practices are election or polling agents, the petitions are therefore a nullity.”

It is the sickening belief and appalling fickleness of losing political parties that are endlessly furious about losing an election to assume that someone other than themselves should prove that an election was stolen from them – often transferring responsibility to either domestic or international elections observers. This is a discussion you hear every election. It’s errant nonsense, the buck starts and stops with the political parties.

Recent events in the region have provided incontrovertible evidence that this is the case. Reactions and reasons provided by political parties for losing elections have been intuitive and emotional as opposed to evidential. Parties tend to pick a weak narrative on why they lost elections often sticking to it without the heavy lifting required to make a strong case to prove elections were stolen from them.

This, however, is not to suggest that the environment is conducive to the holding of credible elections.

The chances of opposition parties winning elections are low. Ruling parties have all the resources and the state machinery to support their campaigns. Add to this that some Electoral Commissions have not helped the situation either by their failure to run credible elections or to provide accurate results. This was the case of the Zimbabwe 2018 presidential elections when the Zimbabwe Electoral Commission announced three sets of results for the Presidential election and one parliamentary candidate was declared a winner in an election he lost. The Malawi Presidential Election Petition judgement 2020 pointed to glaring issues related to tabulation, tallying and certification of results that affected the credibility of the election results.

Legal frameworks that are not favourable and do not provide for a level playing field negatively affect the ability of parties to file petitions. They are structured, in some cases, in ways that make it difficult to prove election malfeasance.

The petitioner must prove beyond a reasonable doubt that the outcome of the election was affected by the irregularity. This makes it difficult for political parties as some irregularities are difficult to qualify.

Time frames required to file election petitions are narrow and do not give adequate time for the petitioner to gather evidence to support petitions. In Zambia, for example, presidential election petitions should be filed within seven days after the declaration of election results.

Costs to launch election appeals can be prohibitive. In Zimbabwe, within seven days after lodging an election petition, the petitioner must give security for the respondent’s costs. The courts have since gone ahead and set tariffs that are on a higher scale making it expensive for petitioners.

The resolution of disputes is inordinately delayed so as to render the whole process moot in some countries. In Zimbabwe, for example, the courts are still sitting on the judgement of the 2002 presidential election petition. In other instances, the cases are dismissed on minor procedural technicalities without consideration of the merits as was the case in Zambia following the 2016 election.

Some countries’ laws do not provide for electoral appeals. Tanzania, for example, has a constitutional provision that ousts the jurisdiction of the judiciary from hearing challenges to presidential elections.

Should opposition political parties simply fold their arms and accept this status quo? Not at all! They should seek to counterbalance this unfettered position by putting in place strong robust oversight mechanisms of the electoral process that assist in the collection of evidence to prove electoral fraud.

The focus should not only be on the election day processes but processes leading up to the election that may affect the outcome of the election. This will assist political parties with evidence of unfair practices that may affect the outcome of the election. Using the qualitative and quantitative data obtained from these processes political parties can decide on whether to participate in an election, challenge or not to challenge the election outcome. Information provided by their long-term party agents can be used to make relevant interventions and advocate for electoral reforms, especially around the legal frameworks.

Besides, seeking to overturn election results, election petitions can highlight flaws in the electoral process. In Namibia, for example, ruling on the presidential election petition that challenged the results of the 27 November, 2019 election the Chief Justice Peter Shivule acknowledged that the use of electronic voting machines (EVMs) without the paper ballots to match electronic results from the EVMs was unconstitutional. This is despite ruling against the main relief being sought by the petitioners. This highlighted flaws in the elections and provided an opportunity to advocate for reforms to address this in future elections.

Properly filed petitions backed by credible and irrefutable evidence stand a chance of not only winning an election but gaining public sympathy for the political party in addition to showing how compromised the judicial system may be. Outcomes of petitions can confer legitimacy on those that emerge as winners in an election or call their legitimacy into question. DM/MC

Taona E Mwanyisa is an Elections, Democracy and Governance Practitioner. He can be reached on [email protected] Twitter: @taotami