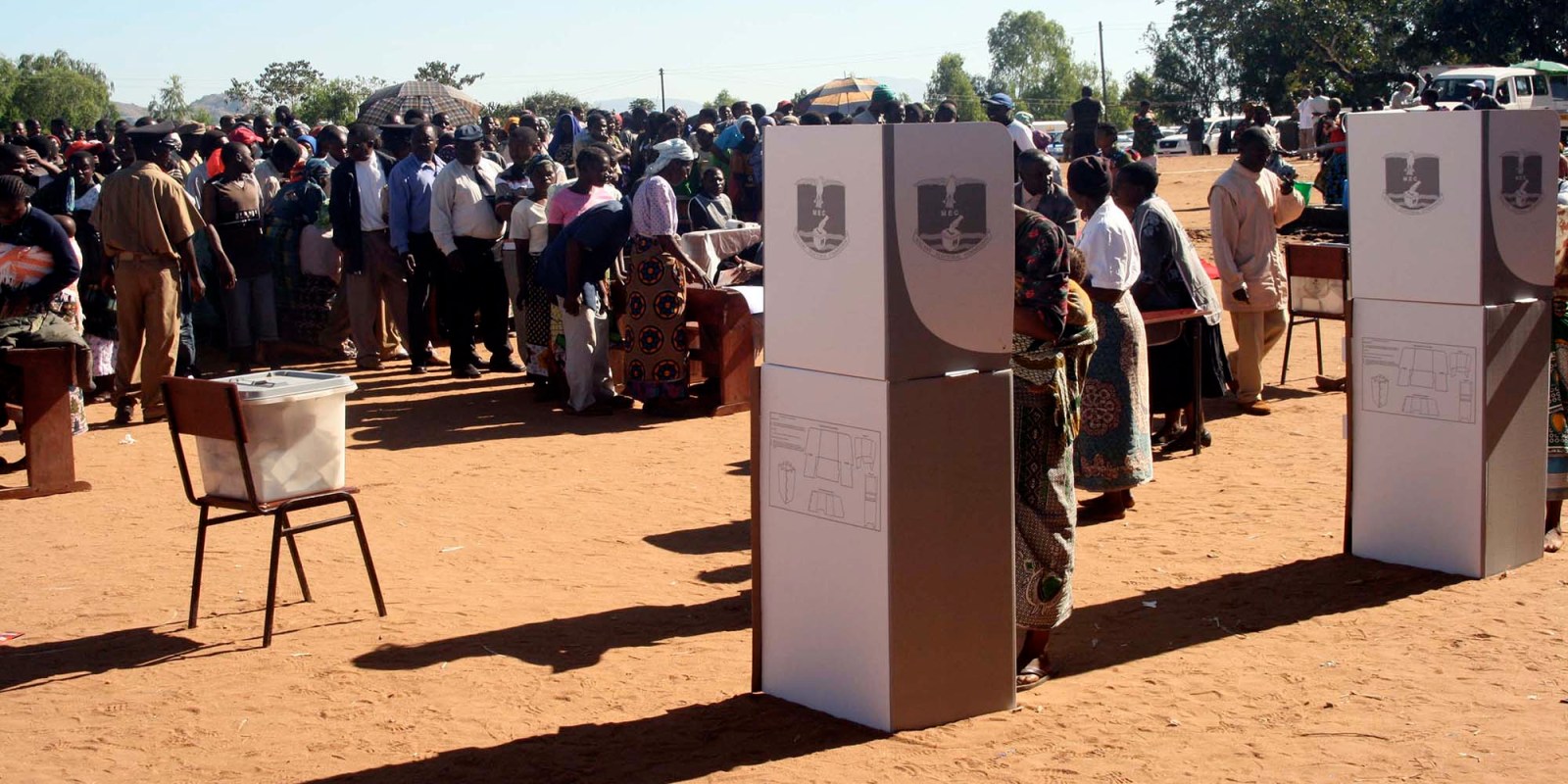 Malawians go to the polls for a presidential rerun election on Tuesday 23 June with strong indications that President Peter Mutharika should be defeated by his main challenger Lazarus Chakwera – in a free and fair election. But lingering doubts remain about whether Mutharika will allow that to happen.

The holding of the elections under coronavirus restrictions with no outside observers has also raised concerns, especially after the original election was rigged.

After the courts annulled his victory in the elections in May last year and ordered Tuesday’s rerun, Mutharika has done his best to avoid facing the electorate again. And some observers wonder if he will still try to “throw another spanner in the works”, though they said on Monday it now seemed too late for him to do that.

Some legal uncertainty – created by Mutharika himself – nonetheless lingers about how a second round would be held if no candidate attains a simple majority of 50% plus one vote. Another uncertainty about the authority of the Malawi Electoral Commission (MEC) to run the elections was cleared up at the last minute.

Mutharika raised suspicions of possible interference when he tried earlier this month to get rid of two judges who had annulled his election last May. He officially won with just 38.5% of the vote but Chakwera, the leader of the Malawi Congress Party (MCP) who officially came second with 35% and Mutharika’s former vice-president, Saulos Chilima, leader of the United Transformation Movement (UTM) who came third with 20%, challenged that result in court.

In a historic decision in February 2020, Malawi’s High Court, sitting as the Constitutional Court, annulled the elections because of extensive vote-rigging, including blatant use of Tippex correction fluid to delete votes on the ballot for opposition candidates and replace them with votes for Mutharika.

It was only the second time in African political history that a court had nullified the election victory of an incumbent presidential candidate.

The court called for the elections to be rerun within 150 days. In the meantime, Chakwera and Chilema have joined forces to form the Tonse Alliance with Chakwera as its presidential candidate and Chilema as his running mate. Mutharika, leader of the governing Democratic Progressive Party (DPP) has picked Atupele Muluzi, of the United Democratic Front (UDF), as his running mate. He is the son of former President Bakili Muluzi, who governed Malawi from 1994 to 1999.

The third candidate is Peter Kuwani.

In April, Malawi’s Supreme Court of Appeal upheld the Constitutional Court judgment. Earlier this month, Mutharika’s government tried to force Chief Justice Andrew Nyirenda and Supreme Court of Appeal Judge Edward Twea to take early retirement. Both judges, who had joined the decisions annulling Mutharika’s election last year, refused to go and have remained in office. They are challenging the move in court, with the full backing of the judiciary and the legal profession which went out onto the streets of the nation’s capital, Lilongwe, last week to protest the government’s attempt to interfere with judicial independence.

The courts also ruled that Malawi’s electoral law, which allows a president to be elected with a mere plurality of votes, was unconstitutional. It ruled that a presidential candidate must receive a majority – ie, 50% plus one vote – to be declared president.

Tuesday’s election is being held on that basis. But no legal process has been put in place to hold a run-off election of the top two candidates if no candidate wins outright in the first round. The courts recommended that Parliament should draft legislation to provide for such a rerun election and Parliament passed a law to that effect – but Mutharika refused to sign the law.

Political analyst Boniface Dulani, senior partner at Malawi’s Institute of Public Opinion and Research (IPOR) said that Mutharika’s refusal to sign the run-off legislation and the lack of any precedent in Malawi’s political history had created uncertainty about what would happen if no candidate won in the first round.

“Fortunately, Tuesday’s election is like a run-off already,” he said. That was because this was effectively a “two-horse race” as Chakwera and Chilema – who won a combined 55% of the vote last year when they were running against each other – had since joined forces to form the Tonse Alliance against Mutharika’s alliance.

Dulani told a webinar held by the Brenthurst Foundation and the Konrad Adenauer Foundation last week that IPOR has just completed an opinion poll which indicated that the Tonse Alliance would win about 51% of the vote on Tuesday – enough to avoid a run-off – with Mutharika’s alliance trailing with just 33% of the vote and Kuwani getting very little support.

The IPOR poll also found that about 85% of Malawians felt that the country had been going in the wrong direction, 57% felt the Mutharika government had performed poorly, 80% believed it was corrupt and 71% felt the Tonse Alliance was best placed to govern the country.

Last week Dulani underscored another procedural problem which some observers feared Mutharika could exploit to question the legality of the election. In its judgment of February annulling last year’s election, the Constitutional Court had also sharply criticised the performance of the Malawi Electoral Commission (MEC) which conducted those elections and officially proclaimed Mutharika as the victor.

The court called the MEC “incompetent” and earlier this month Mutharika appointed a new one – though retaining two members of the old one. However, Mutharika also appointed four commissioners who had been nominated by his DPP party and only two nominated by Chakwera’s MCP.

The likely victor, Chakwera, told last week’s webinar that “we do now have the prospect of free elections. The new electoral commission will help, the people will help and the courts will help.”

Dulani said this was contrary to the law which stipulated that the DPP and MCP should have been given three commissioners each. The MCP had challenged the appointment of the commissioners. In response, the four commissioners nominated by the DPP had initially refused to participate in the conduct of the elections. This had left the MEC with just its chair, Judge Chifundo Kachale, and two other commissioners, creating uncertainty about whether this might have an impact on the legitimacy of the commission. But after Kachale had made clear that it would make no difference, the four DPP-nominated commissioners later reported for duty.

Dulani said that after working strenuously to try to prevent the election happening, Mutharika seemed resigned to participating only last Wednesday when he hit the campaign trail for the first time.

Dulani said he could not be sure that Mutharika would “not try to throw another spanner in the works, but it seems too late”.

He added that it would be “an upset of epic proportions if Mutharika had to engineer victory. It looks like we will have a new leader tomorrow.”

The likely victor, Chakwera, told last week’s webinar that “we do now have the prospect of free elections. The new electoral commission will help, the people will help and the courts will help.”

Chakwera vowed to fight corruption and to ensure the government served the people, and not the other way round, if he were elected.

Last week former Nigerian President Olusegun Obasanjo, also a frequent election observer, took a less sanguine view of the elections. He warned in an article for Daily Maverick that the world should remain vigilant to ensure the poll was free and fair.

He criticised the African Union in particular but also the European Union and the Commonwealth, whose electoral observers, he said, had all given their approval to the elections of last year, though some with “minor misgivings.” It was only Malawi’s courageous courts which had saved the day.

Obasanjo wrote that Tuesday’s election was taking place without any official external election observer missions, because of the Covid-19 travel restrictions and lockdowns. He exhorted African and Western diplomats and other foreign representatives stationed in Malawi to “observe, gather information and verify allegations of abuses and malpractices should such be made by members of the public or parties contesting the election.

“What is of deep concern is that some governments carrying out elections during the coronavirus crisis may attempt to use the cover of the pandemic to strengthen authoritarian control and to limit democratic participation in determining the trajectory their countries are taking,” Obasanjo wrote.

Brenthurst Foundation director Greg Mills noted that the failure of the international election observers to call out the rigging in last year’s elections and the fact that the Malawians themselves had succeeded in doing so, including through their courts, was an encouraging sign that Malawians were taking ownership of their own democracy.

Konrad Adenauer Foundation South African director Henning Suhr agreed, saying that the Malawians had made the point that if there was to be any change, it should come from within. DM